As a Delta Diamond Medallion frequent flier I have accumulated several hundred thousand frequent flyer miles each year over the past decade.  I’ve used these miles for many domestic and foreign trips in economy and business class.  As a member of the Skyteam alliance, Delta offered an around-the-world ticket that could be purchased with frequent flyer miles.  The ticket allowed up to six stops and flights on any Skyteam alliance airline.  Delta, however, announced drastic changes to its frequent-flyer program in 2015, including basing frequent flyer miles earned based on the price paid for a ticket rather than distance flown and eliminating r/t/w tickets.   So in 2014 I flew 452,000 actual flight miles on low-cost fares on Delta to build up my mileage balance and reach my goal of two million miles flown lifetime before the changes took effect.  As a Diamond Medallion prior to 2015 I got frequent-flyer miles equal to the actual distance flown plus 125%.  I booked a r/t/w ticket in 2014 for 280,00 miles for flights in business class while that option was available.  At the end of 2014 I still had over one million frequent flyer miles on Delta even after booking the r/t/w/ticket.

My around-the-world trip began on January 6, 2015.  There will be 16 flights on this trip and seven stopovers.   Six flights on KE ( Korean Air) four on SU (Aeroflot) three on DL (delta) two on KQ (Kenya Airways) one on KL (KLM) and one on US (USAir).   My stops will be in Manila (MNL), Bangkok (BKK), Mumbai (BOM), Nairobi (NBO), Sofia, Bulgaria (SOF), and Lima (LIM).  In addition I was able to spend a night in Amsterdam (AMS) thanks to an 18-hour overnight layover.  The goals of the trip are to experience latin dancing venues in various countries and to see the sights  in these far-flung countries.

The first flight was from CLT – ATL on US.   It was the only flight on this trip in coach.  It is only 36 minutes of flying time so that is clearly bearable.  Most of my travel is in coach, but this trip is a splurge, and the rest of the flying will be in business class.  Although the US flight was coach, I got an exit row seat half way back and had no one else in my row.  That is fairly rare these days as flights are getting more and more crowded.  The exit row leg room on this MD 90 was actually greater than in first class.

The drawback of taking US to ATL was that I had to go to baggage claim to pick up my one checked bag.  If I had been on DL the bag would have been checked through and I could have gone directly to the departure gate in ATL.  Instead, after getting my bag I had to exit the terminal and take a shuttle bus to Terminal F where I could check in with KE for the subsequent flights.

After checking in with KE at F,  I took the inter-terminal train for the quick trip to Terminal E which is where the next flight was departing from.  KE 36 ATL -ICN (Incheon which is the highly rated airport serving Seoul, Korea) was on an A380.  KE makes the entire upper deck business class with 94 seats in 2-2-2 configuration.  I prefer the way DL does its international business class where every seat has direct aisle access.  KE’s A380s, however have a feature that more than makes up for this — a lounge a the rear of the business class section.  The seating arrangement had not been a problem on the other KE flights I’d taken because business class was only 25% full.  This flight was about 80% full in business class.

It was a beautiful day for the departure from ATL. 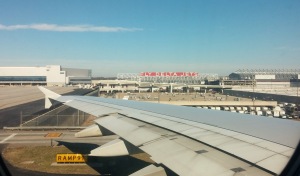 I had the window seat, 21A in the rear business-class cabin near the lounge.  The aisle seat neaxt to me was unoccupied.  I like the window seat on the A380 for the views plus there is great storage in the compartment next on the window.  This is a handy place to put stuff like glasses, headphones and newspapers and I put pillows and blankets inside the compartment.

KE provides slippers and a Davi amenity kit.  Razors and shaving lotion are available in the restrooms in business class.

The seats are lie flat with simple controls and a large video screen for movies and games.

The best part of KE’s 380s is the lounge and the KE flight attendants.  There is plenty of space to relax and have a drink or snack.  The couches have seat belts in case the flight encounters turbulence.  The FAs have a menu of specialty cocktails they are happy to fix.  I’m surprised more people don’t hang out there.  It is a good place to chat with fellow travelers.

I spent a lot of time in the lounge but returned to the seat for meals and watching movies.  Bibimbap for lunch. 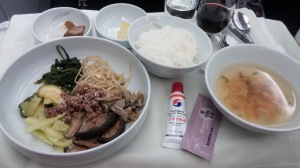 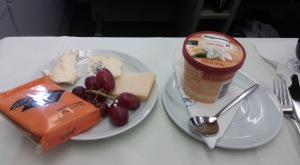 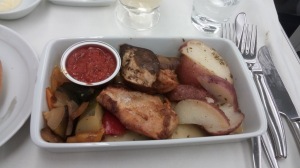 On the lower level KE has special duty free area where it displays some of the duty free items that are for sale. 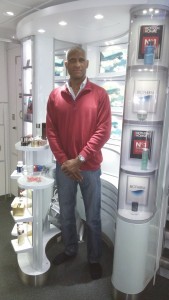 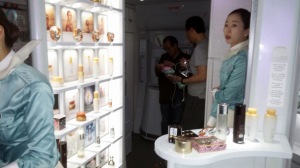 I like to use the flight following functions on the in-flight entertainment (IFE) system to keep track of the route and progress of a flight.  KE 36 took a great-circle route over the north pole and down across Russia.  Fortunately we did not meet the same fate that KE 007 did during the days of the Soviet Union.

Between food, the lounge,  and movies I even managed to get in a couple of hours of sleep.   We arrived at ICN at dusk.  I always wonder which of the many islands below is Womi doh, the key island to be seized in  McArthur’s brilliant Incheon landing during the Korean War. 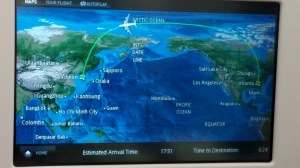 ICN is one of the best airports in the world.  Although it is huge, it is modern, clean and very easy to navigate.  It has great restaurants, shopping and services.