The festival was being hosted at the Paradise Garden Resort.  I had not booked my Boracay hotel when I arrived in Manila.  I wanted to see where others were staying.  Most were staying at the host hotel.  When I checked Agoda, the reviews for that hotel weren’t very good.  In fact reviews for many hotels on Boracay were surprisingly unfavorable.  The advertised rate for the Paradise garden also seemed high, about $179/night.

I looked at other properties hoping to find something cheaper, with good reviews and with free wifi and a fitness center.  The best I could do it seemed was the Sundown Beach Studios, a hotel on the beach that was only slightly cheaper but that had free wireless wifi and very good reviews from Agoda customers.  No fitness center unfortunately.  On the Agoda map, it appeared that it was very close to the Paradise Garden Resort.

I have at times been disappointed when I have selected hotels based on the photos and information provided on hotel booking sites.  This was not one of those times.

Sundown Beach Studios is a four-unit, beach-front villa that is run by Germans and primarily caters to scuba divers.  I arrived at 8 in the morning before the scheduled office opening at 9.  One of the German scuba instructors was sitting in the open-air restaurant on the ground floor and we chatted while I waited for the office to open.  I was feeling tired from the boat trip and lack of sleep, so I was pleased when Jurgen, the owner, appeared at 8:30, checked me in, and had the porter show me to my room.

The room was even nicer than I had expected.  The view from the terrace was awesome.

The room was spacious and smartly decorated. 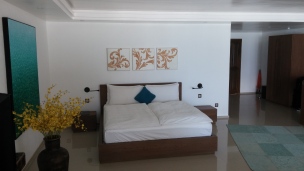 The bathroom was also large with a clean, modern look. 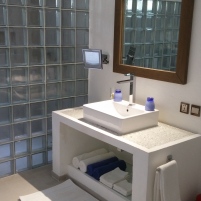 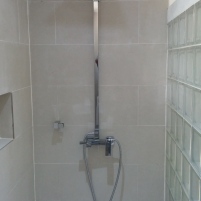 The highlight for me though was the huge terrace – 49sqm allegedly. 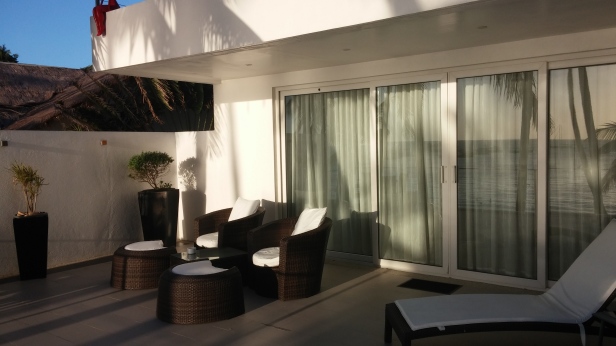 It was the perfect spot for enjoying sunset.

Boracay is a very popular tourist destination.  Dozens of hotels and restaurants line the beach.  The Sundown Beach studios was about a seven-minute walk down the beach from the dancing venue.  But it was a nice walk.

The Latin Dance Festival consisted of two and a half days of daytime workshops and nighttime parties and dance exhibitions that lasted until the wee hours.

Above is the gang who rallied for early morning exercise and a swim.  Many of these folks had just never gone to bed.

Boracay was such a relaxing place that I was forced to play hooky from some of the workshops and just chill.  I made a number of them though, and they were great.  The evening exhibitions and parties were fantastic.  I met a lot of great people from many countries, including the US, China, Vietnam, Russia, Hong Kong, Thailand, Australia and of course the Philippines to name a few.  We vowed to come back the following year and even see each other at Latin dance festivals elsewhere in the region.  I hope so.

When it was time to head back to Manila, APEC had ended mercifully and the airport had reopened. That meant I did not have to take the boat.  Hooray for that!  Nevertheless the trip of less than 20 miles was a real intermodal adventure.  First I made a quarter-mile hike with backpack and carryon from the hotel up a hill to the road where I could catch a minibus.  Actually, multiply that distance times three because when I first reached the road, I realized I left my passport in the room safe and had to go back.  The minibus took me to the port on Boracay.  Next, it was an outrigger boat ride across the channel to Caticlan.  Then I hoped a ride in a motorcycle side-car thing-a-ma-jig to get to the  airport.

Interestingly, the airport on Caticlan is named for its more famous neighbor.

Finally, there was the flight to Manila.  It would be my first flight on Philippine Airlines, which from what I had read, was not a highly rated airline.  I had no complaints though about this flight.  The flight was pretty much on time.  The boarding process at the gate was orderly.  The flight attendants were pleasant and efficient.  The airline had an interesting magazine that I perused during the flight.  Plus, unless its a blizzard in Moscow in January, I enjoy walking out to the airplane a lot more than boarding on a jet bridge

It was a full flight, and things were pretty tight on board.  But the flight was only one hour.  I can put up with almost anything on a plane for one hour.

Even on this short flight, the Flight attendants managed to pass out a small snack and soft drinks to all.

Arrival in Manila was a breeze since there was no need to clear customs and immigration on a domestic flight.  Exiting the terminal, of course, tourists are confronted by free lance drivers asking to drive you to your destination.  The price they quote will be two or three times the rate you will pay for an official taxi at the taxi stand on the median across from the terminal.  You can negotiate a lower price, but it will still be high.

The official taxis cost less, but you might have to wait for 10 – 15 minutes for one in the queue.  The taxi stands display the fares from the airport to various parts of the city so you know what the fare will be before you get in.

I was going to be in Manila for only one night before returning to the US.  Since I only paid $40/night for my three nights at the Best Western, I decided to splurge for one night.  I booked the Peninsula Hotel, a five-star hotel in Makati, the major tourist distinct in Manila which is the area where the pre-Boracay parties had been held..

I booked on Agoda using Agoda points to take $100 of the room rate.  Still, the price was much more than I would normally pay for a hotel, but what the heck.

The next post for this trip describes the Peninsula and the final night at Sage Bar.