Go to Nepal.  But don’t go to Nepal without trekking.  Don’t even think about it (trek difficulty and duration of your choice).

I had my introduction to trekking on an eight-day trip to Nepal that I put together thanks to airline award tickets including business class on Qatar’s new A350-900 and first class on an Etihad 777-200.

After arriving in Nepal, I booked a three-day side trip to Pokhara, Nepal that included a round-trip flight from Kathmandu to Pokhara, two nights in a three-star hotel with breakfast in Pokhara, a private city tour, and a two-day trek with a private guide, meals and overnight accommodation.  The total cost was $650, which was more than the total spent on the rest of my trip, but it was worth it.  I suspect that with a little more digging one could find an even lower price.

The adventure began with a flight from Kathmandu to Pokhara.  The Kathmandu domestic terminal is very basic.  There’s no lounge.  For entertainment, the waiting area had a couple of TVs that were showing an Animal Planet episode.  The only food service was a walk up counter that offered a cold sandwiches and some local fast food .

The terminal’s best feature, without question, was the mixture of people.  There were tourists speaking a variety of languages, people with huge backpacks who looked like they were setting out on a fortnight’s trek, and of course Nepalese travelling for various reasons in their home country.

My flight to Pokhara was on a Yeti Airlines Jetstream 41, the same type of aircraft as my Everest flight.  I even had the same seat, 6A, a window seat in the wing exit row.  The flight took only 30 minutes.  The distance by air is about 100 miles.  In comparison, driving from Kathmandu to Pokhara takes about six hours to cover the 1about 130 road miles.

Pokhara is the second largest city in Nepal.  It, has a population of 500,00 or about one fourth the size of Kathmandu.   The Pokhara airport is tiny and quaint.

The tour company arranged an airport pickup.  The driver was waiting with my name on a sign when I exited the terminal.  It was a short drive to the hotel in the modern tourist section of Pokhara.  That afternoon I took a private tour of Pokhara with my driver.  The next morning I began the two-day trek on the Annapurna Trail.

Pokhara is the gateway to the Annapurna Region, which holds three of the 10 highest mountains in the world.  Within 40 kilometers of Pokhara the terrain rises from 800 meters at Phewa Tal (lake) to over 8,000 meters at the highest summits. 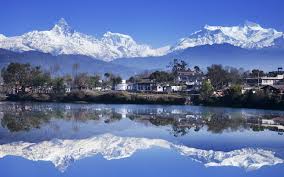 Some peaks of the Annapurna region from Phewa Tal in Pokhara

Trekking to Annapurna base camp requires a minimum of 10 days round trip. My two-day trek was coming nowhere near base camp or the high mountain passes.  The tour brochure described the trek as moderately difficult.  The itinerary was one day up, an overnight stay at the Australian Camp with views of the mountains, and one day back down.  The highest point on the trek was just under 7,000 feet.  No worries.

At the time, what I didn’t know was that the worst trekking disaster in the history of Nepal happened on the trail I was setting out on.

In October 2014 (October and May being the two months with the best weather for summiting Himalayan peaks), near 15,000 feet on the Trail several groups of trekkers were caught in an unforecast severe snowstorm.  At least 43 and perhaps as many as 57 trekkers and guides died due to deep snow and avalanches.  Because there is no requirement for trekkers or guides to register names and numbers of people taking the trial, it is unclear exactly how many perished.  The authorities believe an unknown number remain buried under avalanches..

Snow was the last thing on my mind as we began the trek since the temperature in Pokhara was over 90 degrees.  My guide, Om Prakash Lamichhane, and driver met me at the hotel in the morning.  We drove for 40 minutes to the village of Phedi where the trek began.

Prakash is a member of the Gurung ethnic group.  The Gurung are renowned warriors.  They are the Gurkha soldiers who since 1815 have fought with exceptional valor and distinction in the British army.  They served in Iraq and Afghanistan.

Being from the flatlands of Indiana, my idea of a moderate trek or hike is a brisk walk over rolling terrain.  Not so in Nepal.  At Phedi, the Annapurna trail begins with a climb.  A steep climb!

The grade at the beginning of the trek was steep enough that well built stone steps had been constructed to assist in getting up the hillsides through a series of switchbacks.

To compound matters, I made the typical rookie mistakes of over packing and underestimating the effort the trek required.  Even though our resting place for the evening had wifi, I should have never brought my laptop and paraphernalia.  Prakash’s pack weighed half as much as mine.  The huge packs of the hard-core trekkers we occasionally encountered easily weighed several times what my pack did.  Being 20 or 30 years old and in fantastic shape helps.

The only relief from the neverending steps was a few relatively flat spots every once in awhile.

Locals use the trail as well as trekkers. There were settlements of two or three houses every so often along the trail.  The locals had goats, cattle, and chickens and raised crops on terraced farms.  The residents had no trouble with the trail or the altitude.  They  zipped by – easily navigating the uneven steps in flip flops.

We kept a steady pace.  I forget the Nepalese word that Prakash kept telling me.  The translation though was “slowly, slowly.”  Very good advice.

We would climb for an hour or so and then rest for a few minutes at one of the small  restaurants some of the locals ran from their homes.  After three hours we reached the village of Dhampus which is several groupings of houses and buildings terraced up the hillside.

A settlement in Dhampus

I thought Dhampus was where I would stay in a guest house for the evening.  It turned out it was only where we stopped for lunch.

We ate on a terrace overlooking the surrounding hills and valley.

We both ordered dal bhat with chicken, a traditional Nepalese curry-like dish.

The dal bhat was somewhat spicy.  Cucumbers, carrots and flat bread helped to moderate the spiciness.  After the three-hour climb, I greatly enjoyed the food and rest.

After lunch it was back on the trail to reach our actual goal for the evening, the Australian Camp.  The trail here was not as steep but it seemed more exhausting.   Soon we reached a fork in the trail with a map and other information on trail safety and etiquette.  These were the only trail signs since Phedi.  The hiking figure indicates our position on the map

After this sign the stone steps started again and the trail got somewhat steeper.  The trail sign claimed that the Australian camp was only 20 minutes ahead.  However my legs were aching, and I was running out of steam.  I started counting 200 steps and then resting briefly.  In about 40 minutes, we made it to the Australian Camp.

The Australian Camp had accommodations, a restaurant, and a small store.

I had dal bhat with chicken again for dinner, used the wifi with my laptop for a bit , and turned in.  I wanted to get up early.  Prakash told me that sunrise was the best time to see the mountains.  Cloud and haze obscured them when we reached camp.

Others had also gotten up to see the first sunbeams hit the upper slopes.

Annapurna South is the highest nearby peak.  It blocks the view of peaks behind it including Annapurna which tops out at 8,091 meters or 26,545 feet.  Annapurna is the 10th highest mountain in the world.  The most recent statistics I found showed that as of 2012, of the 14 peaks that are 8,000 meters or higher, Annapurna had the highest fatality rate for climbers.

Since the first ascent in 1950, Annapurna has had 52 deaths during ascent, 191 successful ascents, and nine deaths during descent.  That is a ratio of 34 deaths for every 100 summits and safe returns.  That seems like horrible odds.

The views from the Australian Camp were well worth the trek.  It would have been nice, though, to have the time to explore deeper into the Annapurna Sanctuary.

After breakfast Prakash and I started down the trail to Kande.

The descent was much faster than the climb.  After awhile though my legs were shaking.  That slowed me down a little as I wanted to be sure of my footing.  It took a little less than two hours to get to the road at Kande.

A pleasant walk for an hour along the road brought us to the pick up point.

Soon we were at the pick up point.  The driver arrived after about 30 minutes for the short drive back to Pokhara.

The trek was tiring and inspiring.  Taking the time for a multi-day trek would be nice because it would also provide more time for rest.  But my next foray into the Himalayas will probably involve a trip to Lhasa, Tibet.  From there it is possible to drive to Everest Base Camp on the north side of the mountain.  That would be a spectacular sight and also much easier than hiking in and out for 10 days.

Other posts about this trip to Nepal: