This is the second in a series of posts covering my recent trip to Nepal.  The other posts are:

After the early morning arrival in Doha on the Qatar A350 flight from Philadelphia I proceeded to the Qatar Airways business class lounge for the two-hour layover before the flight to Kathmandu.

My ticket for the upcoming flight was issued in economy class (there was no space in business class when I booked this award ticket).  Nevertheless as an American Airlines Executive Platinum (OneWorld Emerald) I was still able to access the Qatar business class lounge.

I presented my boarding pass to the agent at the lounge for check in.  She tore it up and presented me with a new one with a business class seat assignment. Excellent!  Either space had opened up for the mileage award or economy was oversold and Qatar upgraded me as a partner elite to make room in economy.

After entering the lounge I took a quick look around and then put my name on the list for a shower room.  A morning shower and shave was just the thing to recover from the overnight flight from Philadelphia.

The showers in this lounge have a clean, functional design. 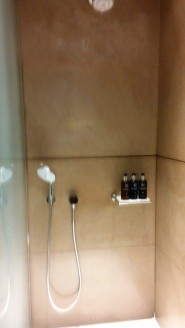 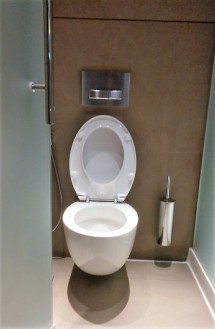 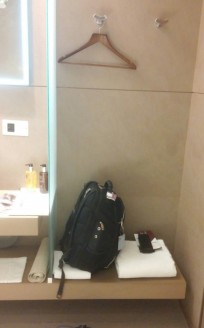 The lounge provides all of the necessities to revive oneself.

After a long flight, showers are one of my favorite attitude-adjusting lounge amenities.

On July 12, 2016, Skytrax announced its 2016 World Airline Awards.  Qatar Airways’ Doha lounge won the award for the best business class lounge.  The spectacular size and architectural features of this lounge at Qatar’s home base surely was a large factor in receiving this award.

Immediately after the shower it was time to go to the boarding gate even though there was still much to explore in this lounge .

Boarding by jet bridge commenced not long after I arrived.  The aircraft was an A330-200.  I had seat 4K , a window seat in the second section of business class just in front of the economy section.

Business class seats on this Qatar A330-200 are in a 2 x 2 x 2 arrangement.  The seat is 20 inches wide and has a 60 inch pitch. There are three rows of seats in the forward business class section and one row in the section I was seated in.  The sections are separated by exit doors, bathrooms and a galley.

The seat controls are located on the arm rest.  The seat can be reclined to an angle-flat position with a maximum of 165 degrees of recline.

My seat was a bulkhead seat so there was no seat in front. The adjoining seat remained vacant. 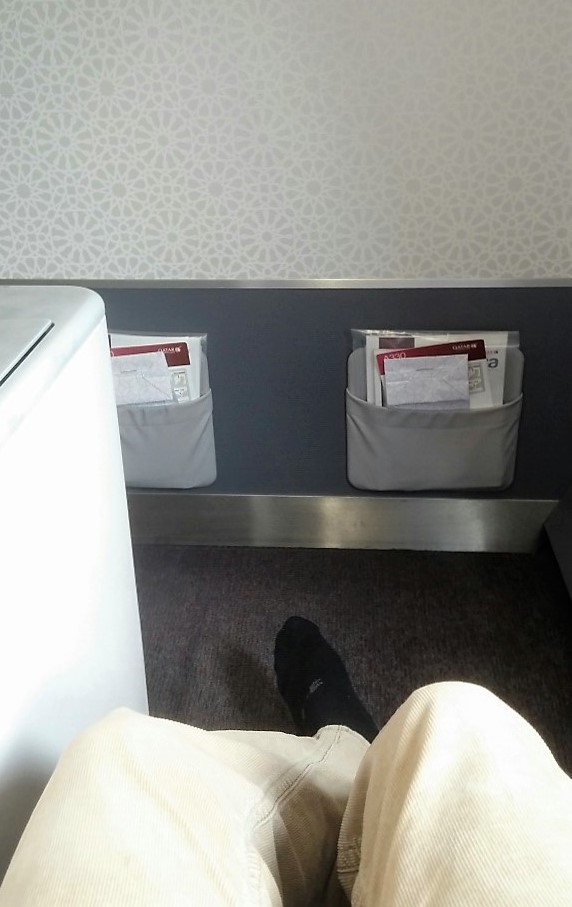 Qatar also won the 2016 Skytrax award for best business class seat.  This award was no doubt based on the wonderful A350 business class seat I flew on the flight to Doha and reviewed in this post. Qatar Airways A350 Businesss Class, Philadelphia to Doha

I partook of a pre-departure beverage.  I forget what it was.  Some champagne perhaps?

At 8:15 a.m. we pushed from the gate and taxied to runway 34R.  After takeoff, the pilot did a 180 degree turn back over the Persian Gulf giving those of us on the right side of the plane a good view of the airport.

Not long after reaching cruise altitude, the flight attendants passed out menus for breakfast.

Breakfast was served on china and white linen.  The flight attendants brought each course individually from the galley and did not use a cart.  Breakfast began with beverages and warm bread, butter, and jam. 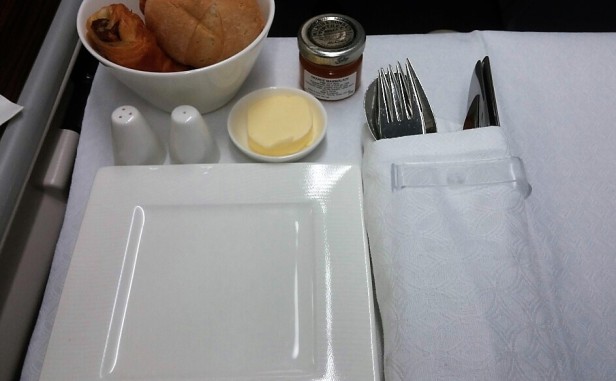 Next I selected the smoked salmon appetizer.

It was the best french toast I’ve had on a plane.

Flight 646 would cover 2,079 miles and take just over four hours to reach Kathmandu, Nepal.  The route of flight was over the Persian Gulf, Iran, Pakistan, India an finally Nepal. 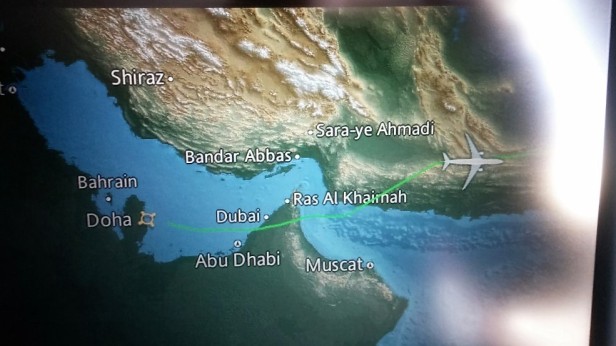 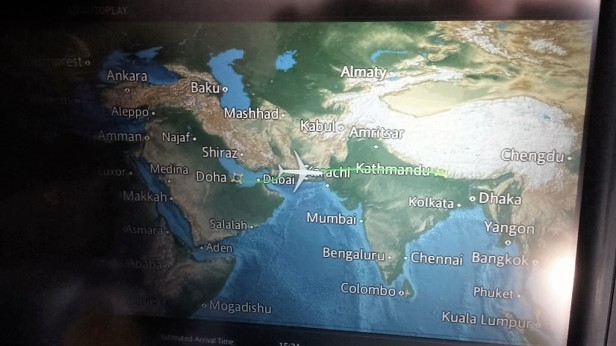 The flight attendants provided efficient and courteous service.  I liked being in the section with only one row of seats.  It was quiet and private.  After four hours of an uneventful flight we landed in Kathmandu at 3:35 p.m. local time.

This flight ended a journey to the other side of the world and launched an excursion into a ancient, complex, and proud civilization.