My flight from Kathmandu arrived at 12:30 a.m.  I had almost eight hours before my flight to Dallas in first class on Ethiad’s 777-200.  That is a lot of time to kill no matter how nice the lounge might be.

The Spa and Salon

The business class lounge has a spa at the back of the lounge.

First, though, I hopped in the shower for a quick refresh.

It was great that the spa was still open in the wee hours of the morning.  I told the receptionist that I wanted the Hedonist and was escorted into a massage room immediately for a 15-minute chair massage.  I expect that the new first class lounge will have table massages and that they will last longer than 15 minutes.

In addition to the Spa the lounge has a salon for hair styling, haircuts or getting a shave.  It did not open until after I needed to leave the lounge in the morning.  I didn’t need a haircut anyway.

The small first class seating area was roped off and had an attendant who checked boarding passes of those entering.

The lounge had one large bar, several areas for buffets, and restaurant seating.

When I arrived in the lounge around 1 a.m., the buffets were set up for breakfast although there were some small sandwiches available, too.

The lounge also had other areas for beverages, deserts and snacks. 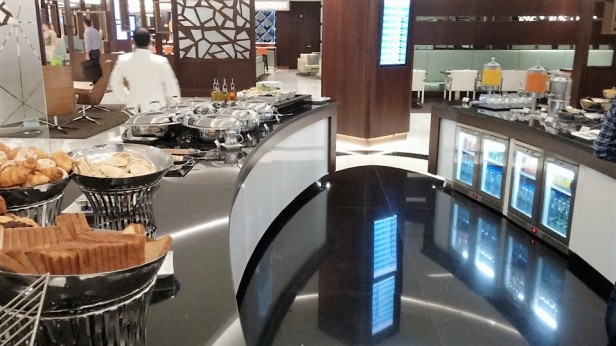 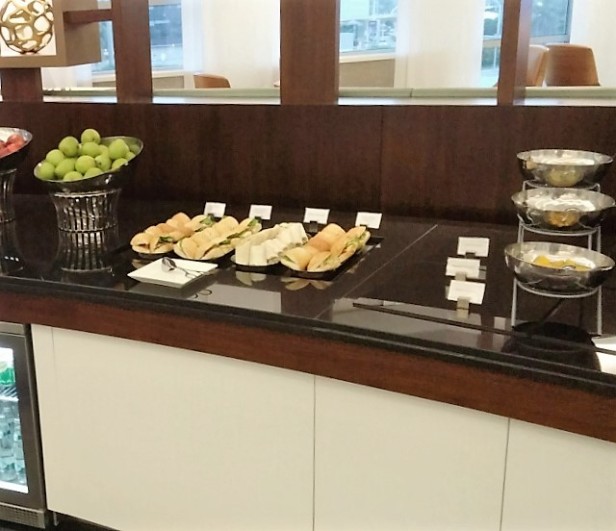 I visited the buffet and returned to my seat in the first class seating area.

There was no place to sleep in this lounge so I remained awake until time for boarding.

Abu Dhabi is the only location outside of North America and Ireland that has a U.S. Customs clearance facility for clearing U.S. customs before arriving in the U.S..  I went there an hour before boarding.   The Global Entry kiosks were not working but I still got through customs quickly.  Clearing customs in Abu Dhabi makes the arrival in Dallas much easier — just like arriving on a domestic flight.

After customs Etihad has another lounge for premium customers to wait in before boarding.  This lounge is small and becomes crowded when several flights are boarding.

The seating has some individual chairs similar to the ones in the first class section and some bench type seating that is uncomfortable.

Even though passengers should not need to spend much time in this lounge between clearing customs and boarding, there is a selection of sandwiches, snacks and beverages.

While I enjoyed the Spa and other features of the Etihad business/first class lounge, I’m looking forward to visiting the new first class lounge when I come back through Abu Dhabi in September 2016 when I will fly Etihad’s fantastic first class apartments on the A380.