I flew Korean Air first class from ATL to Ho Chi Minh City, Vietnam (SGN)!  This was the beginning of what was in fact a round-the-world trip with stops in Vietnam, Thailand and the Maldives.  Other posts about this trip:

The trip began with a flight from my home in Charlotte, NC to ATL to connect to the Korean Air flight to Seoul/Incheon (ICN) on a 777-300ER.  This flight was scheduled to cover 7,152 miles between ATL and ICN in 15 hours.

The flight to ICN was one of the best experiences I’ve had on a plane.

Typically an advance-purchase, first-class fare for this trip costs around $11,000 or more.  Instead of shelling out such an outrageous sum, I acquired my ticket with 90,000 Korean Air frequent-flyer miles.  To get the required miles I transferred to my Korean Air account 60,000 Starwood Starpoints (equaling 75,000 Korean Air miles) and 15,000 Chase Ultimate Rewards points.

For the trip to Atlanta from my home in Charlotte, NC, I used 7,500 Avios from my British Airways account to book a coach seat on American Airlines.

I was a little disappointed by the experience at the Atlanta airport.  First, there is no TSAPre in the F Terminal where you must check in for Korean Air even if your departure is from the E Terminal on an A380.  Second, Korean Air first class passengers must use the Delta Skyclub in Atlanta.

The F Sky Club is one of the nicer Sky Clubs in the Delta system.  It has a Skydeck for outdoor viewing and nice showers.

The Flight to Seoul/Incheon

Boarding for KE 36 had begun when I arrived at Gate F5 after a short walk from the Sky Club.

Being in first class, I bypassed the line using the Sky Priority lane, walked right up to the gate agent handling the boarding and presented my Boarding pass and passport.  After a short wait in the jet bridge with other boarding passengers, the Korean Air flight attendants greeted me at the door and escorted me to my seat in first class.

I put my carry on in the overhead bin along with my backpack.  Once airborne, I stowed the backpack under the ottoman where it was out of the way but easily accessible during the flight.

First class always comes with a bunch of neat stuff to maximize comfort and enjoyment.

The Kosmo Suite is a generous 26.5 inches wide and 79 inches long when reclined into a full-flat bed.  The Kosmo Suites 2.0 on the 747-8 is Korean Air’s newest first-class seat.  That seat offers an enclosed suite, but it is three inches narrower.

The seat controls are straight forward and easily accessible on the right armrest.

The reading light is mounted on a post on the console beside the seat.  It is in a good position for directing variable illumination for reading, working  or eating.

There are three storage compartments within easy reach.  These are ideal for securing things like wallets, glasses, headsets and amenity kits. 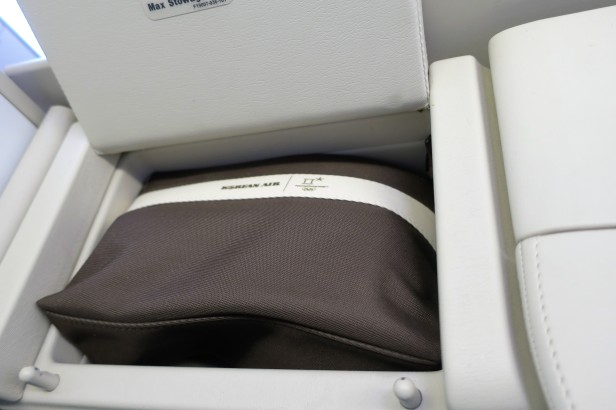 I put my amenity kit in one of the compartments and forgot to take it with me when I deplaned.  Damn.

The video screen is directly in front of the seat.  It is 23 inches wide.  The in-flight entertainment system offers a wide selection of the latest movies, TV shows, and documentaries as well as games, audio selections, landscape cameras and flight following.

The tray table is recessed in the console on the left.  It pulls out easily and slides forward or back for eating or working.  The video remote control is also stored on the console. 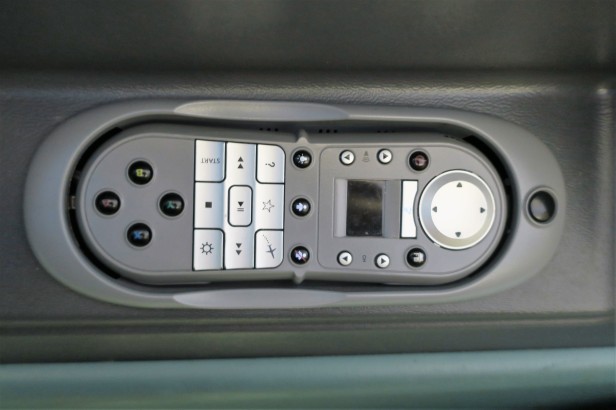 While the seats and amenities on Korean Air aircraft are commendable, the service of the flight attendants is the real highlight.

The service began with a pre-departure beverage.  Only non-alcoholic beverages were offered as the attendant said they could not offer alcohol on departures from the US until after takeoff.  Hmm.  She promised to return with champagne once airborne.

A couple of years ago on a flight from JFK, a Korean Air flight attendant made the mistake of serving a pre-departure beverage in first class with nuts in a package.  The head of in-flight service (who also happened to be the daughter of the Chairman of the airline) was on the flight.  She made the captain taxi back to the gate to have the offending attendant removed.  It made headlines in South Korea.

The menus for the flight had been provided before takeoff. 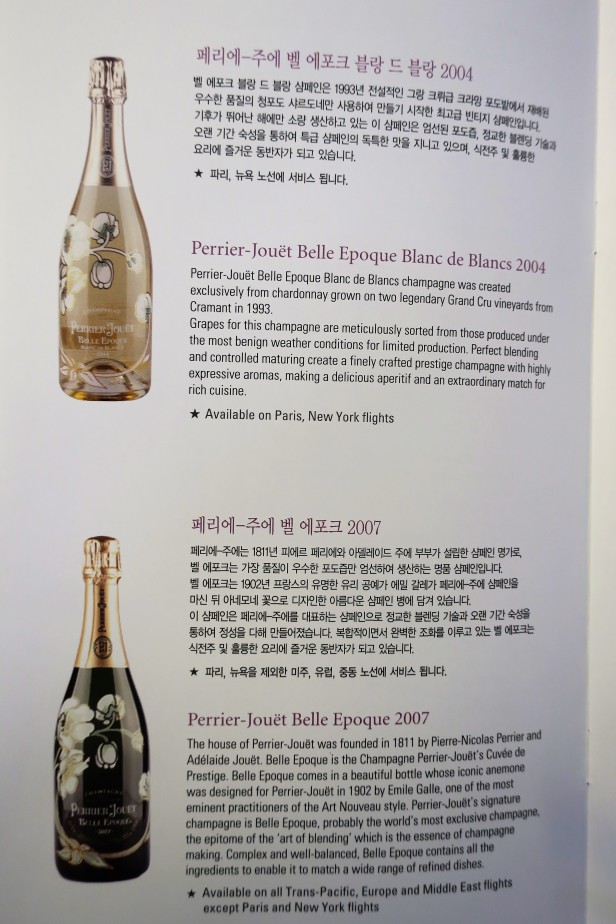 Since our departure was at 12:20, the first and most elaborate meal of the flight was lunch.  The flight attendants began lunch service about one hour after take off.

Of the three options, I chose the beef tenderloin for the main course.  Korean Air has won awards for its Bibimbap, which I’ve had in coach and business class previously.  The business class version was almost identical to coach, so I wasn’t going to “waste” my first class choice on this simple but tasty Korean dish.  I’ve also had the beef and sea bass in business class on Korean Air.  Both had been excellent.

I was in the mood for beef and wanted to see how it was prepared in first class. 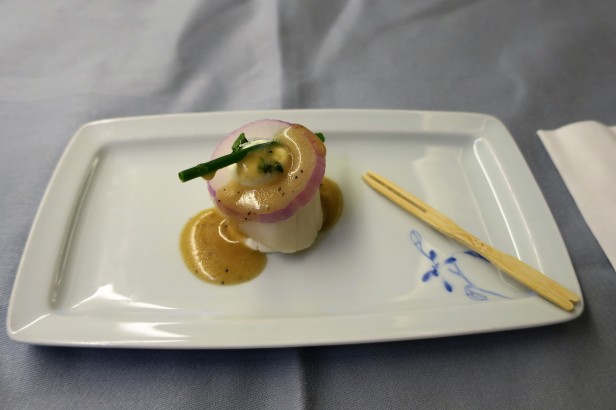 Then a choice of wine. 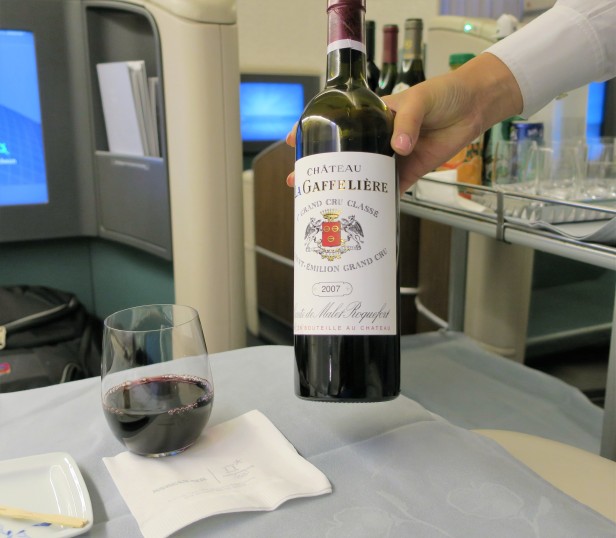 After clearing the appetizer, the flight attendant serves soup.

The flight attendant prepares the salad at your seat to your specifications. 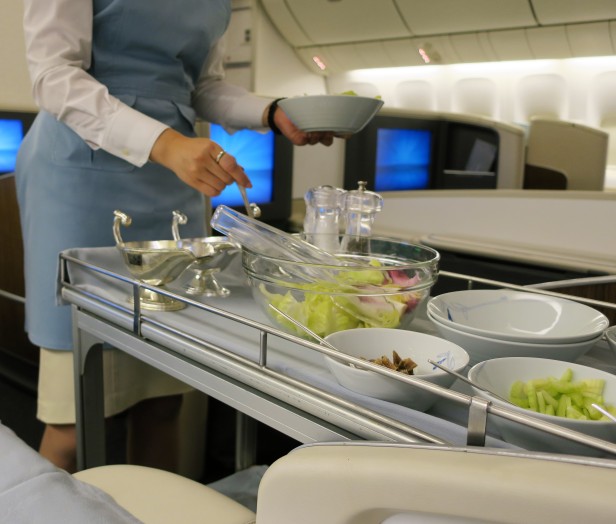 At last the beef tenderloin entree.  It was indeed prepared medium rare as I requested.

Desert is also prepared at the seat to individual specifications.

Even though I was quite full, I could not resist trying a little bit of everything.

I was in such a stupor after this meal that I forgot to get a picture of the pina colada cake and green tea ice cream.

Sleeping in the Kosmo Suite

After dinner I watched a movie and then asked the flight attendant to make the bed.  She reclined the seat to full flat and put down a mattress pad, sheet, pillow and quilt.  After getting into the pajamas, I slept soundly for almost five hours.

I changed into the Korean Air pajamas in the bathroom.  The bathroom is roomy, and the flight attendants keep the bathroom clean. 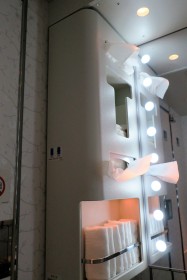 The first class bathroom is stocked with cloth hand towels, razors, and hand lotion in addition to the normal hand soap, paper towels and tissues.

The pajamas are very comfortable.  Pjs make sleeping easy and keep your clothes fresh.  When you change, the flight attendants hang your clothes in a closet at the front of the cabin.

I woke up before the time I’d asked to be roused by the flight attendant.  I started watching another movie.  The sound quality of the Bose headset is excellent b/t/w.  The attendant offered a refreshment.  I asked for cookies (rather than the ramen with side dishes) and I had a glass of wine to go with them. 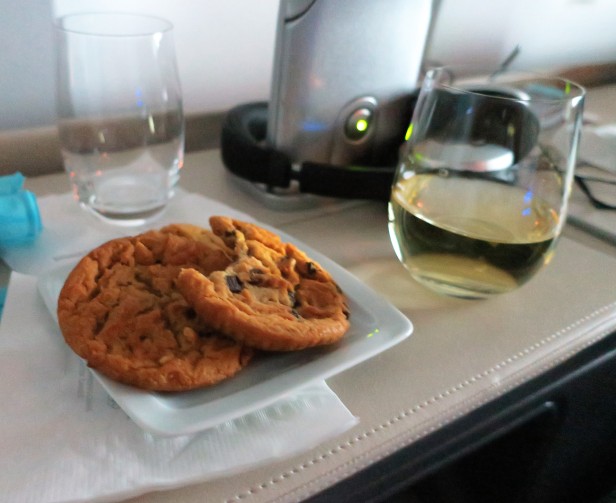 About four hours before landing I ordered the second meal.  The second meal service is never as elaborate as the first even though this meal was called “dinner” in the menu.

I had the roasted chicken thigh, one of my favorite dishes at home.  It was preceded by warm bread and a garden salad prepared in the galley.

The chicken came with a pesto sauce, grilled polenta, and vegetable lasagna. 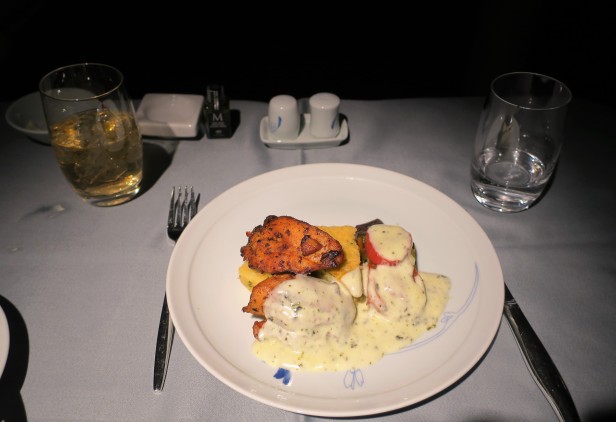 The chicken easily surpassed my homemade version.  A selection of fresh fruit was desert.

My enjoyment of premium cabin travel usually turns on the level of service provided. Korean Air flight attendants always provide service that is second to none.  The service on this flight topped even their normally high standards.  I had even more personal attention since only four of the eight first class seats were occupied on this flight.

The next posts will cover the Korean Air first class lounge at Incheon and the first class flight to Ho Chi Minh City.