During my trip to Vietnam, I took the opportunity to swing by Phuket, Thailand for a brief visit with friends.  In searching for flights I was surprised to find a connection through BKK on Thai that was on an A350-900, an aircraft designed for long-distance international travel.  The distance between Bangkok and Phuket is only about 400 miles.

After a little further research I learned that the A350-900 was a brand new aircraft for Thai.  It was flying a short route like BKK-HKT as a shakedown before being assigned to normal routes from Bangkok to Melbourne, Australia.  I had to try it… especially since the price was inexpensive.

From the gate I could see the plane parked at BKK.  I was anxious to see how Thai would outfit this brand new airplane.

Boarding the flight was delayed for some reason.  When boarding finally started, being in business class I was one of the first to board.

Boarding was through the forward door on the port side.

My seat was 19K, a window seat on the left side in the last row of business class.  Thai configures business class in a 1-2-1 arrangement on this plane.  That means all seats have direct aisle access, which is becoming a minimum requirement for business class on new and remodeled airplanes. There are 32 business-class seats and 289 economy seats in a 3-3-3 configuration.

This report is primarily about the business-class seat (hard product).  The flight was so short there would be no chance to sample the food, beverages, amenities and service (soft product) that would be available on a long-haul international flight.  The business-class seats have 73.5 inches of pitch and are 20 inches wide.

It was immediately apparent that Thai was concentrating on a functional hard product rather than luxury.  For a solo traveler, the window seats are definitely the preferred choice.  The middle seats have enough drawbacks that I would probably avoid them even if I was traveling with a companion.

On the other hand, the window seats on the odd numbered rows are separated from the aisle by a wide console and they are angled reverse herringbone style.  Those are definitely the best seats for privacy and avoiding being disturbed by activity in the aisle or cabin.

The even numbered rows have the console by the window and the seat is on the aisle.

Feet extend into a narrow space under the video screen.

The tray table is stored on the back of the seat in front.  It folds down and out but does not adjust forward or back when deployed.

The seat controls and video remote are located on the console. 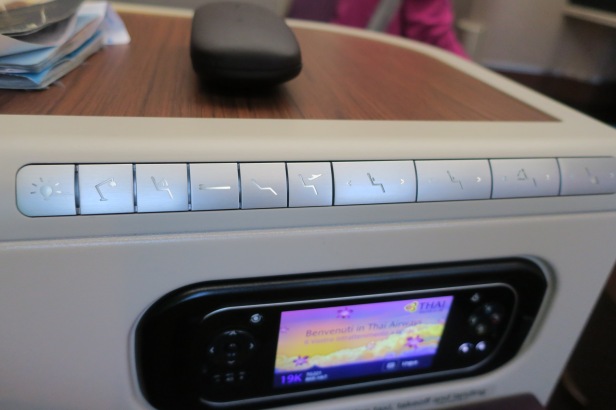 Seat 19K is near the galley which might bother some.  That is not a problem for me with noise-cancelling headsets to tune out any commotion.  And FAs on Thai and most other Asian carriers do a great job of keeping the galley curtains closed.  Being in the last row, this seat has an extra flat area that could be useful on long-haul flights for keeping things like pillows or blankets out of the way but close at hand. 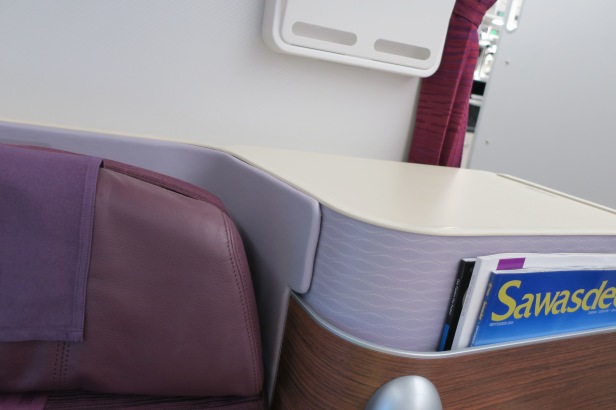 The video screen is fixed so there is no need to stow it for takeoff and landing. 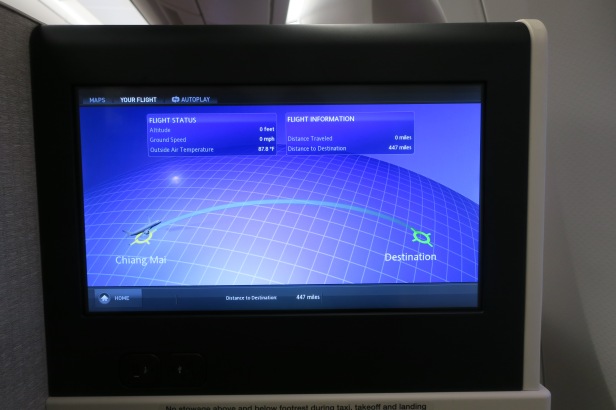 The power outlet is located on the console near the floor.

Before takeoff, the flight attendants distributed wet towels and served a pre-departure beverage.

Handing out wet towels to all passengers before departure is standard on all of the domestic flights I’ve taken in Thailand on Bangkok Airways and Thai.  The flights are not much more than one hour in duration, but these airlines always serve a meal.  Giving out the towels before takeoff saves time with the in-flight meal service.

By the time I had gone through all the gizmos on seat we were ready for departure.

Thai’s A350-900 has external cameras in the nose and tail.  I wish U.S. carriers put these cameras on their planes.

Of course service will be more elegant and elaborate on long-haul international routes that the A350 is designed for.  The amazing thing is that those in coach get essentially the same meal although in plastic containers.  Imagine a U.S. airline that could serve 289 passengers in economy a meal on a flight that lasts about one hour.

The lav in business class was clearly spanking new. 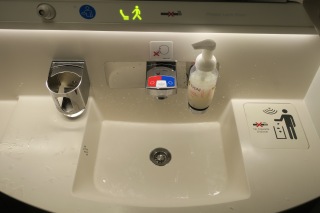 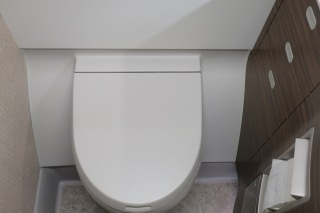 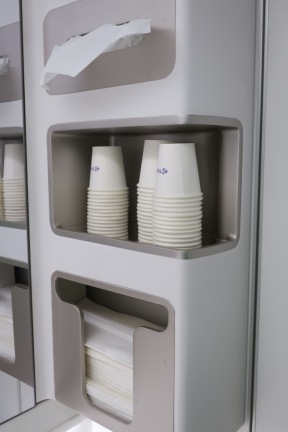 The flight to Phuket took one hour and 14 minutes and covered 447 miles.  It was short but long enough to form an opinion about the hard product on the Thai A350-900.

Business class on the Thai A350-900 was a pleasant experience.  The 1-2-1 all-aisle access seating arrangement is state of the art.  However, the hard product on this Thai aircraft is not as nice as what other airlines are providing in business class on their A350s and 787s.

And even the American Airlines 787-9 that just went into service this week.

Business class always beats coach but I’m not sure the premium cabin is worth the difference in cost (dollars or miles) on a short flight on the Thai A350-900 unless I could be sure of getting one of the window seats in an odd numbered row.  Couples should like the center seats that are next to each other.