Previous posts on this around-the-world journey:

A representative from the Park Hyatt met the speedboat from the Sheraton at the airport dock and escorted me through check in at the domestic terminal for my flight to Kooddoo atoll.

Even though I as flying coach, I was granted access to a lounge in the domestic terminal.  I guess this was the least they could do considering the $500+ price for the flights to and from Kooddoo and the speedboat transfers to and from the Hyatt.

The lounge was quiet and comfortable and had a good selection of amenities for such a small airport.

The lounge also had good wifi, a buffet with decent entrees, a flight monitor, a reasonable number of electrical outlets, and showers. 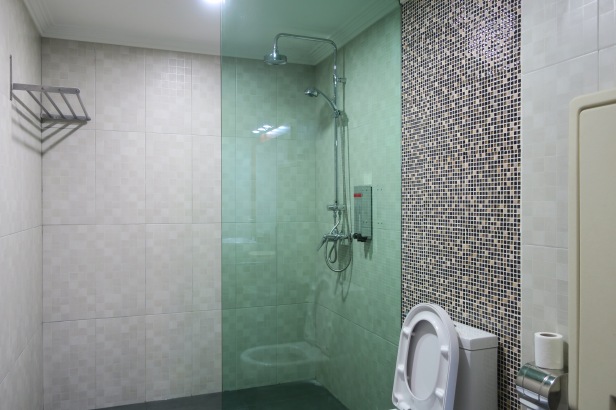 When I decided o go to the Park Hyatt Maldives, I had no idea that this hotel was so distant from MLE that a one-hour flight would be necessary.  And I wasn’t prepared for the price tag (over $500 round trip) for that flight on small prop airplane.

Oh well.  In for a penny… in for a pound.  Actually the fact that another flight of nearly 250 miles would be required only added to the suspense and drama.

Spidey senses tingling, it was off to Kooddoo atoll and finally the Park Hyatt.

There was no first or business class on the Dash 8, but I secured an exit row seat with no one sitting next to me.

Takeoff afforded another good view of Male and the airport.

The Indian Ocean was dotted with small islands along the way.

Upon arriving in Koodoo a Hyatt agent met me in the terminal and drove me in a golf cart a short distance to the dock for the ride to the hotel.

Next is the post on the Park Hyatt Maldives.