On the return trip from the 2017 Singapore Latin Festival I had a chance to try another A350-900.

CX flight 716 was scheduled to depart at 6:10 p.m.  I left the Dnata lounge after a great stay when the first boarding announcement was made at 5:30 p.m.  It was expected to take a little over three hours to travel 1610 miles to HKG.

It was a short walk to the departure gate.

At Terminal 1 there is no security screening before immigration.  It is done at the gate.  While that complicates things at the gate, I like being able to check in and get airside and to a lounge with minimal hassle.  Also, if security causes a delay for any reason, passengers are right at the gate so the plane is not going to leave them there. 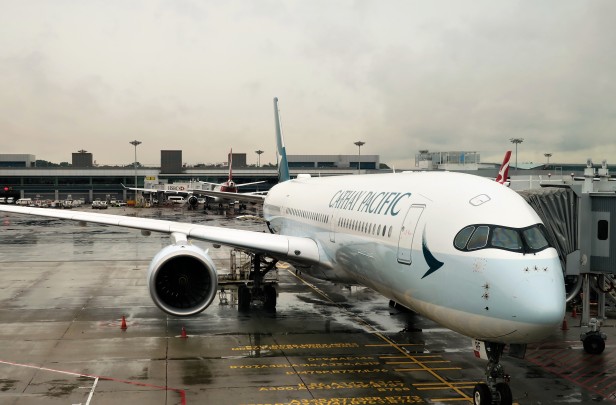 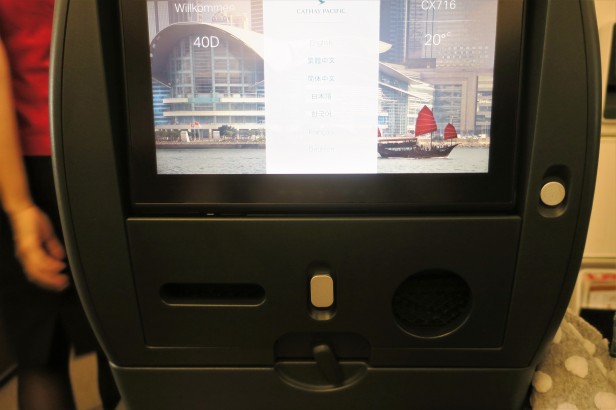 My seat was in the second row of coach in the center section.

Standard economy seats on Cathay’s A350-900 are 18 inches wide and have 32 inches of seat pitch.  That is great width for a economy seat.  The 32 inch seat pitch, however, was tight on this three-hour flight much less a long-haul international flight.  The seat reclines six inches.  That is a lot of recline for n economy seat.

Cathay stagers the rows in economy so that the you are not even with the row across the aisle.  This gives a feeling of more space if you are in an aisle seat.

I would not choose a bulkhead seat on this aircraft as there is no room to extend the legs.

Personal space is always an issue in economy.  The Cathay A350-900 helps out a little with this.

A big factor in seat comfort is the amount of recline.  All economy seats on this aircraft have six inches of recline.  That is more recline than in many economy plus type seats on US carriers.

There is a cupholder on the fold down amenity storage area.  I’d use this to prevent a spill if the seat in front is reclines all the way.

The video screen tilts to ensure that there is good viewing even when the seat in front is reclined fully.

For me the best way to pass the time in economy is by enjoying the in-flight entertainment (IFE) and flight following options.  The Cathay A350-900 has a great IFE system.

Flight following had all of the features I like except for latitude and longitude info. 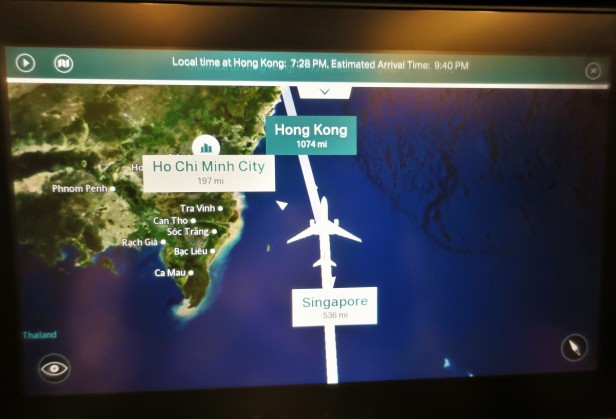 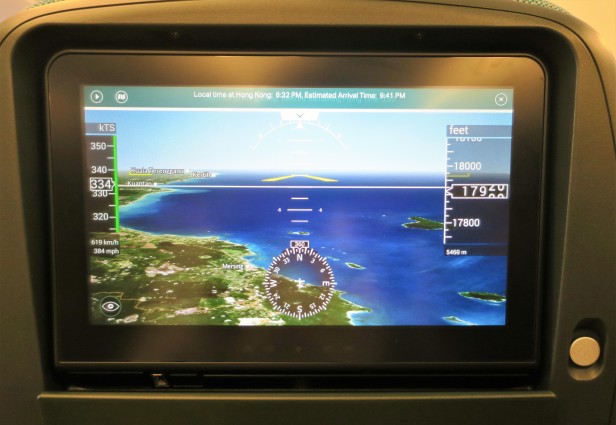 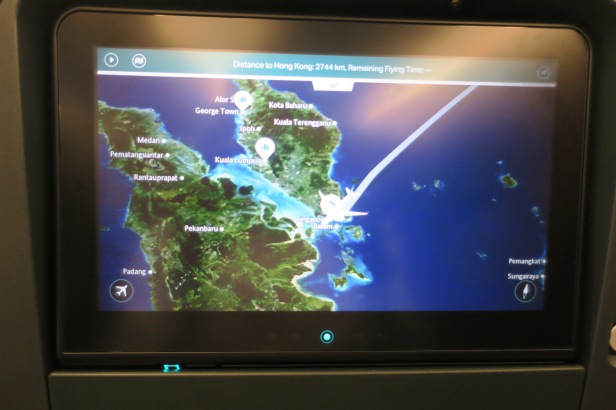 The video screen can be adjusted with the touch of a finger. 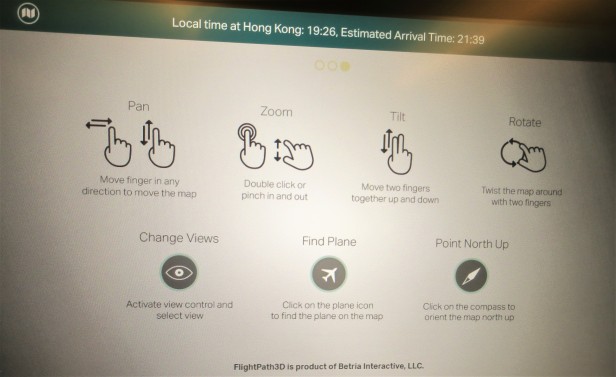 Another nice feature of this aircraft are the external cameras, something US carriers have failed to adopt.

As an American Executive Platinum/Oneworld Emerald I always have great service on Cathay Pacific.  Before takeoff, the head flight attendant always finds me on the aircraft, even in coach, and asks if there is anything I need.  On this flight the head flight attendant for the economy section did this as well.  In flight, they both came back a second time to see if everything was fine.

The meal service began with beverages being offered an hour after takeoff.  Then dinner was served from carts.

I had the chicken with white rice, roll and butter and fresh fruit.  A glass of white wine was the beverage.  After dinner, the flight attendants handed out ice cream for dessert.

The seat width and recline and IFE system make the Cathay Pacific A350-900 an aircraft that delivers a reasonable amount of comfort and enjoyment on longhaul economy routes.  I would be glad to fly it in economy again on a longer flight if I was unable to obtain a business class or premium economy seat.