Several months ago I booked a trip on American Airlines (AA) leaving from Charlotte, NC (CLT) to New York (JFK) connecting in London, England (LHR) on British Airways to Bangalore, India (BLR).  A couple of weeks before this flight, I booked a saver award with Delta miles for a business class trip to Bangkok for the Songkran Festival.  Unfortunately, I later saw that this trip conflicted with the return from BLR.  Oops!

The Benefits of a Schedule Change

When I discovered the blunder, it looked like I was facing a minimum of several hundred dollars in change fees and airfare for booking an earlier return from BLR.  While credit card benefits with American Express would cover part of these charges, substantial out-of-pocket cash was at risk.

The other alternative was changing the award ticket.  As a Delta Diamond I could redeposit the miles without penalty but the cost in miles for travelling on other dates was huge and I was running low on SkyMiles (SkyPesos or StyMiles).

Checking my AA reservation to BLR, I noticed that there had been a schedule change of unknown magnitude.  On AA, schedule changes give the passenger the right to change flights without penalty or difference in airfare as long as the origination and destination cities are the same!  So I changed the outbound to a flight on which I could use an AA Systemwide Upgrade (SWU) to move my seat from economy to business class, and thanks to an accommodating rep on the Executive Platinum line I also changed the date of the return without penalty or airfare charges!  A concession like that engenders loyalty.

Flight From Charlotte to Raleigh Durham

The new routing to LHR was from CLT to Raleigh-Durham, NC (RDU) to LHR.  The 130-mile flight from CLT to RDU was on a 737-800.  I was surprised that the flight attendants offered service in first class during the brief flight.

At RDU, I went to the Admirals Club across from Gate C3 for the two-hour wait before boarding the flight to LHR.

The RDU Admirals Club is small but well appointed.  It overlooks the concourse with limited tarmac views.   It has standard features like wifi, cable TV, newspapers, free snacks, salads, and soup as well as house beer, wine and liquor, as well as food and premium drinks for purchase. This location also has showers, something CLT Admirals clubs lack.

When I checked in at the lounge, the receptionist provided two vouchers for premium drinks since I was flying international business class.  As a Delta Sky Club member, I could have used that facility but chose the Admirals Club because of the premium drink coupons. 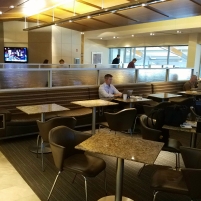 The flight to LHR departed from C23 at the end of the C concourse in Terminal 2.

This AA 777-200 has 45 Zodiac business seats, 21 in the forward section and 24 in the aft section separated by a galley and two lavatories.  The business seats are arranged reverse-herringbone style with some facing aft.

AA canceled plans to install Zodiac seats on more aircraft because of slow deliveries.  American is removing Zodiac seats from all of its 777-200s and converting business class to 37 Super Diamond seats.

My seat was 5L, a forward facing window seat on the starboard side in the forward business section.

I had flown this type of aircraft in business previously on a domestic route.  Now it was time to experience an international flight.

Storage area below the console next to the window

The seat has dual a/c and usb ports which is unusual.

There is plenty of room in the footwell.

The video screen is just over 15 inches and folds out for viewing.  I prefer video screens that are fixed so viewing is available during taxi and the entire flight.

The Zodiac seat is better than the American A330-300 Envoy seat I would fly on the return to CLT but not as nice as the wonderful Super Diamond  seat on another American 777-200 from Miami, FL to Paris, France.

Unlike many other airlines AAmerican does not put dental items, lotion and razors in the lavatories. 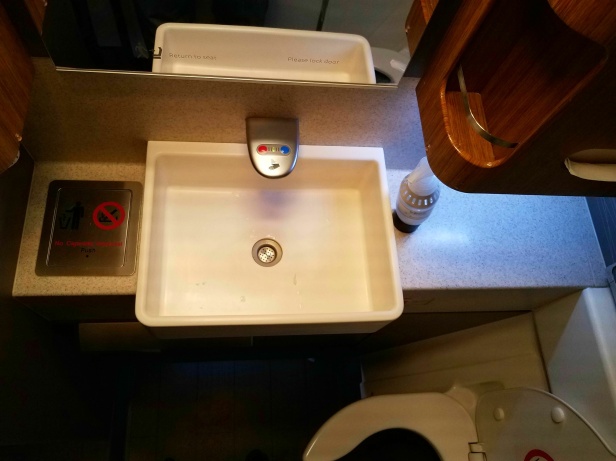 On this flight there was no mattress or pjs.

The aircraft is equipped with wifi.  I was disappointed to learn it was not working.

While I was exploring the seat features and amenities, the FAs brought a tray of beverages.

After takeoff, two right turns brought us downwind of 23R.  In the photo below notice the two small runways of the original airport at this location.

After a smooth climb, the pilots leveled off at 35,000 feet.

For those wanting to maximize sleep or work time, American offers an Express Meal where salad, entree, and dessert are served simultaneously.

As usual on American, service started with a wet towel followed by warm nuts and beverages.

Eight minutes later they offered refills. I had an Australian Chardonnay.

At 18:37 the appetizer and salad was served.

Two minutes after the salad and appetizer, the FAs offered warm bread.  The appetizer and salad were very good, and that’s coming from someone who ordinarily hates brussel sprouts.

At 18:48 we went through some moderate turbulence that spilled some of my wine. Finding smooth air, the entree was served at 18:55pm.

The duck was prepared medium to medium well.  It was delicious along with the greens. My only complaint was that the rice seemed a little dry.  Also a soup course would have been nice.

Five minutes after the entree was served I was offered more warm bread.  Dessert, always one of my favorites, followed at 19:15.

The tasty dessert capped off a lovely meal.  The culinary experience was enhanced by the fact that, on this flight, dinner was served at exactly the right time of day.

After dinner almost everyone except me went to sleep.  The ambient lighting created a sleep-inducing environment.

This 777-200 has a very nice Main Cabin Extra economy section with 3-3-3 seating.  I peeked and saw that the load was light enough that most passengers were able to stretch out and enjoy a “lie flat” economy seat.

There were many movies, games, and tunes in the In-flight Entertainment system. That was not as interesting to me as the Heads Up Display (HUD).

While folks slept, the FAs set up a spread of snacks, sandwiches, fruit, and desserts in the galley between the forward and aft business class sections.  There was an astounding assortment of snacks considering that the flight was less than seven hours and dinner and breakfast were being served too. 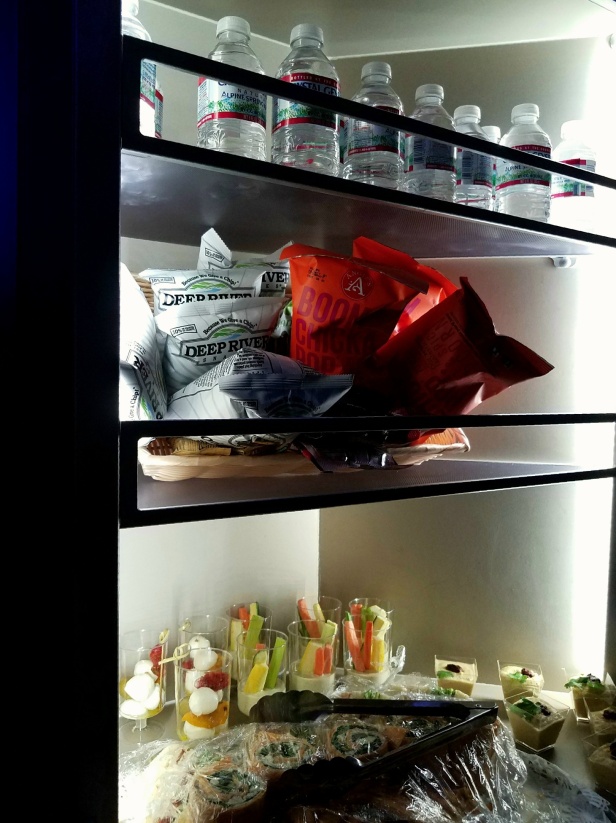 At 00:30 local time, 22:30 EST, when we were mid Atlantic over the Charlie Gibbs Fracture Zone, I helped myself to a midnight snack. 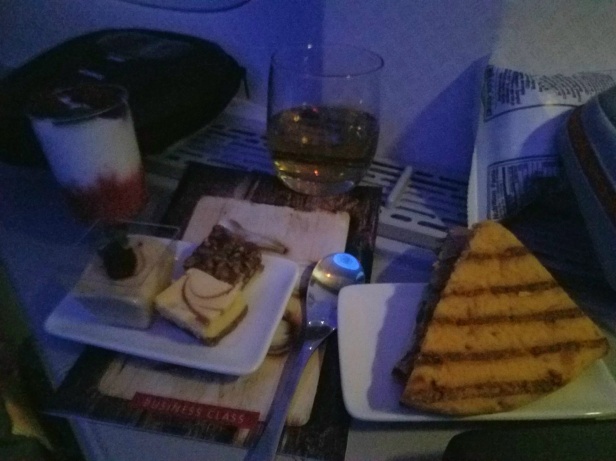 I was wide awake but managed to get about an hour’s rest before the lights came on for breakfast.

To me, breakfast is the least appealing meal on any aircraft or airline.  There is not much variety.  Breakfast was served at 05:16, 48 minutes before landing as we passed over Dublin, Ireland and the Irish Sea at 39,000 feet.

While breakfast was the standard eggs and stuff, I must say that AA consistently has some of the best biscuits in the air or on land.  The texture outside and in is perfect.  I only wish the butter was not served rock hard.  I usually put the butter packet under the egg dish for a minute or two to make it spreadable.

Before breakfast we were given cards for the immigration and customs Fast Track lane. The FAs collected the headsets while were were estimated to be 40 minutes from landing. While earbuds were offered, early collection of headsets and stowing the foldout video screens before landing is annoying especially when no warning is given.

On the descent to LHR those on the right side were treated to a beautiful sunrise.

The approach to LHR was directly over central London. 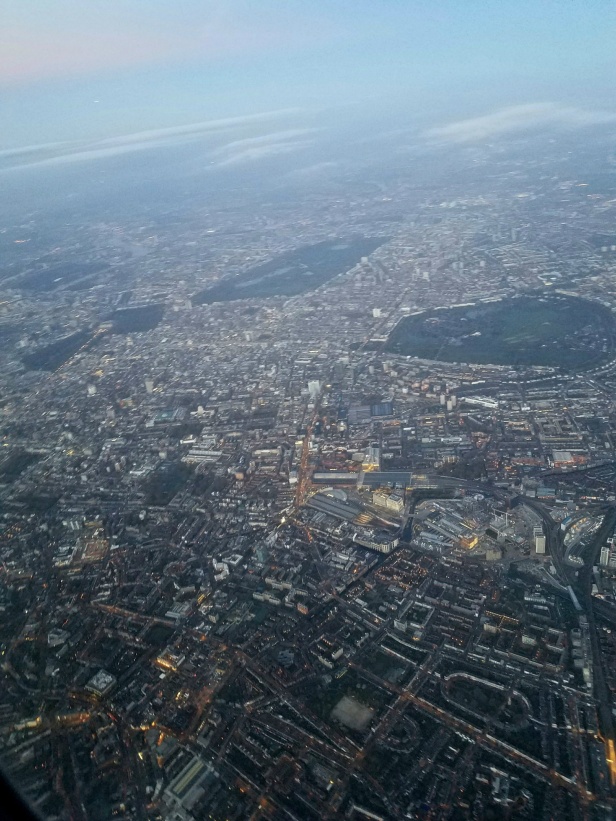 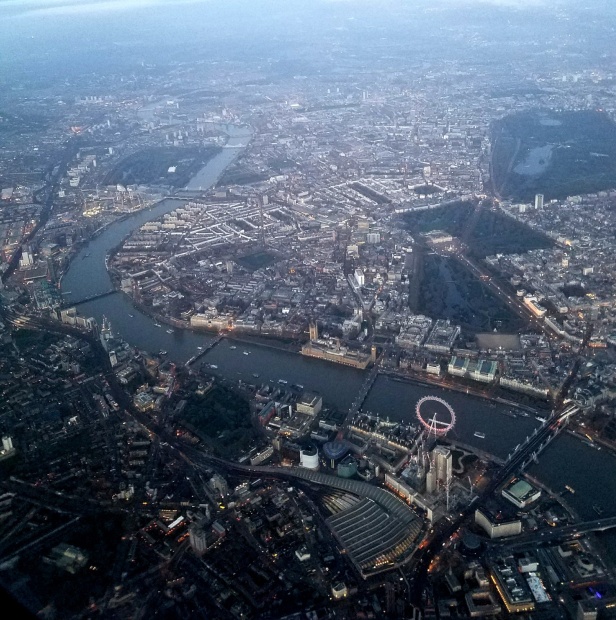 I was pleased to be able to change my flights due to a schedule change.  I had no difficulty on this route using a System Wide Upgrade to enjoy business class.  While the Zodiac seat is not the best business seat American has, I had no complaints about it.  The food was great as was the service.  The assortment of mid-flight snacks was impressive.  On this flight, I give American a Well Done.

One thought on “American Airlines Remodeled 777-200 (Zodiac Seat) Business Class, Raleigh-Durham, NC (RDU) to London, England (LHR) – Or How I learned to Love a Schedule Change”