Previous posts on the business class trip from Charlotte, NC to Bangkok on China Eastern:

The flight from Charlotte arrived at JFK Terminal 4 gate B55.

The Delta app gave no information about the departure gate for the China Eastern flight to Shanghai.  I decided to stop in the Delta Sky Club at T4 to to get that info.   The Sky Club is near gate B32.  Take the escalator to the check in area.

The reception area for the Asanda Spa, a recent addition, is left of the check-in area.

This is the menu for its services.

The services seemed expensive compared to other airport spas.

When I checked in, the agent told me the China Eastern flight would leave from Terminal 1.  To get there she suggested taking the shuttle bus from T4 to T2 and walking to T1.  The other option for getting to T1 is taking a long ride on the airport train outside security.

I decided to stay at the Sky Club for a couple of hours rather than go to the Air France lounge at T1, which is the lounge China Eastern uses.   I’ve been to this lounge a few times and it’s nothing special.

At the Sky Club, there was plenty of comfortable seating with good wifi and access to electrical outlets.

The lounge has a business center in one corner.

This lounge spans the width of the concourse below so the whole length of the lounge are windows overlooking the ramp area on both sides of T4.

For the best views, check out the SkyDeck, the outdoor section of the lounge.

Sky Clubs are a generic brand.  All Sky Club members and those with the American Express Platinum card, international business-class passengers, and SkyTeam Elite Plus passengers flying in economy on international routes have access.  Those flying economy have access to the same lounge benefits as those flying business class or even flying first class on SkyTeam airlines, such as Korean Air and Air France, that have first class flights out of JFK.

Recognizing that international premium cabin passengers are unimpressed with the average Sky Club fare, Delta has improved the food and service in this lounge and a few others at its international gateways.  The for-pay spa is one example.  Another is having a sit-down dining area with separately priced food items.

Those wishing to avoid additional charges for food have a buffet with food options that are better than the the run-of -the-mill SkyClubs.

It is nice that it is possible to scrounge a meal from the buffet that can relieve hunger for a while.

Delta is making a good try, but the broccoli was stone cold.  The soup is usually good.

After the small repast, I took a shower.  Delta has six shower rooms in this lounge.  There is a wait sometimes but usually not long.  The attendant offers amenities like shampoo, body wash, body lotion, dental kit and shaving kit.

The shower rooms are bright and roomy. 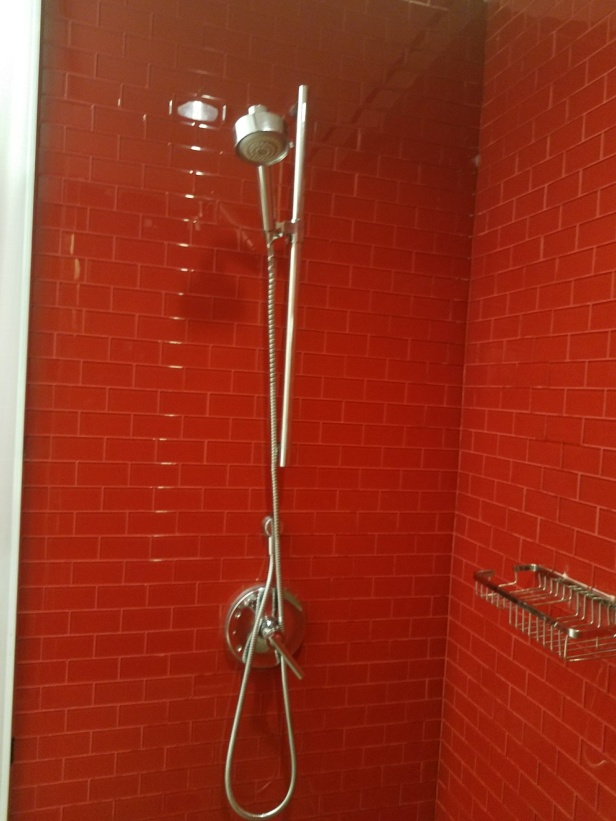 The shower pressure and temperature was fine.  The rooms do not come with a hair dryer, but one can be obtained from the attendant.

A shower before a long flight always makes me relaxed and ready to travel.  After the shower and shave, I headed to the shuttle to T2 and walked to T1.

The Delta T4 SkyClub is great for domestic passengers or those flying economy internationally.  For those in a premium cabin on an international flight, this lounge fails to measure up to most other business-class and especially first-class lounges.  As American Airlines rolls out the new Flagship Lounges and United Airlines expands its Polaris Lounges, Delta will fall farther behind.