Pre-departure beverages are routine in business class, but this was the only flight I’ve been on where the service included a pre-departure meal.

The flight was scheduled to depart PVG at 21:15.  I left the China Eastern VIP lounge in time to arrive at the gate at 20:40, 10 minutes after the scheduled boarding time.  Boarding was from gate 210 on the lower level of Terminal 1.  That meant a bus gate.

Boarding began about 10 minutes after the scheduled departure time.  Business passengers were bused in a large van/small bus with individual seating.

A jet bridge is very convenient for getting on or off a plane.  On the other hand, taking a bus to/from the plane gives passengers a tarmac-level view of airplanes and airport operations that is otherwise unavailable to us.

When I fly as a private pilot, I appreciate always doing a visual and physical pre-flight inspection of the aircraft.  It is kind of lame that astronauts are merely inserted into their spacecraft and have no opportunity for an inspection.

The remote stand for this flight was pretty far from Terminal 1.

The first-class seats looked nice.  Although other than being enclosed, the seats appeared fairly unremarkable.  I think the American Airlines first class seats on the 777-300 are nicer.  An on-board upgrade from business class to first class was available on this flight as on the flight from JFK to PVG.  The price was identical, about $4,300.  That price was too high on the flight from JFK  to PVG much less the much shorter flight from PVG to BKK.

On the flight to BKK, I scored a seat in the small cabin, seat 7L, a window seat on the starboard side in the second row of the cabin.  Seat Guru cautions that the galley and bathrooms between the business class cabins could be bothersome.  I found this seat to be just fine.  In fact, I prefer it greatly over any seat in the larger aft business section especially on a night flight without much service.

All seats in the forward cabin have handy shelves that are great for personal items in flight.

The flight to BKK had no amenity kit.  The only amenities were slippers, which are pretty much mandatory on international flights in Asia in business class, blanket, pillow and headsets.

Instead of a quilt, China Eastern provided a blanket.

Once boarding was complete, we continued to sit at the remote stand.  Then the pilot made an announcement in Chinese.  Contrary to Skyteam policy, there was no English or Thai translation.  I asked a flight attendant what was said.  She told me that air traffic congestion would delay the departure by at least 40 minutes and that dessert would be served before takeoff.

In China, delays and even cancellations due to air traffic congestion are not uncommon.  The military controls the vast majority of the airspace leaving only small portions available to what will soon be the world’s largest civil aviation market.

Before the meal was served, a woman was moved to the first class cabin from some seat behind me.  I do not know if she paid the upgrade fee or was given a seat upfront for another reason.

The meal service began with linen for the tray table, another moist, warm towel, packaged nuts, and beverages.

The linen covered the entire table.  Some airlines use a small bit of cloth that is essentially just a place mat.

And then “dessert,” which was actually a light meal or snack with fruit.

The climb to our initial cruise altitude flight level 340, 34,000 feet, and turn to a southwesterly heading was smooth and uneventful.

Serving the”meal” before departure was a good idea because there would be no need to disturb passengers during the flight.  Many went to sleep immediately or watched movies.  I was able to do some more brushing up on the Berlitz Word Traveler system.

All eight seats in the small business class cabin were occupied but it was very quiet.  There was very little traffic in the aisle compared to the aft business cabin.

Seat 7L is immediately in front of a lavatory and near a galley.  There is a curtain between seat 7L and the bathroom and galley.  The curtain blocks light from the galley, and on this flight, the attendants didn’t use the galley since the only service was provided before takeoff.   Peace and quiet reigned.

Over Hainan Island I felt the aircraft change course.  When the autopilot changes course, the turn is usually imperceptible.  Weather is one reason pilots take control and change course.  Not long after the course change my suspicions were confirmed.  Lightning was illuminating clouds above the Gulf of Tonkin with flashes that were nearly continuous. 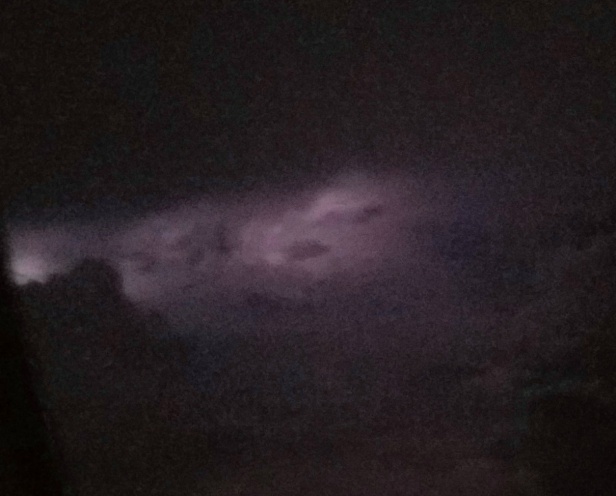 Normally it is difficult to photograph lightning because the flashes are brief and unpredictable.  In this case taking photos was easy.  I merely pointed the cell phone out the window and clicked.  I was guaranteed to get something.

These were very active thunderstorms — nature’s version of shock and awe — with cloud tops approaching our altitude of 36,000 feet.  The pilots gave these cells a wide berth and stayed out of the area of turbulence.  I made sure my seat belt was fastened though.

We began the descent and landing preparations 30 minutes before the expected touchdown.  The flight attendants had handed out Thailand immigration cards shortly after takeoff.  I completed my card and asked if they would hand out cards for the immigration Premium Lane at BKK.  The attendant did not know about these cards and said she would ask the purser.

Premium Lane cards have always been provided on other airlines when flying into BKK in business class.  When Delta flew to BKK, as a Diamond Medallion I would get them even when flying coach.  At times the regular immigration lanes at BKK can be very long.  In the Premium Lane there is never a wait of more than a couple of minutes.

We landed in Bangkok at 01:47 and reached gate G5 at 01:59 about one hour late.  Even though I had no card, I tried the Premium Lane and was able to get through.  The immigration officer told me that airlines must purchase Premium Lane cards.   That explains China Eastern’s failure to provide them.

This flight was more enjoyable than the flight from New York to Shanghai.  Still the failures to translate the pilot’s announcement about the departure delay and to stock any liquor, and the lack of Premium Lane cards reinforced the negative impressions from the first flight.  There are much better uses of the 195,000 Delta Skymiles that it now takes to book this flight.

Other posts about this business class trip from Charlotte to Bangkok: