There are several popular trails to the summit.  They are easily reached by car, bus or simply walking from downtown Cape Town.  A cable car is the quickest and easiest way to get to the top.  I planned to hike up and take the cable car down.

This was my third exploration of the day.  Following the Robben island tour in the morning and then a tour of Cape Town sights, my guide dropped me at the Tafelberg Road trail head a short drive past the lower cable car station.

The Platteklip Gorge trail is the shortest and fastest route to the top.  That also means it is the steepest trail although it is not rated as particularly difficult.  On this trail it takes about 2.5 hours to reach the plateau at the summit and traverse to the cable car station.  Those who are extremely physically fit can do it in less than half that time.  It was a spectacular day, and I was in no hurry stopping several times to rest and enjoy the views.

The trail is made of stones from the surrounding terrain that have been used to create seemingly endless stone steps.  The steps on this trail reminded me (not a fond memory by the way) of the Phedi to Dhampus section of the Annapurna Trail in Nepal.

The lower part of the trail is somewhat easier (or perhaps it was just that my legs were not exhausted yet).  Even in the steep sections, the trail is wide enough for two people to pass side by side. 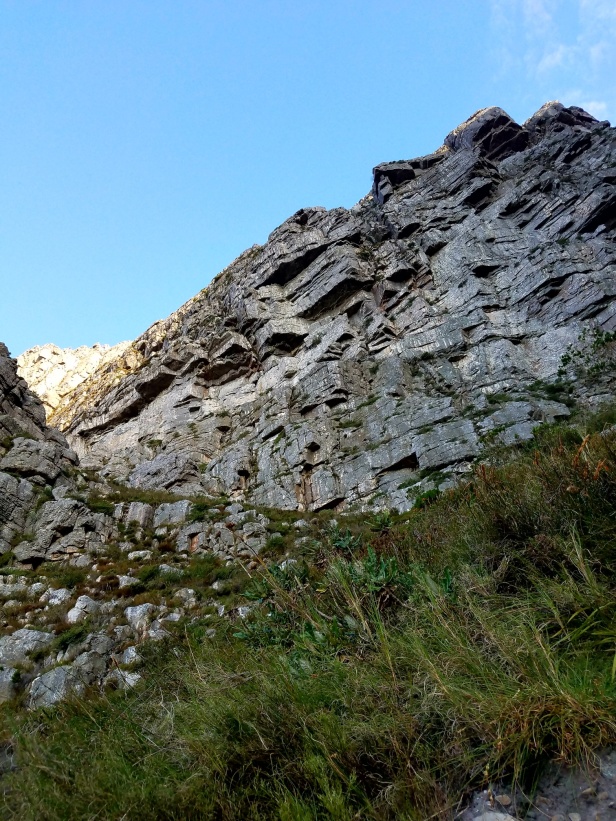 In Platteklip Gorge the trail steepens.

The late start and slow but steady pace resulted in reaching the summit plateau at almost 17:30.

The actual summit, Maclear’s Beacon, which is only a few meters higher, lies to the north of this point.  It is another hour’s hike out and back.  The late hour and the need to reach the cable car station before the last car down at 18:00 meant a trip to the beacon was out of the question.

Instead, I took the trail to the right to the cable car and enjoyed the magnificent sunset.

Here the flatness of the trail allowed appreciating the diversity of the flora.  It is said that there are more species of flora on Table Mountain and in Table Mountain National Park than in all of Great Britain. 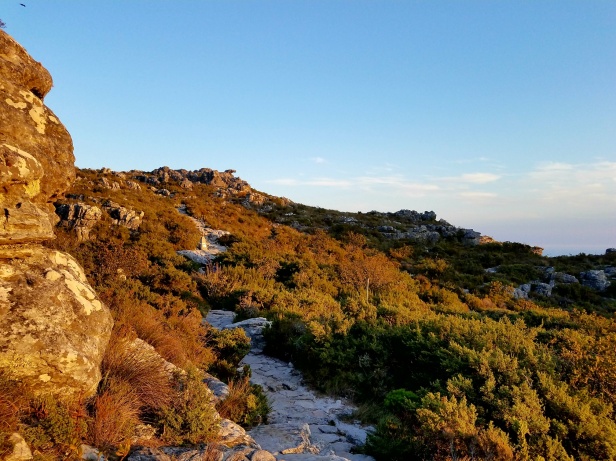 The upper cable car station has a restaurant, snack shop and gift shop.  I bypassed them and straightaway purchased my adult, one-way ticket for 135R (about $10).  I boarded at 5:50pm.

This cable car revolves.  Just stand in one spot and it rotates slowly to give a full 360 degree view.

Hiking Table Mountain is well worth the effort.  For those short on time or wishing to avoid the exertion, the cable car is the best bet.  Either way, taking in the views from the top is a must for anyone visiting Cape Town.