Having completed the goal of visiting all eight Priority Pass lounges at ICN in The Great Seoul/Incheon (ICN) Priority Pass Lounge Crawl, I was looking forward to the trip back to the States in Delta One business class on the 747-400 upper deck.

The flight boarded at Gate 123 on Concourse A.  As usual at ICN, boarding was orderly and efficient.  The flight was scheduled to take just over 12 hours to complete the trip to DTW.  The great-circle distance between ICN and DTW is 6,636 miles.  The onboard IFE system calculated the actual flight path at 6,765 miles. 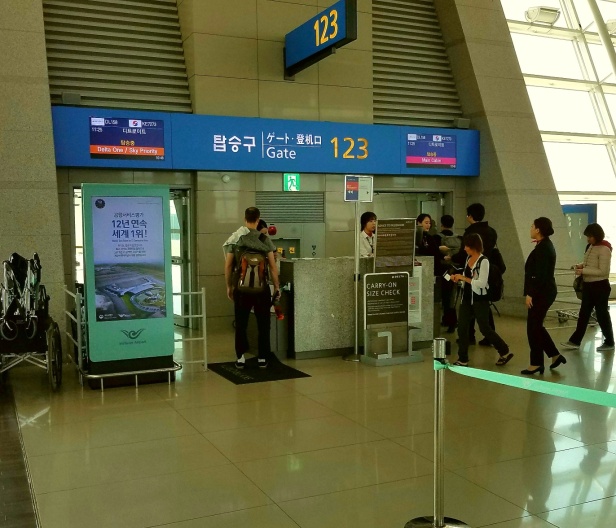 I contend that the upper deck of Delta’s 747-400s is the best business class cabin on any commercial airliner.

I like the upper deck because it is quiet and private.  There are only 14 seats arranged 1-1.  All seats are aisle seats and window seats simultaneously.  It is as close to a private-jet feel as you are going to find on a jumbo jet.

As I have noted previously, the upper deck has one minor downside – the staircase one must use to get up there.

No doubt there are good reasons for the staircase, but it would have been really cool if the designers had equipped the 747 with an elevator :).

After climbing the stairs and stowing my gear at seat 77A, I said hi to the guys on the flight deck and got a chance briefly to sit down and talk.

The pilots were very welcoming and friendly.  Like me, they were also sad that Delta would be dumping its 747s at the end of October.

(Delta is replacing the 376 seat Queen of the Skies with twin-engine A350-900s that seat 306 passengers but have slightly longer range and better fuel efficiency.  The business class seat on the A350-900 is advertised as an enclosed suite which sounds nice.  (I will be flying the A350 in business class and economy right after it comes into service and will report on this new aircraft.)

Updated with reports for Delta A350-900 premium economy and business class.

My seat on this flight was 77A.  My favorite seats on the 747 upper deck are 77K and 77A because of the large flat shelf in front of each seat that is convenient for placing items like newspapers and pillows during cruise.  Being right handed, I prefer seat 77K  over 77A because it has the console on the right.

I appreciate the ability to control ventilation for each seat on 747s.

Controls for the seat and the IFE remote are within easy reach at eye level next to the video screen. 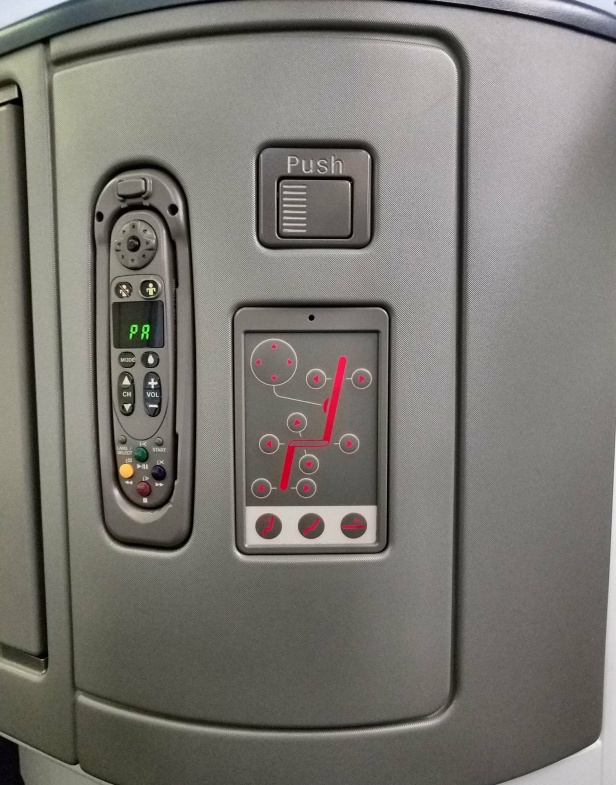 On 747 flights between ICN and DTW, Delta provides standard business-class amenities on long-haul Asian flights (slippers, amenity kit, noise-cancelling headphones, a quilt and pillow) plus a mattress and pajamas.

The mattress and pjs is a nice upgrade that Delta added in the last couple of years.

While not up to the standards of some Asian carriers, Delta flight attendants (FA) always do a good job with their service.   Pre departure, the FAs served a beverage and packaged nuts and distributed menus. 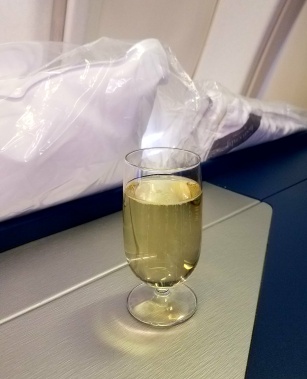 Once airborne, the service began with a beverage service followed by the dinner appetizer.

I selected the Korean dinner, bibimbap.  Bibimbap is a classic Korean dish.   I love Korean food.  Now if  there were only a way to add a table grill on a plane.  Soju, an inexpensive Korean alcoholic beverage, is also required!

Korean Air has won awards for its bibimbap.  It was the first time I had tried this dish on Delta.

Bibimbap is ground or shredded beef, rice, and veggies that are mixed in a bowl with chilli paste. 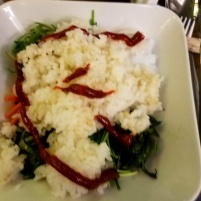 The bibimbap was very good, naturally since the ingredients were catered in Korea.  The only thing missing was a few more ponchon and a raw or sunny-side-up egg to go on top.

After bibimbap the FAs served dessert from a cart. 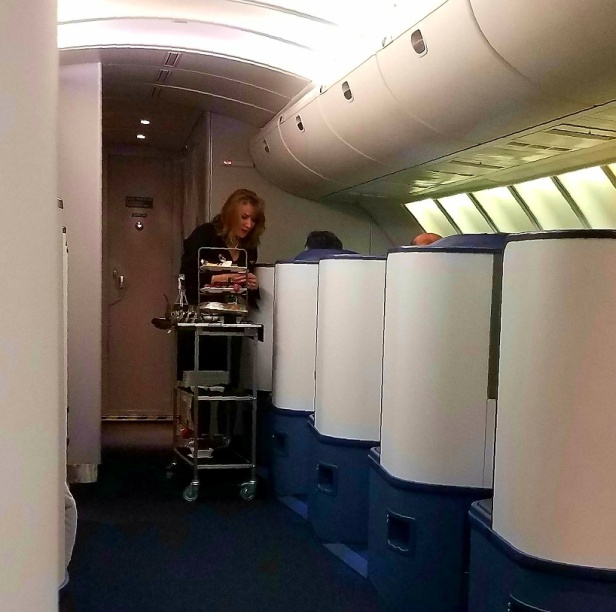 When dessert is served from a cart, I take the opportunity to have some of everything.

The mid-flight snack was a chicken sandwich with gouda cheese, mushrooms and onions.

Finally, about an hour before arrival at DTW, I had another Korean dish, beef bulgogi.

In between meals I reclined the seat to full flat and stretched out on the mattress.  I didn’t change into the pjs, but the mattress makes sleeping on a seat much more comfortable.

As far as movies and TV options, Delta IFE is comparable to the systems on other airlines. Delta IFE deserves kudos for having the Berlitz World Traveller language learning system.  On the other hand , the flight following display technology is somewhat antiquated.   There is no heads-up display, for instance.  This system, however, provides some key information that most others don’t.  It supplies latitude and longitude and the aircraft tail number.

Knowing lat & long info reveals stuff like the precise moment one crosses the equator.  The tail number tells me if I’ve flown that plane before.

Every flight in Delta One on the 747 upper deck is a treat.  On this flight, Delta, or its caterers at ICN, did a very nice job with the bibimbap, too.