The flight departed from DTW Gate 40.

Ironically, right next door at Gate 46 was a 747-400, the plane Delta is ditching in favor of the Airbus.  While the 747 is now permanently retired on Tokyo routes, it still flies DTW to/from Seoul/Incheon (ICN) until sometime in November when Delta puts more A350s in service.

There were more agents at the gate than normal but none of the fanfare of the inaugural flight the day before.

I got to the gate a few minutes before the scheduled boarding time and chatted briefly with a couple of the agents and a redcoat who was the same guy we met the week before during the 747 farewell mileage run to Manila, Philippines.  (Tip:  get to know gate agents a bit, especially at your home airport.  Being pleasant never hurts and might be rewarded with a little above-and-beyond service now and then.)

Although the gate agents seemed busier than usual and somewhat anxious, boarding began precisely at 12:50.  Business class boarded through the forward port door, and economy and premium select (just about every other airline calls it premium economy) used the second door between business and premium economy.

Using two boarding doors is a really good idea.  It cuts boarding time and makes the process easier on all passengers.  Business-class passengers who can stow gear and move about without interference from a line of passengers parading to the back of the plane. as well as the cabin crew performing pre-departure service in business class.

Turning right after proceeding through the galley, I entered the large premium economy (Premium Select Delta calls it) section.

Unless I was very confident there would be an empty seat next to me or was willing and able to accept a seat in an exit row, the prospect of 13 hours or more in a seat with 31-32 inches of pitch is enough to make me reject the A350 and choose a flight with C+ seats that have an extra three or four inches of legroom.  Exit row seats have more legroom but often are located near the lavatories and galleys.  Exit row seats can often be colder because of the door.  Other passengers love to congregate near exit rows as that is usually the only place to stretch cramped bodies.  Bulkhead can offer some extra room but people often use the center bulkhead row as an aisle to get from one side of the plane to the other and personal items cannot be placed on the floor for takeoff and landing in any bulkhead seat.

My Premium Select seat for this flight was 24G, an aisle seat on the starboard side in the center section.

Delta Premium Select seats have a footrest with calf support.  Many premium economy seats on other airlines only offer a footrest bar.

The video remote, storage pocket, and controls for the seat and footrest are located under the armrest opposite the tray table.

This armrest has two small spaces for drinks or snacks.  It looks like it would be easy for accidents to happen if beverages are placed here. 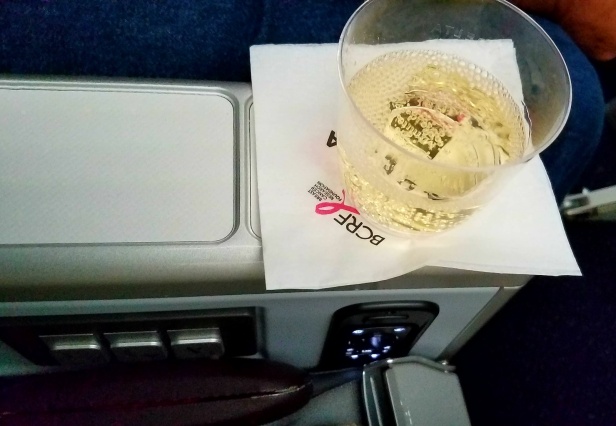 The tray table for 24G is located on the right.  It self deploys after lifting a latch.

A/C power is available at every seat.  Outlets are placed on seatbacks near the floor.  They are easy to reach although unplugging is advisable to allow aisle access for middle passengers.

All seats on the A350-900 have the same IFE system and content.  Premium Select seats have a huge video screen with excellent picture quality.  The system has no live TV and no Berlitz World Traveler.

Amenities are on the seat when passengers board.

The blanket seemed to be slightly heavier than the blankets Delta normally provides in coach.  The overhead bins were stocked with additional blankets.  Slippers are the same as those in business class.

This is the Tumi amenity kit.  It is well stocked for premium economy.

While those are all great amenities, the piece de resistance is the LSTN noise-cancelling headsets.  These aren’t the best quality headsets out there but are again better than  premium economy headsets on many other airlines.

Flight attendants (FAs) never collected the headsets before everyone deplaned.  That makes me think the headsets are not very expensive.

This is what IFE said about our aircraft: 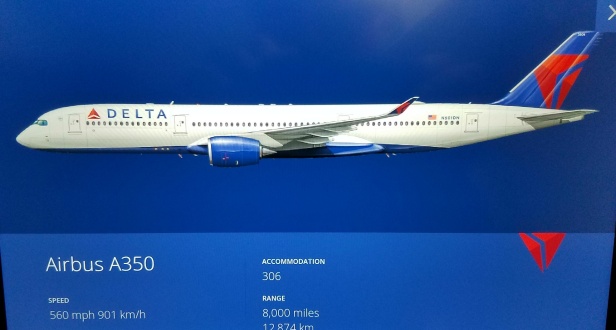 Service began at 14:16 when the FAs handed out Japan immigration forms.  Six minutes later they presented the service plan and menus. 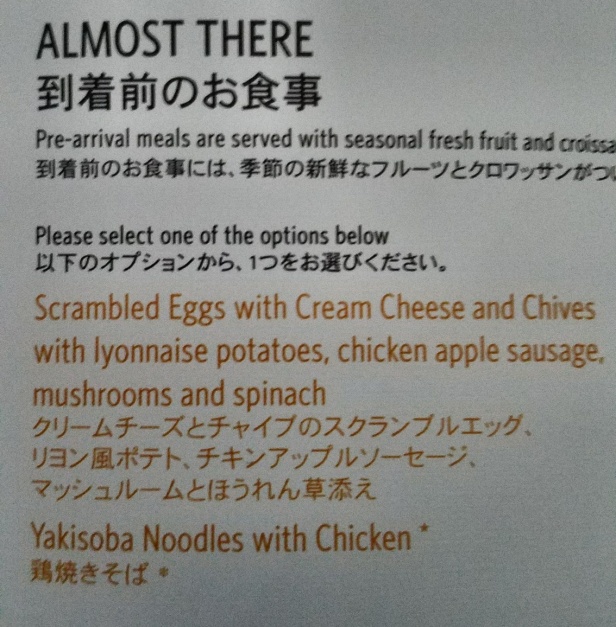 I selected the Japanese meal.  When the FAs got to me in the second to last row of Premium Select, they were out of the chicken entree and sake.

The Japanese meal was terrific.  I especially enjoyed the salmon.

About one hour after lunch there was a call for medical assistance for the passenger in seat 24A.  Not long after, they announced a similar call for a passenger in row 40.  Those calls were resolved quickly.  I hoped they were unrelated to the food.

The FAs served the mid-flight snack as we flew over the Bering Sea.  It was preceded by beverages. 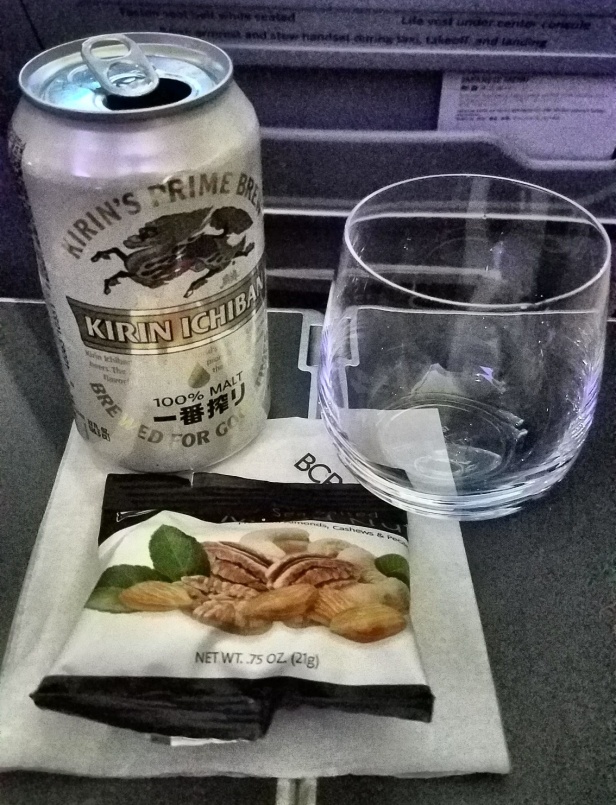 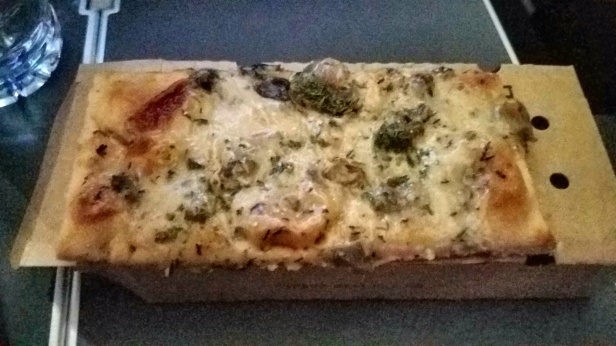 I think the food, especially the first meal, was a cut above what is served in standard economy.  The service certainly was.  Except for the mid-flight snack, meals were served on linen with clear plastic trays, cloth napkins and silverware.

In between meals, I watched some movies and tried to stay warm.  This was the coldest flight I can remember.  I used two blankets and even pulled my hoodie up to retain some body heat.

Two lavatories between the business class and Premium Select cabins were available to the Premium Select passengers.   The lavatories were good sized and they were clean throughout the flight.  Hand lotion would have been a welcomed addition.

With the arrival meal being served so late, the descent from 41,000 feet had begun before the FAs cleared the trays.  There wasn’t much time for everyone to stow gear and make bathroom runs.

To help with connections at the NRT hub, the IFE had a basic, although slightly outdated, diagram of the Delta area at NRT Terminal 1.  Passengers who are connecting to onward flights should explore the area around gates 28 -53.  Those gates are used by ANA and other Star Alliance carriers.  The restaurants and shops are much nicer than in the Delta/ SkyTeam area.

Delta’s A350 is a beautiful aircraft.  The seat, food, service, video screen, and amenities clearly elevate Delta’s Premium Select over the experience in coach.  Given that the A350 has no extra legroom seating in coach, it will be very tempting to pay a steep price to get a Premium Select seat or choose a different aircraft or airline and fly more cheaply in an extra legroom economy seat.  In comparison to the flight in premium economy on an Air France A330, this flight was without question a better experience.

Even in Premium Select, it is nice to sit next to an empty seat.  To increase chances for that, select a seat at the rear of the cabin.  The trade off is that it is possible that menu choices may be limited once the FAs get to the back of the cabin.