As a WWII buff, I had always wanted to visit the Normandy Invasion beaches.  In 2017,after visiting the site of the battle at Pointe du Hoc and before visiting the American Cemetery at Colleville-sur-Mer on my “get out of Paris and see some of the countryside,” “World War II Normandy Invasion” tour, the second stop was Omaha Beach.

In 2018, I completed another WWII buff bucket list item by touring some of the sites of fighting in the Battle of the Bulge.  But first things first.

On D-Day, June 6, 1944, The Allies stormed the German Atlantic Wall with the largest amphibious invasion in history.  Troops were sent ashore between the Cherbourg Peninsula and Le Havre at five beaches code named, from west to east, Utah, Omaha, Gold, Juno, and Sword.  The American Army was assigned to land on Omaha and Utah Beaches and also to secure a German battery of 155mm howitzers at Pointe du Hoc.

Omaha, an eight-mile stretch of beach between Sainte-Honorine des Pertes in the east and Vierville-sur-Mer on the West, was the site of the strongest resistance and highest casualties.

Many battles are shaped by topography.  At Omaha, the dominant topographical feature is the bluff line just beyond the shore that are as high as 30 – 40 meters.    In Normandy, the Germans planned to defeat any invasion by stopping it at the water’s edge.  They established formidable defensive positions on the bluffs and particularly strong positions guarding the draws that served as exits from the beach.

Today, the scene at Omaha is peaceful and serene. 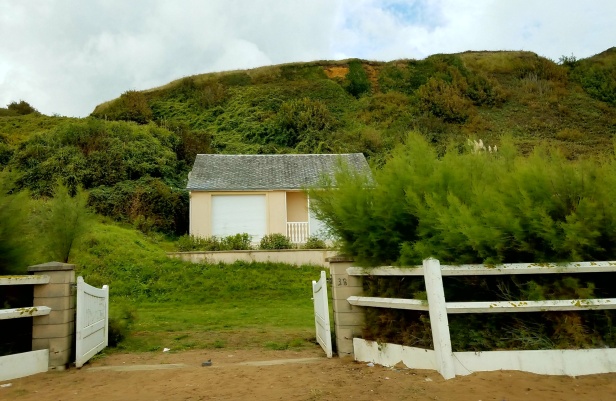 On D-Day, things were quite different.

At low tide when the landings occurred the beach is more than 200 meters wide.

Omaha was the responsibility of V Corps, the 29th and 1st Infantry Divisions, portions of the 2nd and 5th Ranger Battalions, and the 2nd Armored Division.  Units had trained for precise objectives and timetables.  Due to navigational problems, uncleared obstacles, and enemy fire, few units landed in their assigned areas.  Carefully laid plans went out the window fast.

For many, the primary objective became merely staying alive long enough to get to and across the beach to find defilade, if possible. 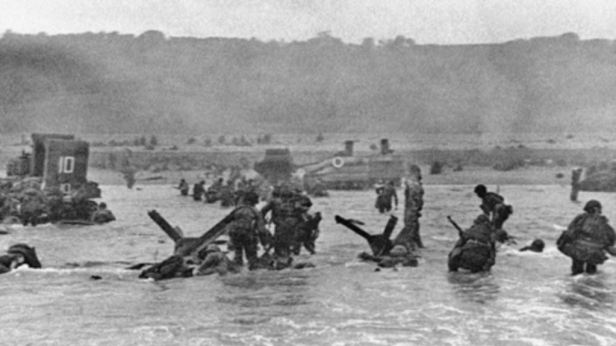 Proposed and actual landings of the first wave at 0630 and German defensive positions are depicted below. 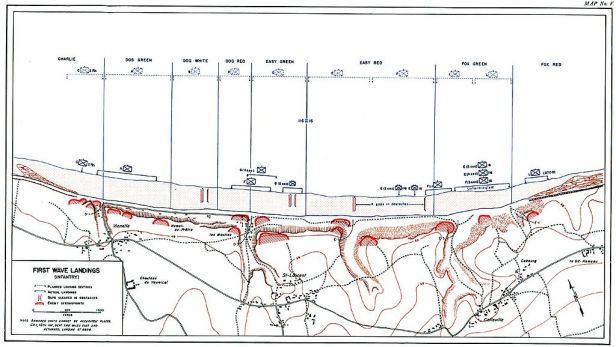 The second wave was to follow at 0700.  These are the proposed and actual follow-up landings. 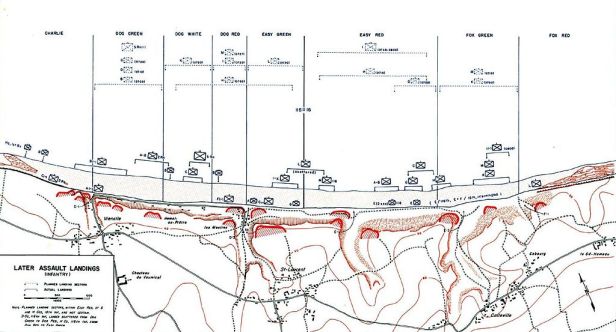 Landings of the 2nd Ranger Battalion in the Dog Green sector near Vierville are depicted reasonably accurately in the dramatic second scene of the movie Saving Private Ryan.

Defenders included elements of the veteran German 352nd Division that had been recently moved from a rear area.  Defenses were concentrated around 15 strong points called Widerstandsnest (resistance nest) identified as WN-60 to WN-74 from east to west.  These points were protected with rifles, machine guns, pillboxes, light artillery and heavy artillery in casemates and open pits, anti-tank guns, and minefields.  Trenches with infantry and machine gun emplacements guarded the areas between strong points.

Many bunkers remain.  Our tour didn’t stop at any, but the public has access.  I wanted to wander around the bluffs and visit a bunker complex or two, but this was a group tour unlike the great private tour I took in 2018 of Battle Of the Bulge sites in Belgium where I had the ability to choose some of the locations we visited.

The photo below from June 7, 1944, shows troops going up the bluff at Draw E-1 and passing the remains of WN 65 that had been knocked out on D Day. 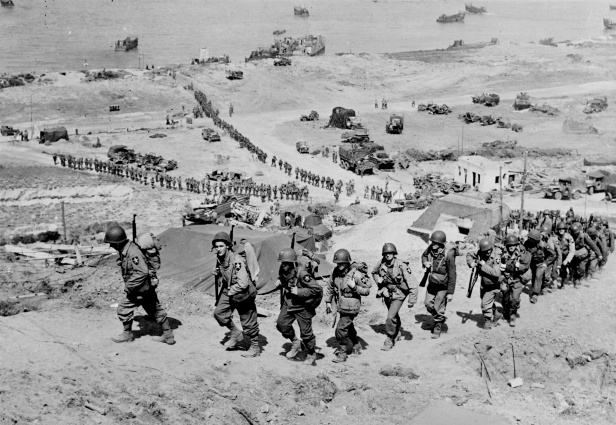 The defenses exacted a heavy toll.  Surprisingly (or maybe not), the exact cost for securing Omaha Beach is unknown.  Estimates of American dead, wounded, missing, and captured at Omaha on D-Day range from 2,000 to 4,700.

The first WWII American cemetery in France was established on D-Day on the western end of Omaha beach at Vierville-sur-Mer.

In 2004, the French erected a sculpture, Les Braves by Anilore Ban, directly on the beach.

A nearby monument commemorates the actions of the 1st Infantry Division and the 116th Regimental Combat Team of the 29th Division. 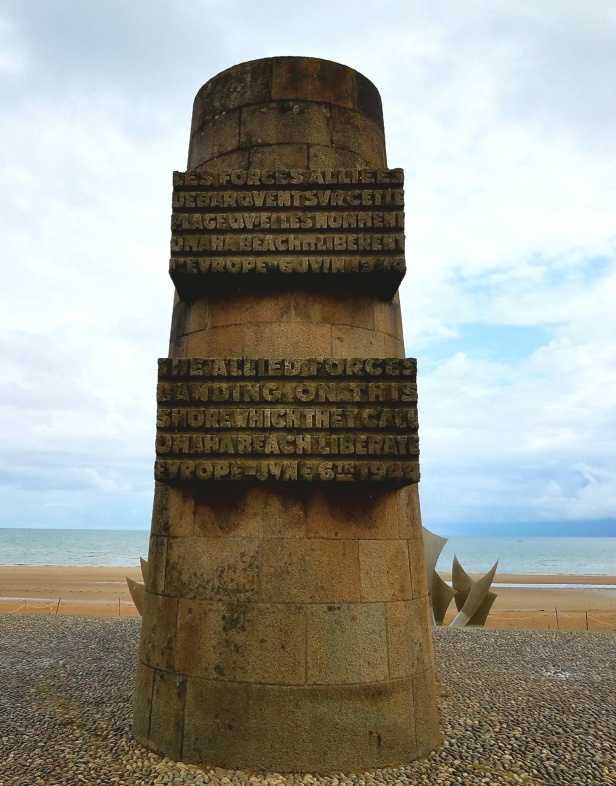 The Omaha Beach Memorial Museum is located in Saint-Laurent-sur-Mer.  The museum depicts the landings and daily life of the troops on both sides as well as life for the locals during the occupation.  It also shows a movie in which participants in the battle relate their experiences.  Admission is about $7.50.  It is worth a visit.

To land the amount of supplies required to provision an advancing army, two artificial harbors (mulberries) were constructed in England, towed to the landing beaches and fixed in place – one at Omaha and one at Gold.  On June 19-20, 1944, a powerful storm severely damaged the harbor at Omaha, and it was abandoned.  The mulberry at Arromanches on Gold remained in operation for 10 months.

There is a lot to explore at Omaha and the other beaches in Normandy.  To ensure you see sights you want, read an article about the invasion and check the internet for a list of things to do in advance.  One could easily spend one or more days roaming the villages and bluffs of Omaha beach.  For those who have less time, it is important to know your top locations to visit before going.  Self-drive or private tours can be the best value.  Group tours see most but not all of the best sites.

As at Pointe du Hoc, the experience of visiting the site of such an important historical event that involved so much sacrifice and valor was moving.  It is helpful to visit places like Omaha Beach so that the price of freedom is remembered and repetition of an event like the Normandy Invasion is never required.