FlightMemory keeps track of my flights.  It is a website I came across a few years ago.  Enter the origin, destination, date, airline, flight number, class, and seat and the website records the data and calculates distance flown and flight time.  Unlike the mileage that airline frequent-flyer programs calculate, FlightMemory mileage is unaffected by the class of service flown.

The site also produces a map of the routes flown.

Most Flown Airlines and Aircraft

I traveled the farthest on American Airlines (137,412 miles) and Delta Airlines (79,202  miles).  The next three were Cathay Pacific, KLM, and Japan Airlines.

The longest flights were on American Airlines, 8,119 miles between Dallas, TX and Hong Kong, SAR China.

The shortest flight was 83 miles on Aegean Airlines from Athens, to Mykonos, Greece.

This seat is roomy and extremely comfortable and has tons of enclosed storage.  It felt like a first-class seat (review upcoming).

I took advantage of an outstanding Hong Kong Airlines’ $311 round-trip, business-class fare from Hong Kong to Bangkok .  They were great flights at a great price.  I’d love to fly them again and also visit the new Club Bauhinia Lounge that opened later in 2017 at HKG.

Aegean/Olympic Air was the shortest flight of the year, 83 miles, but still counts as a new airline flown.

For a change of pace, I returned to Athens by ferry. 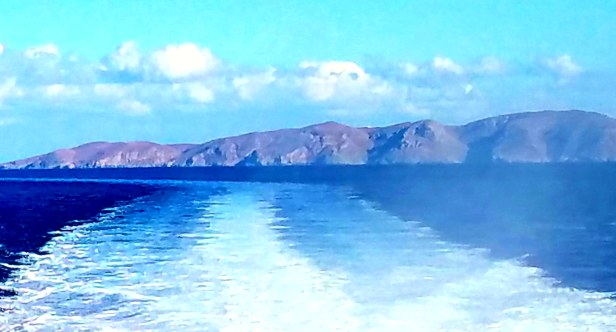 Last year, I flew American Airlines Flagship first class on the 777-300 for the first time.

The service was very good although not as wonderful as service in first class on Cathay Pacific, Japan Airlines, Etihad, and Korean Air.  The seat is extremely comfortable.  It is not enclosed, but because there are only eight passengers in the cabin and very little aisle traffic, privacy was not an issue.

In 2017, Delta Airlines introduced one new aircraft and retired another.

On October 30, 2017, Delta Airlines introduced its new A350-900 with Delta One suites and premium economy (Premium Select Delta calls it).  On October 31, I flew the first commercial flight of Delta A350-900 tail number N501DN.  The flight was from Detroit, MI to Tokyo, Japan.  The seat, service, amenities and even the color scheme in premium economy were impressive.  But I was a little disappointed that there was no discernable new-plane smell.

Delta has led in configuring all of its wide-body aircraft with all-aisle-access, lie-flat seats in business class.  On the other hand, Delta has trailed many of its competitors in terms of installing state-of-the-art, business-class seats.  Seats in business class on Delta 777s and 767s and A330s lack storage, are tight fits, have boring cabin color schemes, and/or lack privacy.

With the A350-900, Delta addressed these issues with varying degrees of success.  Delta is the first U. S. carrier to offer a seat with a door in business class.  Delta calls it Delta One Suites.  I tried it.  Delta One Suites, A350-900 Tokyo, Japan to Detroit, MI.

A product that was new for me was the Japan Airlines Sky Suite. It was outstanding.  I flew it on a 787-9 from Tokyo, Japan to Boston, MA.

Last year was the first time I’d flown premium economy.  In addition to the Delta product, I flew premium economy on Air France from Houston, TX to Paris, France (CDG) and Cathay Pacific from New York, NY (JFK) to Hong Kong (HKG).  (Both to be reviewed.)  The Delta premium economy experience was the best.

As mentioned above, 2017 was the last year for the Delta 747s.  I was able to fly these birds last year from Seoul/Incheon, Republic of Korea (ICN) to Detroit and on a special mileage run with other 747 enthusiasts that Rene’s Points organized to Manila, Philippines (MNL)

Our group got a fantastic welcome and send off in Manila and at the delta Sky Club at NRT.  The only disappointment of the trip was wasting two Global Upgrade Certificates when the 767 flights to/from MNL cleared but the 747 flights to/from DTW did not.

The next morning MNL Delta reps gave us a nice send off with parting gifts.

At Seoul/incheon (ICN), the pilots let me talk with them on the flight deck for a minute.

The upper deck on Delta’s 747-400 only had 14 business-class seats configured 1-1.  It was the best business-class cabin in the sky.  It’s sad to see them go.  Even worse, Delta cancelled its order for 787s.

In 2017, flying earned me top-tier status as an American Airlines Executive Platinum and a Delta Diamond thanks to Delta rollover Medallion Qualification Miles.  I also have Silver status on United Airlines by virtue of being Platinum in the Marriott Rewards frequent guest program.   In 2018, I want to again qualify for the same status spending as little as possible and use miles and points from credit cards and flying to experience premium cabin travel that I would never be able to afford to pay for.

Ain’t no way I’m going to spend $15,000 on Delta or put $250,000 in spend on a Delta credit card and spend $12,000 on American.  So for 2018 to qualify for Delta Diamond and American Executive Platinum I will rely on an opportunity in the fine print of the spend requirements.  When booking flights on partner airlines of American and Delta and crediting those flights to an American or Delta account, the amount of spend credited  is calculated as a percentage of the distance flown.  It is not the price paid for the ticket.

For example, I have booked a couple of long distance flights in business class on China Eastern Airlines, a Delta SkyTeam partner.  Each flight will cost just over $1,100 but will earn about $5,000 in Delta qualifying dollars.

2017 was a great year for flights, nights and sights.  I flew more than I expected to but experienced some new airlines and products and had great flights on familiar airlines, too.  Airlines, though, are making frequent flyer programs so complicated that I wonder if their appeal will diminish as customers are unable to get expected outcomes because of their lack of understanding of the best ways to earn and use miles and achieve elite status.