The great thing about collecting frequent-flyer miles, frequent-guest points, and points from credit-card sing-up bonuses and spend is that it let’s people experience the luxuries of travel that would otherwise be out of practical reach.

That was the case with an around- the-world journey in which I was able to fly first class on Asiana Airlines and Singapore Airlines and business class on Singapore’s new 787-10 and Qatar Airlines’ 777-300 with Q Suites, the most luxurious business-class experience in the sky.

Posts about this around-the-world trip:

The lounge Asiana uses for first class at JFK was the worst part of the trip.  This lounge has lousy food and beverages.  The only electrical outlets are at a work table or in a small quiet room with nice recliners that the sun turned into a hot house.  This lounge is below average for businesses class much less first class.  The side of the lounge Swiss Air uses apparently only for its first-class passengers was closed, but it didn’t look much better.

Boarding was through Gate A6 in Terminal 4.  Boarding and the gate area were better than at most US airports but not up to ICN standards.

Some favor changing the order and have premium passengers board last.  I like it as is.  The extra time in a first- or business-class seat allows time for pre-departure service, getting familiar with all bells and whistles, and settling in.  When flying economy, the less time I spend in a tiny seat the better.

There are 12 first-class seats arranged 1-2-1 in three rows.  Pitch is 84 inches.  Bed length is 81 inches.  Seats are just over 25 inches wide.  Each seat is a suite with doors that close for privacy.

The only disappointing part of the cabin was the tiny A380 windows.

Exploring the features of a new seat is always a pleasure.  This seat had a lot to explore.

I prefer window seats for the view.  Also, they usually have extra room between the seat and the wall that center seats lack.   Although this seat is in the first row, it is not near the lavatories or galley.

In addition to the seat itself, the major features of the suite are a long narrow console opposite the entry door, ottoman, a large video screen and the doors.  A backpack or camera case fit easily under the ottoman.  The ottoman has a seat belt.  A friend or associate in first class can join for a chat or a meal.

The console contains a lighted enclosed storage compartment with, USB port, a covered A/V remote, and connections for headphones as well as the huge tray table.  The A/C outlet is inconveniently located at floor level near the ottoman.

The seat controls are in a removable pad mounted on the wall by the suite entrance.

A wardrobe is built into the wall forward of the suite entrance.

First class comes with many amenities.  A small pillow and light blanket were on the seat at boarding.  A quilt and large pillow for use in bed mode were on the ottoman.

Other amenities included slippers, noise-cancelling headphones and an amenity kit.

The service at the gate included  introductions and welcoming remarks from the cabin manager and first-class flight attendants.  The FAs took orders for non-alcoholic beverages and handed out pajamas.  They delivered beverages with nuts in a bowl.  Just before push back, the cabin crew performed the traditional welcome bow.

Push back was exactly at 13:55 as scheduled.  When sitting in a seat like this one the excitement and anticipation of a great flight make push back, taxi and takeoff one of the best parts of the flight.

The fully fueled A380’s takeoff roll ate up over half of 13R’s length.  We rotated just before reaching Terminal 4.  The A380 external cameras provide great views of takeoff and landing for those not sitting by a window. 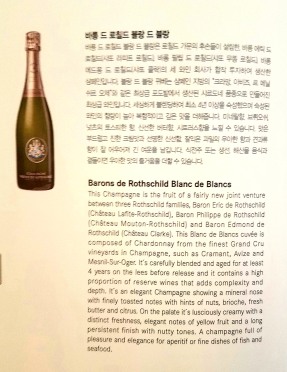 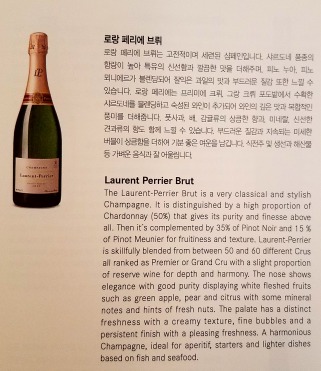 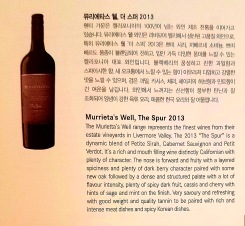 The first meal service is always the most elaborate.  It began 20 minute after takeoff when the attendants took meal orders and passed out hot towels.  I preferred the western starters but, not having Korean food in a long time, the kalbi was very tempting for the entree.  The attendant was very accommodating and said I could have both.  That’s the kind of flexibility that makes first class first class.

The king crab salad and mushroom soup were so good I almost finished them before remembering to get photos. 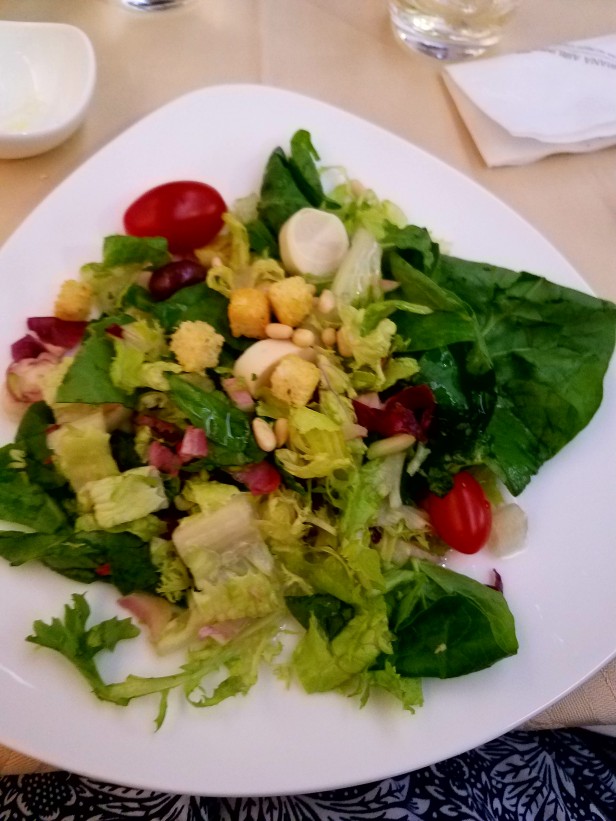 As if those courses weren’t filling enough, the Korean entree was served next at 16:17.

Bibimbap is a simple but delicious dish where the ingredients in the bowl are mixed together with rice and a spicy red paste.  Other than portion size and presentation, this dish is pretty much the same as is served in business or economy class.  Together with the kalbi and ponchon the entree was quite filling and satisfied my need for a Korean food fix.

As if that wasn’t more than enough incredibly delicious food for one meal, the attendant offered coffee and petit fours at 16:55.  I settled for coffee.

While I changed into pajamas, the flight attendant made the bed.   The first-class lav is located on the starboard side.  It is one of the largest I’ve seen on a plane.  It is even bigger than the first class bathroom with a shower on Etihad A380s.

The toilet is under what becomes a small couch when the seat is lowered.

Asiana stocked the lavatory with Verveine amenities for hands, body, and face and dental and shaving supplies.

First-class passengers can also use a smaller bathroom located on the stairway to the flight deck.

The bed is extremely comfortable.

The mattress, quilt and pajamas that are made of thicker material than most airline sleepwear ensure that everyone stays warm.  I took the pjs with me and will use them  for lounge wear at home this winter. 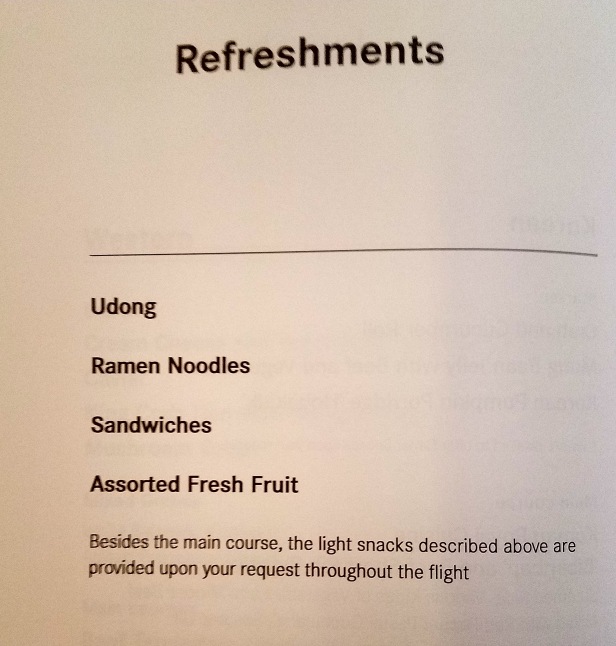 Instead of trying a refreshment, mid flight I accepted the offer of champagne and light snacks to go with a movie.

I ordered the arrival meal about three hours before landing since I skipped the refreshments. This is what was offered.

Having gone with the Korean option for the first meal service, I chose the beef burguignon and was very pleased.

Cheesecake and coffee were the the fitting conclusion to this “snack” as Asiana calls it.

The flight landed at ICN at 16:58 local time.  It had been a spectacular 13 hours and 33 minutes of pure enjoyment.  After flights like this I hate to get off.  But I was also looking forward to spending time in the Asiana First Class Lounge and the up-coming flight to Singapore in first class on Singapore Airlines.

It had been a while since I had flown first class on a premier airline.  Having flown numerous long-haul flights in economy and premium economy over the years, I always feel privileged to fly business class.  The difference between business class and economy  is night and day.

One area where comparisons are more easily made is the seat or hard product, and even that depends not only the airline but the plane and sometimes even the seat.   Of all of the Asian airlines that I’ve flown in first class, being an enclosed suite, the Asiana first-class seat tops the list.  China Southern’s A380 has a similar suite.  I flew it domestically from Guangzhou to Beijing.  It was a great flight but not long enough even with Chinese ATC delays to make a fair comparison.   The Cathay Pacific 777-300, Korean Air 777-300, and Japan Airlines 777-300 first-class flights had large and comfortable seats but no door.

The Etihad A380 First Class Apartment is the largest, most comfortable and most private first-class seat I’ve experienced.  However, if asked what my favorite first-class is to fly, I’d say whichever one I’m flying today.