Visiting base camp at Mt. Everest was a goal I’d had for several years.  In 2016, my  attempt to reach base camp in Nepal failed.  Now I would try reaching base camp in Tibet on the north side of Everest.  It is possible to get there from Lhasa through an  organized tour.  First, one must get to Lhasa.

Flights to and from Lhasa are expensive.  Instead of flying I arranged a train from Beijing to Lhasa through the company running the tour, Tibet Vista.  The train would take just over 40 hours.  That’s a long time to be on a train under any circumstances.  In this case, I couldn’t speak or read the language and was unfamiliar with the customs of Chinese train travel.  What could go wrong?

The journey began with a flight from Dallas, Texas in business class on an American Airlines 787-9.  As an American Executive Platinum frequent flyer, at booking I was able to apply a System Wide Upgrade to transform an economy flight into one in business.  Sweet!  Thanks to a growing number of Chinese airlines flying to the U. S., fares to China have been great.  With the return in premium economy, the round-trip cost was just over $900.

Arriving at PEK on time at about 14:00 left six hours until the train departed.  After quickly clearing immigration and customs, I stopped at the transit hotel one level below the arrivals level to shower and rest briefly before starting the 40-hour train trip.  The transit hotel rents basic rooms on an hourly basis.  The cost is 140 CNY for one hour, which is about $20 or appreciably less than renting a Minute Suites for one hour at an airport in the U.S.  I was in the room for 65 or 70 minutes but was not charged extra.

The train to Lhasa departed from Beijing West Train Station.  I took an airport bus to the station because it was cheaper than a taxi and, with my backpack and carry-on, it seemed easier than taking the Airport Express train to the city and then transferring to the subway.

A booth on the island near Terminal 2 Door 9 sells bus tickets for 30 CNY (about $5).  The bus boards near the same spot.  Beijing West Railway Station is the third or fourth stop on the line served by Bus No. 7.

The bus ride was comfortable but much longer than expected, almost two hours due to holiday traffic I believe.  I met a representative from the tour company outside the train station just after 18:00.  He gave me the train ticket and two colored copies of the travel permit foreigners must have to visit Tibet in addition to a Chinese visa.

I was travelling on a lunar festival weekend.  The station was packed, and there was no place to sit.  I grabbed a bite at a KFC to have a place to rest for a bit.  This was also a chance to take advantage of what seemed like the last opportunity for western comfort food for a while.  I took some of the food on the train for a late night snack.

After the meal I stood in line for boarding.

The tour company had secured a soft sleeper berth.  The ticket cost $310.  More than I expected for a one-way train ride but I was lucky to get any ticket due to the holiday.  Boarding finally began about 19:20

Each soft sleeper compartment has four beds, two bunk beds on each side.  I was in Car 6, Berth 32.  That was an upper berth. 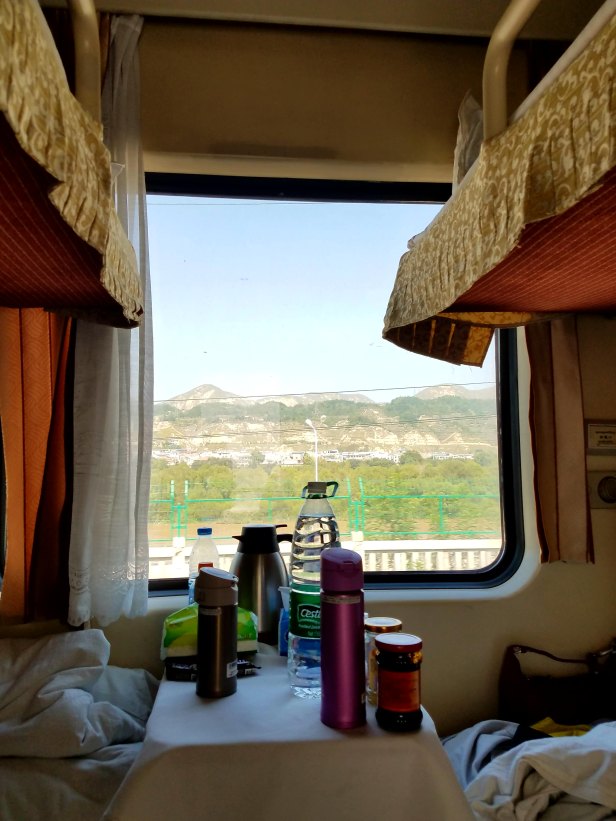 A small table sits under a window that provides good views when sitting on a lower berth.  Getting a good look from an upper berth requires hanging over the edge.  There is room for luggage under the lower berths and in a space next to the upper berths.  A  power outlet compatible with U.S. two-prong plugs is under the table.

Mattresses are soft but thin making for a firm sleep.  Beds also came with a duvet.  The temperature in the compartment was cool making sleep under the duvet comfortable.

Each berth had a reading light with two levels of illumination and an oxygen vent.

The oxygen vents dispensed gas with an unknown percentage of oxygen.  Over 10,000 feet I experienced shortness of breath but no headaches or altitude sickness.  I did not feel any differently when I turned on the vent.

Outside the compartment was a narrow aisle with huge windows.

A couple from Inner Mongolia and a lady from Beijing who was travelling with her father were the others in the compartment.  Before turning in the first night we  introduced ourselves and talked a little about our backgrounds and trips to Lhasa.  Fortunately, Cynthia, the lady from Beijing who worked for a pharmaceutical company, spoke very good English.  Notes from the Berlitz language learning system of the in-flight entertainment system on a previous flight also came in handy.  It was a very pleasant, helpful and friendly group.

Eating On The Train

Most Chinese came aboard with snacks, fruit, and packaged dishes that are prepared  with hot water.

Car 6 was next to the dining car.  It offered hot light meals and beverages including beer and wine.

Since I can’t read or speak Chinese, I just pointed to a picture when I ordered. 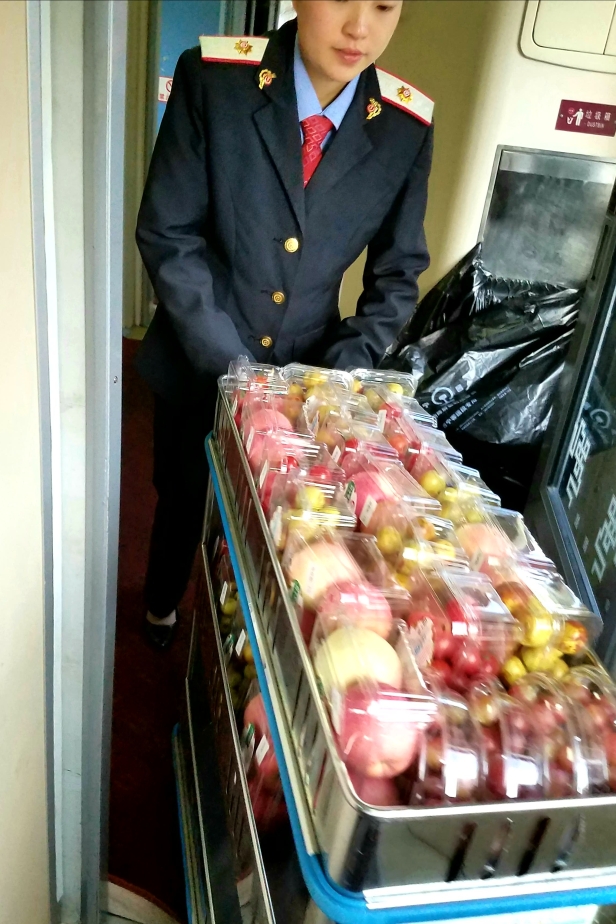 Each car has a bathroom and several washbasins at one end.

The best part of the trip was the scenery.  On the long journey to Lhasa, the train passes every kind of landscape from urban settings to large lakes, open range, and mountain vistas. 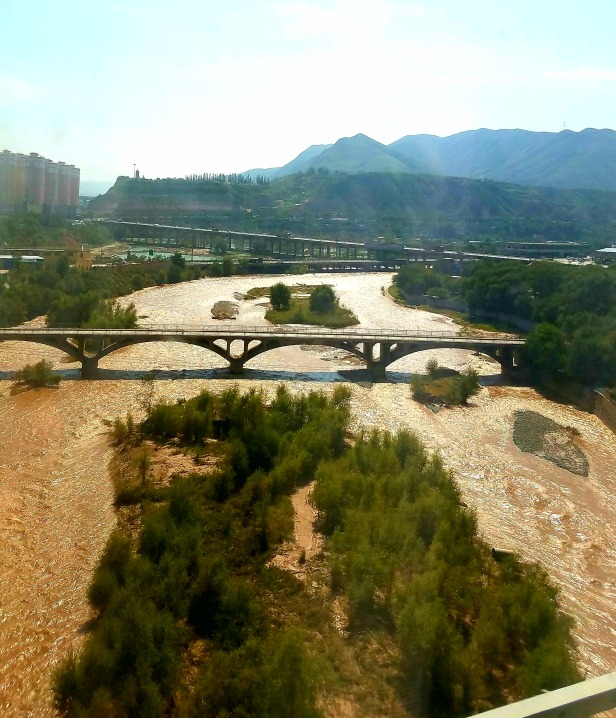 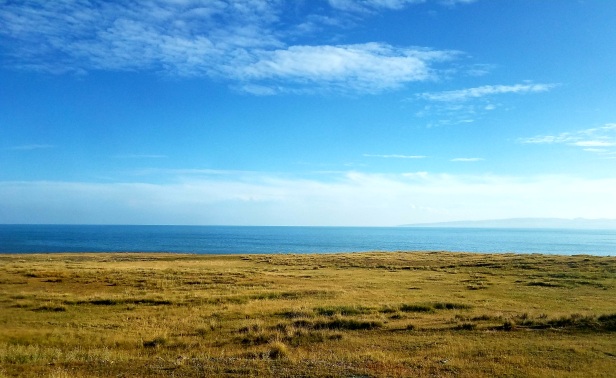 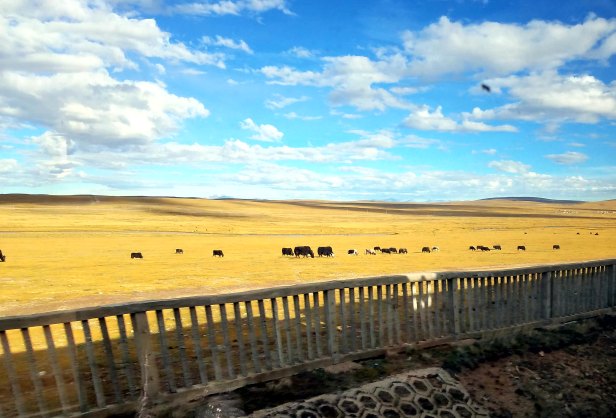 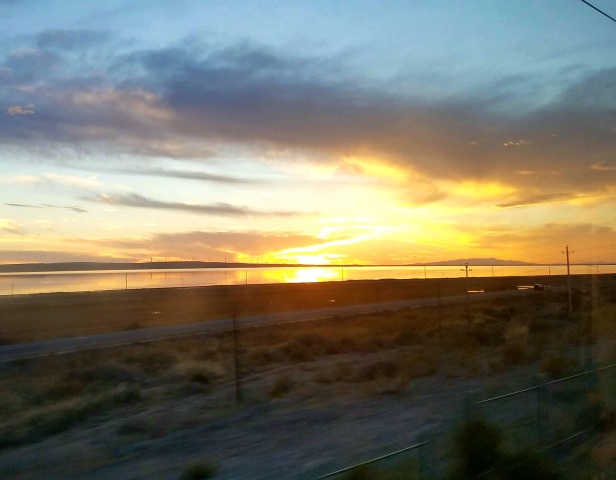 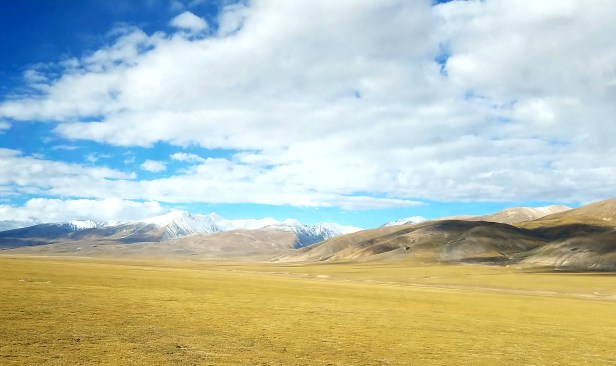 I almost expected a Chinese version of Butch Cassidy and the Sundance Kid to come swooping down out of the hills.

Interestingly, China, like the U.S., seems to be very east-coast centric.  Most consider Chengdu (look it up on a map) to be in western China.  That’s like some of my east coast friends who consider Chicago to be in the western U.S.

The train pulled into the station at Lhasa at 12:20 exactly on schedule 40 hours and 20 minutes after departure.

The train traveled 3,757 kilometers.  It climbed from close to sea level at Beijing to just over 4,500 meters, the highest point, at Nagqu.

At the station exit a guard collected my passport and another one escorted me to a nearby building where my travel permit was reviewed and verified for the second or third time on the trip.  After that brief check, I was free to pick up my passport and meet the agent from Tibet Vista who transported me to my hotel.

I’m very glad I took this trip even though I was also very glad to get off the train.  The soft sleeper compartment provided as much comfort and privacy as is available to four strangers in a small space over an extended period.  Bathrooms were the most objectionable, but tolerable, part of the experience.

I saw no other westerners on the train, and I was a novelty as the only Black person.  The staff and other passengers treated me well even with trade tensions running high.  The language barrier was a challenge at times but one that could be overcome.  Although I was unsure of our location most of the time, it was always a treat to watch the scenery pass and wonder what was coming next.

In sum, the train provided a truly authentic Chinese experience for better or worse.  That is something you won’t get on a plane.