Bangkok Airways is a regional airline based in Bangkok, Thailand.  It calls itself “Asia’s Boutique Airline.”  That’s a fitting moniker because it is small but stylish.   Bangkok Airways provided the transportation for the flight from Bangkok, Thailand to Luang Prabang.  It was my first trip to the Lao People’s Democratic Republic.

Other posts about this around-the-world trip:

Bangkok Airways operates a fleet of 38 aircraft.  The primary hub is Bangkok with secondary hubs at Phuket (HKT) and Chiang Mai (CNX).  Bangkok Airways began scheduled service in 1986.  Bangkok Airways flew its first jet, the 717, in 2000.  I have previously reported on a flight on the “lie-flat economy seat” on a Bangkok Airways A320 from Phuket to Bangkok.

Here is the current Bangkok Airways flight schedule and specifications for the ATR 72-600:

Bangkok Airways has codeshare and other partnerships with airlines in all three airline alliances plus Qatar, Emirates, and Etihad among others.  Members of the FlyerBonus frequent flyer program can earn points and redeem awards on Japan Airlines, Cathay Pacific, Etihad, Qatar and Jet Airways in addition to Bangkok Airways.

This is the current route map:

Bangkok Airways is unique in my experience in that all passengers have access to its Boutique Lounges and Courtesy Corner/Kiosks featuring light snacks and soft drinks.

Snacks and soft drinks. I like the popcorn machine.

The Boutique Lounge is one of the things I like about Bangkok Airways.  On this flight I didn’t use it.  Instead I stopped briefly in the Miracle First Class Lounge near Gate D5.  It and the Miracle Business Class lounge next door are both Priority Pass lounges.  They have alcoholic beverages and better food.  It was a short walk from there to the bus gates for the long ride to the stand where the plane was parked.

This flight was an ATR 72-600, a twin-engine, high-wing aircraft.  The 500 and 600 models are pretty much identical except that the 600 has newer engines that can supply a 5% power boost on takeoff.  The improved performance helps with takeoffs in short-field, high-altitude, and hot-weather conditions.

Here are the fleet specifications from the inflight magazine.

I boarded with my carry on and backpack through the door at the back of the plane.  The exit row is all the way at the front just behind the cockpit and forward cargo hold.  When I reached the seat I found my carry on was a tad too big for the overhead bin.  I brought it all the way to the back again to leave with a baggage handler who stowed it in the aft cargo hold.  No problem

My seat was 1A, an exit-row, bulkhead seat.  This seat has great pitch because no one is sitting in front.

Unless it is a full flight, Bangkok Airways and many other airlines in Asia often leave exit row seats unassigned until check in.  The seats are free, and usually, as in this case, I’m the only one sitting in the row.  That’s another thing I love about this airline.

Bangkok Airways has great flight attendants.  Chalk that up as the third thing I love about Bangkok Airways.  They serve hot meals on full A320 flights that are in the air for less than an hour.  On this flight they began the meal service 14 minutes after takeoff.    This mid-morning flight had sandwiches. 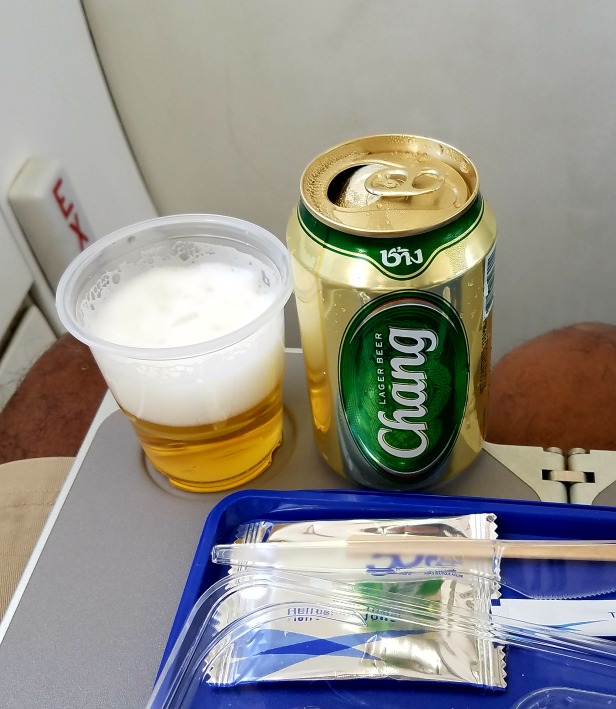 The flight attendants offered beverages with the meal and came around once more after that.

The bulkhead seat offers protection from someone reclining into your space but restricts leg room.  That’s not a problem when you are the only one in the row.  It was cold in the exit row.  I needed a blanket, and Bangkok Airways has them in coach. 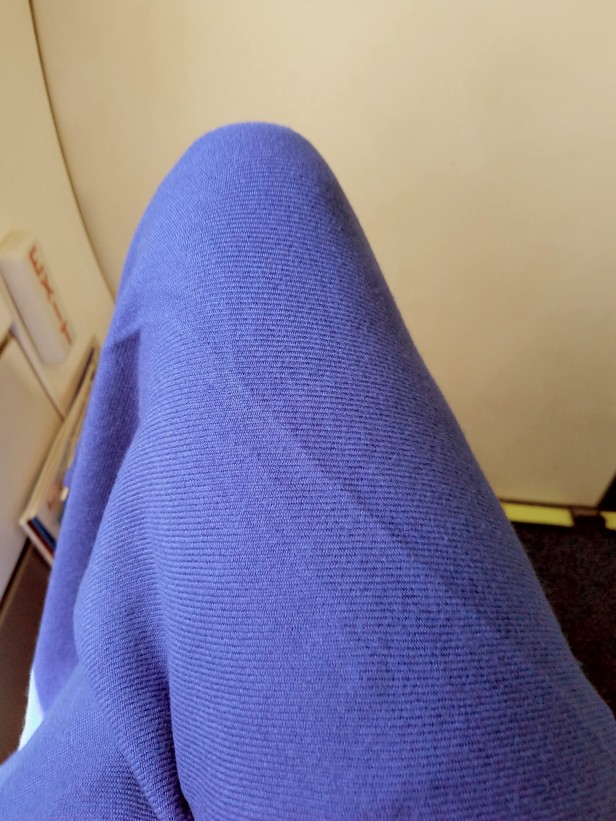 Luang Prabang is an ancient capital located in hilly north central Laos at the confluence of the Nam Khan and Mekong rivers.  It has a metropolitan population of about 56,000.  The descent started about one hour and forty minutes after takeoff.

We landed on 7200′ Runway 06 and parked on the ramp at 12:05.  It took two hours and nine minutes to complete the trip of 438 straight-line miles.  I picked up my bag at the aft cargo hold and enjoyed the walk to the terminal.   Getting off a plane and walking to the terminal is more fun and more dignified than using a jetbridge.  Occasionally flying these prop planes to little airports is another thing I love about this airline.

Most tourists who need a Lao visa can get one on arrival.  The fee is $30 for U.S. citizens.  Having exact change is a good idea but not required.

The process for getting the visa is quick.  Because most on this flight were Thai citizens or Lao residents who had a visa or needed none, the line was short.  Even though I was one of the last to enter the terminal, it took less than five minutes to get the visa and clear immigration.

Bangkok Airways is a nice little airline.  The service is always outstanding, and planes are fairly new and in good condition.  Planes like the ATR 72-600 provide a great change of pace.  They bring back feelings of the early days of flying.  Compared to being led from cattle car to stockyard by a jet bridge, it is incredibly refreshing and cool to stroll between the plane and the terminal on a warm summer’s day.