One of the people on my recent trip to Everest Base Camp – Tibet was a salsa dancer and Beijing resident.  Santiago and I agreed that on my next trip through the Chinese capital we would try to get together at a Beijing Latin dance venue.

Latin dancing is popular worldwide.  Every major city I’ve visited has Latin dancing events on multiple nights every week.  Somewhat surprisingly, I find that Asia has the most Latin dancing venues and some of the best dancers.  Bangkok, Thailand is the city that seems to have the most vibrant Latin dance scene.  There are at least two or three places to go just about every night.

A couple of years ago in Beijing I had visited a very nice club called Salsa Caribe.  It is a large club with Latin dancing every night.  Santiago suggested a new place called YIN On 12, a rooftop bar in the New World Beijing Hotel.

At the hotel, take the elevator to the 12th floor.  YIN Bar has the entire top floor including access to the roof.  Coats and bags are checked next to the elevators.  Décor is simple and relaxing.  YIN Bar is a smoke-free venue.  Salsa, Bachata and Kizomba are on tap every Saturday from 9:30pm – 2:00am.  A 45-minute workshop starts at 8:30pm.  Admission is 60 RMB (about $9) and includes the group lesson, party and a drink.  The dress code is “dress to impress.”  That always leaves wide latitude for interpretation.

YIN On 12 has two wood dance floors inside.  The main dance floor is just past the bar.  It is slightly elevated with the DJ booth at one end.  A slightly smaller dance floor is next to the bar on the same level.  Both are excellent surfaces for dancing with dance shoes.  The club also has access to the roof.  Outside, there is another dance floor and panoramic city views.  In winter, the roof is a nice place to cool off after a few fast Salsas.

DJ “Mambo” Jack and guest DJ Kevin took over after the lesson playing a good mix of Salsa, Bachata and Kizomba.  Both dance floors were soon packed but not overcrowded.  The DJs seemed to play three songs of one dance before switching to the next.  I liked knowing that it wouldn’t be long before they would play salsa, my favorite, again. 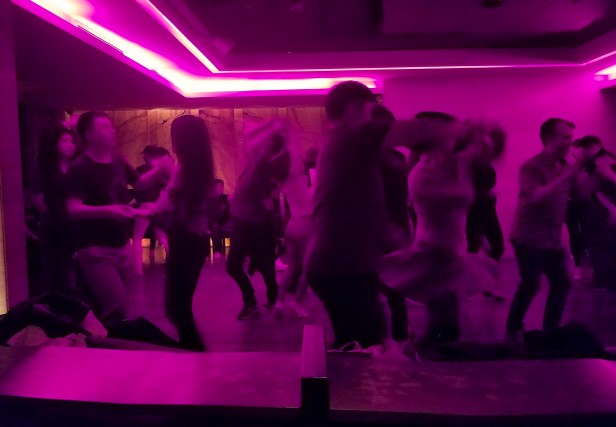 The party included five inspiring special performances.  Ace and Peach led off with a very professional routine including many lifts and tricks. 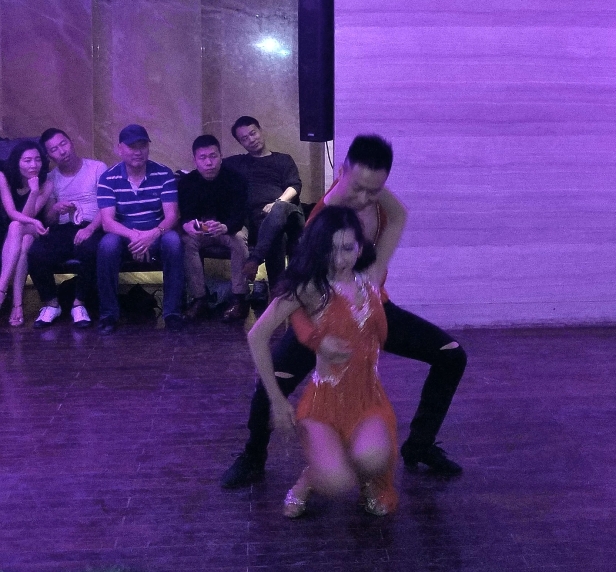 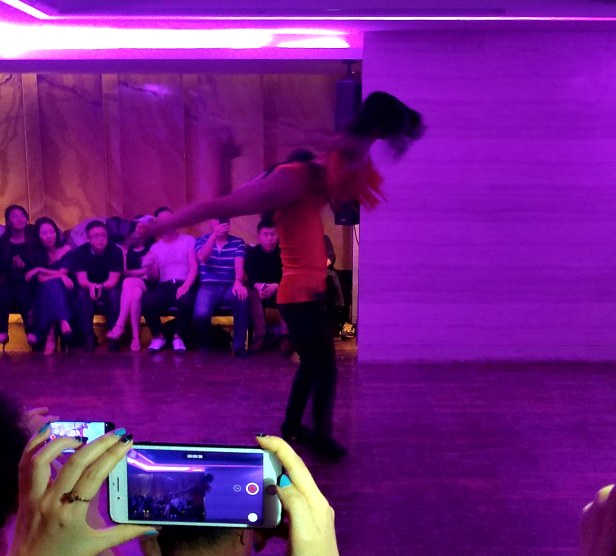 The Beijing Adolfo Team followed with a snappy group routine. 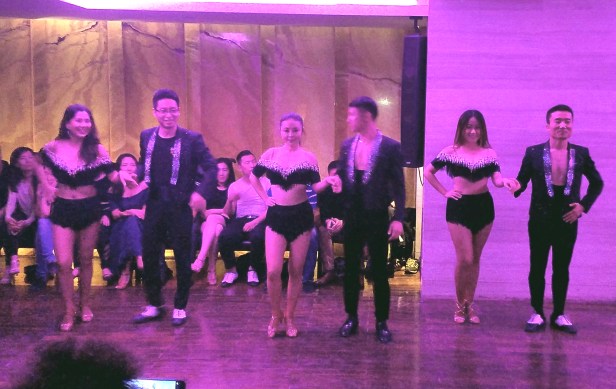 Then “Mambo” Jack & Kate, with the Phoenix Dance Company, took the floor.

After the performances the DJs kept the party going until 2.  Santiago got a chance to talk to and dance with some of his friends and I was motivated to dust of some Salsa and Bachata moves.

I really had a good time at YIN On 12’s Salsa Bachata Kizomba Night.  The crowd was friendly, very nice dance floors, good views, very good dancers, comfortable seating.  I also liked that there were equal amounts of salsa, bachata and kizomba.  YIN On 12 is smoke free, and that’s not always the case in China.  If there is a better Latin club in Beijing on Saturday night, someone please let me know because YIN On 12 was outstanding.