Global Upgrade Certificates (GUCs) are the best benefit of Delta Diamond Medallion status. They allow upgrades to business class or premium economy on Delta Air Lines or certain Delta Connection flights on any fare including pay with miles and companion fares but excluding basic economy and award tickets. GUCs can also be used for business-class upgrades with the same fares on KLM-operated, Delta-marketed flights.

I don’t fly Delta Airlines much anymore although I’ve maintained Diamond Medallion status the last few years thanks to a ton of Delta Rollover Medallion Qualification Miles and cheap business-class fares on SkyTeam partners that yield large amounts of Medallion Qualification Dollars.  My December review of various frequent-flyer accounts revealed that I had not used two of the four GUCs that I earned early in 2018.  Unless used for travel concluding before February 8, 2019, one year from the date they were issued, those GUCs would expire.  I didn’t want that.

Using the upgrades before they expired seemed doubtful because there wasn’t much time and GUCs can be very hard to use.  Delta usually opens up very little space, if any.   Going on the waiting list and hoping for a day of departure upgrade is the norm.  Amazingly, in this case, I found a $615 fare in January on Fare Deal Alert from Dallas, TX to Berlin, Germany.  Calling the Diamond Line, I was astounded when the excellent rep found flights near my ideal dates of travel where I could use the GUCs to upgrade to business class on Delta trans- Atlantic flights and the KLM flight from Amsterdam to Berlin.  Those upgrades went through at booking but I was waitlisted for the Delta domestic flights.  Go figure.

My flight to Amsterdam from Detroit, MI arrived at Gate D2.  I visited the new KLM Crown Room 52.  The new lounge is located next to but not in the old location.  The old location is also being renovated and will become part of the new lounge sometime in March.  The lounge looks great.  I requested a shower and the agent provided a voucher to use the showers at the Mercure Hotel.

Flight 1823 to Berlin departed from Gate D71.  It is about a 10 minute walk from Crown Room 52 assuming no line at passport control.  Boarding had started and I went right on board.

Business class on most European Airlines for a flight in Europe is a misnomer.  (Aeroflot being a notable exception with business-class seats that are better than US domestic first class.)  The seats are the same as in coach.  Seating is 3-3 with the middle seat blocked.  Business-class seats have only 33 inches of pitch and 17 inches of width.  That is exactly the same dimensions for Economy Comfort seats on this plane although the middle seat is not blocked.

Each row had two power outlets, one for each business-class seat.  Seatbacks have coat hooks.  I put my jacket there and the flight attendants did not hang it up.  There was no pre-departure service.

Takeoff was at 10:07 on Runway 36C (Three Six Center), Zwanenburgbaan, named after the village of Zwanenburg.

Here’s the most interesting thing about this flight:  Runway 36C was the runway used in 1992 by El Al Flight 1862, a 747 freighter that crashed shortly after takeoff in the Bijlmer neighborhood.  At that time, the runway designation was 01L (Zero One Left).  The 747 crashed into an apartment complex killing 39 plus the four occupants on board.

The runway designation changed because another runway on the same heading was added to the left and due to the migration of magnetic lines on the earth’s surface the runway is now more aligned with a magnetic heading of 000 or 360 degrees rather than 010 degrees.  Changing runway designations due to changes in the magnetic field is infrequent but not uncommon.  The 747 crashed into an apartment complex killing 39 plus the four occupants on board.

The flight attendants began the meal service in business class and snack service in coach before we leveled at our cruising altitude.

There was no beverage service after breakfast.  Folks had about 20 minutes before we started the approach to TXL. 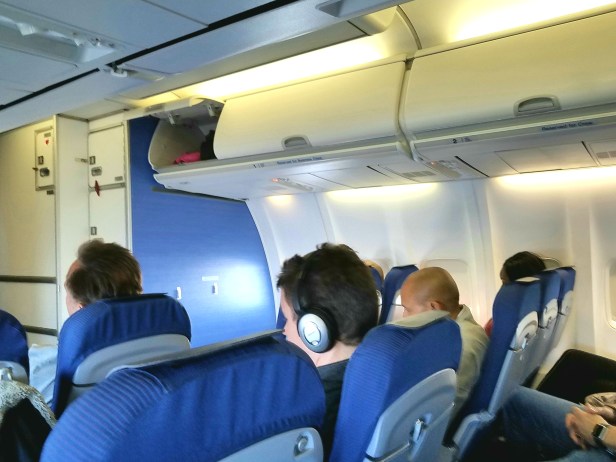 I didn’t visit the lavatory on this flight.  On Delta 737-900s they are incredibly tiny.  I’m guessing it is the same with KLM although the seat map shows bathrooms of normal size.

The 55 minute flight ended with touchdown was at 11:02 on Runway 26R (Two Six Right) and parking at the Terminal.

It had been years since I’d flown intra-Europe business class on KLM.  This flight reminded me that I had not been missing anything.  It is a wonder that anyone would pay more for this experience.  Of course if you make coach bad enough, it might be worth it.  I’ll probably find out on the return.