The 747 is probably my all-time favorite airplane.  Growing up, it was synonymous with exotic and luxurious foreign travel.  And the plane just looks cool.  My first flight on a 747 was to Europe on my honeymoon.  We were flying economy.  Still quite the experience.  Since then I’ve enjoyed numerous 747 flights across the Pacific in coach and business class as a Northwest Airlines, now Delta, frequent flyer.  For the reasons stated in the post, I still think the world’s best business-class cabin was the upper deck on a NW/DL 747-400.  Past tense because Delta retired its last 747 in late 2017.

Other posts about the trip to Bali:

This flight was greatly anticipated for a bunch of reasons.  Not only was it a 747 and on the upper deck, it was my first flight on a 747-8, the latest and no doubt last passenger version of this four-engine airplane.  And this would be my first trip to Bali, Indonesia.  The entire routing was New York (LGA) to ATL on Delta Airlines with an overnight layover.  Then a Korean Air 747-8i to Seoul, Republic of Korea (ICN) connecting to Bali (DPS) on a Korean Air A330.

The price, about $1800 round trip for business class from New York to Denpasar, Indonesia, was a great deal.  While definitely a chunk out of pocket, this fare offered great value in terms of the number of Delta Medallion Qualification Dollars and Medallion Qualification Miles (MQMs) earned.  They will come in handy in requalifying for Delta Diamond Medallion (DM) status for 2020.  MQDs are based on a percentage of distance flown not price paid when earned by flying a Delta SkyTeam partner.  All flights round trip would earn about 69,000 redeemable miles (DM bonus), 32,000 MQMs (class of service bonus), and a whopping 8,900 MQDs (.4 of total distance).

Delta’s $15,000 DM MQD threshold is the hardest for me to reach each year to keep DM status.  I’ve got more MQMs than I know what to do with thanks to racking up about 600,000 MQMs in 2014 and because Delta rolls over to the following year all MQMs over the DM threshold of 125,000.  As long as I can find an inexpensive way to meet the MQD requirement, I’ll have DM status for as long as I want.  Delta has a credit-card waiver for MQDS but recently hiked the annual spend from $25,000 to an absurd $250,000 per year.

KE 36 departed from Concourse F.  All non Delta international flights must check in at Concourse F not the main check in area for domestic flights where hotel shuttles drop off.  Getting to Concourse F from there means a shuttle bus.  The shuttle takes about 15 minutes.  Concourse F has TSA Pre but it has never been open when I’ve needed it.  In my experience though, the regular TSA line is fast.  That was also the case this time.

The Delta SkyClub was the least enjoyable part of the trip.  Lack of a true business-class (not to mention first class) lounge is probably the biggest weakness in Delta’s operations.  All SkyTeam airlines use the Delta SkyClub at ATL Concourse F.  The F SkyClub is one of the best in the system.  It has great showers, a scenic SkyDeck, and better food than purely domestic SkyClubs.

On the F Concourse, the other lounge option is the Club At ATL.  It is located across from the F SkyClub and is a Priority Pass lounge.  The booze is better, and there are showers but no tarmac views.  You won’t get help with Delta or SkyTeams flights, either.

After a short stay in the SkyClub is was boarding time.  Boarding involved a bit of the  scrum that is typical in the U.S. but it wasn’t bad.  It helps that F Concourse gates are large.  I boarded in Group 1 right after those needing assistance and people travelling with small children.  My assigned seat, 17B,  was an aisle seat on the upper deck.

I took Seat 17B initially but told the flight attendant I would like to move to a window seat if possible.  Seat 16J, a window bulkhead seat, remained unoccupied, so I moved after the door closed.

Pushback was eight minutes after the 11:55 departure time.  We taxied to Runway 27R (Two Seven Right) and departed at 12:20.

All Korean Air 747s have three classes of service, first, Prestige and economy, with Prestige Class occupying the upper deck and a section aft of first class and forward of economy on the lower deck.  For Prestige Class passengers the biggest difference between a 747-400 and a 747-8i is that the 8i has lie flat seats with all-aisle access while the 400 has angled flat seating without all-aisle access.

Apex Suites on the 8i are very comfortable.  There are 22 on the upper deck arranged 2-2.  The main deck has 26 arranged 2-2-2.  (In addition to 48 Prestige Class seats, this aircraft has six new first class Kosmo Suites 2.0 with a door and 314 economy seats.  Korean Air does not offer premium economy seating or economy plus on widebodies.  All economy seats on the 747-8i are relatively roomy – 17.2 inches wide and 33 -34 inches of pitch.)

Korean Air passengers have traditionally enjoyed very generous economy seating.  That appears to be changing at least with its narrowbody fleet.  In 2018, Korean Air became the first Asian airline to operate A220s.  Currently, it has 10 A220-300s.  All seats are economy but 25 at the front are designated as economy plus with 36 inches of pitch.  Korean Air had planned to install 24 economy plus seats on the 737 MAX 8, but that order of 30 planes is being re-evaluated.  Korean Air has not released the seating arrangement for the 30 A321neos it has ordered.  We’ll see if this seating trend translates to the widebody fleet.

Prestige seats on the 747-8i are not created equal.  Apex Suites by the window offer considerably more room, storage and privacy.

Like the Prestige Class window seats on the upper deck of Korean Air A380s, these window seats benefit greatly from large storage lockers next to the window.  The lockers and curvature of the fuselage make window seats about six to eight inches wider at shoulder level than other prestige seats on this airplane.

These compartments are huge.  They also provide a large area on top for placing items in flight and are a great place for holding blankets, pillows amenity kits and other stuff securely.  Being able to put stuff away makes the seat feel bigger.

Enhanced privacy results from the way window Apex seats are recessed from the aisle.

Even though the seats have no door, the entrance to the seat, storage lockers and distance from the aisle made this seat feel definitely roomier and more private than a Delta One suite. The Apex seat is just under 21 inches wide.  Pitch varies from 75 to 86 inches.  Not gigantic by any stretch, but this seat feels like it merits the term “suite.”  Even non window seats feel very private because the seats have high walls.

The armrest opposite the window puts seat, lighting and video monitor controls close at hand. 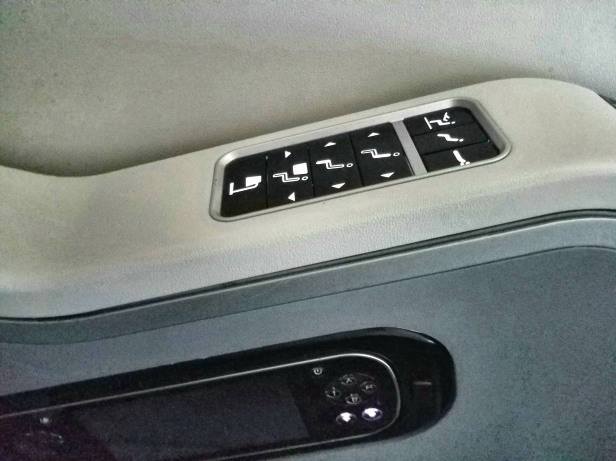 The seat can be moved to three preset positions with the touch of a button.  There are also three lighting levels for the suite.

Just behind the armrest is a compartment for securing things in flight. 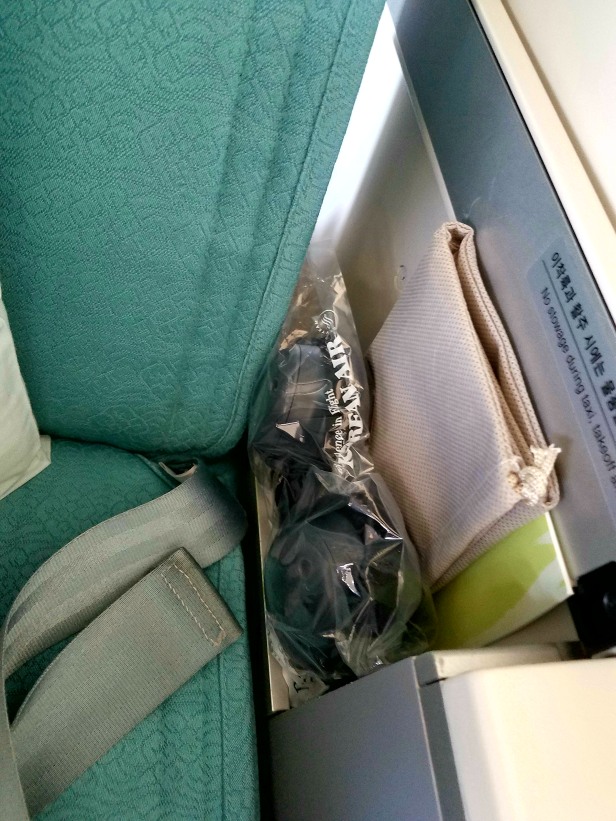 The try table ejects from the ledge in front of the armrest.  It takes only a light touch.

A moveable divider separates the window seat from its companion on the aisle.  Lowering the divider allows passengers in these seats to communicate although a bit awkwardly.  A/C and USB power is available at each seat.  Korean Air does not have internet in flight.

Additional amenities were available in the lavatories.

Service of the cheerful and efficient Korean Air cabin crews is always a highlight of any flight.  I’ve flown this airline numerous times in first class, prestige class in 777-300s and A380s with the Celestial Bar and economy and never had a bad in-flight experience.  This flight was no exception.

Pre-departure service consisted of a tray of soft drinks.  I think only non-alcoholic beverages were served in the U.S. because of liquor license laws.  Flight attendants also took dinner orders on the ground.

These are the menus from the flight: 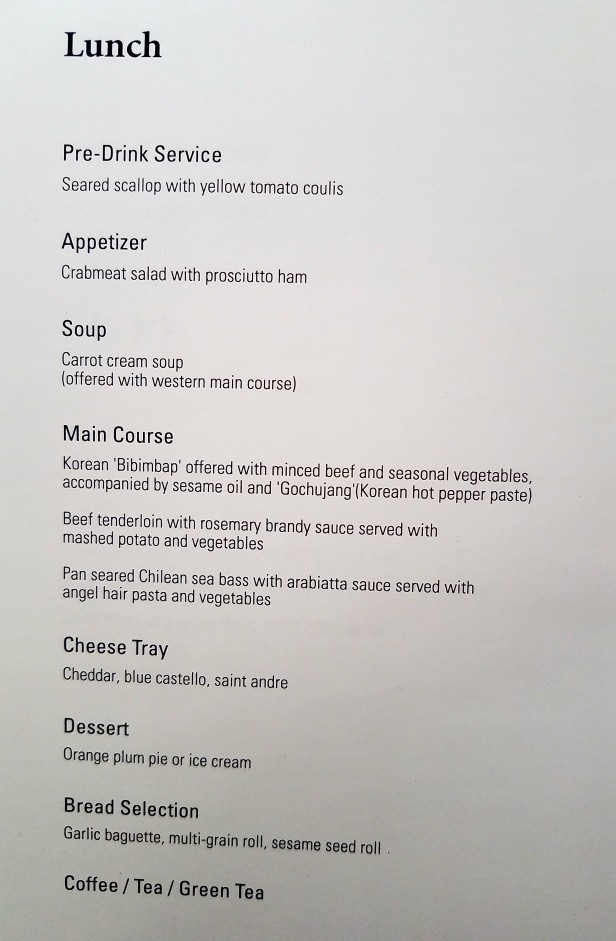 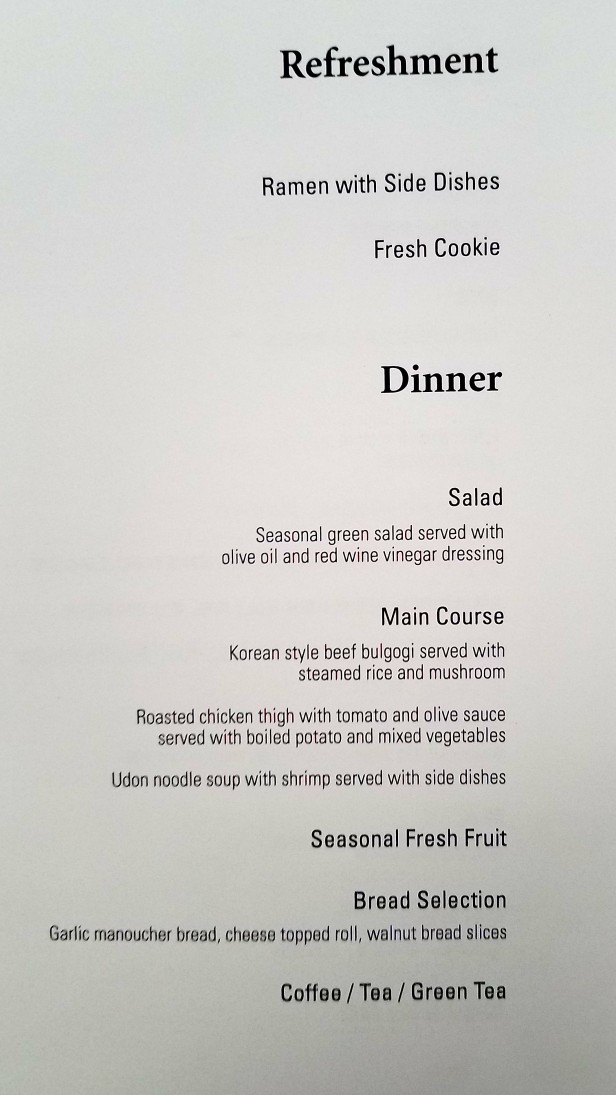 As a scotch drinker, having three choices of premium blended and single malt scotch is terrific.

We ran into turbulence and service was suspended for almost thirty minutes.  If there is any complaint with Korean Air it is that pilots do not seem to put much effort into finding smooth air.  They just ride it out and never change altitude.  I’ve noticed that on several flights.

Service resumed with the appetizer, a crabmeat salad with prosciutto. 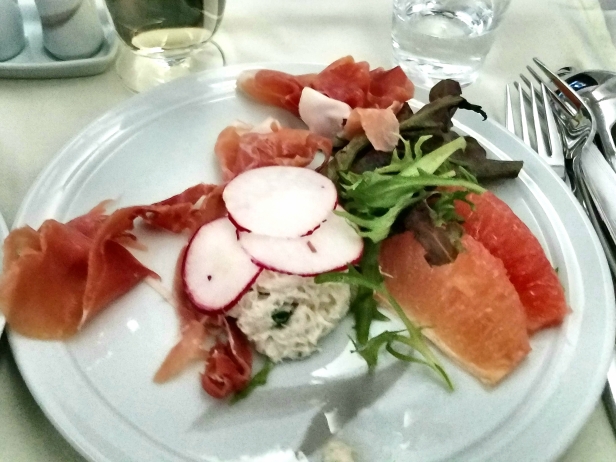 I tried the chardonnay from Chile with the appetizer but switched to Kendall Jackson sauvignon blanc that seemed to go well with the rest of the meal.

The entre was served at 14:00 about one hour and 20 minutes after the meal service began.

The long delays disrupted the tempo and overall enjoyment of the meal.  Still, everything was tasty and served at the right temperature.

Dessert with porto was last but not least.

After lunch I reclined the seat, put my feet up on the wide ottoman, and watched a movie before dozing off.  The 18 inch LCD video screen is sharp, and Korean Air has a good selection of movies, TV shows, and documentaries from around the world.  There are also news channels and games.

Flight attendants are happy to provide wake up service but I didn’t ask.  Seven hours and 25 minutes before arrival, over the Arctic Ocean, I requested a mid-flight snack.

The noodles were very tasty.  I’m starting to get the hang of eating them with chopsticks.  Shoveling and slurping seems to work best.  I wouldn’t be too proud to wear a bib.

This flight was one of the few times on great-circle routes over the Arctic when it was clear enough to see the surface.  Too bad this flight following system doesn’t display  latitude and longitude.  It would be nice to know how close we were to the North Pole.

The upper deck has two lavatories on the starboard side between the flight deck and row 16.  The proximity was not an issue for seat 16J.

The arrival meal was served 90 minutes before landing.  I chose the chicken thigh entree, one of my favorites.

There was plenty of time after the meal to prepare for landing.  The IFE system displays a lot of useful information like flight connections and airport services.

Our landing approach at ICN was from the south to Runway 34.  We landed in light fog at 16:15 local time.

The only drawback to the 747 upper deck is the narrow staircase that must be navigated getting on and off.  At least Korean Air uses tread lights to make the stairs look stylish.

It was a pleasure to fly with the Queen of the Skies again.  While there are more seats than on the Delta 747 upper deck (22 seats versus 14 on Delta), window Apex Suites provide tremendous individual privacy and storage.  Compared to seating on KLM 747-400s that also have 2-2 seating on the upper deck, the Apex Suite is far superior.  Korean Airlines will be flying the 747-8i for years to come.  I recommend the Korean Air 747-8i to anyone feeling nostalgic for the 747 or just wanting a flight with great service and a great business-class seat.

Over the Arctic Ocean north of Prudhoe Bay and Barrow, AK.