Qantas’ First Class Lounges are some of the best airline lounges in the world.  Its First Class Lounge at Sydney Kingsford-Smith Airport is reputedly the best of the lot.  I have been to the Qantas First Lounge at Los Angeles International (LAX).  It was wonderful as are the Cathay Pacific Pier and Wing first class lounges at Hong Kong.  Would this lounge be better?

The entrance to Qantas’ First Class Lounge is located in Terminal 1 post security on the 3rd floor, one level up from the duty free shops.  A rather plain lounge entrance belies the beauty that awaits.

There is nothing behind the doors except an empty room that just leads to an escalator to the 4th level.  With terminal space at a premium, it is surprising Qantas has not put this area to good use.

Check-in is at the top of the escalator.  For anyone who is unsure if they have access, it is a long walk from the entrance to find out.  Some say Qantas stations a representative behind the entrance door to check access eligibility.  No one was there when I entered.

Four groups of passengers have access to this lounge:

To be eligible to enter, members of these groups must have a next flight that day that meets the following requirements:

Even though I was travelling in economy on my next Qantas flight to Dallas, I was able to experience the First Lounge thanks to Oneworld Emerald status.

Purchasing access to the Qantas First Lounge is not an option.  That could cause problems when traveling with more than one associate or several children.

Boring nitty gritty details out of the way, take a look at this spectacular lounge.

The First Lounge is one long room with a central passage separating the interior and exterior spaces.  The curving wall of windows angles outward providing excellent views of the ramp and the Sydney skyline in the distance.  The view is almost like looking through a wide-angle lens.  The gently arching exterior creates a visually appealing space as do the decorative support beams and high ceiling. 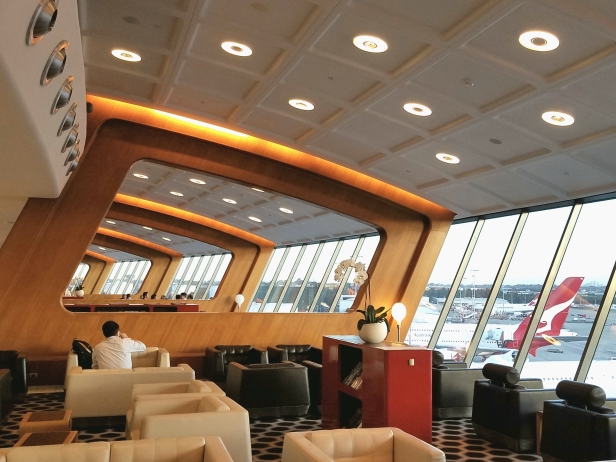 A380s from Qantas and other airlines park below the lounge.

The First Lounge is renowned for its a la carte restaurant.  And the kicker is there is no charge for anything in this lounge.  A long layover afforded the opportunity to try the menus for breakfast and all-day dining.

Dining areas are located in the center of the lounge and have outside views.

The bar is located across the central passageway from the dining areas.

Here is the breakfast menu from my visit:

I sat down in the restaurant.  A waiter appeared and took my order.  About 10 minutes later, he delivered an omelette, toast and a mimosa.

A few hours later, I came back for lunch/diner. 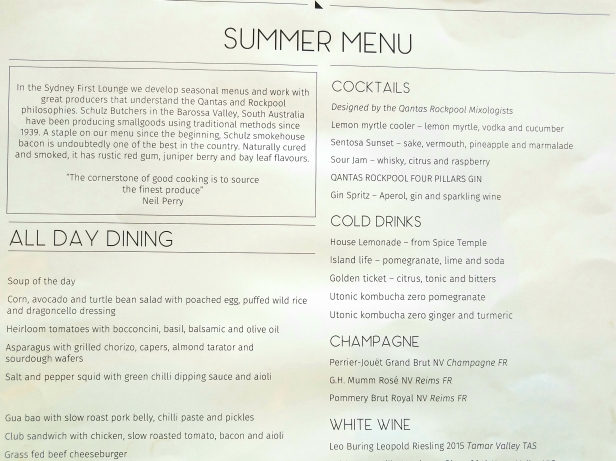 Guests can order any combination of appetizers, entrees and desserts.  I was in a seafood mood.

The food and service were outstanding.  My only issue was a minor one – the silverware.  Maybe the cutlery is actually really expensive or boasts a designer pedigree, however the knives and forks reminded me of my high school cafeteria.

The First Lounge has an outstanding spa.  It is located to the extreme left as one leaves the check-in counter.  Two attendants are on duty.  Appointments must be made at the check-in desk.

The spa offers a greater range of services than most spas in airline lounges. 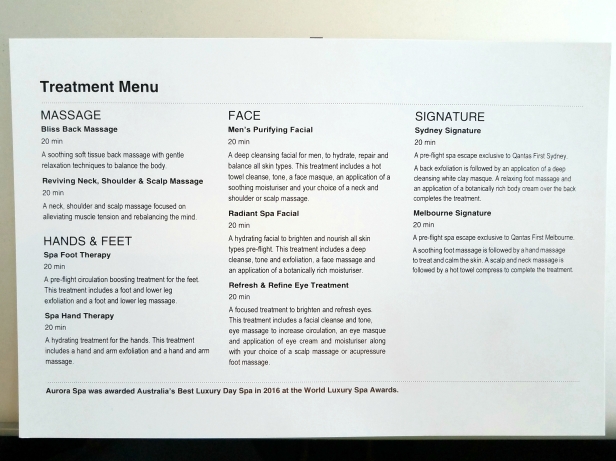 In contrast to massage facilities in American Express Centurion Lounges in the U.S., the First Lounge spa has the aura of a bona fide spa. 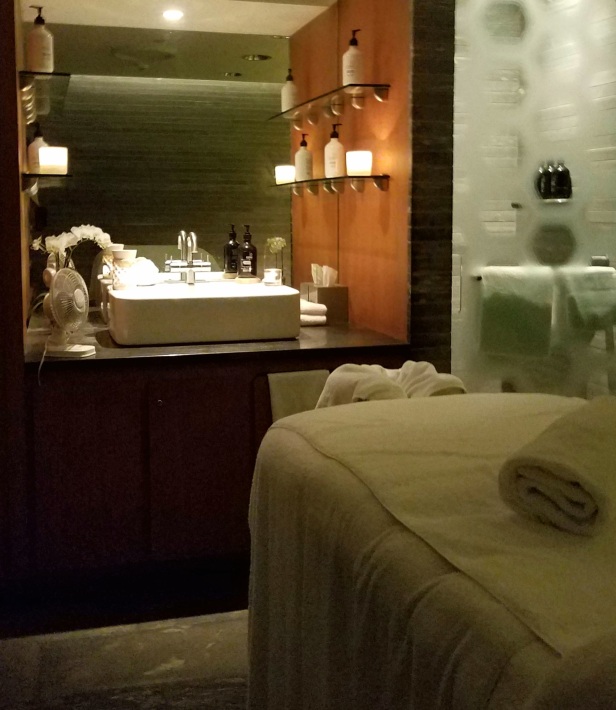 I give both treatments an A+.  They were good enough to greatly improve my attitude and take some of the sting out of my travel mistake in Bali.

Qantas supplies Apple computers for anyone needing a machine to get online. 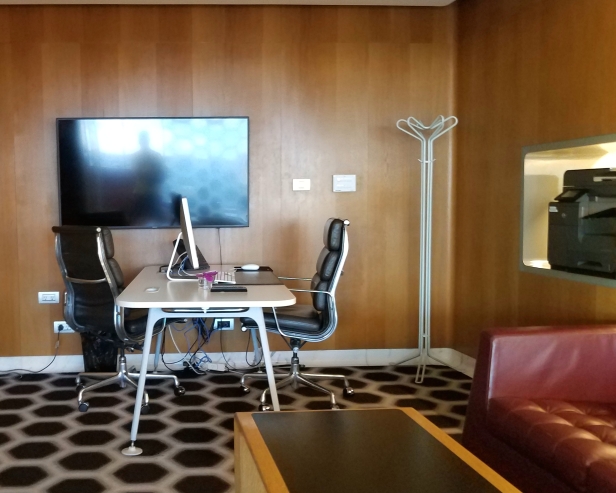 Every lounge worth its salt that serves long-haul international flights must have  showers.  The First Lounge meets this requirement with spacious facilities that come stocked with amenities.  There are spa showers and showers outside the spa. I used one of the showers that are located behind the bar.

All in all, the Qantas First Lounge is one of the best airline lounges I’ve visited.  The restaurant and spa make this lounge standout.  Heavy wooden beams, views of the tarmac and the Sydney skyline, and the arc of the window wall create a pleasant and soothing feel.  In this case, a layover of eight hours and 10 minutes was a pleasure even if it did require spending $40 for an Australian visa that I did not use – yet.