Priority Pass provides access to over 1,000 airport lounges and restaurants worldwide.  Priority Pass lounges can be a lifesaver where the airline or airline alliance you are flying with don’t have lounges of their own or you don’t have access.  Membership is available through purchase from Priority Pass or, more economically, as a perk of holding a growing number of premium credit cards, including American Express Platinum, Chase Sapphire Reserve, and Citi Prestige cards.

There are wonderful Priority Pass lounges that are on par with or even better than good airline international business-class lounges.  Off the top of my head, the Dnata Lounge at Singapore’s Changi Airport (SIN) Terminal 1, the Asiana business-class Lounge at Seoul/Incheon (ICN) (when flying Asiana), the remodeled Air France/KLM lounge at Bangkok, Thailand (BKK) and the Turkish Airlines lounge at Washington Dulles Airport (IAD) are some of the best I’ve visited.  Even average Priority Pass lounges offer free food and beverages that are better than what you’ll find in the domestic lounges of US airlines. 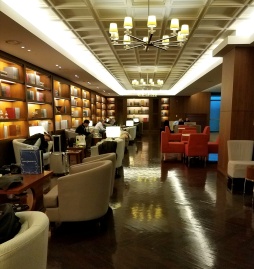 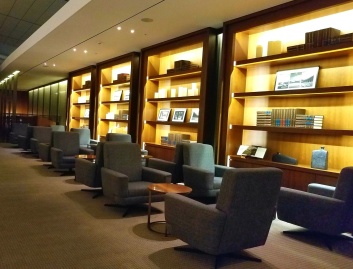 In stark contrast to other Priority Pass lounges, the VIP Lounge Costa Rica at San Jose, Costa Rica (SJO) is one of the worst airport lounges I’ve had the misfortune of visiting.  This lounge is located in the basement near Gate 5 with no outside views.  It is open from 04:30 to 20:00.

Suffice it to say that the buffet food (primarily pastries) and lack of free alcoholic beverages makes American Airlines domestic Admirals Club fare look lavish.  Anyone who has ever been to an Admirals Club knows how bad that is.  Most seating is at tables or high-top stools.

Passengers holding a MasterCard Black credit card issued in Central or South America can use a separate area of the VIP Lounge with a separate entrance.  Presumably that area is nicer.  It, however, is inaccessible to members of Priority Pass who don’t happen to have that credit card.

Priority Pass members are better off skipping the VIP Lounge Costa Rica.  Although it is a relatively small international airport, Juan Santamaria Airport has a large food court airside and many other options for food and beverages situated close to the gates.  If you must pay for a repast, you might as well go a spot that is serving the food you prefer.