Flying first class on a top-rated international airline is truly a special experience.  The  problem is that I find myself with too much I want to share with readers.  Writing does not come easily for me and trying to combine brevity with thoroughness only makes the process even harder.  Anyway, here’s my review of an outstanding flight.

Other posts about the trip to Japan during Sakura season:

The primary motivation for this trip was to take advantage of what I think is the best deal in travel – flying in first class roundtrip from the United States to Japan for only 120,000 ANA miles.  Once in Japan I planned to do some of the things I’d missed previously.

First, was seeing Sakura season.  Over the years, I’d heard a lot about the cherry blossoms in Japan, but was awed to see it in person.  The effect that these blossoms had on the Japanese people was like a spiritual experience.  Second, I hoped to see Mt. Fuji, a sight that had always been obscured on previous visits.  Last but not least, the trip would be a chance to drop in on my nephew who is in the Marine Corps and has been stationed on Okinawa for nearly three years.

I started the short walk to Gate 10 from the outstanding Untied Airlines Polaris Lounge a few minutes before 16:45, the scheduled boarding time.  Upon reaching the gate I found  that boarding and departure were delayed by 15 minutes.

Passengers flying in first class and those with ANA Diamond status boarded through a lane that was separated from the area where passengers in business class, premium economy and economy lined up.  ANA and many other foreign carriers do a great job of establishing an orderly and efficient boarding process even at gates that were not designed to handle widebody aircraft.  It is simply a matter of allocating resources and staff to create and mark boarding lanes and ensure passengers line up properly. 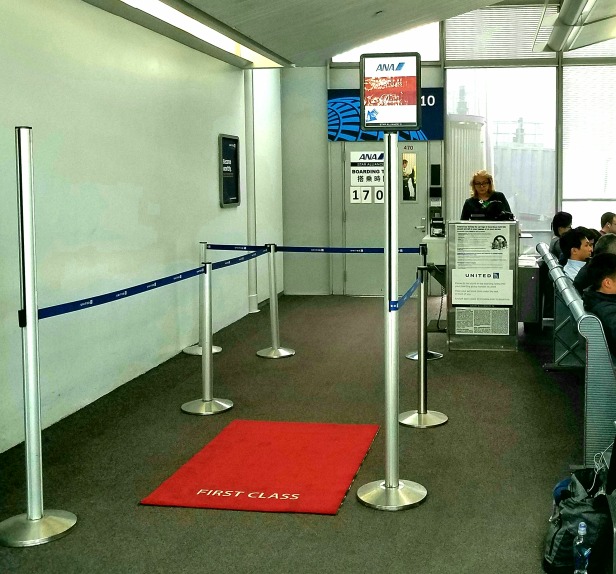 First class consists of eight open suites arranged 1-2-1.  The cabin is located at the front of the aircraft directly behind the flight deck and first class galley.  My seat was 1K, the window seat in the first row on the starboard side.

First-class seats are 33 inches wide from the outside of the armrests and have 76 inches of pitch.  The seat converts to a flat bed of course.  Armrests and ottoman are wide and well padded.

The trend in international first class is to add a door for maximum privacy like the Etihad First Class Apartment,  China Southern Platinum Suite, or Singapore Airlines suites for example.  I didn’t miss having a door on this seat.  The cabin was extremely quiet.  There was little movement in the aisle.  This seat has a high wall next to the aisle that creates more than enough privacy to feel completely comfortable.

Locating the seat features was a bit like a treasure hunt.  Many of them are hidden behind panels.

Seat controls are located close to the right hand.

The tray table slides out from beneath the video monitor.  It unfolds to create a large space for working or dinning.  Mounted on the console by the window is a small tray that swivels outward.  It is a perfect place to put drinks and snacks without deploying the tray table.

A compartment under the ottoman is ideal for keeping pajamas and the blanket out of the way until needed.

ANA supplied passengers in first class with an amenity kit in a shiny blue hard case (which I presented to my nephew when I met him on Okinawa), slippers, shoe horn, blanket, pajamas, and a sweater.  Before takeoff, flight attendants came by with a basket of additional amenities.  Dental and shaving items were available in the bathrooms.

There was a lot of activity in the cabin prior to aircraft pushback at 17:36.  While the seven passengers were settling in, the purser and two flight attendants introduced themselves and talked with each passenger, distibuted Japan customs and immigration forms and warm moist towels, and offered a beverage service.

They also handed out cards with WiFi login codes.  Each code was good for 100mb of free WiFi usage.  More cards were available if a passenger used more data than that.

ANA is one of only 11 airlines in 2019 worldwide to be awarded a Skytrax five-star rating.  On April 1, 2019, ANA received this prestigious honor for the seventh consecutive year.  That means ANA has one of the best ground and in-flight passenger experiences in the world.  It is an understatement to say I was looking forward to seeing if ANA deserved the high praise.

Here are the menus for the first meal service. 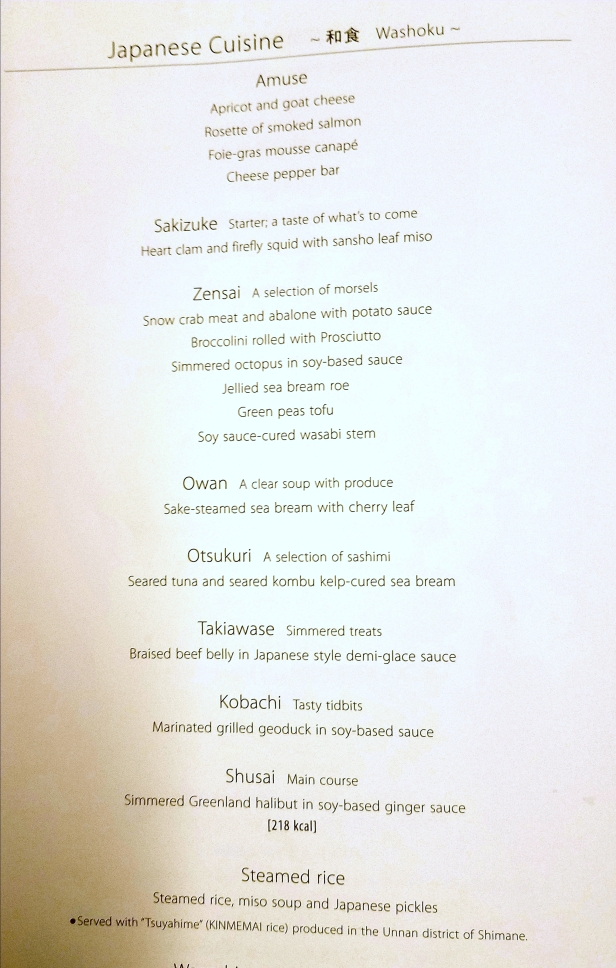 The wide range of beverages are displayed in slideshow format.

I intially selected a Japanese meal but changed to an international selection after asking the flight attendant about Japanese catering at ORD.  She suggested that waiting until the return from Tokyo would be the best time to try ANA’s Japanese fare.  Done.

There was no doubt about the initial beverage.

A very substantial amuse bouche was served immediately after Krug. The foie-gras and goat cheese were outstanding.

The attendant then set a lovely table, but I think not as nice as the table Qatar Airways sets in business class.  That’s not a knock on ANA.  It is a huge compliment to Qatar which has the world’s best business class seat and service.

I selected a white wine to go with the rest of the meal. 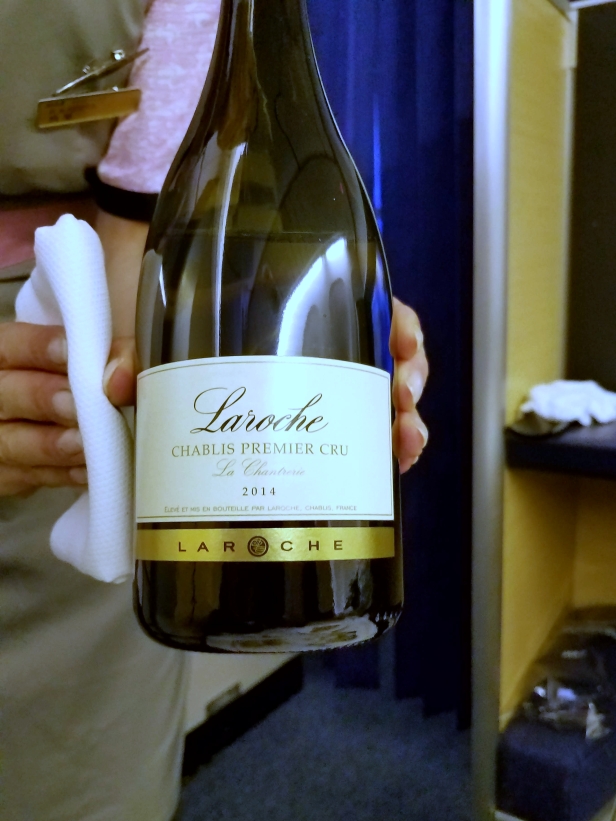 I was feeling full even before the entrée but “forced” myself to continue.

The seabass and sauce were melt-in-your-mouth good.  I never eat as well as I do in first class.

The attendant offered dessert which I could not turn down. 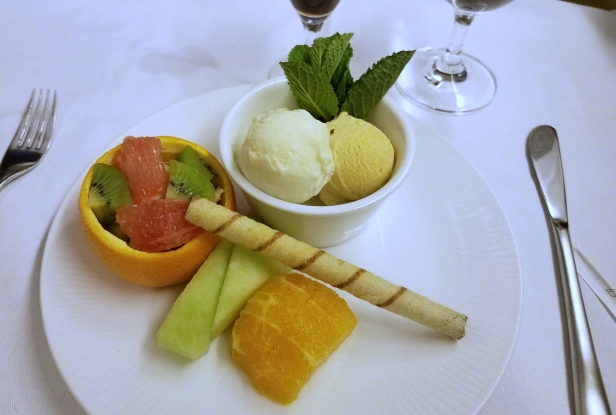 I admit to being a very slow eater.  However the attendants never rushed the service.  That often happens in business class.  Even though my pace of eating is slower than most, the attendants presented each course only when I was ready and everything was served at the correct temperature.  Nearly 90 minutes elapsed between serving the Krug and dessert.

In terms of taste, appearance, service and everything else, I give this meal five stars.

Before arrival I tried a Japanese snack and sake. 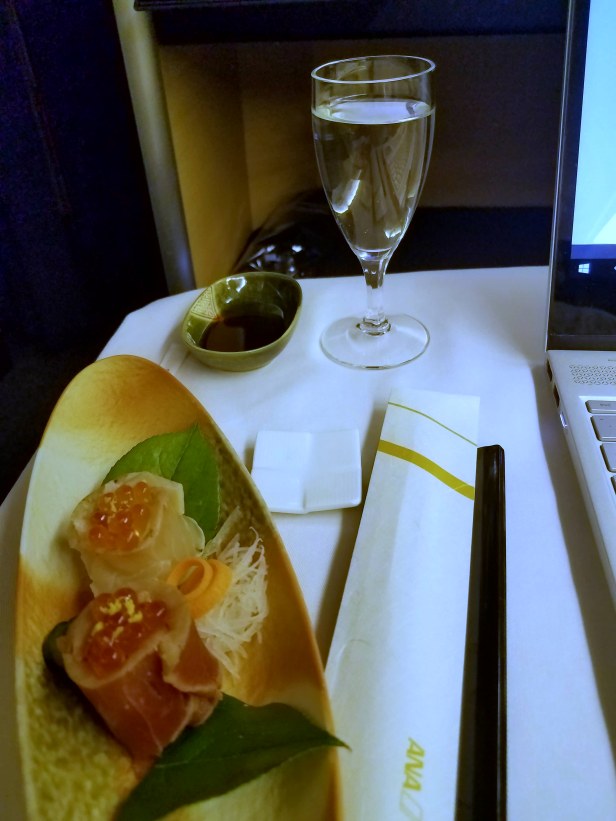 The first meal was very filling.  So afterwards I was ready for a nap.  While I changed into pajamas, the attendant reclined the seat to its fully flat position, put down a covered mattress pad and added another pillow and a duvet.

The width and thickness of the mattress made sleeping on the seat just like sleeping on a bed.  I slept well for about six hours.

There are two bathrooms for first class just aft of the cockpit.  These bathrooms come with amenities and a unique toilet/bidet. 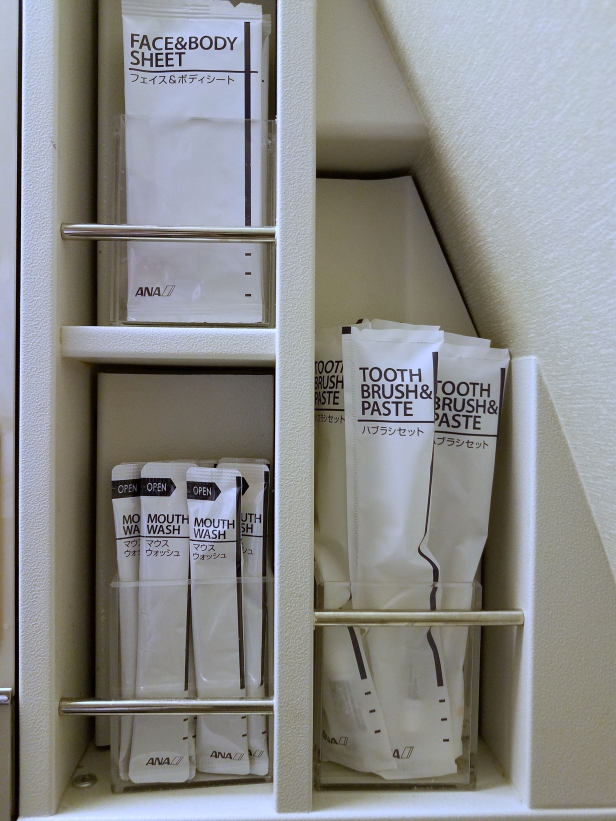 A large video monitor is positioned directly in front of the seat.  The picture is clear and sharp.  Noise-cancelling headphones deliver excellent audio quality for all  entertainment options.

The free WiFi was more than adequate for doing email, social networks and surfing the web.  For those not in first class, ANA only charges $19.95 to connect for the whole flight.

If a medical issue crops up ANA has you covered with an amazing array of equipment and services.  Tablet devices carried by ANA cabin attendants are installed with communication tools to communicate about initial diagnosis and treatments in 17 languages.

Further, ANA stocks flights with a wide range of medications and medical equipment.  There are well-stocked first aid kits containing over-the-counter medications for pain, digestive issues and colds and a special physicians emergency medical kit containing devices and medications that a doctor can use.  Resuscitation kits and an automated external defibrillator are also onboard.

ANA Flight 111 landed at Tokyo’s Haneda Airport at 20:18  local time after covering 6,384 statute miles.  I was glad to be able to walk around after a long flight but would have gladly stayed on board to be treated to more great ANA food, wine and service.

Comparing this flight to flights I’ve taken in first class on four other Five Star Airlines (Ethiad, Japan Airlines, Cathay Pacific, and Asiana Airlines), I feel that ANA definitely belongs in the same class.  The exquisite service of the flight attendants, the quality and quantity of food and the ability to mix and match dishes and set your own time for dinning, the wine list (including all the Krug champagne one cares to drink) are at least the equal of those other airlines.  I especially appreciated that the flight attendants paced the meal service to meet my slowing-eating habit and the food was always presented beautifully and at the correct temperature.  While the seat does not have a door, seat comfort in upright and lie flat positions is outstanding.  Free internet is another plus.  Indeed I found this experience to be the best travel deal I’ve found.