My hotel stays in Tokyo were definitely a tale of two cities.  First was the $75/night, 11 square meter room at the b Akasaka- Mitsuke hotel.  It is a nice hotel in a great location  but, in terms of luxury, that hotel is one the other end of the scale from the second hotel, the Ritz Carlton Tokyo.

Other posts about the trip to Japan:

This was my first stay at a Ritz Carlton hotel.  And the Tokyo Ritz Carlton is not just any Ritz Carlton.  Marriott puts this hotel in the newly created Category 8, its highest hotel tier.

Marriott assigns categories based on average hotel rates.  Since Tokyo has generally pricey hotel rooms, it is not surprising that the Tokyo Ritz Carlton would be a Category 8 hotel.  I wasn’t shelling out the big bucks though.  Instead I used Marriott Bonvoy points.  (I still can’t get used to that made up word.)  This hotel is expensive even with points.  It takes 85,000/night for a standard room.  My three-night stay cost a whopping 255,000 points.  Although I question assigning a fixed monetary value to points and miles, if you value Bonvoy points at $.007 as some bloggers do, then this “free” stay cost $595/night in points.  Would it be worth it?

My first indication that staying at the Ritz Carlton Tokyo was special was when I got in the taxi at the Akasaka – Mitsuke subway station.  It was hard to keep from grinning when I said “the Ritz Carlton, please.”  Its kind of one of those cool phrases like “follow that car” that I never thought I’d get a chance to say.  I didn’t look the part, but without any prior thought, the image of Cary Grant flashed through my mind.  Anyway, this driver was sufficiently impressed.  His posture improved immediately.  He became alert and attentive.

The Ritz Carlton was built in 2007 and extensively renovated in 2015.  It is located in Midtown Tower, the second tallest building in Tokyo.  There are 245 guest rooms including 35 suites.  The lobby is on the 45th floor.  Many displaced lobbies (i.e. not on the ground floor) are small and unimpressive.  That’s not the case here.  The lobby is large, has high ceilings, and is elegantly furnished.

At check-in the clerk assigned a standard room on the 49th floor but promised to move me to a suite the next day.

An employee in a kimono escorted me to the room and informed me about its features and things like the spa, fitness center, and restaurants. 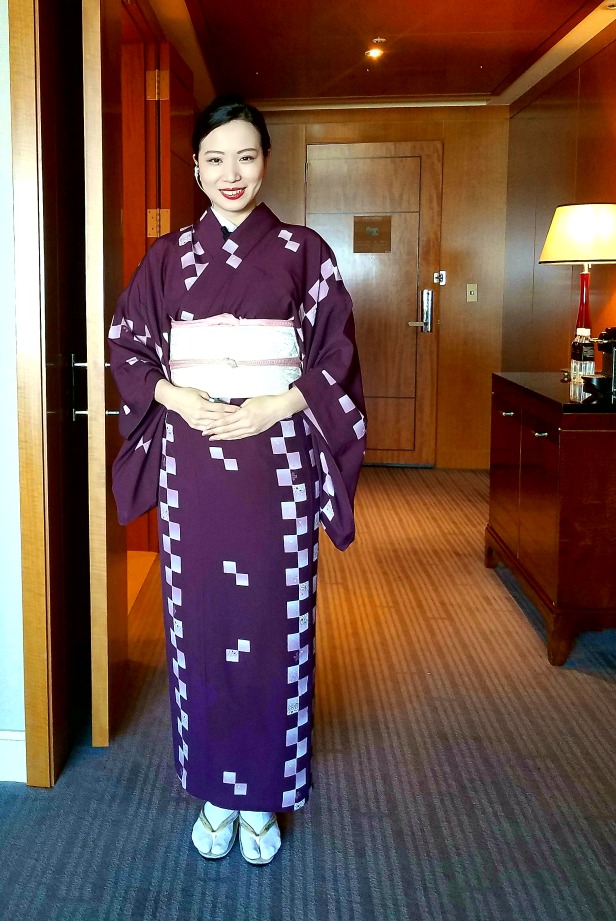 Someone left a tasty present on the desk.

All rooms that are not suites are 52 square meters in size.  This room has two double beds, an over-sized marble bathroom, and great Tokyo views.  Deluxe Rooms are the least expensive room. 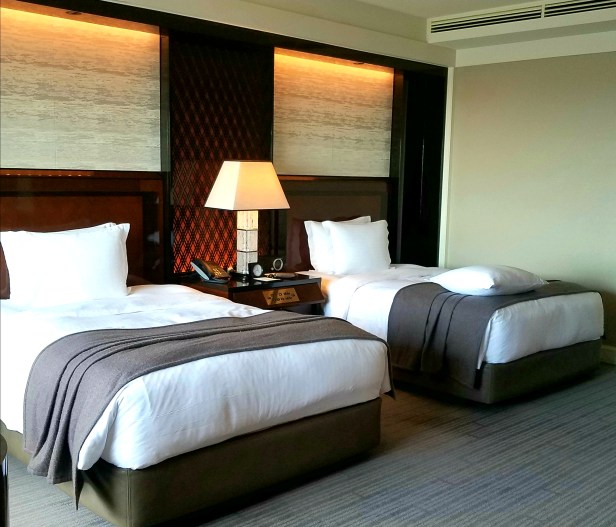 Controls for lights and window shades and USB ports are located on the night stand between the beds. 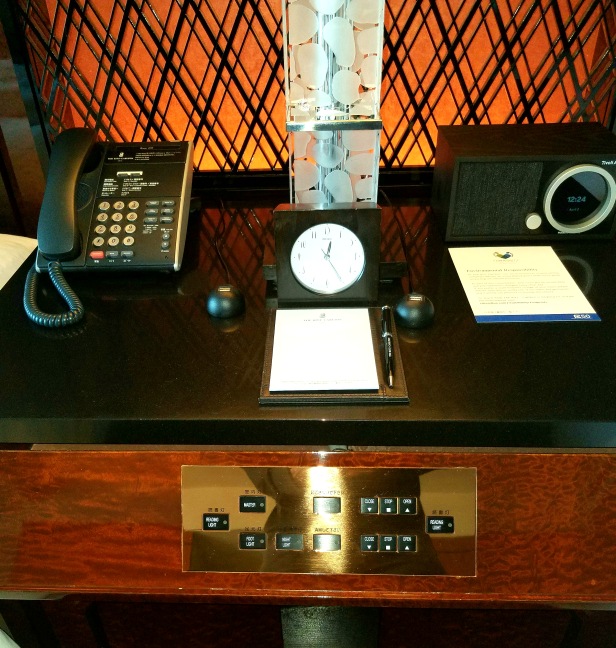 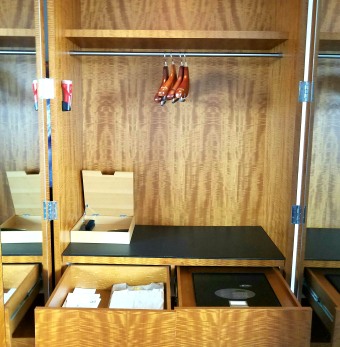 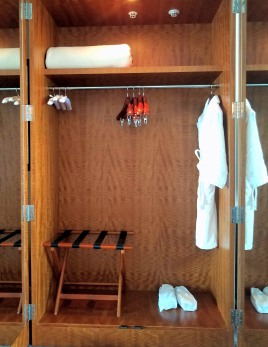 The view from the floor-to-ceiling windows makes it seem like you are living in the clouds. 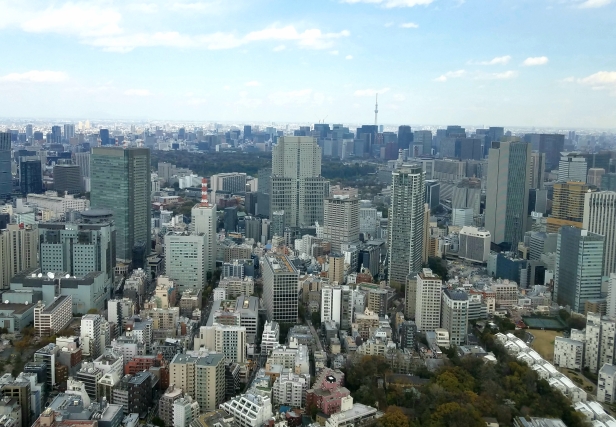 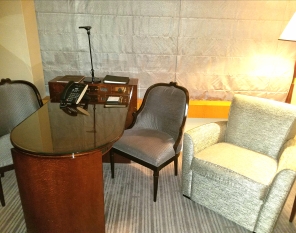 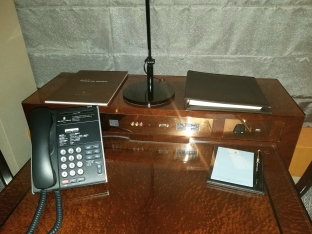 The bathroom has everything.  Separate shower and soaking tub, double vanities, TV, phone, and toilet with built in bidet, . 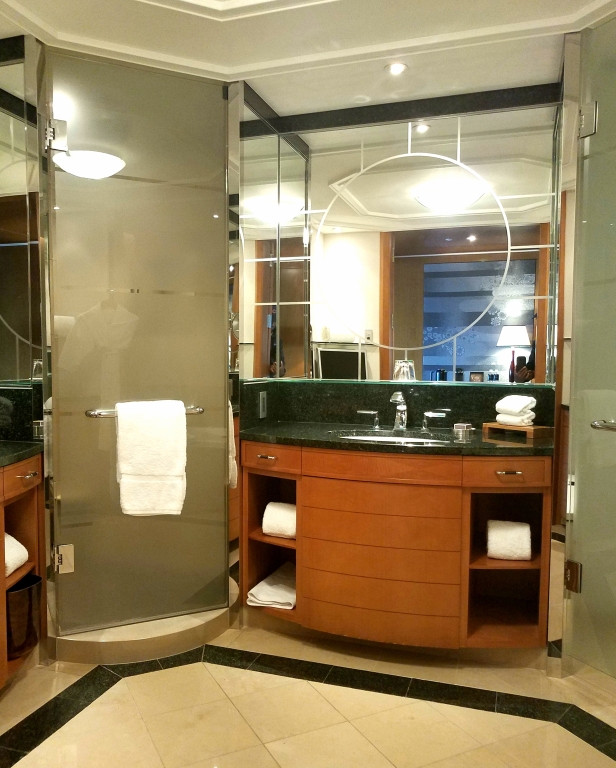 Showers and tubs have Asprey shower gel, shampoo and conditioner. 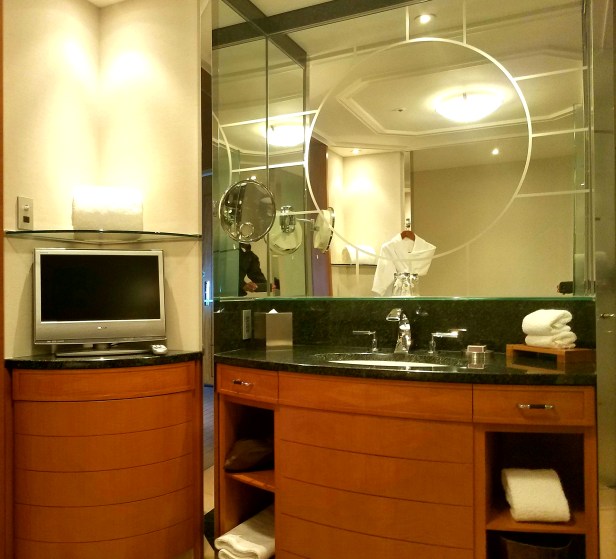 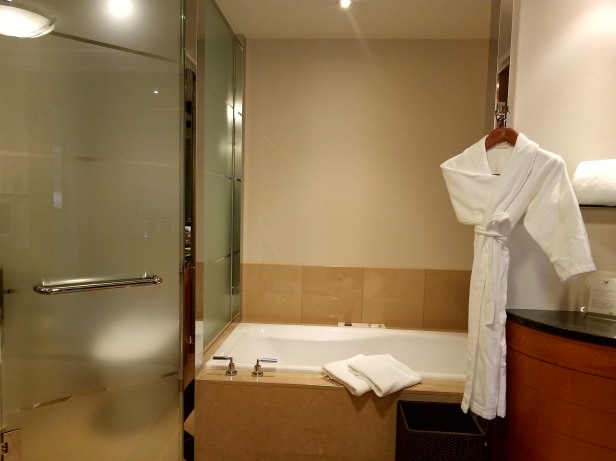 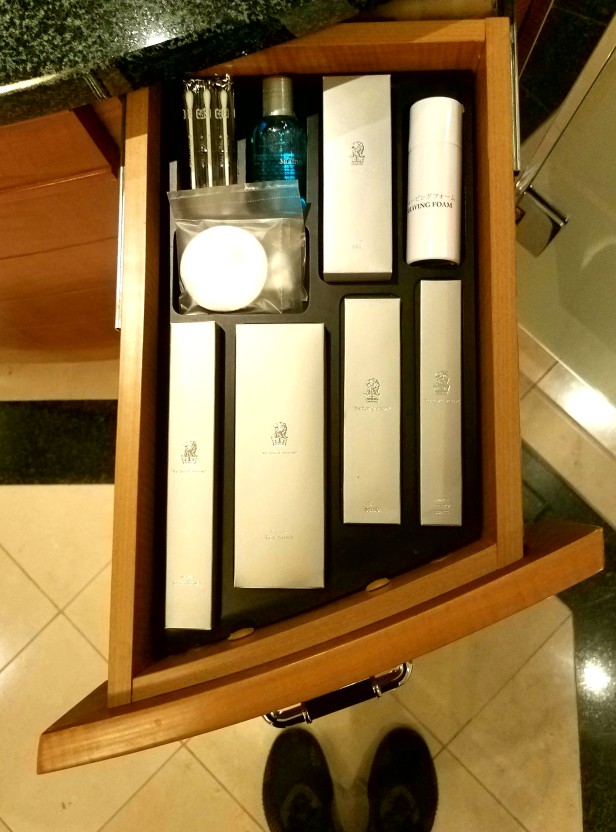 Each vanity was packed with terrific amenities including quality dental and shaving kits.  I admit to taking a couple of the shaving kits and Asprey body lotions.  They will come in handy during future travels.

I think it is okay to take items like that from a hotel room.  On the other hand, except for maybe a bottle of body lotion or something I planned to use at the hotel, I wouldn’t raid the cart the maids leave in the hall.  What is your policy on taking hotel supplies like shampoo, lotion or writing pens?

There are nine types of suites at this hotel ranging in size from 80 square meters for the Executive and Millennia Suites to 307 square meters (over 3,000 square feet) for the Ritz Carlton Suite.

I moved to a Tower Suite for the last two nights of my stay.  There are two Tower Suites.    Each one is 100 square meters (about 1,000 square feet) in size.  Only the Carlton, Presidential, and Ritz Carlton suites are larger.

I didn’t have a “geisha” escort this time but managed to figure things out.  Except for a separate living room and giant walk-in closet, this suite and a Deluxe Room are very similar in furnishings and features.

An entry hall with a minibar leads to the living room.

This minibar is identical to the one in the Deluxe room. 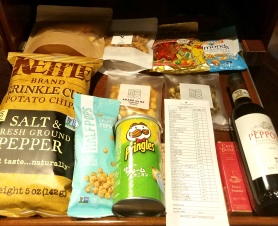 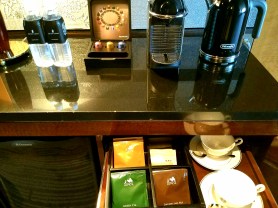 The living room is furnished with a couch, armchairs, coffee table, desk, and TV.  The TVs in the living room and bedroom appear to be bigger than the one in the Deluxe Room. 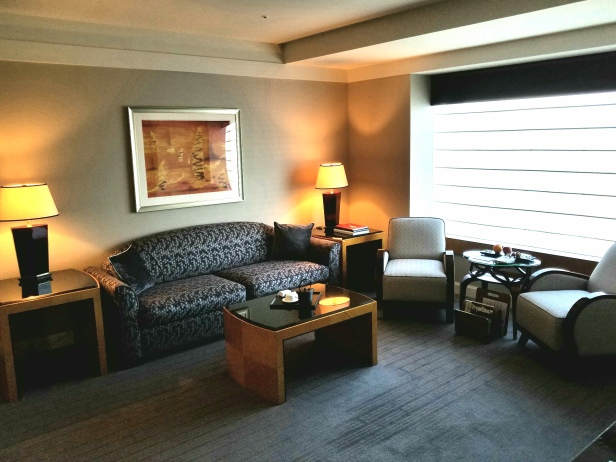 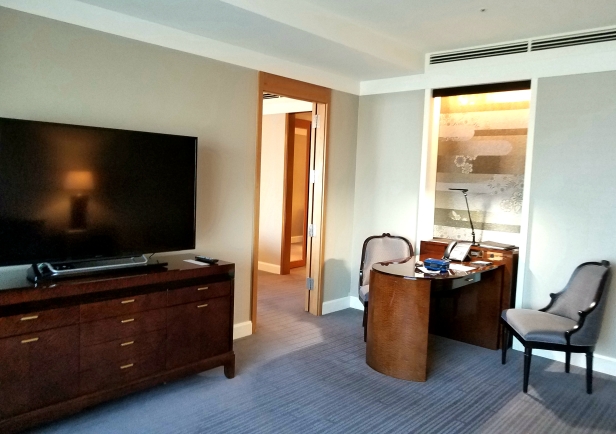 The bedroom has one king sized Sealy bed with Frette linens, a siting area, TV and dresser.  All TVs have many Japanese and international channels as well as many channels in English. 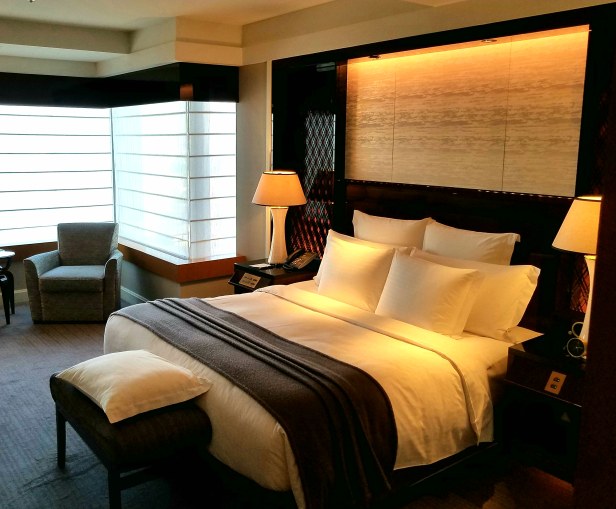 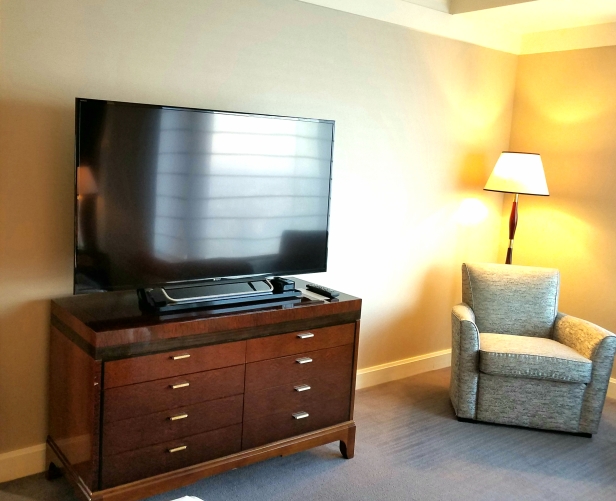 Windows have two remotely controlled shades.  A sheer shade blocks part of the light and permits fuzzy outside views.  The blackout shade blocks all light and outside and views.

This suite overlooks Tokyo Tower (perhaps the source of the name). 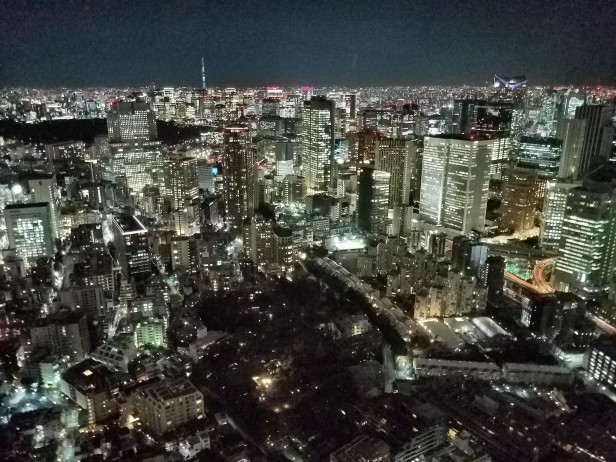 The bathroom is almost identical to the one in the Deluxe Room so I won’t go over that ground again.  One major difference is the Tower Suite has a gigantic walk-in closet. 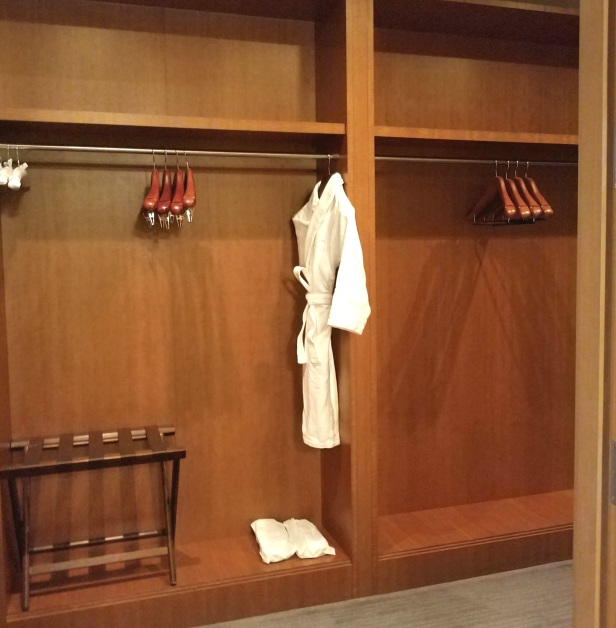 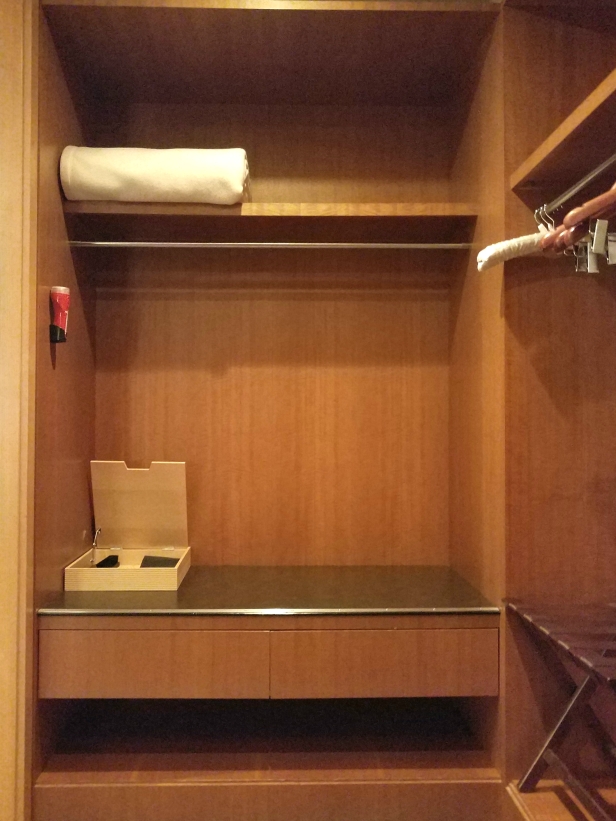 Tower Suites come with complimentary shoe shine service, pressing service, and assistance for packing and unpacking.  I used the pressing service for one of my shirts.  I left if hanging in the closet when I checked out.  When I returned from Okinawa, the Ritz had the shirt delivered to my hotel at the airport and charged me nothing.

The Deluxe Room and Tower Suite both looked great although I was slightly disappointed in the décor.  It is hard to put my finger on, but I didn’t get the feeling of over-the-top luxury that I had envisioned with the Ritz Carlton brand.  I was much more impressed by the furnishings and décor in the substantially less expensive Park Hyatt Saigon.

As mentioned above, hotels with lobbies not on the first floor tend to have unimpressive lobbies.  The Ritz Carlton Tokyo is an exception.

At dusk, staff dressed in traditional Japanese clothing (I refer to as Geishas though they are not), perform a candle lighting ceremony. 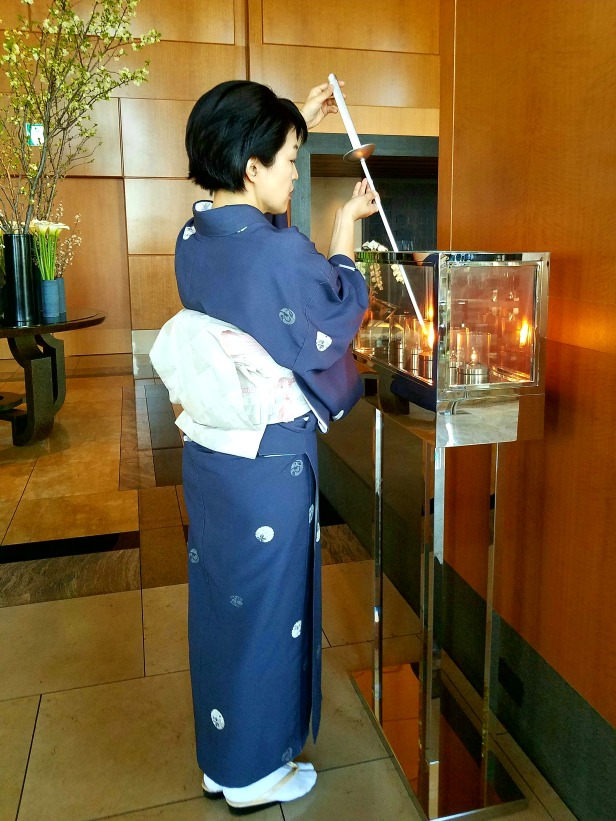 Bonvoy Benefits at Ritz Carlton – Luxury Not So Much

Being legacy Starwood, I was rolled into Marriott Rewards (now Bonvoy, gack) when the programs merged last year.  With over 1,300 combined lifetime nights between Starwood and Marriott, I was assigned Ambassador and Lifetime Titanium status in the new program.  My Ambassador status will expire next year because, even if I exceed 100 earned nights at Marriott properties, with free earned nights and 15 nights earned by virtue of holding a Marriott credit card, my spend will be much less than half of the $20,000+ now required to earn Ambassador status.

Not having an Ambassador won’t be as big of a deal as losing Your24, the benefit that supposedly allows checking in at any hour.  Your24 is now available only to those qualifying for Ambassador status.  Under SPG, that benefit was acheived at 75 nights without any spend threshold.  Bonvoy moved my Your24 cheese big time.  For all practical purposes, Your24 is now unattainable.  Having the option to check in and depart at 22:00 or some other strange hour has been very useful in accommodating airline schedules especially sine the lowest cost flights usually depart at some of the least desirable times.  So the Bonvoy program made me a little miffed to begin with.

At the Ritz Carlton I got a suite upgrade and a nice “thanks for your loyalty” remark.  That and a 20% discount on a la cart dining and drinks in the restaurants on the lobby level is about all of the special benefits a Bonvoy Ambassador is entitled to.  You don’t get breakfast or lounge access at the Ritz.  As a solo traveler, those benefits are more important to me than a suite.

The reason I was slightly disappointed in the level of luxury may be because the extremely luxurious club lounge and splendid breakfast buffet are off limits to lowly  Marriott Ambassadors.

The Ritz Carlton credit card gives three passes per year to upgrade a paid stay to the club level.  I couldn’t use those passes because I was staying on points.

One day I did pay something like $50 for the breakfast buffet.  The buffet is extensive and beautifully arranged.  In terms of the variety of dishes, this buffet didn’t impress me as being significantly better than a buffet at a Sheraton or Westin hotel in Asia.  The food quality was definitely first rate.  Anyone planning to enjoy the buffet for more than one morning should arrange a breakfast supplement in advance.  The cost is 3,000 JPY per day (about $30). 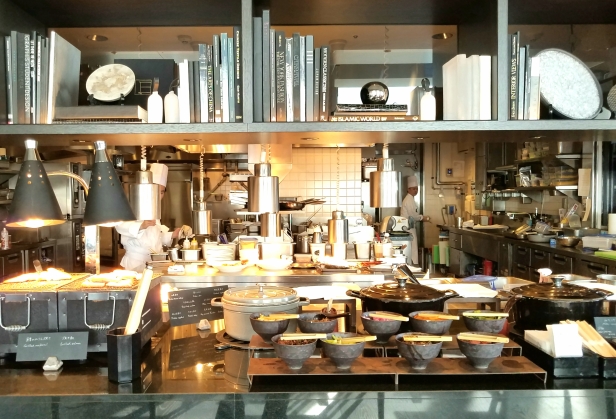 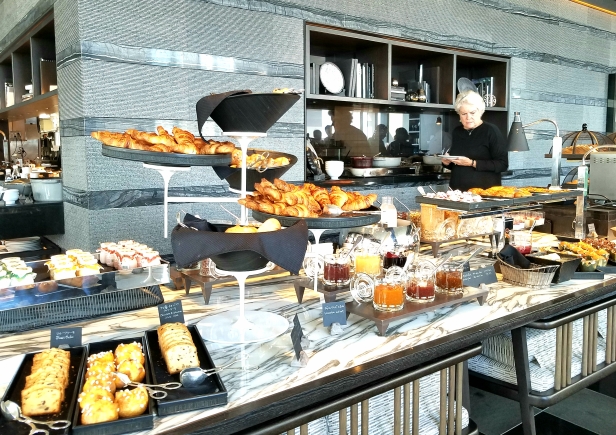 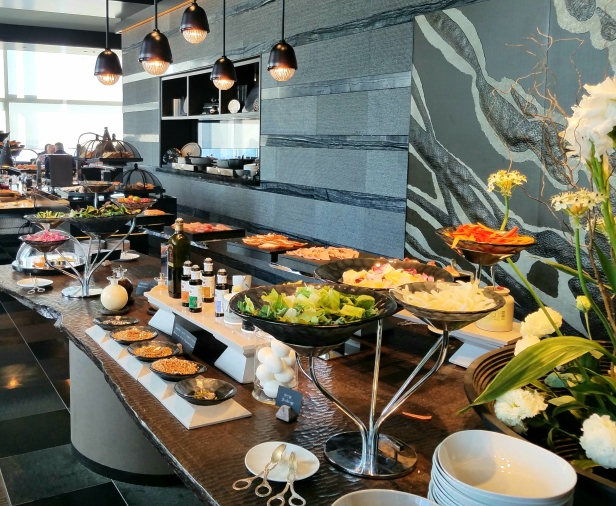 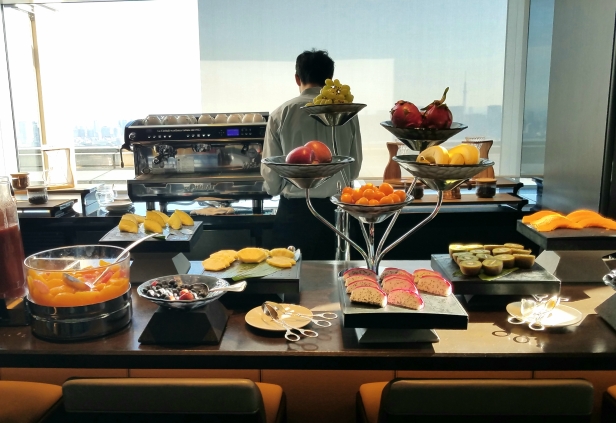 The spa offers soothing Japanese themed treatments in plush surroundings.  Together with the fitness center, it occupies the entire 46th floor.  Fitness center facilities include cardio and strength training equipment, a pool and soaking tub, and lockers.  Guests and Bonvoy elites are permitted to use the fitness center free of charge.  Spa locker rooms, sauna, steam room, heated bath and relaxation suite are available only to Spa clients.  Anyone else must pay about $30/day to use those facilities without a spa appointment. 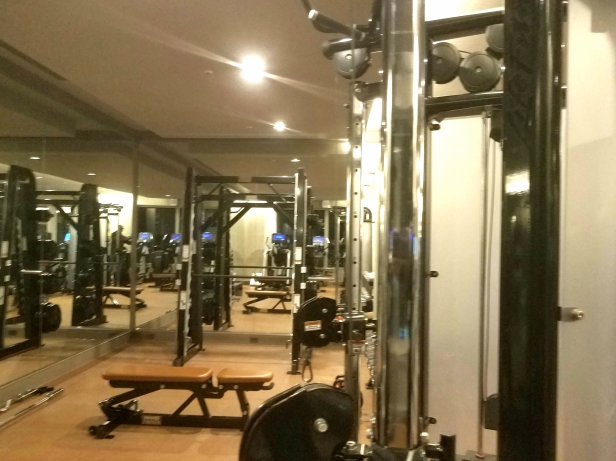 Not having access to the sauna and steam rooms is another minor Ritz Carlton slap in the face. I get the reasoning, but hotels like the Sheraton Grand Dongcheng in Beijing have equal or better facilities that are open to Bonvoy elites.

While technically in Akasaka, Midtown Tower practically sits on top of Roppongi Station.  You can board the Toei Oedo and Hibiya Lines there.  The station is easily accessed through a rear exit on the first floor above the ground level main entrance.

There is a nice park across the street from the main entrance.  It was very popular during my stay in sakura season.

It is a short walk to bustling Roppongi Crossing.  Many restaurants, bars and clubs are located on the main thouroughfares and side streets.  Concierges at the Ritz are glad to assist with finding restaurants, making reservations, and providing directions.

The Ritz Carlton Tokyo is a great hotel.  There is no doubt about it.  Given the cost in points or dollars, it ought to be.  I’m glad I stayed here.  Rooms are large rooms and well appointed.  Staff members are extremely professional and courteous.  Having a courier deliver to my airport hotel the shirt I left behind was outstanding service.  On the other hand, not having access to the club lounge and or free breakfast at the hotel chain where I’ve earned top status after decades of loyalty made me feel a bit underappreciated.

This was my first stay at a Ritz Carlton and hopefully not the last.  I’d like to try a club lounge somewhere if I can find a good one with a good rate for a standard room (I’d do a one-time splurge for a couple of hundred dollars per night) and I could use an upgrade certificate to access the club lounge.  What is your idea of an over-the-top aspirational hotel splurge?