Delta Airlines is the first U.S. based airline and only the fifth airline worldwide to operate the A220.  Originally designated as the CSeries, Bombardier designed, developed, and builds the A220-100 in Canada.   Through a deal that closed in July 2018, Airbus acquired a 50.01% interest in the program and changed the name from the CSeries to the A220. This post relates my observations and impressions from flying on the A220 for the first time.

I bought a ticket in economy class for a flight on this aircraft on January 31, 2019, the day that had been scheduled to be the airplane’s first day of commercial service with Delta.  As fate would have it, Delta delayed the first commercial flight for several days.  The new first flight conflicted with previously arranged travel.  For messing up my carefully laid plans, Delta was at least kind enough to give me credit for ticket price.

Finally A Flight On The A220

I used 27,500 SkyMiles to book the flight in coach from New York to Dallas on May 4 returning May 5.  As I’d hoped, the outbound flight was upgraded to first class.  Diamond Medallions flying on SkyMiles tickets are eligible for complimentary upgrades.

A220s are single-aisle, narrow-body aircraft.  Composites make up 20% of the aircraft’s weight.  These are the specifications from the onboard entertainment system. 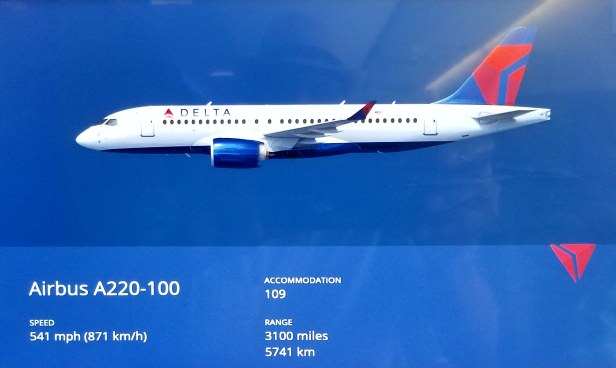 Delta puts 12 seats in first class arranged 2-2.  My Seat, 1C, is an aisle seat on the starboard side in the bulkhead row.  First-class seats are 21 inches wide and have up to 36 inches of pitch.

If you have a choice, taller people like myself should avoid the first row in first class on this airplane because legroom is extremely limited. 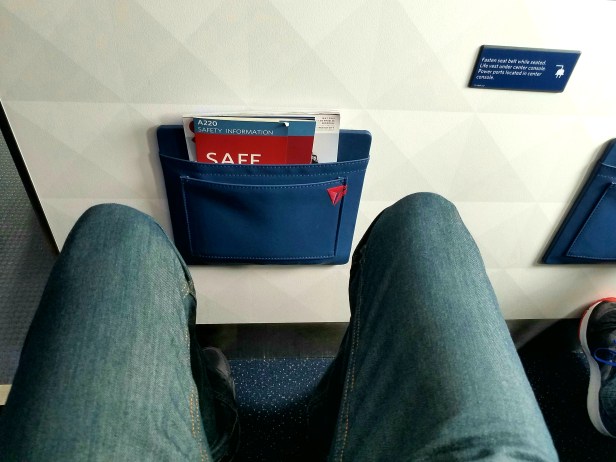 Being on an award ticket, I was probably the last Diamond Medallion to be upgraded.  I had a choice of 1C or 1D, the window seat.  For me, 1C was the better choice because from time to time I could stretch my legs into the aisle past the bulkhead.

The seat itself is very comfortable except for the lack of legroom in the bulkhead row.  The headrest tilts forward and back, moves up and down, and the sides fold to cradle the head.

The seat incorporates  a small open storage compartment into the armrest between the seats.  It is a handy spot for items like cell phones and glasses cases in flight.  This compartment contains the a/c outlet.  Don’t expect these compartments to be cleaned between flights though. 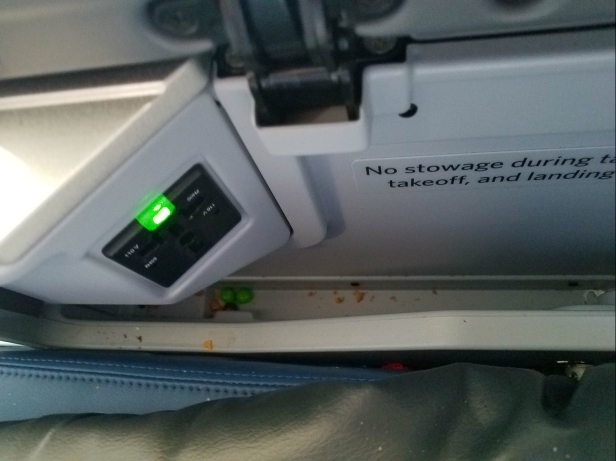 The A220 follows Delta’s pattern of being stingy with the size of the place on the center armrest where you can place drinks and snacks.  These seats have a secure place to put the bottled water that Delta always provides in first class before boarding.  often 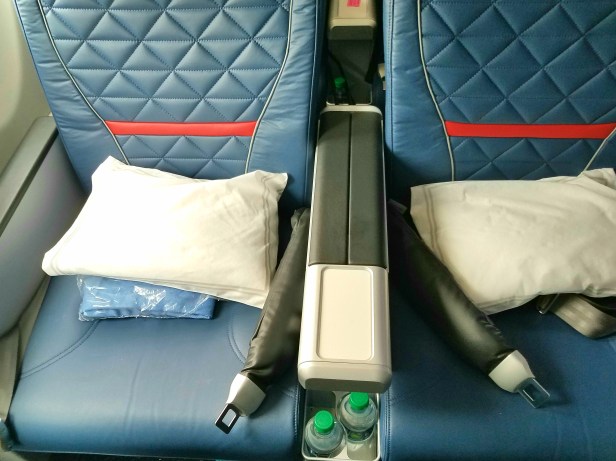 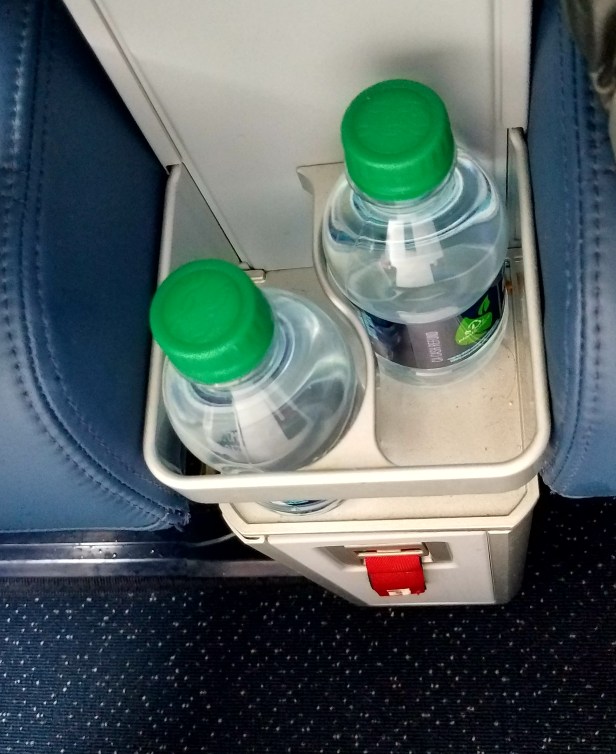 The outside armrests hold the tray table which deploys easily.  The tray table is fairly small.  It does not rest on the center armrest but depends on the strength of a hinge for support. 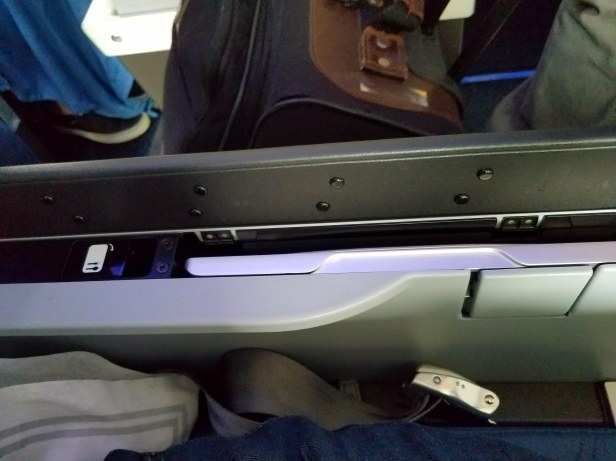 These armrests can be lowered to increase seat width.  The latch is near the floor and can be hard to locate. 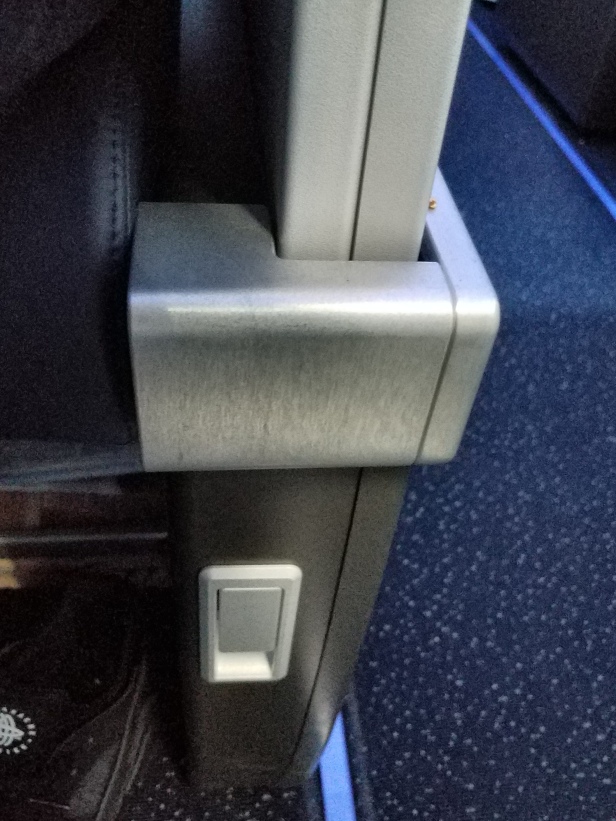 In first class, sitting in a non-bulkhead row is preferable for this aircraft.  There is more legroom although space under the seat is restricted.  A/c outlets are easy to find.  If the aisle passenger is using a charger, it must be unplugged to permit aisle access for the passenger at the window. 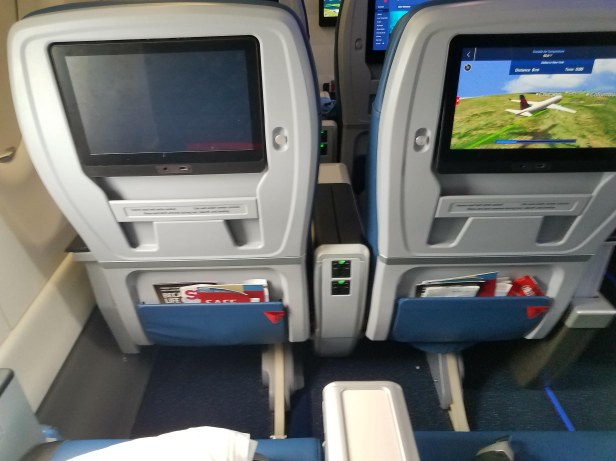 For bulkhead seats, the 11-inch video monitor with usb port is placed on the bulkhead.  It is fixed in position.  The inability to adjust it is another drawback for the bulkhead row. 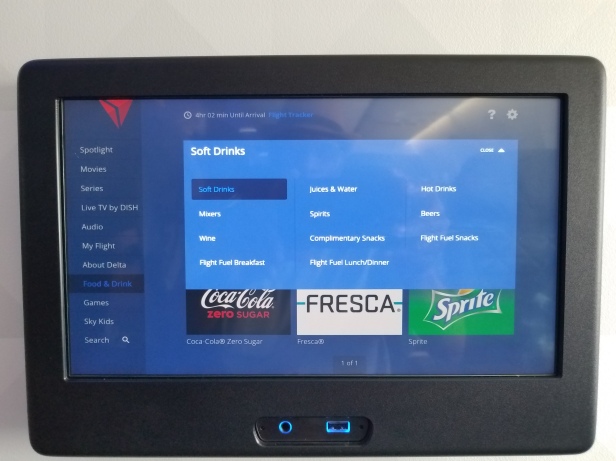 Amenities on this flight were the standard ones for Delta domestic first class – bottled water, pillow and blanket and WiFi.  Windows look to be larger than on regional jets but about the same size as current mainline planes.

As far as first class is concerned, there are only two things about the A220 that are improvements over other aircraft in Delta’s fleet and both relate to storage.  The major improvement is the addition of an open storage compartment under the center armrest.  The other improvement is creating a secure place for water bottles (adding cup holders basically). The first-class seat could be considered a downgrade because it is only a premium economy seat on a widebody aircraft.  These first-clas seats also eliminate much of the under – seat space for carry ons.  Only the window seat can accommodate putting a backpack under the seat in front.

The flight was scheduled for just over four hours.  The distance between LGA and DFW is 1,389 miles.  At boarding I was disappointed to find that this aircraft did not have a “new plane” smell as on a LOT Polish Airlines Embraer 190-200 I flew on in January.

Flight attendants provided pre-departure beverage service while other passengers boarded.  I contrast, on American Airlines, my primary domestic airline, I’ve noticed that flight attendants often wait until boarding is complete before providing pre-departure service.  If I get an alcoholic beverage and am sitting in the last row or two of first class, that usually means having to gulp it down or only taking a sip or two before it is time to taxi. 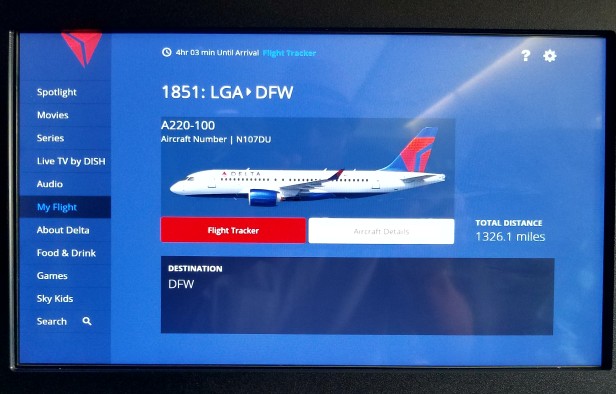 Service during the flight was dinner and snacks.  I pre-ordered grilled fish.  It was delivered with a tossed salad and chocolate cake.  This meal is comparable to dinner in first class on larger Delta regional jets.  I had no complaints about the service, taste, or presentation. 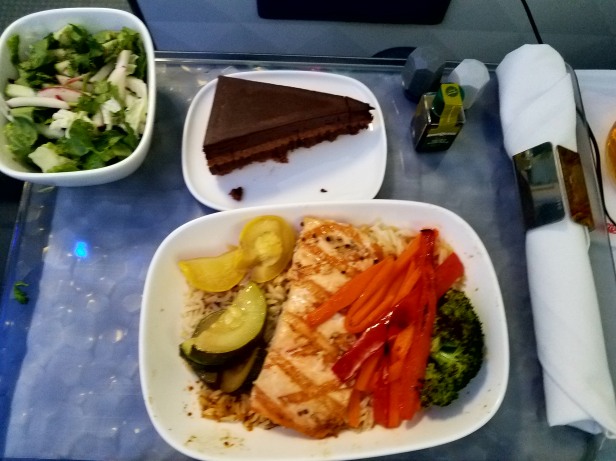 Flight attendants offered a snack service before our arrival in Dallas.  Because of a catering mistake, there were no chips in the snack basket but a flight attendant brought some from the cart in economy class to go with a Woodford Reserve. 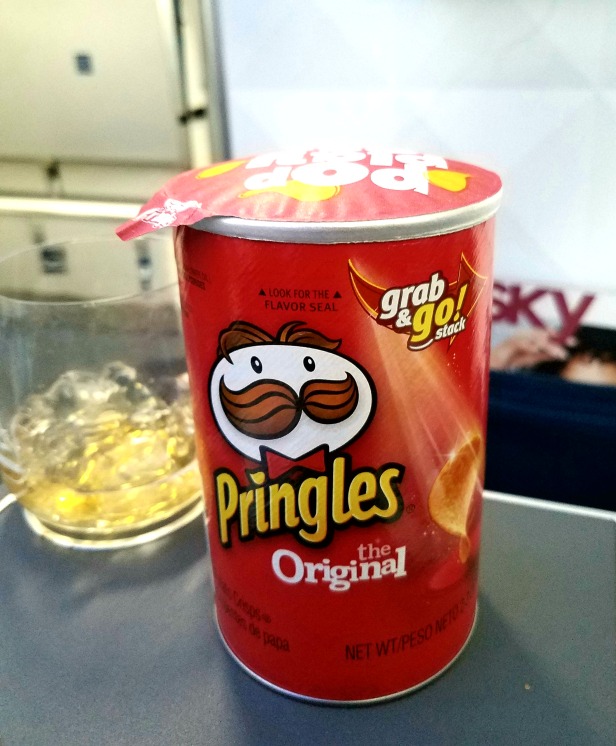 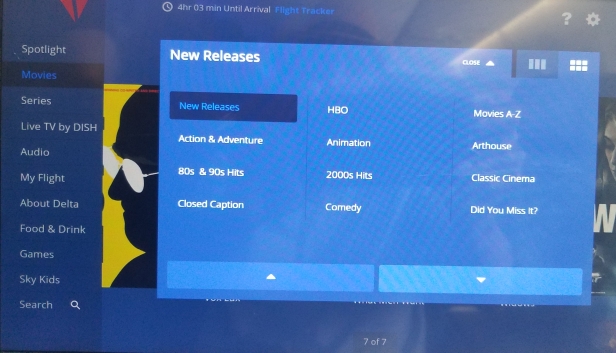 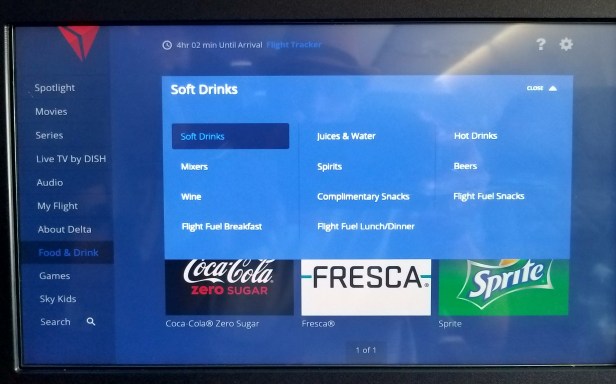 Select My Flight to enhance your “situational awareness.” 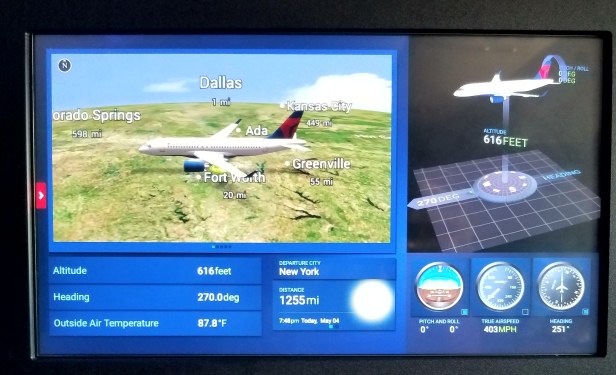 I spent most of the flight watching a movie and relaxing or trying to.  The row 1 bulkhead being the problem. 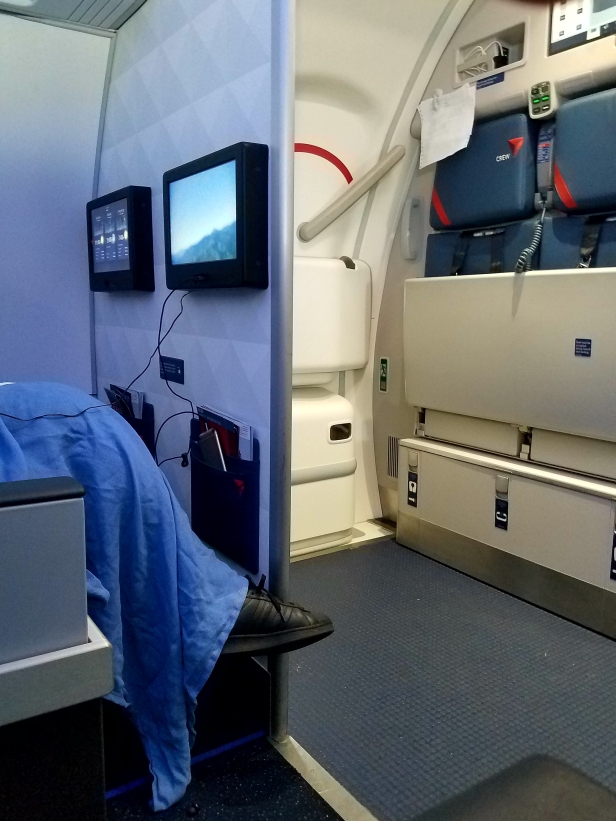 This is the first-class lavatory.  Delta includes hand lotion in the first class bathroom.  That is a plus for people of color. 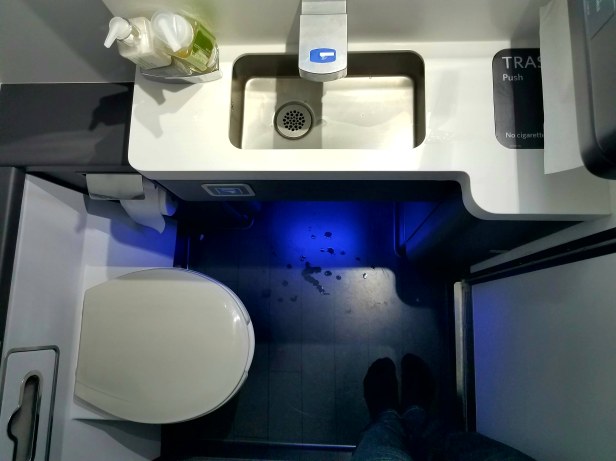 Delta chose wisely in adding the A220 to its fleet.  New airplanes are always fun even if there was no “new plane” smell.  In first class, your satisfaction will depend on the location of your seat.  Bulkhead seats on this plane do not provide enough legroom for most taller than average people to be comfortable.  In terms of passenger comfort, the A220’s biggest advantage over the competition is in economy class.  That will be the next post.