Japan Airlines (JAL) is a great choice for international travel.  I’ve been very impressed with JAL first class, business class, and economy on international trips.  Those experiences and the fact that JAL is a Oneworld partner of American, my primary airline, were the reasons for selecting JAL for the trip to Naha, Okinawa to visit my nephew and see some of the sites of fighting during the battle of Okinawa in WWII.  Even though many bloggers generate views and clicks by singing the praises of the airline or hotel they are reviewing, based on the flights between Tokyo and Naha, I found that JAL domestic flights are quite ordinary in many respects.

Other posts about a terrific trip to Japan in 2019:

After a short stay in JAL’s Diamond Premier first-class lounge I headed to Gate 25.  Boarding began shortly after the announced boarding time of 10:15.  The process was more orderly than the one for the flight from Tokyo (HND). 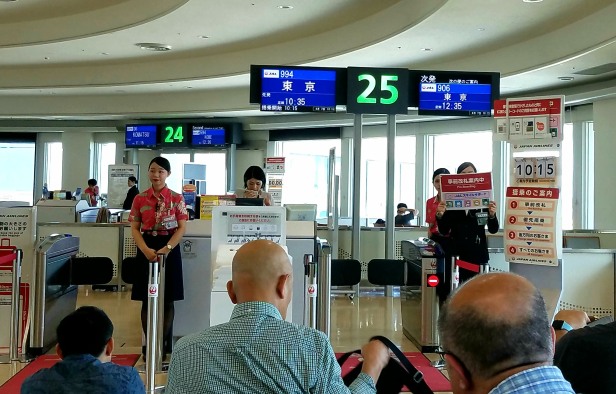 Having Oneworld Emerald status meant I was among the first to board.

I took a couple of shots of the cabin on the way to my seat in the back of the plane.

Business class is arranged 2-2-2.  The seats are recliners similar to those airlines often fly internationally on a narrow-body aircraft.  These seats have video screens that are stored in the consoles between  seats.

There are two economy cabins.  Economy seats have the standard 767 2-3-2  arrangement.  My assigned seat was 53H, an aisle seat in the twin seats on the starboard side in the aft economy cabin.

Even though this was a domestic flight, I must have been on an old JAL 767-300 configured for international service because those are the only JAL 767-300s with Row 53.  According to SeatGuru, JAL international 767-300 economy seats have 34 inches of pitch and are a generous 18.5 inches wide. 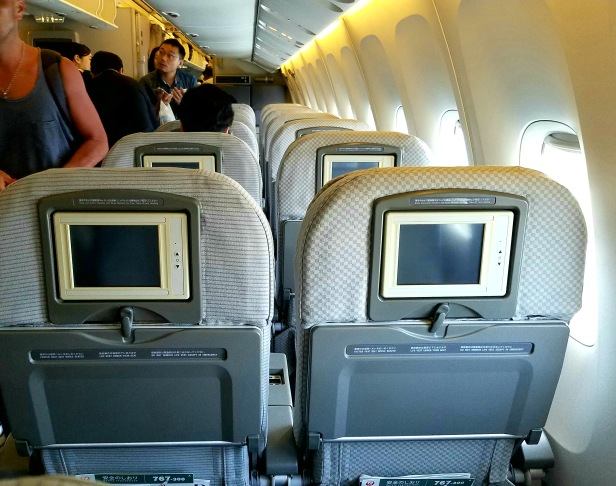 At the lounge, I’d asked about moving to a seat farther up in coach but was told none were open.  It turned out that the adjoining seat was vacant so I moved over to seat 53K.

One of the really nice things about JAL and Cathay Pacific is those airlines seem to go out of their way to keep an open seat next to passengers with Oneworld Emerald status.  This has happened to me several times with these carriers.  I don’t think it is coincidence.  Seat 53K was the only vacant seat I could see in the aft economy cabin.  On Cathay Pacific, I’ve even been upgraded to premium economy or business class several times.

We left the gate four minutes after the scheduled time of 10:35.  Taxiways were uncrowded, yet the captain didn’t begin the takeoff run until 10:49.

Takeoff was to the north on Runway 36 in the general direction of Tokyo.  Departure  took the flight over the East China Sea.

On this day, the weather was great for flying, as you would assume from the photos.  Climb to cruise was smooth.  Flight attendants began what they said was “duty free” sales before the pilots leveled off.  Having “duty free” sales on a domestic flight seemed odd.

I passed on the shopping.  Instead I admired the views and concentrated on the experience in economy class.

The previously noted seat width and pitch made the seat very comfortable.  Plus, having a vacant seat next door vastly improves the comfort of any seat.

These seats are manufactured by Recaro.  They have a seat-back video screen and a hammock-style headrest that adjusts to fit passengers of various heights.  Unfortunately, the video screen didn’t work.  There was no power and no WiFi.

JAL supplied headphones at every economy seat.  Apparently, that was just to enjoy the one channel of audio.  Although the seats on this 767-300 were configured like it was used for international service, I suspect this plane is only used domestically and maybe just for flights to Okinawa.

The only service in economy was non-alcoholic beverages.  I was offered apple juice, iced tea, and one other option.

The flight was uneventful.  Those on the port side had views of Mt. Fuji.  I’d seen it up close on a tour from Tokyo and on the the flight from HND.  Generally, flights from or two destinations south of the main Japanese islands travel just of the east coast of Honshu.  So if you are interested in seeing Mt. Fuji or other sights, plan accordingly.

Based on the flights to and from Okinawa, JAL offers very nice economy seats on its 777 and 767 aircraft but little else.  Having video screens on the 767 but no video service was a travesty.  Surely it would have been easy to at least provide flight following.  Because of its Oneworld affiliation and the personal benefits that bestows, I’ll likely choose JAL again for domestic travel in Japan even if there are slightly cheaper options.  Depending on how you value seat comfort, you may decide that the cheapest flight is best.