One of the blogs I enjoy notes that the word robot was introduced into the English language 99 years ago this month.   You can read the informative post by Terry Madeley  here.

Origin of the Robot

On January 25, 1921, Karel Capek, a Czech intellectual, debuted his play Rossum’s Universal Robots.   It was the first time the word ‘robot’ had been used.  As I understand it, the robots of R.U.R were somewhat different than the ones we think of today.  R.U.R robots were created in a chemical, biological fashion more akin to Frankenstein than the mechanical creations we think of today.

They served the same purposes though.  They were designed to serve man.  And like  robots in some contemporary science fiction stories, the R.U.R robots reject their role. 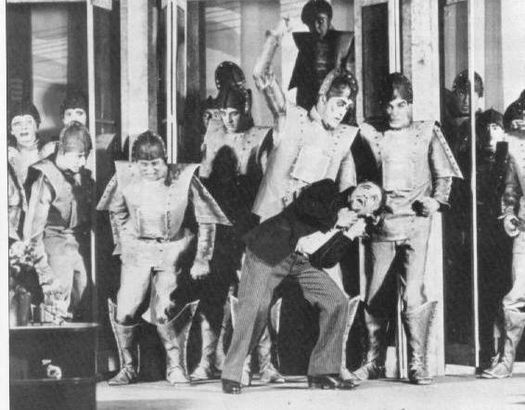 Thus, “R.U.R.,” which gave birth to the robot, was a critique of mechanization and the ways it can dehumanize people. The word itself derives from the Czech word “robota,” or forced labor, as done by serfs. Its Slavic linguistic root, “rab,” means “slave.” The original word for robots more accurately defines androids, then, in that they were neither metallic nor mechanical.

Capek was alarmed by the carnage inflicted by mechanical and chemical weapons of WWI and had a profound distrust of science and technology.  In one interview he stated:  “The product of the human brain has escaped the control of human hands.  This is the comedy of science.”

We can thank R.U.R for laying the groundwork for the wide range of entertaining and sometimes frightening robot science fiction that followed.  Calvin from the 2004 movie I Robot, Robbie from Forbidden Planet (amazing sci-fi for 1956), and the robot from the original TV series Lost in Space are some of my favorite robot characters that trace there heritage to Karel Capek and R.U.R..

Sharing an experience this summer at Robot Restaurant in Tokyo, Japan is my small way of honoring Capek and his creations.

Robot Restaurant is a testament to the power of advertising.  No one can spend much time in Tokyo without coming across multiple references.  After a few days there this summer, the subliminal and supraliminal messaging compelled me to go.

Robot Restaurant is located in Shinjuku Kabuki Cho, an adult entertainment area across from Shinjuku Station, the worlds busiest railway station.  Nearly 4 million people use the station every day. 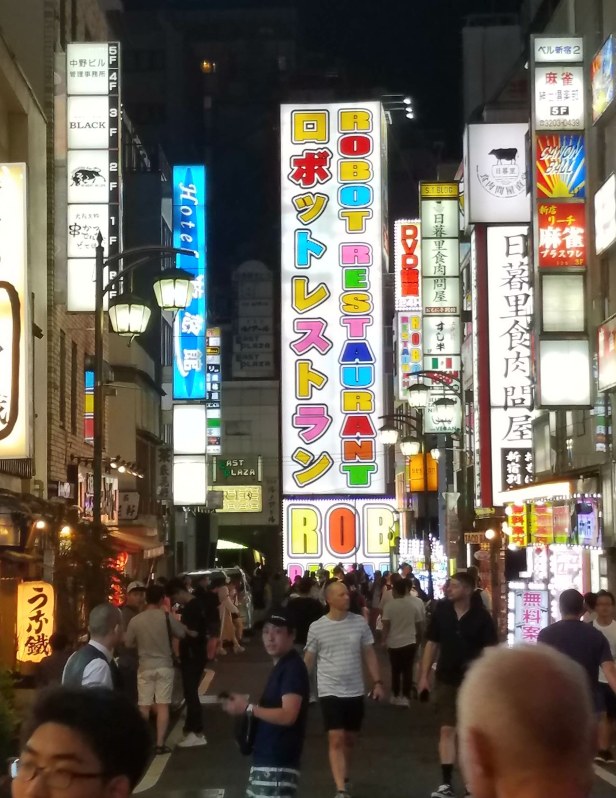 Robot Restaurant is not a place to go for dinner.  It offers only light snacks and beverages.  Food and drinks are not included in the online admission price of 7500 yen (about $70).  There are ways to reduce the price by combining it with dinner at another restaurant, which I’d recommend.  This site offers some options.

The attraction is the cabaret show which consists of dancers, drummers, battling anime characters, samurai, laser light shows, singers, heart-pounding music, and of course, a few robots thrown in for good measure.  There is some narration with the show, but it was hard to keep up with all the action.

For those who imbibe, I suggest having a drink or two before going.  Then sit back and enjoy a spectacular, far out, weird, wacky, sensory overload, and yes, entertaining experience.

Here are some of my photos that provide a glimpse of what to expect. 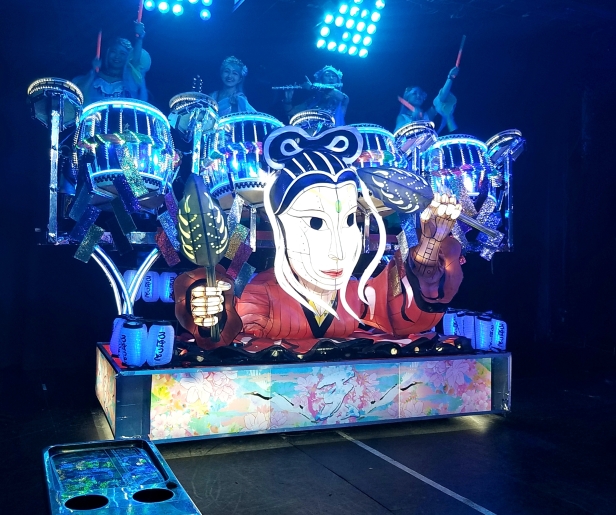 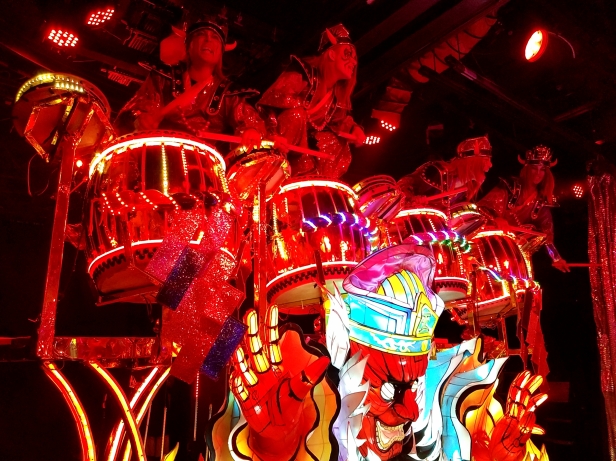 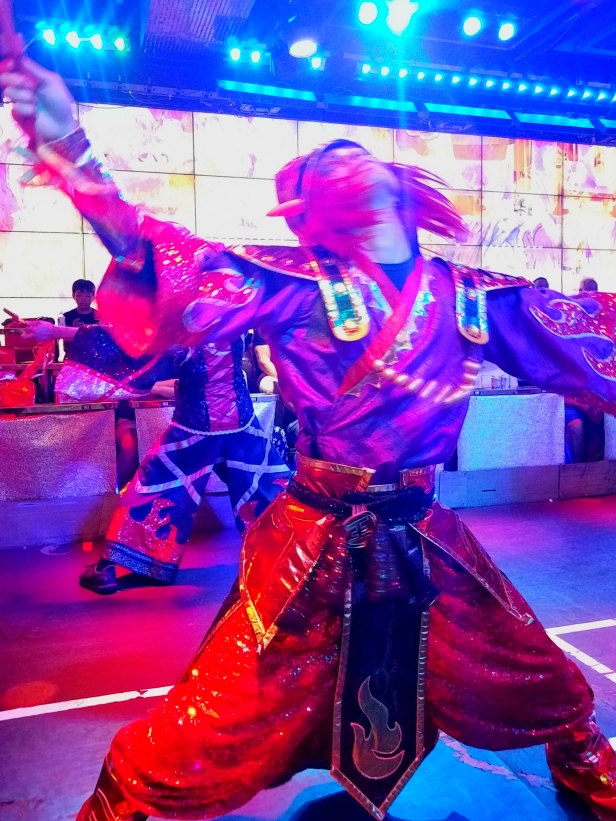 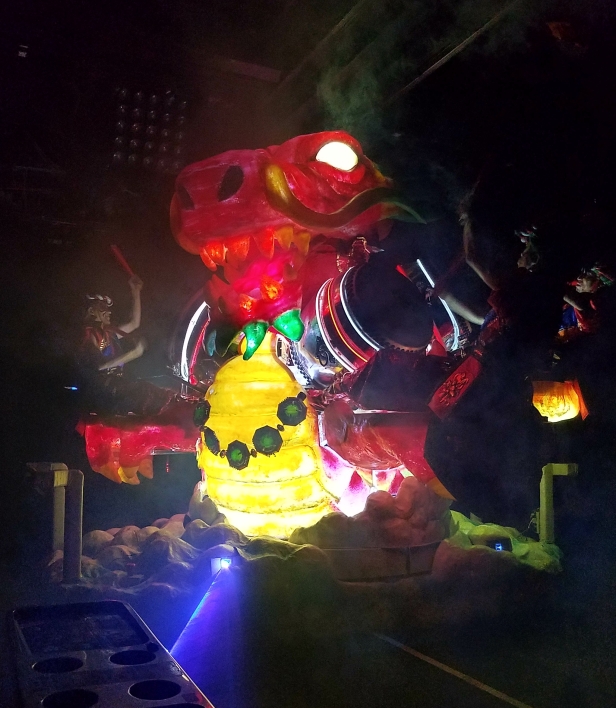 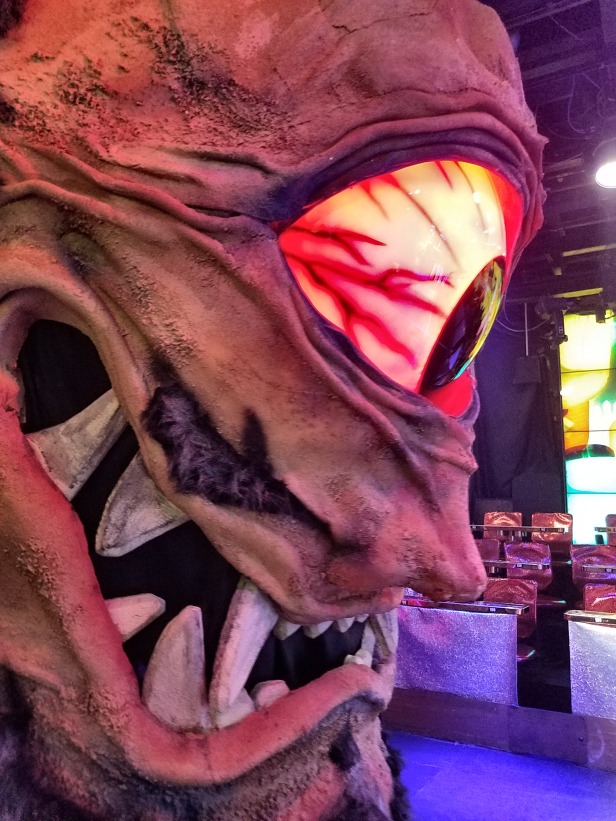 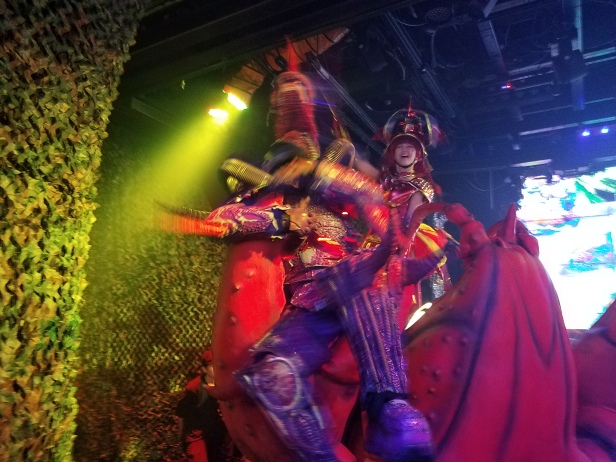 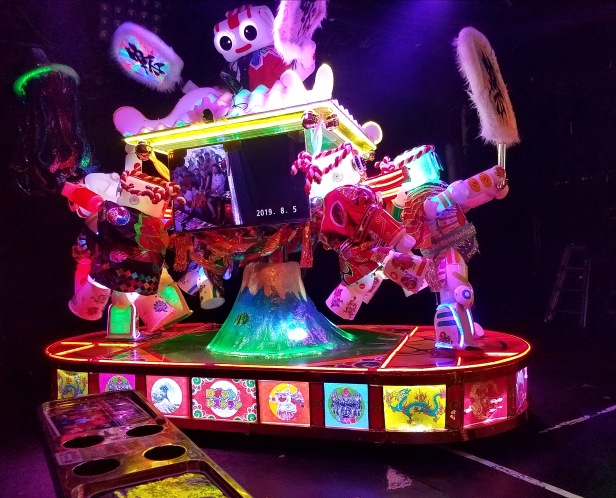 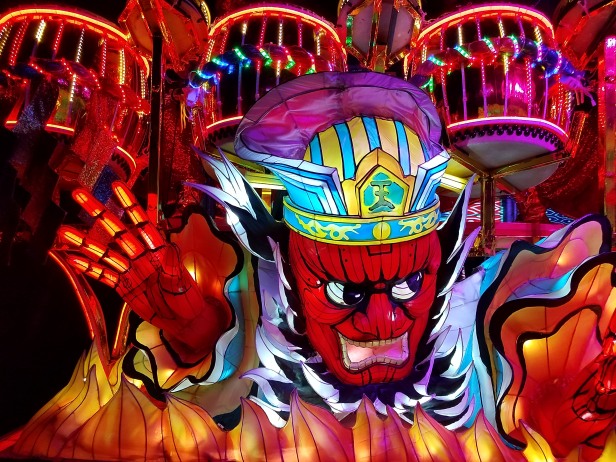 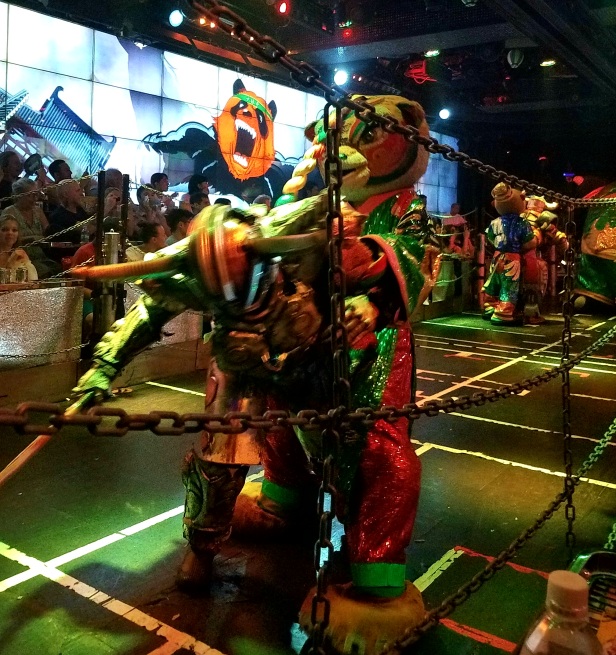 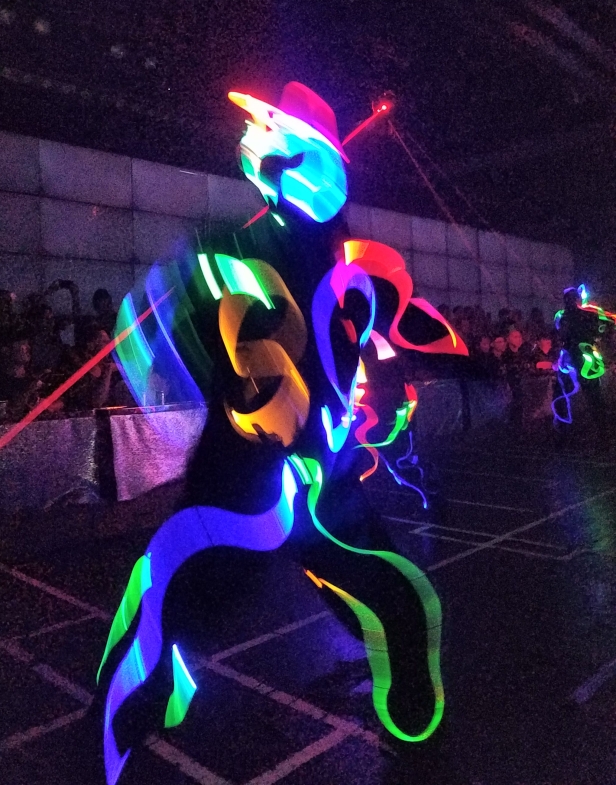 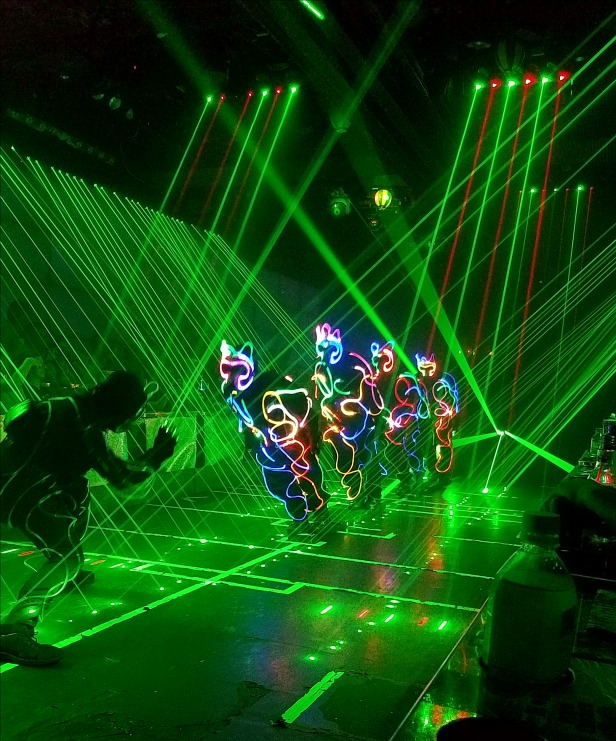 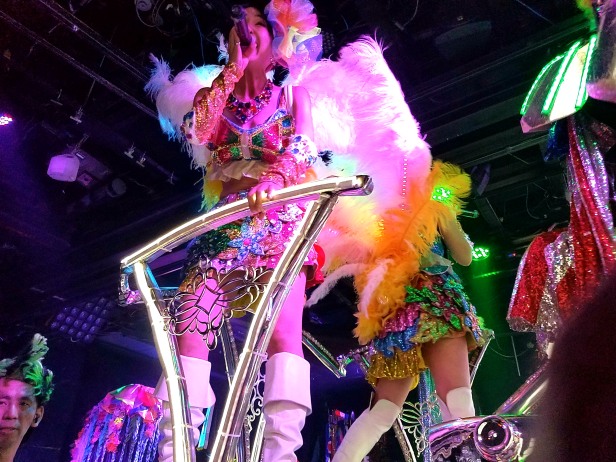 Some of the costumes reminded me of various funk bands back in the day.  It would have been fun to see the performers get down with a little funk and some robot dance moves.

After enjoying the show, take in the sights of Kabuki Cho and the bars in the Golden Gai or a nearby izakaya.

Karel Capek was a true visionary.  However I wonder if he had any idea that the robots of R.U.R could inspire the creations of modern science fiction and entertainment like Robot Restaurant.  I think it is worth a visit for those looking for a little fun and fantasy.  If you haven’t been already, check it out when you are in Tokyo.

Do you have favorite robot characters?

8 thoughts on “It Is The Lunar Year Of The Rat But January 25 Is The Day Of The Robot – Robot Restaurant Review, Tokyo Japan”