As a Delta Air Lines frequent flyer for many years until 2015, I’d flown just about every Skyteam airline except Garuda Indonesia, the highest rated airline in Skyteam.  This summer I used 90,000 SkyMiles per ticket from my Delta account for two round-trip business class tickets from Bangkok Suvarnabhumi (BKK) to Tokyo, Japan (HND).

That is a lot of miles for intra-Asia travel.  American Airlines, which is now my primary airline, charges 80,000 per round-trip ticket for flights from BKK to the best Tokyo airport, Haneda, and the flights on Cathay Pacific (another 5-star airline) include first class on a 777-300 between Hong Kong and Tokyo!  Unfortunately, those flights were not available on or around the dates we needed to travel.  Even though these “free” flights were expensive in terms of frequent flyer miles, I still looked forward to the Garuda Indonesia flights for the reasons stated.

I wasn’t expecting much on the flight from Bangkok to Jakarta.  It was on a 737-800.  It is hard to have an outstanding business-class product on a narrow-body aircraft. Galley’s are smaller and seats are almost always recliners as instead of lie flat.  I was looking forward more to the flight from Jakarta to Tokyo.  It would be on a widebody A330-300 with Garuda’s best lie-flat, business-class seat.

The flight boarded from Gate F4.  It was a short walk from the remodeled Skyteam lounge on Concourse F.  It is available to Skyteam first or business class passengers and Elite Plus frequent flyers and Priority Pass members.  This lounge has very good  food, beverages and seating.  It is well above average for a Priority Pass lounge.

The distance between origin and destination is 1,420 statute miles.  At boarding the captain estimated our flight time from takeoff to touchdown at three hours and five minutes. 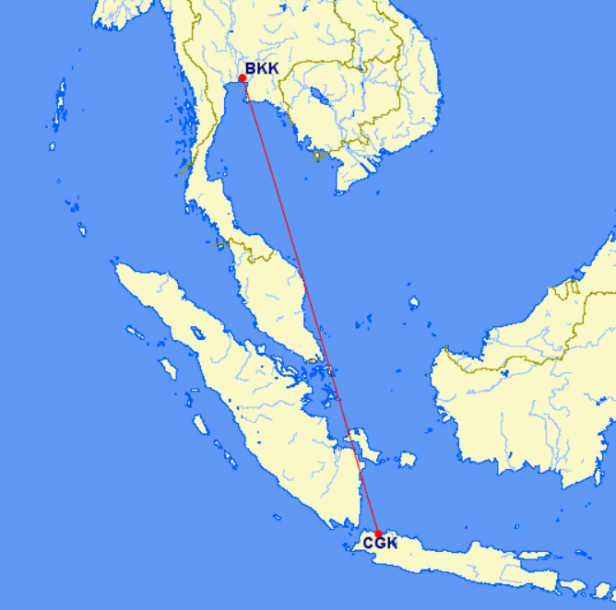 The 12 seats are 19 inches wide and the distance between seats (seat pitch) is a generous 42 inches.  Seats have leg and foot rests.  Similar seats in first class on 737s flown by United, Delta and American have 38 inches of pitch at most.

Well-padded articulating headrests and leg and footrests make these seats very comfortable.  If underseat storage is important, avoid a window seat because a box for the video system takes up most of the space under the seat in front.

Each seat has a video monitor that folds upward from the armrest between the seats.  There is a decent sized area between the seats for placing beverages.  Video remote and the control for seat position are next to your thighs.

Boarding began at 16:50.  Flight attendants gave a warm welcome at the door and showed us our seats.  Then they offered moist towels and water or apple or orange juice.   I’d hoped for champagne since this was a five-star airline.

For this short international flight Garuda Indonesia provided a nice blanket and pillow, slippers, and headphones.  There was no amenity kit.

Flight GA 869 departed Suvarnabhumi Airport’s Runway 01R (Zero One Right) at 17:28.  Service began as the flight leveled at our cruise altitude.  Even though narrowbody aircraft are not ideal for great service, Garuda Indonesia distinguished itself.

Service began with drinks.  We ordered the champagne that was not available for pre-departure beverage.

After drinks, the FA placed a nice linen tablecloth on the tray table and served an  appetizer.

The attendant then offered wine.

I ordered a beef dish for the entree.  (Apologies for not keeping the menu to show the choice of food and beverages.)

The mousse capped off a delicious meal and excellent service by the flight attendant.

Compared to other international flights in business class. I’d put the food and service just below Etihad on A320s when it was rated five star Abu Dhabi, UAE to Male, Republic of Maldives and Kathmandu, Nepal to Abu Dhabi and slightly above the service on four-star China Southern and a 737-800 from Bangkok to Guangzhou, China.

After the meal, I reclined the seat, extended the leg rest and checked out the inflight entertainment system.  The movie selection lacked many first-run features but there were some older action and adventure movies that were appealing.

The flight landed at 20:34 two hours and 54 minutes after takeoff.  We parked at a remote stand.

Although it is a little trickier with baggage, taking airstairs to or from a plane seems  dignified compared to a gerbil tube.

A bus drove us to Terminal 3.  We went through security at the transit and transfer area but, thankfully, did not need to fill out immigration forms and go through a passport control station.  After security, it was up an escalator and straight to the Garuda Indonesia business class lounge.  That lounge will be reviewed next.

Even though Garuda Indonesia is a five-star airline, I wasn’t expecting a true five-star experience on a 737-800, but wound up impressed.  The seat, food, beverages and service were much better than what I experienced on narrowbody international flights on the U.S Big 3, China Eastern and China Southern.  The A330-300 flight to Tokyo would be the best opportunity to evaluate Garuda Indonesia as a five-star airline.  That review is upcoming.

Have you flown Garuda Indonesia or other five-star carriers on narrowbody aircraft?  How was your experience?