On February 24, 2020, American Express opened a Centurion Lounge at Charlotte-Douglas International Airport (CLT).  The Centurion Lounge is the best network of lounges in the United States that are potentially available to anyone.  Charlotte is the 11th location in the network.  Currently, Centurion Lounges are open at airports in Dallas (DFW), New York, (LGA), Miami (MIA), Phoenix (PHX), Philadelphia (PHL), Seattle (SEA), Houston (IAH), San Francisco (SFO), Las Vegas (LAS) and Hong Kong (HKG).  The list of continues to grow as London (LHR), New York JFK, Denver (DEN) and Los Angeles (LAX) are all in the pipeline.

None of those locations needed a Centurion Lounge as much as Charlotte.  Last year, CLT,  the second largest hub for American Airlines, was the 11th busiest airprot in the U.S. ranked by passenger traffic and the 6th busiest airport in the world ranked by aircraft movements.  Yet CLT’s only airport lounges were two over stressed American Airlines Admirals Clubs.

An inadequate number of lounges was just one symptom of CLT’s severe case of “third world airport” syndrome that plagues many large U. S. airports.  To correct those issues, in 2015, airport officials announced Destination CLT, a 10-year phased airport expansion that includes expanding and remodeling the terminal lobby, new gates, and a new runway.  A recently completed phase of that plan created space for a new lounge.

American Express cardmembers can bring a limited number of guests for free. Each Platinum cardmember is entitled to two complimentary guests. Children under 2 do not count towards this total. Lounges may request proof of age (passport, birth certificate, infant boarding pass).  Centurion cardmembers may enter with up to two guests or immediate family (spouse or domestic partner, and children under 18) at no additional charge.

Delta SkyMiles Reserve cardmembers may bring up to two guests at a per-visit rate of $50 per person. Platinum and Centurion cardmembers may purchase a day-pass for any additional guests for $50 at the time of entry.

The lounge occupies just over 13,000 sf.  That is a typical size for Centurion lounges.  A large general seating area is immediately ahead as you enter.

Special purpose rooms are located in the center with seating between them and on either side. 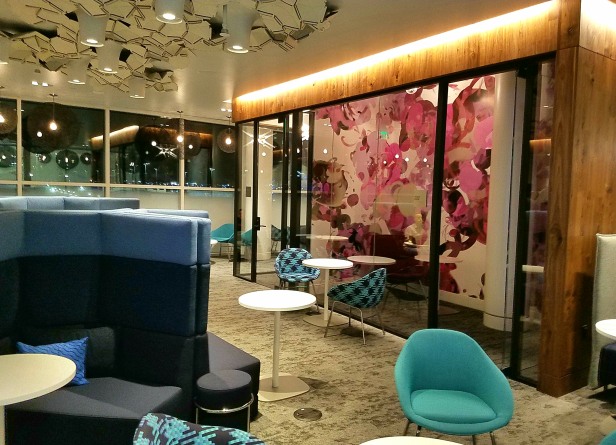 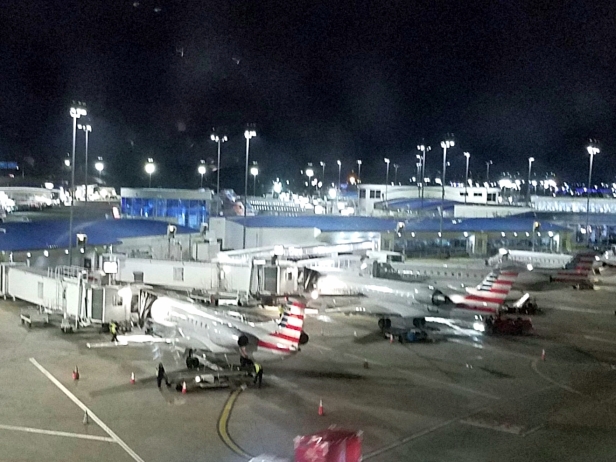 A TV area is located at the far end.  This room and the adjacent dining area benefit from views of Concourse D gates and the Charlotte skyline in the distance. 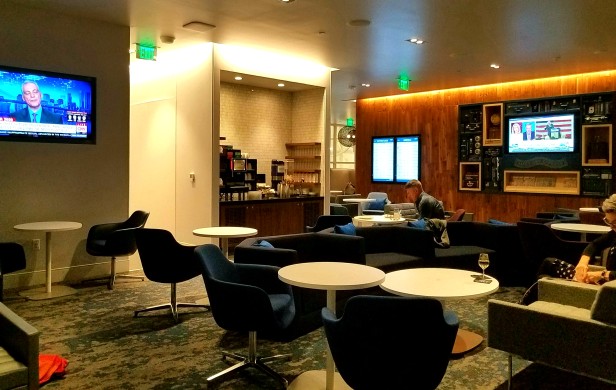 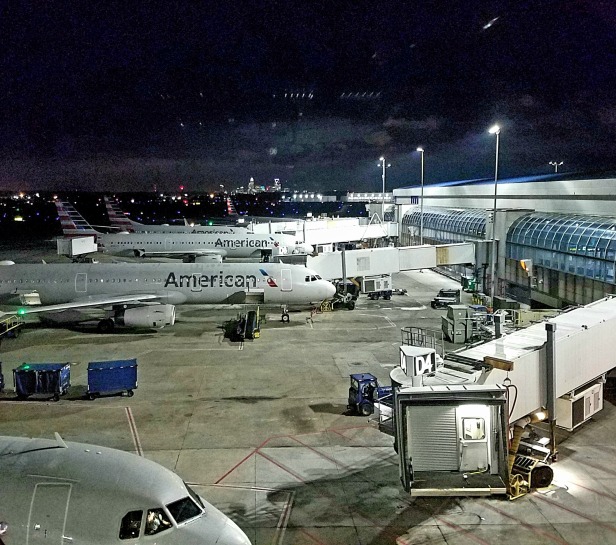 Food and beverages are the main attraction in Centurion lounges.  On entering the lounge, walk straight ahead to reach the bar, buffet and dining tables.  Unlike, Admirals Clubs, United Clubs and Delta SkyClubs, premium brands of alcoholic beverages are complimentary. 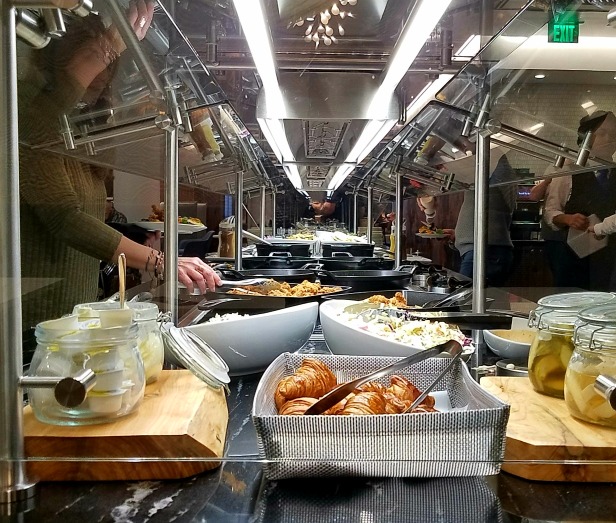 American Express believes its lounges should serve locally inspired cuisine.  In North Carolina that means southern cooking.  Southern cooking is basically “soul food,” ethnic fare eaten by African Americans for generations.  I didn’t grow up in the South but am well acquainted with soul food.  Yum!

American Express selected Joe Kindred as Executive Chef of the Centurion Lounge Charlotte.  His menu is definitely good ole down-home, soul food/southern cooking.  I’m sure that it was more than the fact I’d not eaten all day that made the food taste so good. 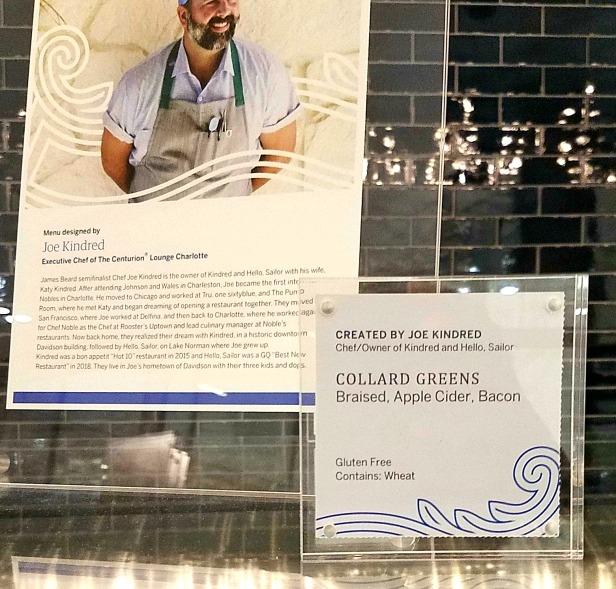 In addition to the dining area, there are stations with coffee, tea and cookies in the seating areas.

There are several special purpose rooms for phone calls, families and conferences. 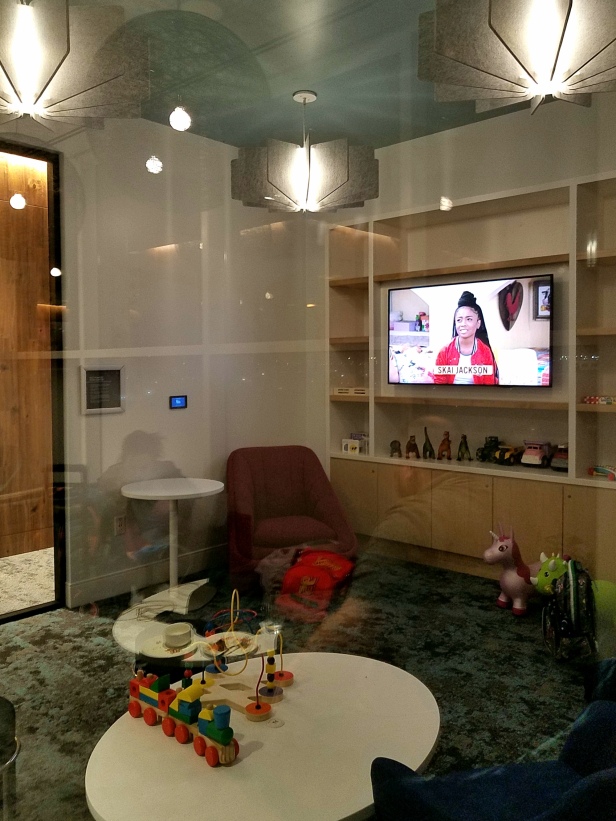 Lavatories and showers are located on the hall behind the reception desk.  The men’s bathroom looks nice and seems large enough to avoid waiting.  There are only two showers.  Given the popularity this lounge is sure to enjoy, that may not be enough.

Well it’s about damn time!  Charlotte, one of the country’s busiest airports, has never had a decent lounge.  The Charlotte Centurion lounge relegates those days to the file of  unpleasant memories.  Travelers originating in or passing through CLT now have a lounge option with food and beverages that hold their own with any non a la carte lounge in the country.  Because this is by far the best lounge in the airport, it remains to be seen how crowded it gets.

Are you looking forward to visiting this lounge?