This post is about the good old days (like three weeks ago) when I thought air travel to most of the world was still fairly safe and fun.  The reality of Covid-19 was just starting to dawn in the US.  The thinking then was novel coronavirus was just a foreign disease.  We didn’t need to worry.  The US restricted  travel from China and then halted flights entirely.  Take that coronavirus.  Covid-19 was under control.  Or so we were told.

But the Republic of Korea (South Korea) and later Japan started having serious problems.  When the State Department and CDC advised against travel to Japan, I cancelled a trip to Thailand with a stop in Japan for early Sakura (cherry blossom) Season.  Fortunately, I could book this flight to Bangkok through Hong Kong on Cathay Pacific in premium economy for roughly the same time period and I enjoyed my own Sakura Season at home.

After checking out at the LAX Marriott Hotel, a great airport hotel, I met my roommate from law school days.  We always try to get together if I have a layover at LAX.  We enjoyed dinner at an Asian fusion restaurant in nearby Manhattan Beach (remember the good old days when restaurants were open?).  I spent the remaining time before the flight in the Qantas First Lounge in the LAX Tom Bradley Terminal.  A few years ago, this lounge was clearly the best in the US.  Now United Polaris Lounges give it a run for the money.

Cathay Pacific is based in Hong Kong.  It is a Skytrax 5-star airline.  That rating has been well deserved.  Unfortunately, ongoing Hong Kong protests (go Hong Kong!) and Covid-19  are a financial existential threat to the airline.  Except for cancelling flights for reasons beyond its control (such as when protesters occupied HKG in August 2019), it has always treated me exceptionally well. I was glad to provide some support by purchasing this ticket.

The 777-300ER is the flagship of Cathay Pacific’s fleet.  It is its only long-haul airplane with first-class.  There are five different seating configurations.  The 777-300ER version for this flight was 77A.  Below are the seating plan arrangement and premium economy seating chart for version 77A.

Premium economy seats are 19.5 inches wide and have 38 inches of pitch (the distance between a point on a seat and the same point on the seat in front).  Compared to seats in first class on US domestic aircraft, these seats are about one inch narrower but have two more inches of pitch.

Of 34 premium economy seats, no more than eight or nine were occupied.

Flight attendants offered juice, water or champagne, took diner orders, and distributed antiseptic towelettes.  Amy, the In-flight Manager, came by to provide a personal welcome and pledge to meet “any” request.  That is a very nice touch and is standard procedure for Cathay Pacific for every Oneworld Emerald regardless of class of service.

The captain received clearance to leave the gate at 23:34.  We taxied to Runway Two Five Right and departed at 23:49.  I had a window seat but also followed our progress with the external belly cam.

The great-circle distance between Los Angeles and Hong Kong is 7,260 statute miles, 11,684 kilometers, or 6,309 nautical miles. Our flight time was projected as just over 15 and one-half hours.

Passengers can switch on their devices and connect to the internet after the flight passes through 10,000 feet.  Cathay 777-300s have WiFi for sale by the hour or for the flight duration.

Fifteen hours seems like a long time to spend on a plane.  However between eating, sleeping and watching movies the time passed surprisingly fast.

Because many passengers were ready to sleep, flight attendants began Supper and beverage service only 25 minutes after takeoff as the pilots leveled off at the initial cruise altitude.  Here are the menus: 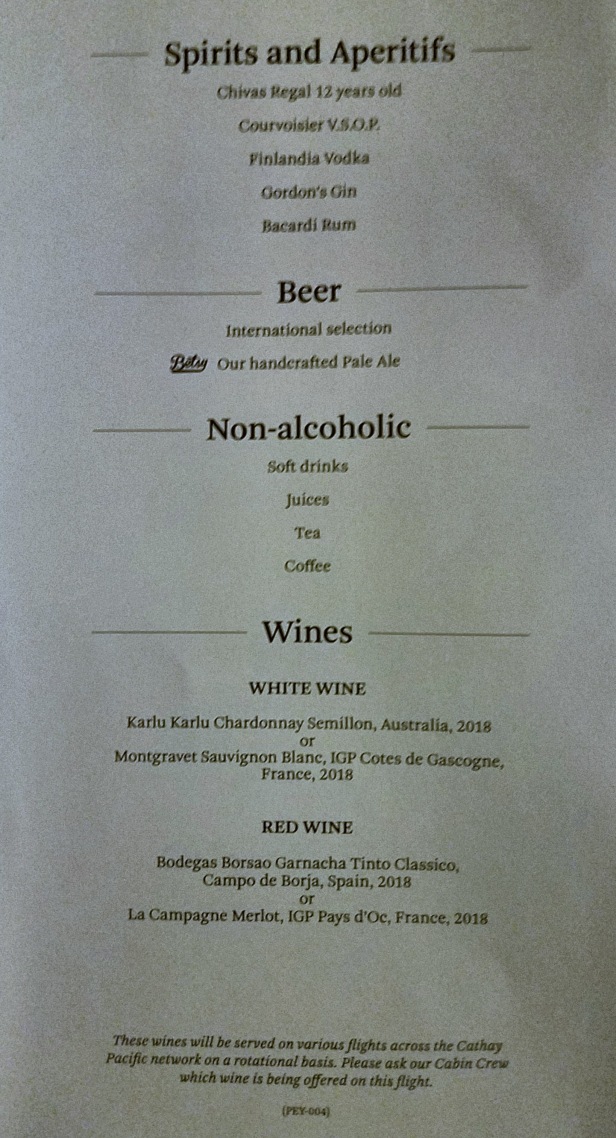 I ordered before takeoff. 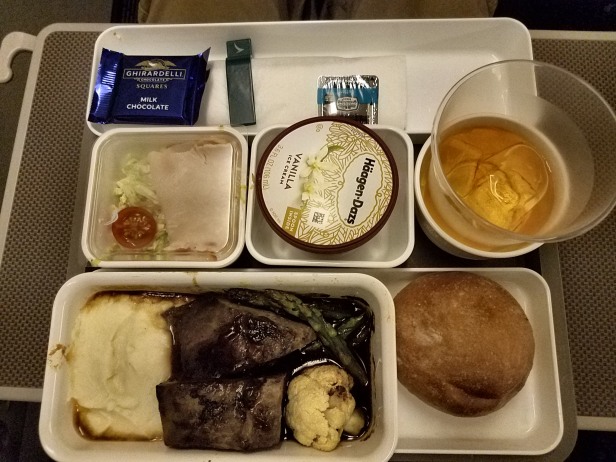 This meal also came with silverware (not plastic), a Ghirardelli chocolate, toothpick and dental floss and, the most useful part, another antiseptic towelette. 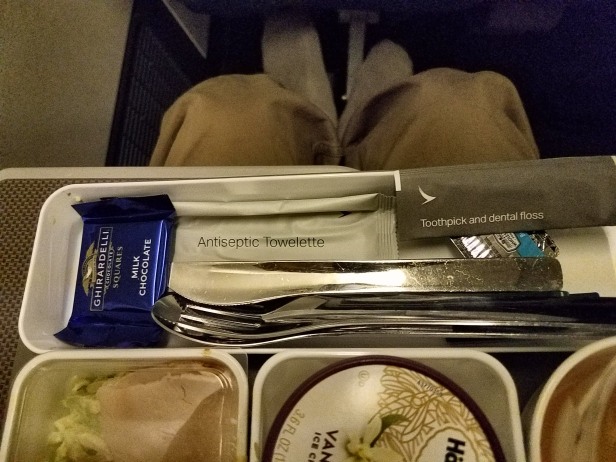 The meal was satisfying and tasty.

After supper, I moved to the exit row seat in front to sleep and watch movies.  Seats by an exit are usually colder but there is tons of legroom and the quilt was warm.

I perused the extensive list of movies and found about six new ones I wanted to watch.  I was surprised to find Parasite, recently named the Academy Awards Best Picture, was on the list.  Darn! I’d scrambled to see it at home a few days before leaving.

About six hours before landing I asked an attendant for a snack.  Pizza and a beer went well with one of three movies I watched.

The beer is Betsy Beer, a Cathay Pacific pale ale.  It had a hint of mandarin orange peel and tasted great at 35,000 feet.

I visited the premium economy lav five or six times to wash hands.  I was glad Cathay provided face moisturizer and hand lotion.  Some airlines (looking at you American) don’t even put lotion in business class lavs. 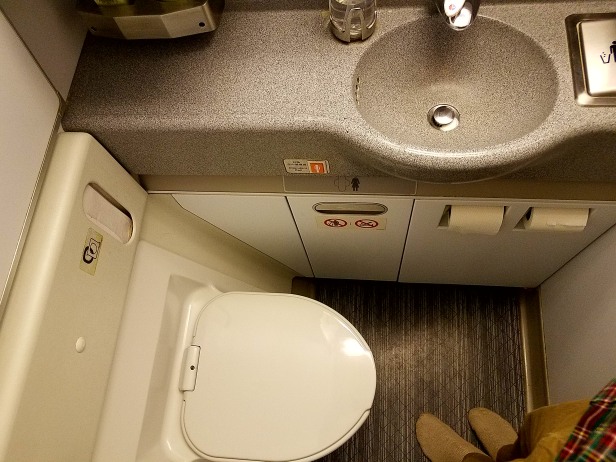 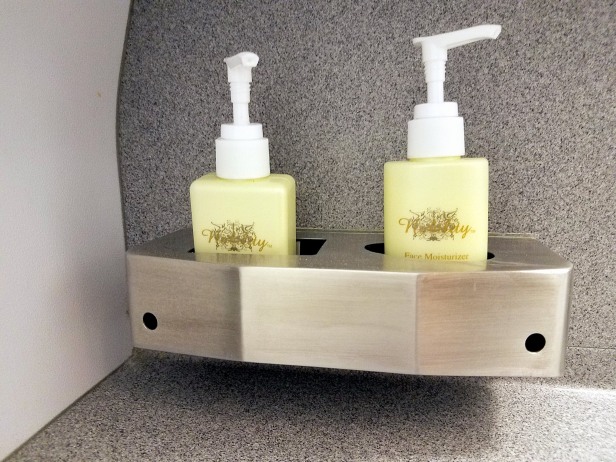 The flight landed at HKG on Runway Seven at 07:38 local and parked at Gate S35 at 07:43.  The flight had been wonderful despite coronavirus concerns.  Passengers who wanted to were separated by more than six feet and using antiseptic towelettes and frequently washing hands also helped to alleviate health concerns.

This flight was outstanding in all respects.  From a champagne pre-departure beverage to an Eggs Benedict arrival meal, beverages and food were much better than typical economy fare.  The in-flight entertainment system had external cameras and many more great new releases than I had time to watch.  Service was personal, efficient and professional.  I used the attendant call button a couple of times and someone responded within minutes.  Try that on most other airlines.  Last but not least, seats were roomy and comfortable.  They sported footrests, calfrests and eight inches of recline, which presented no problems because of the distance between rows.  Sleeping was easy with the warm quilt and large pillow.  When the load is light and price is slightly above regular coach fares, as in this instance, I would choose Cathay Pacific premium economy over business class any day.

Have you experienced a premium economy flight?  What do you think of this product?