The Delta Air Lines flight to Detroit was departing from PVG Satellite Terminal S1, a new  terminal that opened in September 2019.  It was easy to get to Terminal 1 from Terminal 2 where the China Southern flight from Bangkok arrived.  An overhead walkway connects Terminals 1 and 2.  A free shuttle bus runs between the terminals.  It takes no more than 10 – 15 minutes.  Using the walkway is best even if you have checked bags.  PVG, like many major airports outside the US, supplies luggage carts free of charge.  Alternatively, a free shuttle bus runs between T1 and T2.

I arrived at Delta’s check in at Terminal 1 but had to wait nearly an hour for the counters to open at 08:40, three hours before scheduled departure.  In the photo below agents are meeting with their team leader before opening the flight.  I’ve seen that practice in many airports in Asia.  It seems like a good idea but I was anxious to .

After getting a boarding pass, passengers take a train to Satellite 1 where they go through passport control and security.  S1 is a beautiful facility.  It looks more like an upscale multi-level mall than an airport.  I wish I hadn’t deleted the photos on my phone.  With 90 gates and just over 620,000 square feet of floor space, the satellite facility is the largest satellite terminal in the world.  Below is a rendering from Delta.com.

The lounge was hard to find.  There are signs providing directions, but the directions and escalators were confusing.  I had free access by virtue of SkyTeam Elite Plus status as a Delta Diamond Medallion.

The lounge has a rectangular shape.  You enter the lounge near the middle in the area for food service.  This area has dining tables, several buffets, self serve  beverages and a bar.

I visited in the morning.  The buffets held a typical variety hot and cold dishes to complete a western, Chinese, or Indian brunch or breakfast.  There is also a noodle bar featuring China Eastern MU Noodles. 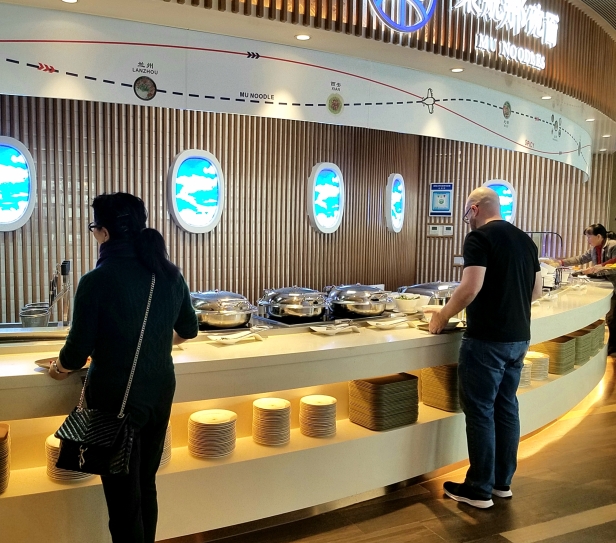 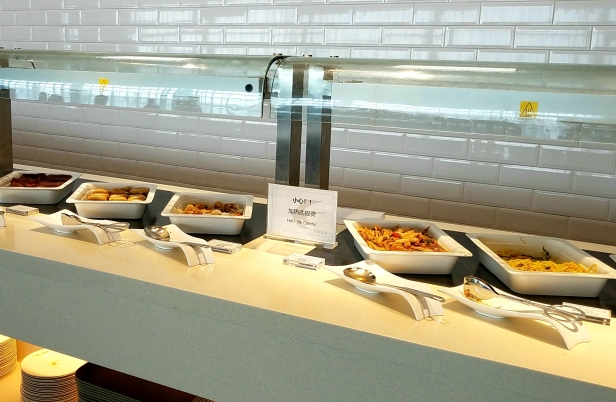 Except for one cake donut and juice I didn’t eat anything.  Others looked like they  enjoyed the food.

China Eastern always has alcoholic beverages available.  The selection is an upgrade in quantity and quality from what was offered in the T1 VIP Lounge. 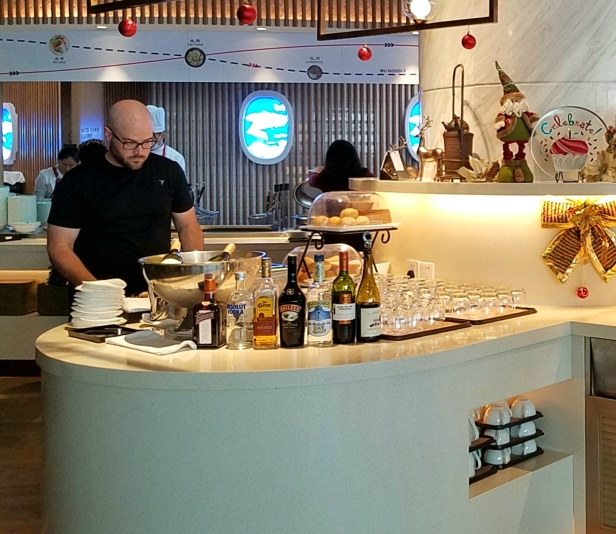 The primary seating area is to the left of the food service area.  There are rows of comfortable chairs with electrical connections suitable for US plugs and others.  A wall of floor-to-ceiling windows supplies the seating and dining areas with natural light and interesting airport views.

Work tables and alcoves are located towards the far left of the seating area.

Showers and bathrooms are to the right as you enter.  Shower rooms have, toilets, hair dryers, shaving mirrors, and bath amenities. 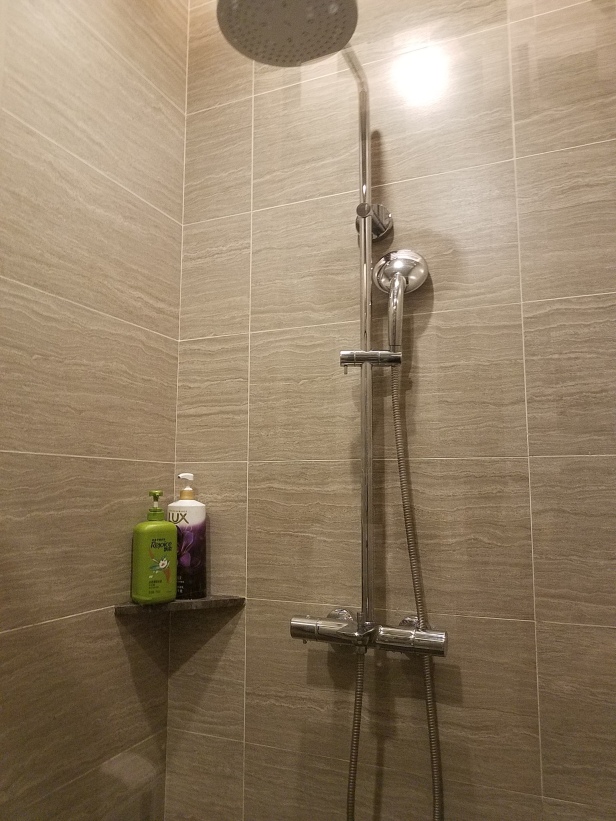 The lounge has internet monitors, free WiFi, reading materials, and flight monitors.  There are announcements for most SkyTeam flights.  Agents at the check-in desk can assist with questions on China Eastern flights and to a lesser extent flights on other SkyTeam airlines.   A play area for youngsters is located at the far left of the seating area. 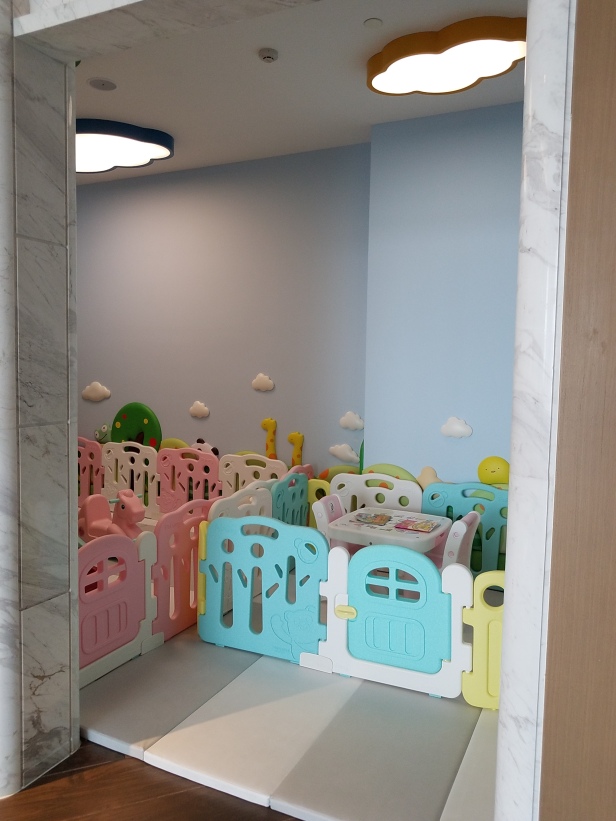 Airlines like to display their best products and services at their busiest airports.  Shanghai Pudong (PVG) is China Eastern’s main hub.  That is what China eastern has done with the S1 VIP Lounge.  This lounge is a definite improvement over other  China Eastern business class lounges.  Food and alcoholic beverages are upgraded.  Unlike the Terminal 1 VIP lounge, this one is all on one floor and benefits from  natural light and airport views.  The decor is clean, modern and stylish in keeping with the ambience of brand new Terminal S1.  That terminal rivals Korean Air’s magnificent Terminal 2 at Seoul/Incheon (ICN), which opened two years ago and earned my vote for the world’s best SkyTeam terminal.  After abandoning its hub at Tokyo Narita (NRT), Delta now has two excellent options for connecting to destinations in Asia. However at this time there is no way China Eastern can match the service and experience Korean Air provides.