This post continues the story of my first trip to Mallorca, Spain.  To be clear, I’m  isolating at home now.  This trip was months before covid-19 changed our world.  I left the US on September 30 and arrived at Palma Mallorca on October 1, 2019.  I left Palma on October 7 arrived home on October 8.

The present travel hiatus gives me a chance to catch up on many previous trips that have gone unreported.  Here are other posts so far about the Mallorca expedition:

The flight to Palma was in economy class.  I was upgraded to business class from New York to Madrid thanks to using an American Airlines Systemwide Upgrade the airline provides to Executive Platinum members of its frequent flyer program.  Unfortunately, the upgrade only works on American metal (flights operated by AA).  Since this flight was on Iberia, I was in economy.  No sweat.  It was a very short flight.

Iberia Flight IB3912 boarded at Terminal 4 Gate K68 at 15:20.  That gate is about a 10 minute walk from the Dali Premium Lounge.  People began queuing at 15:00.   Boarding was slightly delayed.  It went smoothly once it started. 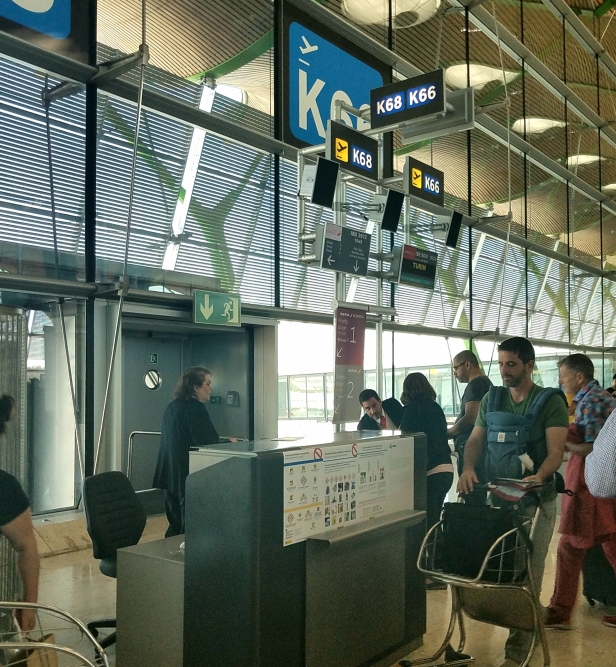 The equipment (airline lingo for plane) for the flight was an A321.  I was pleased to see that Iberia names its planes.  My opinion of this airline went up a few notches.  Ships and boats have names.  Airplanes deserve the same, not just an impersonal tail number.  Airplanes could also do with some nose art.  Virgin Atlantic Airways gets it.

One hour and 20 minutes was the scheduled flight time (the time from when the aircraft door closes at the departure gate until the door opens at the destination).

An agent in the lounge was able to get a seat in an exit row for me.   My seat was 26A, a window seat on the port side. 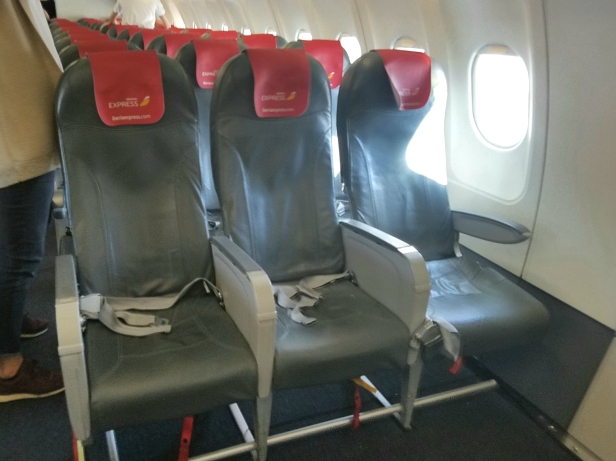 I prefer exit row seats in economy for the extra legroom.   On a short flight with no service in a narrowbody plane, an exit row economy seat is better than being up front in business class especially in this case where I was the only one in the row.  Intra-Europe business class on most European airlines is just an economy seat with a blocked middle seat, and generally when there is service it is not worth the substantial price difference.

Above, my stuffed backpack under the seat in front.  Some airlines allow no underseat storage in exit rows no matter how much space there is.  I don’t recall if Iberia let me get away with this potential faux pas.

On flights I’ve taken outside the US, many times exit row seats go unfilled.  Some airlines charge more for them, but often they may be available for assignment at the gate without charge.  Frequent flyer status with Oneworld, Iberia’s airline alliance, is how I got this seat free.

Pushback from the gate and takeoff were close to ontime.  This flight was short and uneventful.  There was no video.  During cruise I busied myself with the views and perusing Iberia’s inflight magazine.

Below is information on food and beverages available on longer flights.  Prices look reasonable and there is a good selection.

The flight soon arrived over Mallorca and we descended to Palma Mallorca International Airport. 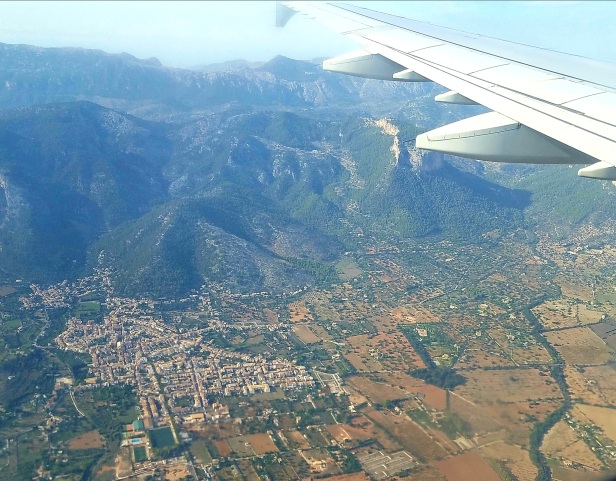 This was a great flight.  It confirmed the generally positive experience I’d had in economy class on an Iberia A340-600 in 2017.

PMI is the third busiest airport in Spain despite having an island-wide population of only about 860,000.  That stat is due to the large number of tourists.  I was looking forward to seeing why Mallorca is so popular.

What do you think?  Should airlines name their aircraft and use nose art?