e drive from Lhasa to Everest Base Camp Tibet (EBC) covered four days and three nights round trip in Fall 2018.  The primary objective was viewing Everest at sunset.  Due to the vagaries of weather, attaining that objective was always problematic.  However, any good road trip is as much about the journey as the destination.  In this instance, beautiful sights and interesting places across the high Tibetan Plateau guaranteed that this journey would be epic irrespective of the weather at Everest.

This trip was arranged through a Tibet travel agency, Tibet Vista.  There is no independent travel in Tibet.  Our transportation was via an eight-person minivan.  It was comfortable enough on the drive for our group that consisted of five tourists, a driver and tour guide.  Our route is highlighted below with magic marker TripTik style the way AAA (American Automobile Association) route planners used to do it. 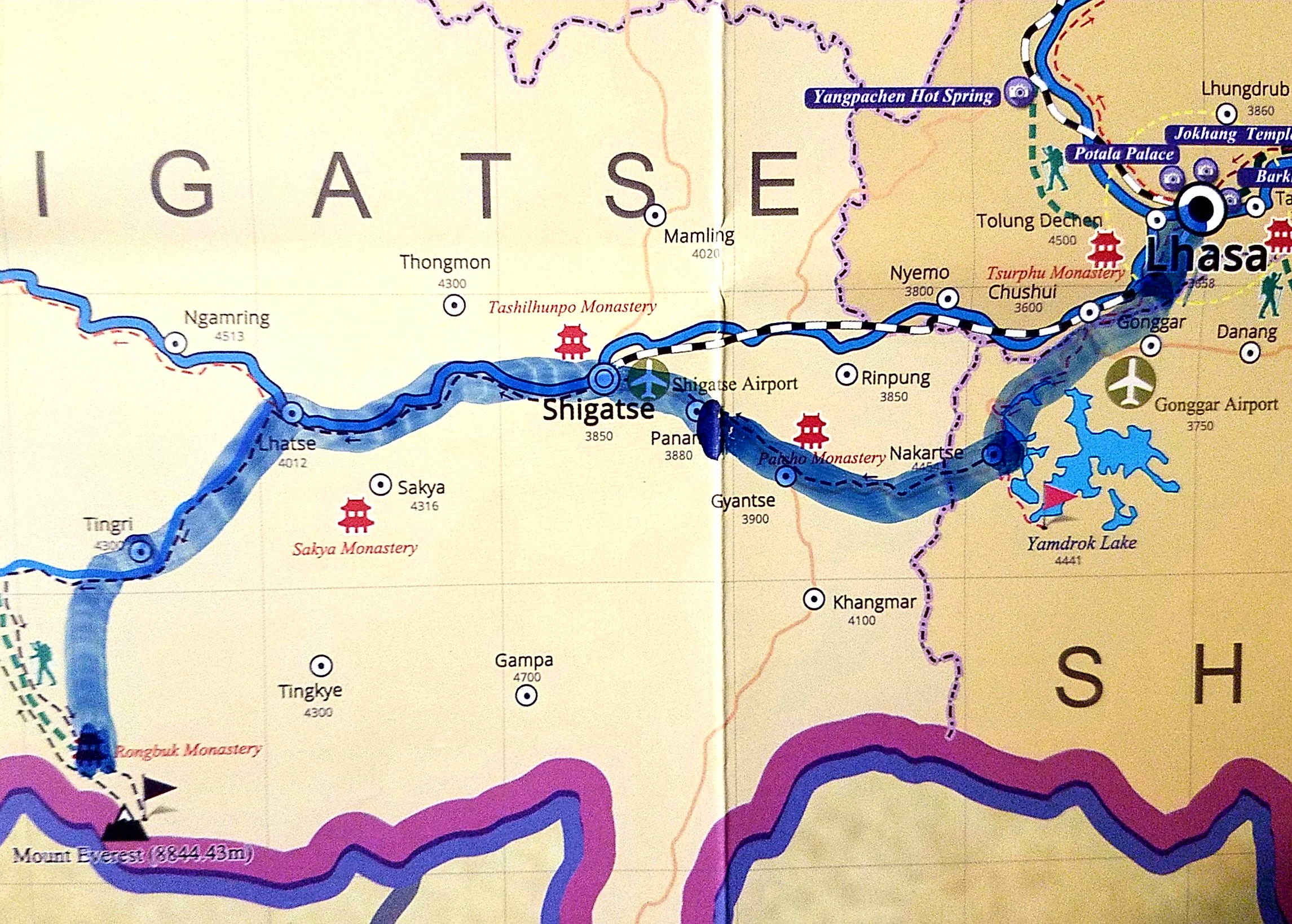 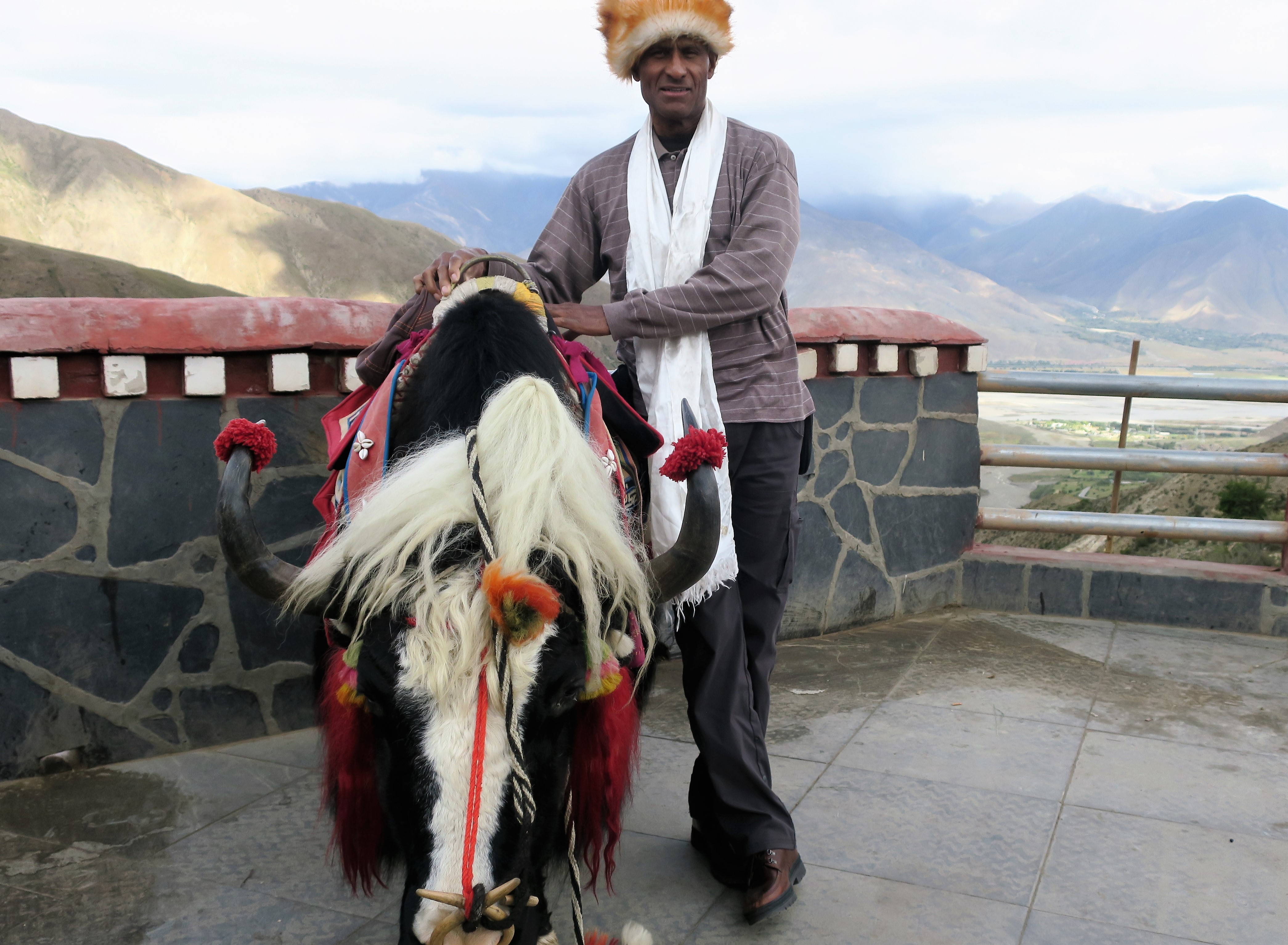 We weren’t on the road long before encountering the first of several police checkpoint.  China forcibly took over Tibet in 1950.  Tibet, technically the Tibet Autonomous Region, is a Chinese province.  China likes the word autonomous.  There are the Special Autonomous Regions of Hong Kong, Macau and Tibet.  There just doesn’t seem to be much autonomy that goes with the title.

Many Tibetans aren’t happy about it, including the Dalai Lama who is in exile and subject to arrest upon returning.  The Dalai Lama is still regarded by many locals as their spiritual and political leader.  Political discussions, other than praise for the Communist Party, can lead to summary arrest.

China is very paranoid about the possibility of dissent.  Accordingly, China closely monitors activities and movements of Chinese, Tibetans and foreigners.  At these checkpoints foreigners must produce passports and Tibet Travel Permits, a kind of visa to be allowed access to this province.  Chinese and locals are required to produce their IDs.

Usually, our guide was able to take our passports and permits inside for inspection.  Other times everyone had to dismount to be vetted individually.

The road is a modern two-lane highway with a passing lane in some places.  It is paved the whole way to EBC except for a mile or two between Lhatse and Tingri.  The road is one of China’s infrastructure upgrades to demonstrate its benevolence to the locals.  I must say infrastructure in Tibet is much better than what I saw in Nepal in 2016.

Yamdrok Lake lies about halfway between Lhasa and Gyantse.  It is large and irregularly shaped.  The bright turquoise color is striking.  Yamdrok Lake is one of three main sacred lakes of Tibet.

You can buy souvenirs, grab a bight to eat, and have a photo with a Tibetan Mastiff or yak. 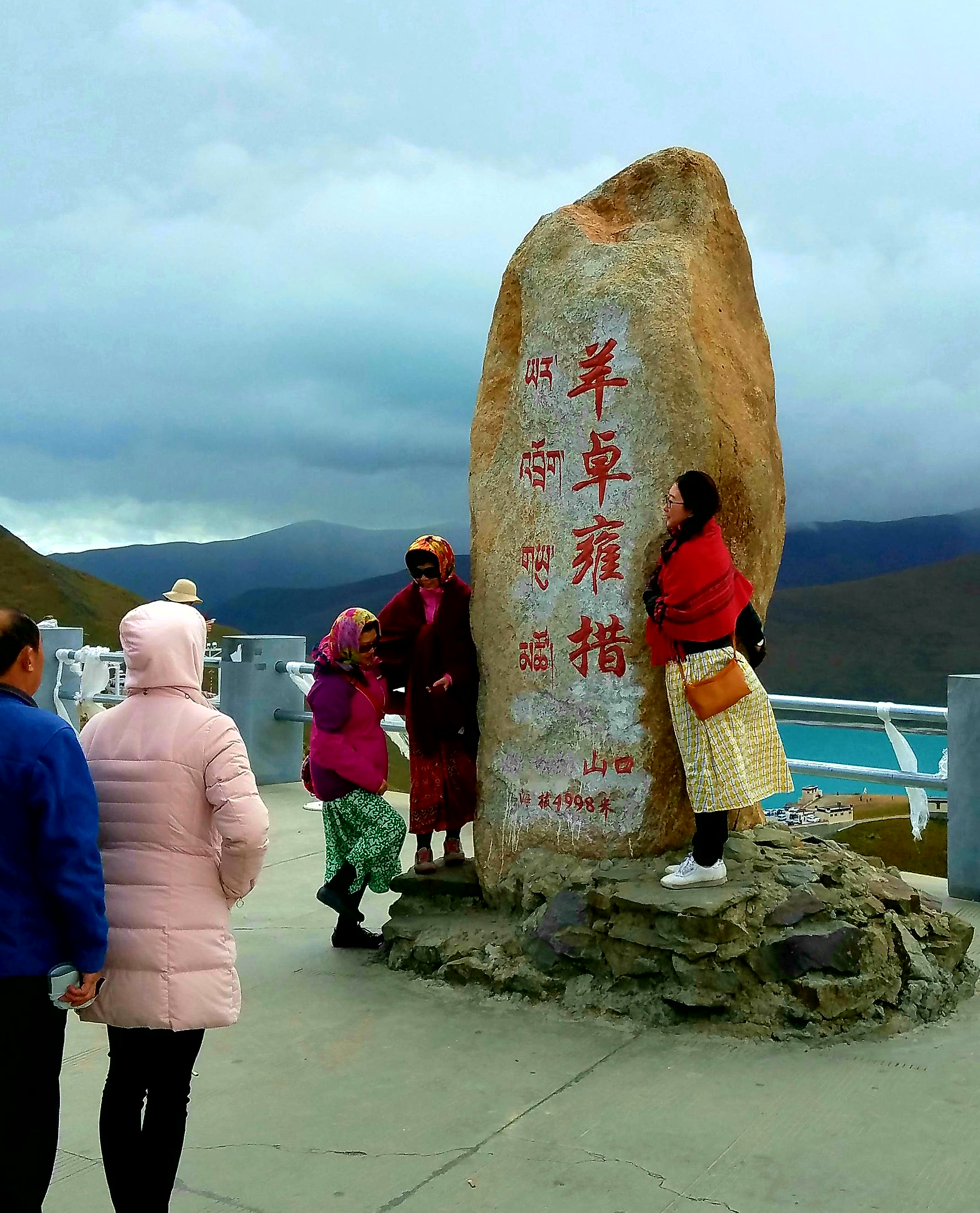 At one of the passes seemingly friendly but evil looking mini goats were approaching tourists hoping for food.  Their horns are like steel.  I had no food and didn’t want to upset them and get gored.

Passing through Gyantse we could see Gyantse Fortress built in 1390 as a Lhasa military outpost.

After seven hours of driving and sightseeing, we spent the first night on the road in Shigatse, Tibet’s second largest city.  Accommodations were provided at Tashi Choeta Hotel.  This hotel is very similar to our hotel in Lhasa.  I had a single room.  Like most tours, single occupancy comes with a slight surcharge.  We stayed here on the return as well.

In 1447, the first Dalai Lama founded Tashi Lhunpo Monastery just outside Shigatse.  It serves as the home of the Panchen Lamas who are important figures in the Gelug branch of Tibetan Buddhism.  The Panchen Lama is second in importance only to the Dalai Lama on spiritual matters.

The Panchen Lamas remained in Tibet after 1950 and did not openly object to Chinese rule.  Still, many buildings in this monastery and many others were extensively damaged in the Chinese Cultural Revolution 1966 – 1976. 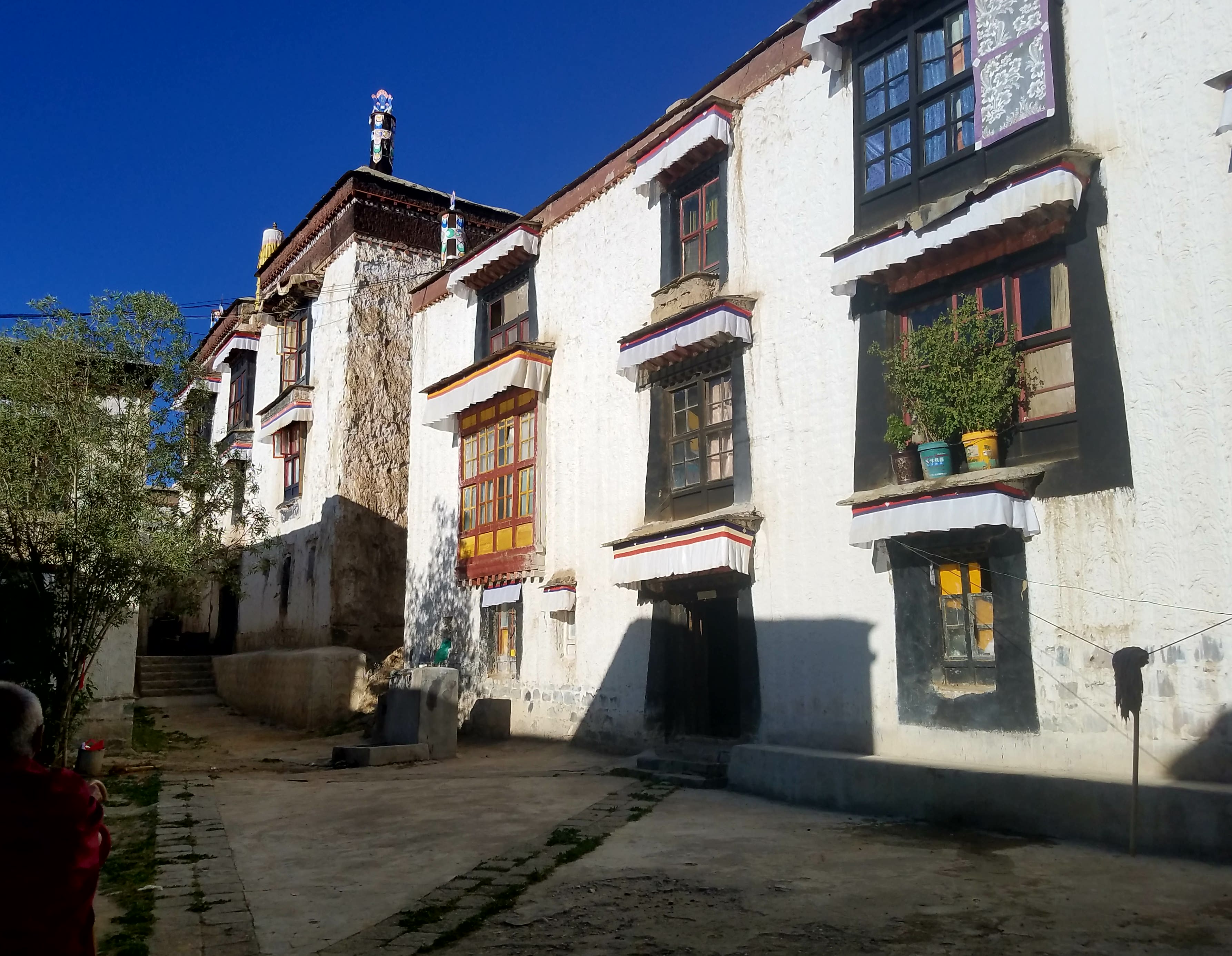 Again, no photos are allowed in the rooms of the monastery.  The interiors are beautiful but hard to describe.

Below is one of our group trying her hand at the way monks polish the floors.  I could barely move the bag.  Traci could not budge it no matter how hard she tried.

The Tibetan plateau averages between 4000 – 4500 meters in elevation.  It was a little surprising that while there are mountains along the route, most are not significantly higher than the rest of the terrain.

Much of the land is devoted to agriculture and livestock. 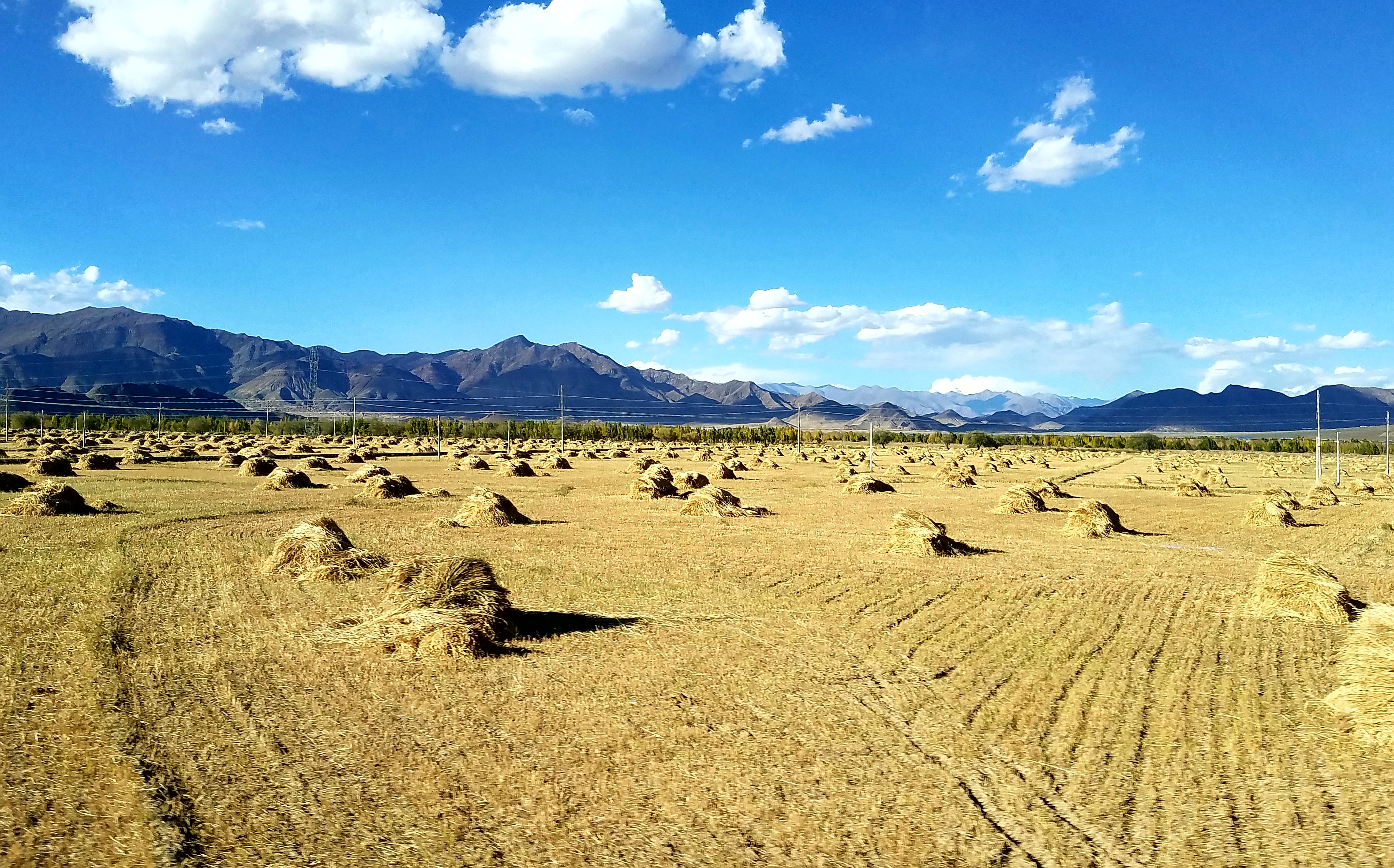 Livestock have the right of way on the road, and they know it.

We ate dinner in Shigatse twice.  It has a good selection of Chinese, Tibetan, Nepalese and Indian restaurants.  The problem was communication as neither the menus nor the staff generally had English.  On the road, we stopped a little mom & pops in small villages. 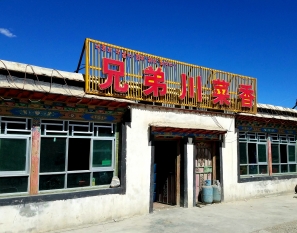 These meals were inexpensive and delicious.

Desceding from Kangbala pass we stopped to view Karola Glacier.  Karola Glacier extends from the flanks of Mt. Noijin Kangsang (7,191 meters), which is one of the four holy mountains of Tibet.  The elevation here is about 5,000 meters.

There is a point on the road that is 5000 kilometers from Shanghai.  Traci, who had grown up there, recognized a number of Shanghai license plates along our route.  That would be quite a road trip! 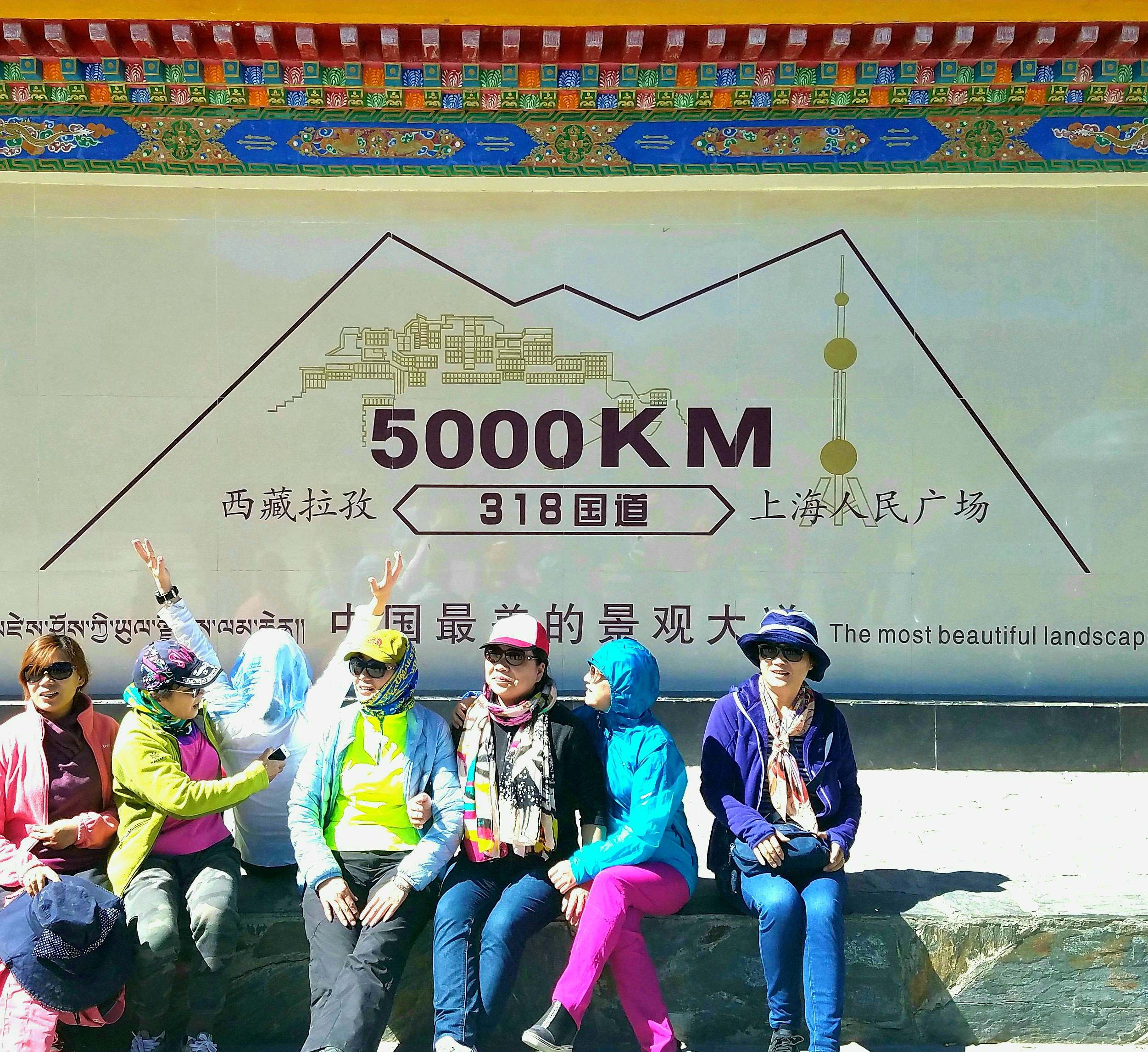 There is a very short section where the highway disappears.  It is essentially off-road driving.  I was surprised when a Lamborghini passed us here and grabbed my phone for a quick photo.  We are driving on just dirt and rocks here.  Sports cars like that don’t have much ground clearance.  I guess if you can afford the outrageous purchase price of a Lamborghini, you can also afford the outrageous costs to get one repaired.

Gyasto La Pass (5200 meters) is the gateway to Everest.

Proceeding into the park the road uses numerous switchbacks to climb to Gawu La Pass, the first point on the trip where the Himalayas and Everest could be seen.

Clouds obscured the peaks.  Arriving was still cause for celebration.  It had been a very, very long and amazing journey from Charlotte, NC.  The goal, EBC, was only one hour away! 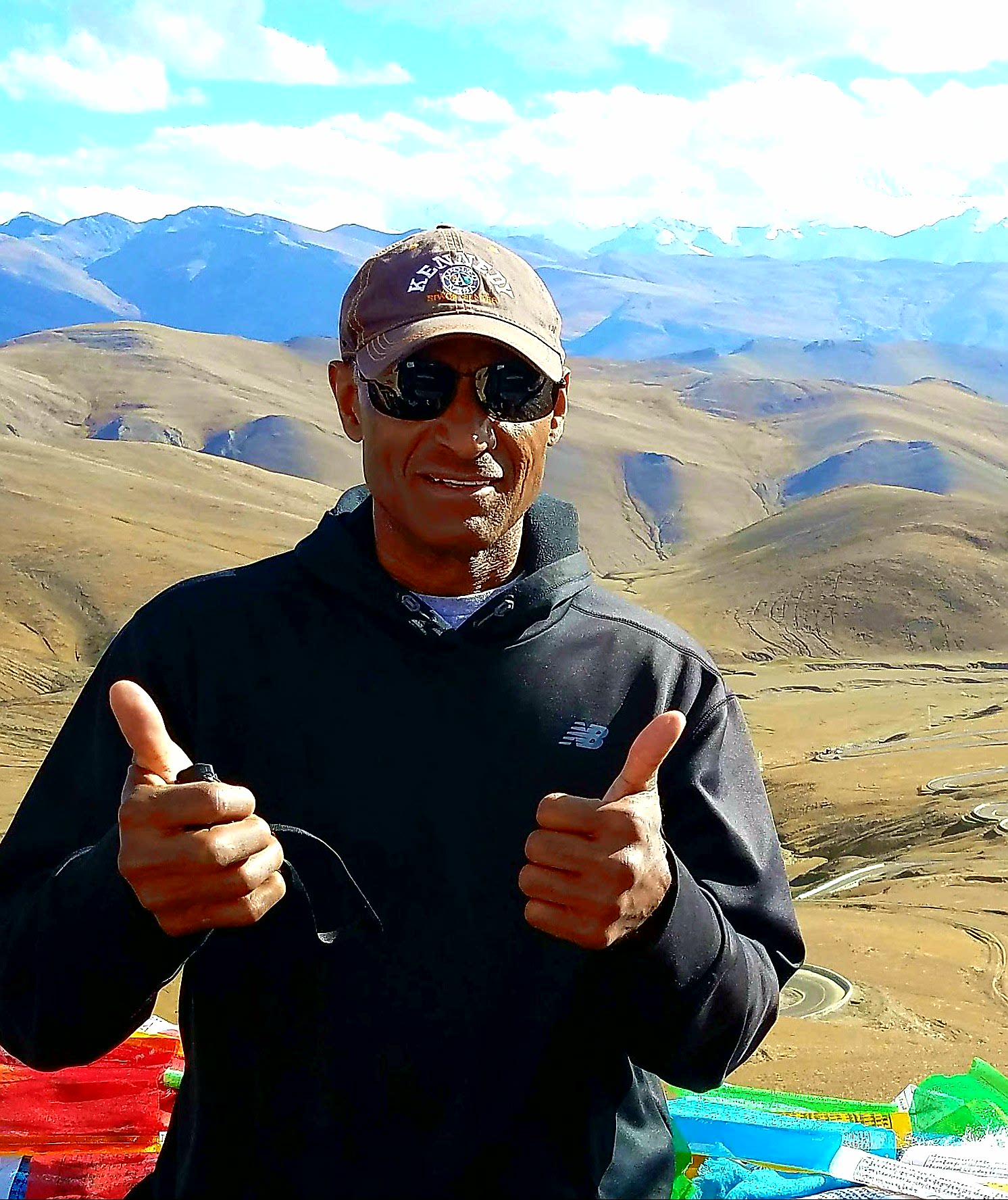 This is the view of Everest when we arrived at EBC.

Clouds were clearing just in time for sunset.  We were lucky.  Check out the view at sunset and read about EBC here.

An incredible sunset was the prelude to Mother Nature’s nighttime planetarium show.  I  marveled at the darkest, clearest, most spectacular night sky I’d ever seen.  A bright star cloud, the disc of our Milky Way Galaxy, arced from horizon to horizon.  Views like that have been stirring imaginations since… the first imaginations.

The next morning we left EBC while it was dark to view sunrise from Gawu La Pass.  We saw some of the Himalayan peaks that were obscured the day before.  From this spot you can see four of the six highest mountains on the planet.

Sunrise was pretty but not as beautiful as sunset.  Maybe it was just the cold.

The temperature dropped overnight.  Being out of the van for 20 minutes was my limit. 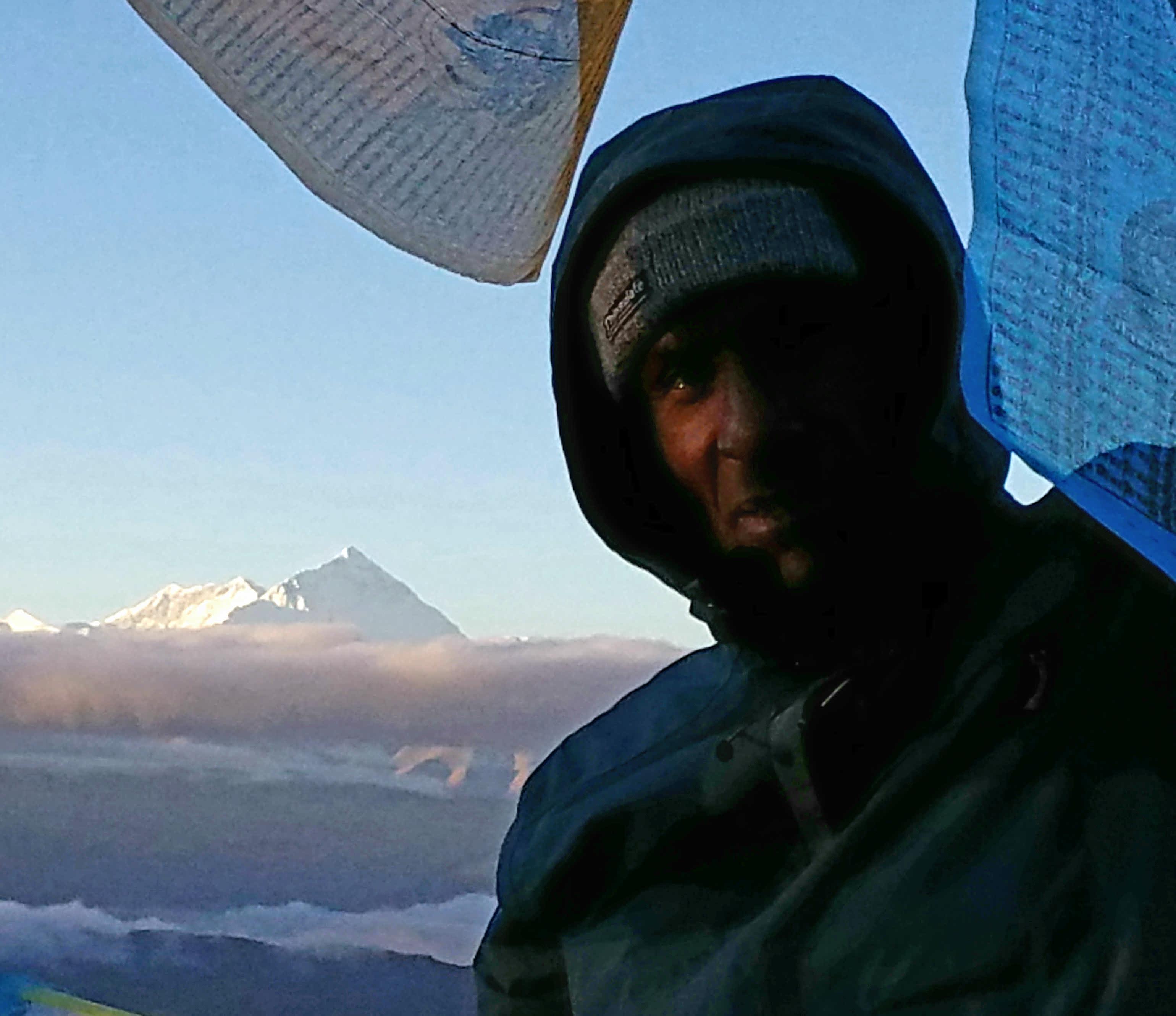 Lunch In a Private Home

On the way back to Lhasa after spending the night in Shigatse, we stopped at a private home for lunch.  It was one of the highlights of my time in Tibet.  The home was beautiful, and our host was very gracious.

Our guide read some of the prayers before lunch. 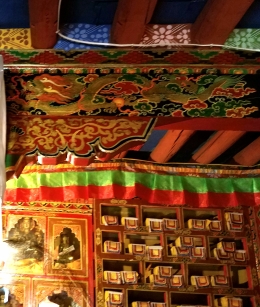 Our host prepared a traditional meal and even treated the group to a couple of lovely Tibetan ballads.

The meal was healthy and satisfying.

This was an outstanding road trip.  Our guide was knowledgeable and cordial.  The  group got along well even though we were couped up in a minivan for three days.  It was fortunate that EBC is so far from Lhasa because the trip there and back afforded the opportunity to observe gorgeous scenery and experience and learn some of the culture of Tibet.

47 thoughts on “Road Trip To The Roof Of The World – Everest Base Camp, Tibet”