Alaska Airlines is a Seattle, WA based airline with a route network almost entirely within the US.  It may not be widely known around the world, but it is the best US airline in my view.  A few years ago its survival was under threat.  Delta Air Lines terminated its partnership with Alaska and then attempted to cripple it by greatly expanding Delta operations in Seattle.  American Airlines also terminated or planned to terminate much of  its partnership with Alaska.

Alaska survived Delta’s predatory attempts, and American has done an about face.  Alaska Airlines’ future looks bright.  That should make American Airlines frequent flyers and anyone concerned about competition in the US airline industry happy.  I know I am.

Alaska Airlines Is The Best US Airline

Every airline has strengths and weaknesses.  Alaska Airlines has three major strengths:

Operationally, Alaska is always one or two in US on-time statistics.  It is at least on par with or better than Delta, which is routinely praised for its operations.  When Alaska was a Delta partner, I often flew its flights out of Seattle.  Service of flight attendants, gate agents, and lounge staff was excellent.  Again equal to or better than Delta, which has the best service among the US Big 3 airlines.

For many, Alaska’s best attribute is its mileage-based frequent flyer program.  Almost all major airlines have shifted to awarding miles based on the fare paid rather than distance flown on its own aircraft.   The switch to revenue-based programs generally benefits those flying on expensive tickets usually purchased by an employer.  Folks (me) who pay for their own tickets and search for inexpensive fares get the shaft.  They earn substantially less miles than under a mileage-based system.

Delta was the first US airline to adopt a revenue-based system.  It asserted that such a system would increase revenue.  The only way that happens is if people buy more expensive tickets or fly more often than they would under a mileage system.  There is an inherent conflict of interest in employers paying for tickets and employees receiving the benefits.  Revenue-based programs exacerbate that conflict.

Alaska’s Mileage Plan offers elite status starting at 20,000 miles and top-tier status at 75,000 miles with the requisite number of segments.  Complimentary upgrades are processed at booking on some fares.  Alaska has outstanding international partners and some good deals in its award charts.  Yes it still has award charts.  Partners for earning and using miles include Cathay Pacific, Qantas, Japan Airlines, British Airways, and Korean Air.

In the business world, and just about everywhere else, size maters.  Alaska Airlines has 329 aircraft in its fleet.  American, United and Delta have fleets of 1569, 1380 and 1349 aircraft respectively.  Alaska transports about 25% of the number of passengers as American and Delta.  These comparisons were even more lopsided before Alaska’s 2015 merger with Virgin America.  Delta believed it could establish a hub in Seattle and either drive Alaska out of business or force it to be more Delta friendly.

Alaska is primarily a West Coast airline.  It does not serve Charlotte, NC (CLT) my home airport.  Outside the US, Alaska serves a few cities in Canada, Mexico and Costa Rica.   Alaska was not a very useful airline for most people on the East Coast or in the American Midwest.  Here is the route map from Alaska’s flight magazine. 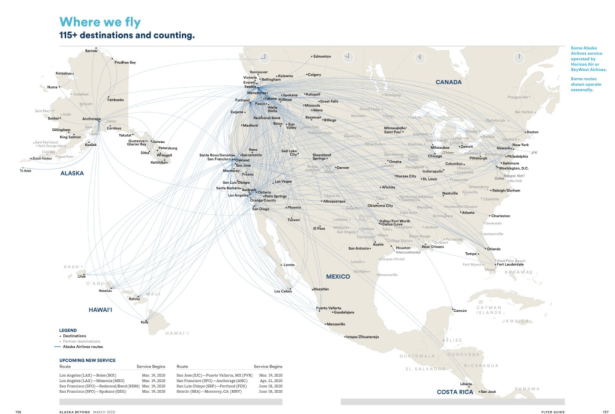 Even though Alaska is a great airline, I could not take advantage of its wonderful  service, operations or outstanding frequent flyer program.  That should change with its revamped American Airlines partnership.

American And Alaska Go From Break Up To Make UP

The relationship between American and Alaska had been going downhill.  Effective January 1, 2018, reciprocal elite benefits, including priority check-in and boarding, preferred seating, and baggage fee waivers were discontinued and American members would no longer earn award miles or qualifying miles, segments, or dollars on Alaska flights.

Last year, American stated that effective March 1, 2020 it would no longer be possible to use American miles for travel on Alaska Airlines, and vice versa.  The destruction of the relationship between American and Alaska was at the behest of American.  It made no sense.  It appears that finally dawned on the people in the C Suites at American.

In February 2020, Alaska and American unveiled a new, stronger partnership.

This is good news generally for US travelers because it should guarantee the viability of Alaska Airlines by addressing one of its weaknesses effectively expanding its route network especially internationally.  Not only is Alaska a good airline, but losing it as a competitor in the already very concentrated US domestic aviation market would be bad for competition and could lead to higher prices and less consumer-friendly terms in airline loyalty programs.

Alaska’s membership in Oneworld may allow some flyers the ability to earn top tier Oneworld Emerald Status flying only 75,000 miles instead of 100,000 miles in American’s program.   The renewed partnership saves some face for American Airlines, which had to be still smarting from having partner LATAM stolen out from under its nose by Delta.

6 thoughts on “Breaking Up Is Hard To Do – Alaska Airlines And American Airlines Call Off Divorce, Strengthen Partnership, And Alaska Will Join Oneworld Alliance”