I visited Switzerland in May 2017 for the primary purpose of journeying to the Jungfraujoch, Top of Europe.  In 2014, I made the same trip.  All of the photos I had at the time were lost.  I needed to repair my the phone.  A Sprint rep assured me several times that all data and photos were safe.  Three guesses how that turned out and the first two don’t count.

The tour began in Zurich.  Initial transportation was by coach to Lucerne and then to Interlaken for a repast and the opportunity to explore this picturesque town in the Bernese Highlands.

Interlaken, Switzerland is a city of 23,000 residents.  It is the gateway to the Bernese Alps and Jungfraujoch.

Shops, restaurants and views in this town are very popular with tourists.  It was the kind of warm Spring day that makes it impossible to stay inside. 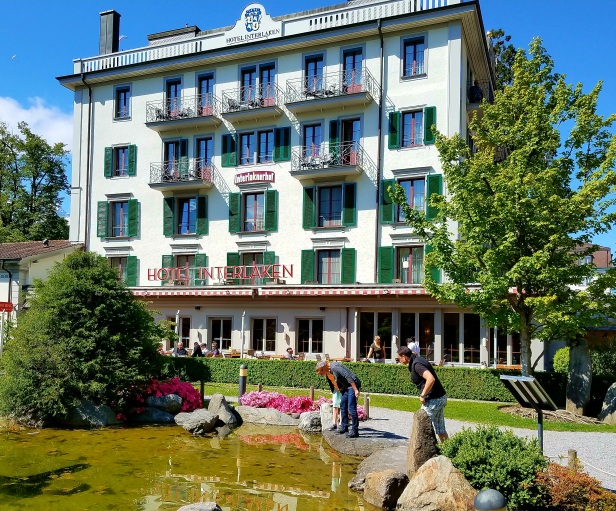 Those who are daring can take a tandem paraglider flight to the mountains.  Flights run from 170 Swiss francs.  I was tempted but time did not permit. 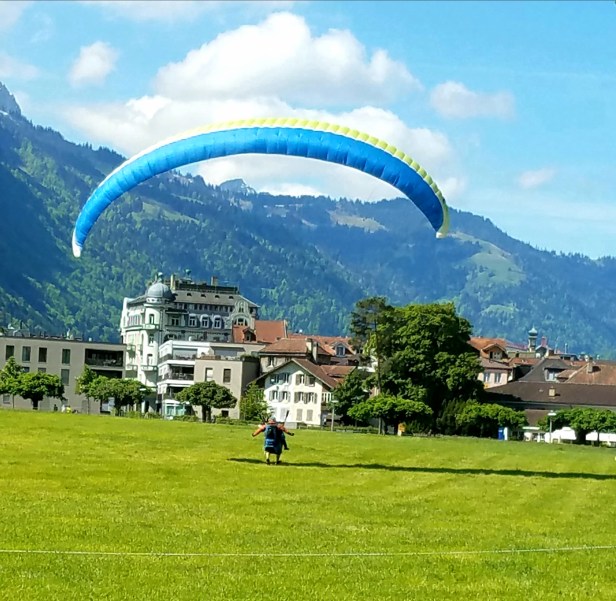 The tour continued by coach through beautiful alpine scenery to Grindelwald where we transferred to a train to the resort town of Kleine Scheidegg.

In Kleine Scheidegg (6,765 ft), the tour transferred to the Jungfraubahn, the train that runs to the Top of Europe.

The railway to the Top of Europe runs inside the Eiger and Monch Mountains.

The railway affords an excellent view of the infamous Eiger North Face (Nordwand).  Also called the Mordwand or murder wall, it has been the site of numerous mountaineering triumphs and tragedies.  The North Face towers more than one mile above Kleine Scheidegg.

The Eiger Sanction, a 1975 thriller starring Clint Eastwood, was filmed here.  Eastwood did his own stunts and climbing scenes.  Underscoring the danger, sadly a British climber died during the filming.  The movie and the history of the Eiger North Face were a big part of the attraction for making this trip.

There are two stations inside the mountain.  Windows were cut into the mountain at each station during construction of the railway.  Tourists can enjoy spectacular views of the mountain at Eigerwand Station and Eismeer station.

Passengers can take a quick look as the train stops for only about five minutes. 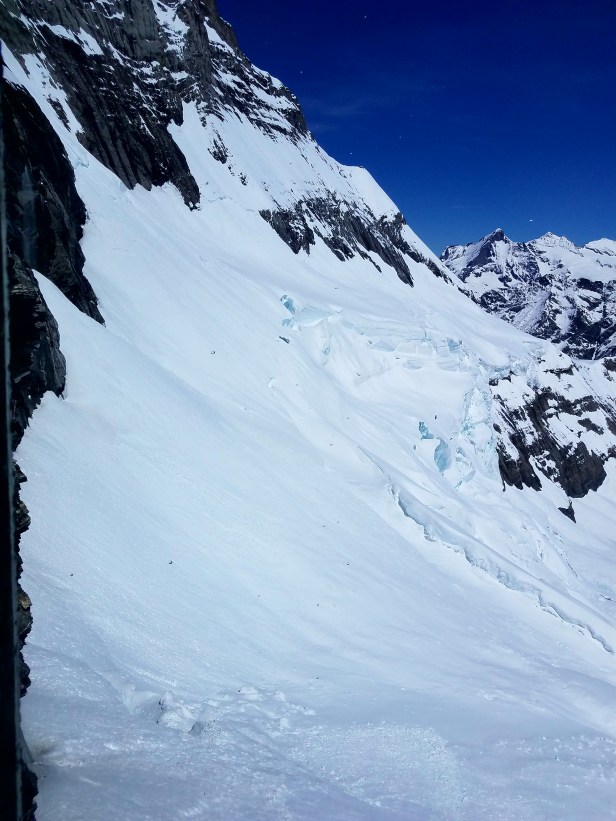 Jungfraujoch – The Top of Europe

The ride ends at Jungfraujoch Station inside the Monch.  This is the highest railway station in Europe.

The Jungfraujoch (11,371 ft) is a saddle or col connecting Monch and Jungfrau mountains.  On this day in May, sun reflecting off the snow created enough warmth that some were outside in T-shirts.

The Sphinx Astronomical Observatory sits on a rocky perch overlooking the Jungfraujoch.  It is reached via elevator from Jungfraujoch Station.  Hang on to your butts, the elevator travels faster than 6 meters per second.  The observation deck offers more amazing views.

The Jungfraujoch is neat because people walk around on snow fields at over 11,000 ft.  Views are not the only entertainment.  Snow Fun Park lets winter sports lovers refresh themselves with snow tubing, a rope slide, skiing, or snowboarding.  Equipment is available for rent.

The altitude may have been getting to me.  Bagging this bucket-list item for the second time was cause for joy but … 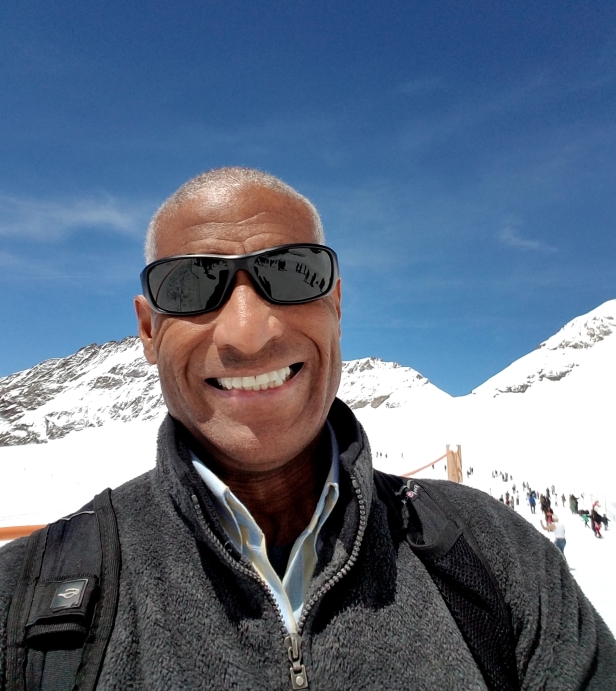 If there is bad weather and venturing outside is inadvisable, the Jungfraujoch has several shops and restaurants indoors.  Inside the mountain, artists have created several rooms with ice sculptures in passages carved out of the ice and snow.

We stayed at Jungfraujoch for 90 minutes then boarded the train back to Kleine Scheidegg.  Switching trains, the tour traveled through the beautiful area around Lauterbrunnen. 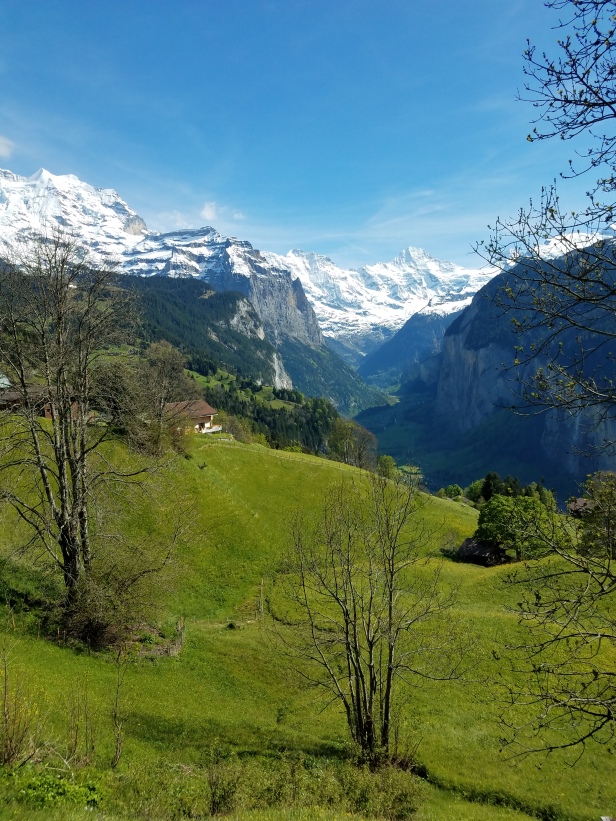 Every facet of this trip was worth the effort of a return journey.  Interlaken and the trip to the Jungfraujoch present some of the most beautiful scenery on earth.  Villages and towns seem like they are out of a storybook.  The mile-high Eiger Nordwand inspires fear and awe.  I don’t know of places so easily accessible other than the Jungfraujoch where people can enjoy 100 mile views and walk around at 11,000+ ft. on snow fields that are the origin of a mighty glacier.

One side benefit of the current travel hiatus is it gives me the chance to catch up on posts I had not gotten to.  I hope you liked this trip down memory lane and look forward to the time when we can all pursue our travel dreams safely.

Have you been to the Jungfraujoch?

34 thoughts on “Interlaken, Switzerland To The Top Of Europe – Jungfraujoch May 2017”