Please see these posts to compare this flight with Japan Airlines flights in first class, business class, and economy class on previous trips.

The buffet in the temporary JAL First Class Lounge was switching to the lunch menu as it was time to board.  Wolfing down a snack before heading to the gate was tempting.

However, I’d had two breakfast and there would be a meal service shortly after takeoff.  I finished up on my laptop and headed to the gate a few minutes after  boarding for the flight was announced in the lounge.

Passengers had already formed orderly boarding lines at nearby Gate 114.  Oneworld Emerald status put me in Group 1, and I joined at the back of the line.

Boarding began at 10:45 which was 10 minutes later than scheduled.  All passengers used the forwardmost door on the port side.  Economy and premium economy passengers envied the spacious seats and luxurious amenities afforded to the folks in first class and business class as we made our “perp walk” to the back of the plane. 🙂  This aircraft has a total of 244 seats in four classes of service, first class, business class, premium economy and economy. 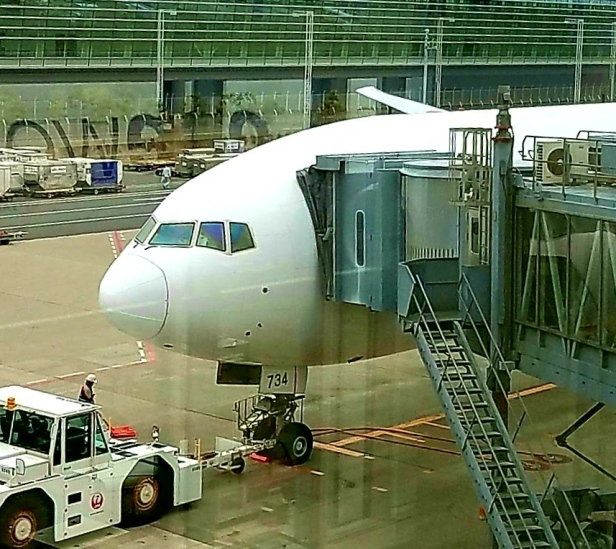 JAL premium economy on this aircraft consists of 40 JAL Sky Premium seats arranged 2-4-2 in five rows in a cabin between business class and economy.

Sky Premium Seats are JAL’s latest premium economy seat.  These seats are installed on JAL 777-300ER, 777-200ER, and 787-9 model aircraft.  Compared to older seats, they offer about four more inches between rows, a shell design that reclines the seat without encroaching on the space of the seat behind, and a retractable privacy  divider at eye level.

My seat, 17C, was in the first row of the premium economy section.  The seat is 19 inches wide.  Premium economy seats not in exit rows enjoy a very generous seat pitch of 42 inches.  In terms of size, these seats are equivalent to a typical domestic first class seat in the US.

Premium economy seats have adjustable leg rests and footrests (except at the bulkhead).

17C is a bulkhead, exit row, aisle seat.  On this model aircraft, there is tons of legroom at the bulkhead.  Unlike some other aircraft models, the housing for the emergency slide does not encroach on legroom. 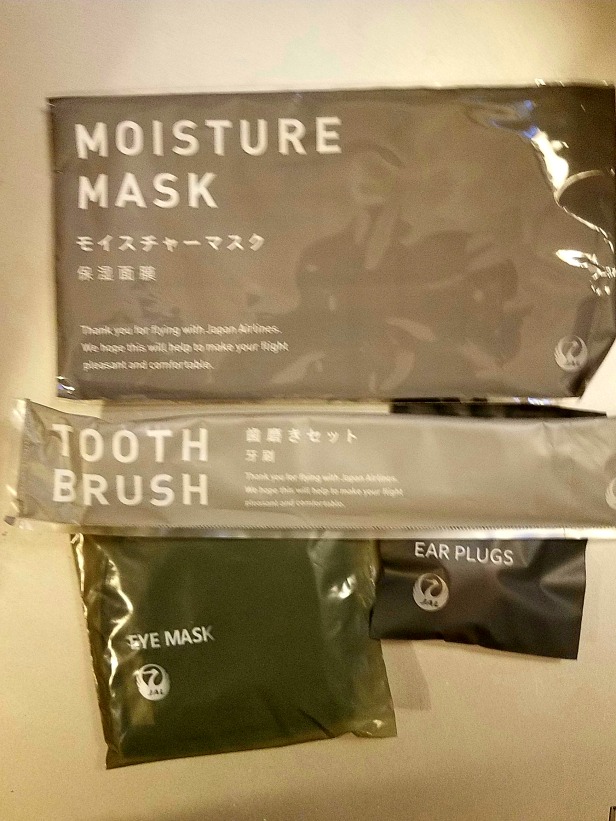 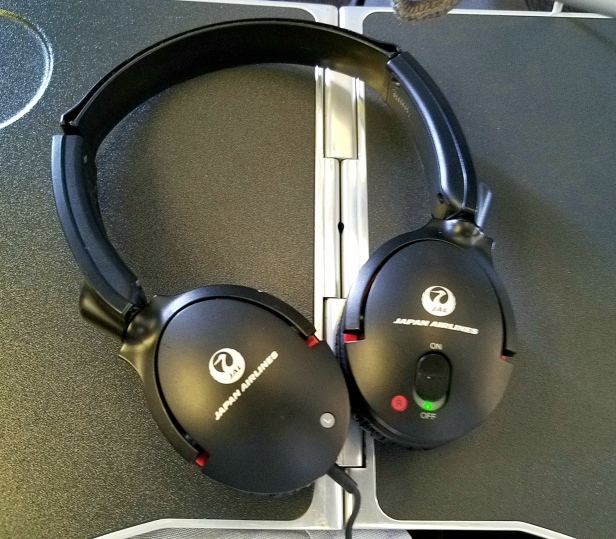 A moisture mask in the amenity kit was a first for me.  Japan Airlines was concerned about onboard hygiene even though in late January coronavirus was not being viewed as much of a threat in the West.  Passengers could, but were not required to, wear a mask inflight. 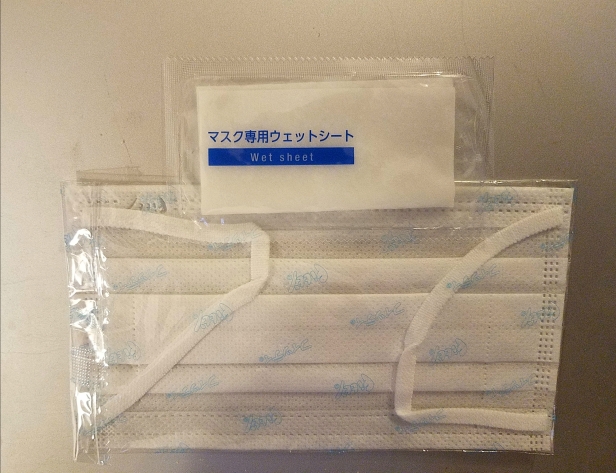 This face mask is now proving useful for trips to the grocery.

Wifi is available.  Charges are reasonable and there are no data limits.  Payment, however, must be made with a JAL credit card.

The aircraft left the gate at 11:09 and took off  at 11:28.  The flight followed a convoluted route for several minutes before finally assuming our initial heading to New York.

Flight attendants distributed menus at 11:48 and came by with warm towels eight minutes later.  The towels were scented with an pleasant aroma.

Lunch was served at 12:40.  I had yellow chicken curry Asian style with miso soup and side dishes. 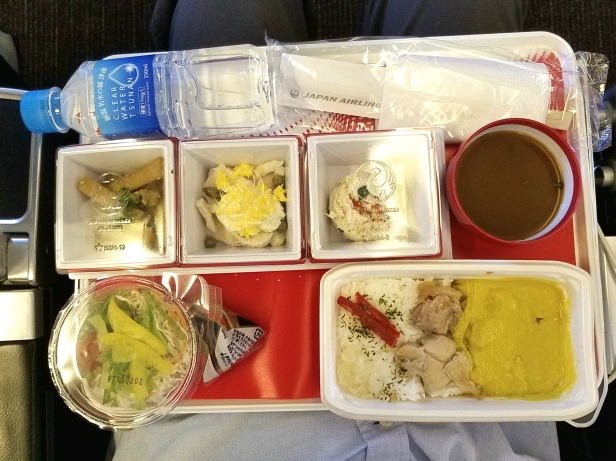 It was then time to relax with a drink and a movie while I tried to forget the $140 taxi ride to the airport in Osaka.  The video screen is 12 inches in size measured diagonally.  That is a decent size for premium economy.  JAL’s Magic-V entertainment system always has a good variety of movies, shows, documentaries audio selections and games.  IFE also offers rokugo, Japanese comedy monologues.

Flight following displays latitude and longitude information.  The great circle route between Tokyo and New York comes close to the North Pole.  I planned to use the lat/long info to see how close we got to it.

A great circle route is the shortest distance between two points on a sphere and is the preferred route all other things equal.  In this case, more favorable winds aloft at lower latitudes pushed the actual flight route much farther south. 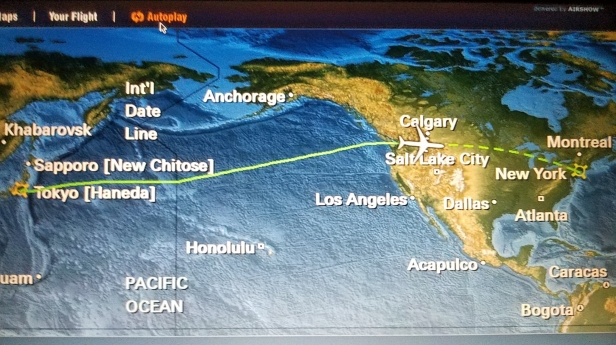 Midway through the flight I requested a snack of Udon noodles and milk bread.  I’m proud to say that I managed to eat the noodles with chopsticks without making much of a mess.

These seats have a good deal of recline.  Coupled with the leg rest, sleeping was easy.  The seat next door was vacant, and that always creates additional comfort and privacy. 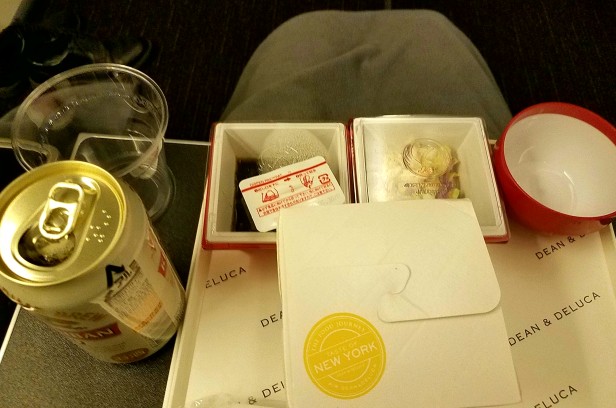 The flight landed at JFK at 09:42 and arrived at the gate at 09:55, 10 minutes later than the takeoff ETA.  Still thanks to the international dateline, the flight landed in New York more than one hour before it departed Tokyo.

I enjoyed the flight.  For a 12.5-hour flight, the seat was very comfortable thanks in part to having no seatmate.  Food and beverages were very good even though certainly not gourmet quality.  All in all, JAL premium economy is a very nice compromise between business class and coach.  A lie flat business class seat is certainly preferable, but the JAL Sky Premium seat offers much greater space and comfort compared to economy.  Considering the usual price differential between premium economy and business class, booking premium economy can be a useful sweet spot for travelling in a bit of comfort and luxury while saving money or airline miles.

Do you think premium economy is a good option for your long-haul travel?