CNN Travel created a good test of travel knowledge.  For me, the Aviation Quiz was a bit easier than the Cities Quiz although there were still a couple of questions on this quiz that were impossible for this aviation enthusiast.  The correct answers and some additional commentary are below.  I hope you took the quiz and did well.

Also let’s hope for better weather on Saturday for the first launch of a manned space mission from the US since 2011!

2.  Before the Covid-19 pandemic, what was the world’s busiest airport in terms of passengers? Answer: e. Hartsfield-Jackson Atlanta  (Atlanta is the smallest city among the choices but the airport handles the most passengers because it serves as the primary hub for Delta Airlines.  The top three airports are Atlanta (ATL) Beijing Capital Airport (PKK) and Los Angeles (LAX) last year serving approximately 110 million, 100 million, and 88 million passengers, respectively.  ATL’s lead is safe despite a the rapid growth of civil aviation in China.  Last year, China opened a new Beijing airport, Daxing International (PKX).  With two airports splitting Beijing traffic, Atlanta’s position is secure for the foreseeable future.

3. Identify the airlines by their tailfin logos:

4.  What type of airplane is the US President’s Air Force One? Answer: b. Boeing VC-25 [the military version of Boeing’s 747 — read more about it here]  This question is a bit tricky because Air Force One sure looks like a 747 and most don’t know the military designation for this aircraft.

5.  Which two countries were connected by the Kangaroo Route? Answer: England and Australia [Back in 1938, this 37-stop aviation marathon took 10 days. Read more about it here]  (The Kangaroo Route started with Qantas in 1918.  It was a 37-stop 10-day marathon from London to Perth.)

6.  Which direction — north, east, south or west — would you travel between these airports identified only by their codes? a. LAX to HNL (West — Los Angeles to Honolulu); b. LGA to MCO (South — New York to Orlando); c. LHR to JNB (South — London to Johannesburg); d. BKK to PVG (North — Bangkok to Shanghai); e. ARN to SVO (East — Stockholm to Russia).

7.  Match the massive airplane to its nickname: 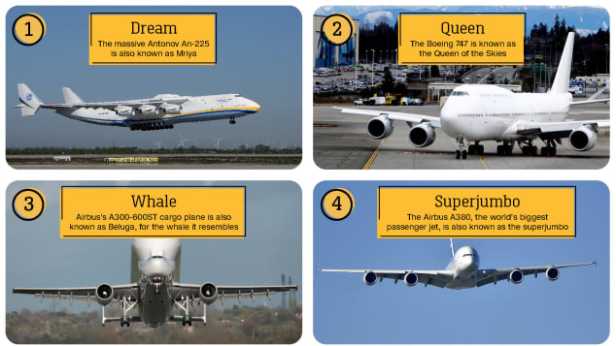 (This question is a bit tricky because the 747 and A380 are both referred to as a superjumbo and the 787’s is the Dreamliner.)

8.   Which airline had the most aircraft at the beginning of 2020? Answer: b. American Airlines.  (As of 2019, the top 5 airlines by fleet size are American Airlines (950), Delta Air Lines (880), United Airlines (777), Southwest Airlines (753), China Eastern Airlines (607).  In terms of number of aircraft currently operating, the order likely has changed.  Southwest serves mostly domestic markets which the pandemic has impacted less than international flights.  Southwest has probably passed United and maybe Delta, at least for the time being.) 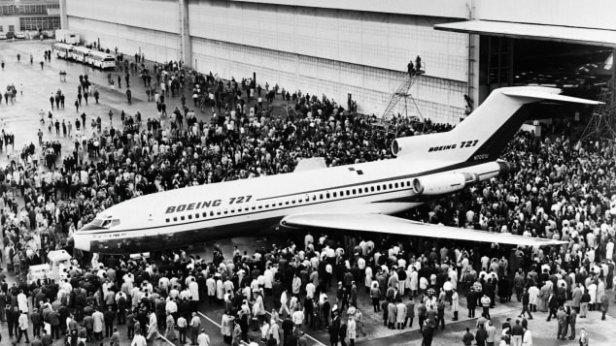 (The 727 is an aircraft I flew on frequently back in the 70s, 80s and 90s.  The MD-10 is another popular tri-engine aircraft from the same era.  Trijet aircraft were developed because engine technology at the time was unable to produce sufficient thrust and reliability to fly larger payloads with only two engines.)

How did you do?  Have you enjoyed the quiz so far?  Next week I’ll share another part of the CNN Travel Quiz to test our travel knowledge.  Thanks for giving it a go.