Airplanes are my preferred method of long distance travel but when visiting a new country, trains provide some advantages.  Trains offer better views of the countryside and the way ordinary people live and are generally better for getting a feel for the local population and culture.  In 2015, that was my thought process in deciding to travel by train from Nha Trang to Ho Chi Minh City, Socialist Republic of Vietnam.

Seeing Vietnam was something I’d wanted to do for a long time.  Having graduated high school in 1970 at age 17, I never served in Vietnam or the military (Civil Air Patrol notwithstanding).  My number in the 1971 Selective Service lottery was 256 and the draft didn’t come close to that number, thankfully.  Back then, I passed on volunteering for an all-expenses-paid (potentially one way) Vietnam tour curtesy of Uncle Sam.  This trip was a way to see part of a country that, but for the luck of the draw, I could have known all too well 50 years ago. 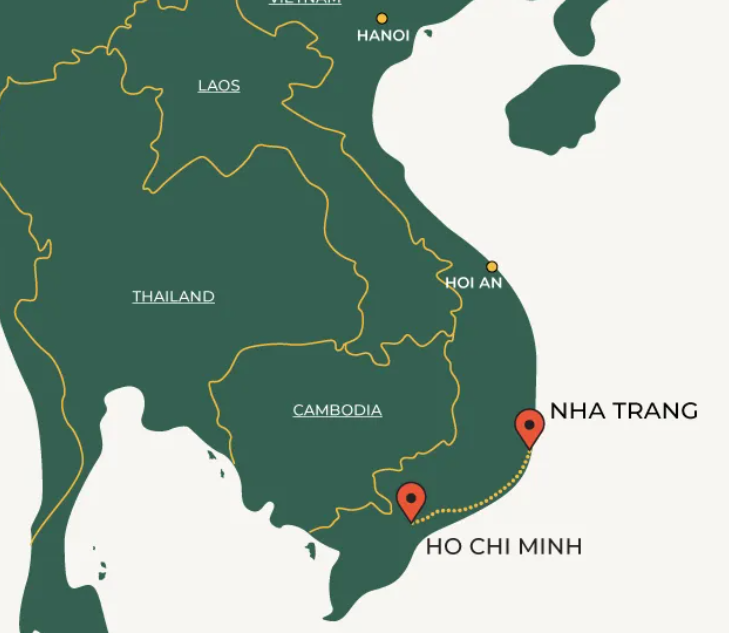 In this instance, taking the train was a bit of a sacrifice because the train takes about eight or nine hours while flight time is only about one hour.  Because of competition among low-cost airlines in Vietnam, the cost of flying is the same (or even cheaper) than taking the train.  A one-way, second-class train ticket costs about $18 and an economy one-way plane ticket on Vietjet Airlines has a base cost of $24.  In 2015, the route was  served by six trains per day.

I arrived at the Nha Trang rail station by taxi.  It is a short ride from the downtown Sheraton hotel where I was staying.

The station has a comfortable waiting room and ticket office.  Passengers can buy snacks to carry on the train.  The ticket agent spoke good English.

The train arrived on time.  Passengers were asked to wait on the platform for several minutes before being allowed to board.

I bought a ticket for a second-class soft seat online.  Seats are assigned when you purchase the ticket.  It turned out that the seat next to me was vacant.  That always makes a journey more pleasant and comfortable whether on a plane or train.  Soft seats are slightly wider than typical airline premium economy seats and have several more inches of leg room.

Vietnam Railway trains also have first class sleeper cars with four or six beds per compartment.  Since this was not an overnight trip, purchasing a sleeper berth wasn’t worth it on this trip.  Sleeper berths are beds not seats.  Seats are much better for viewing the countryside. 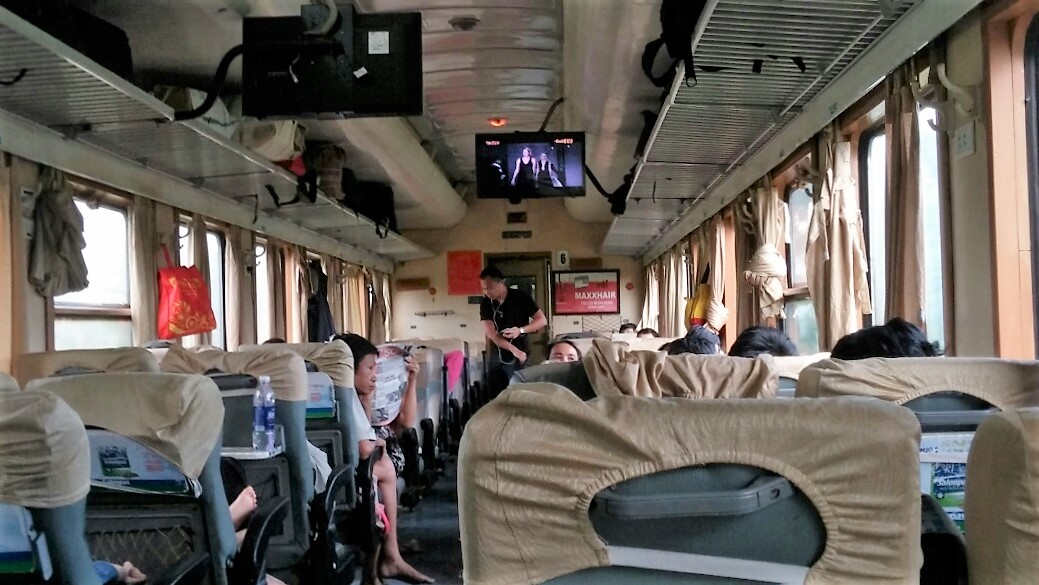 Nha Trang is on the coast.  Initially, the route features lovely views of the South China Sea before turning inland where the scenery is dominated by hills, farm land, and rice paddies.

Bread fruit is a popular crop in addition to rice.

The railway runs through the center of many towns and villages. The number of stops varies depending on the train that you select. 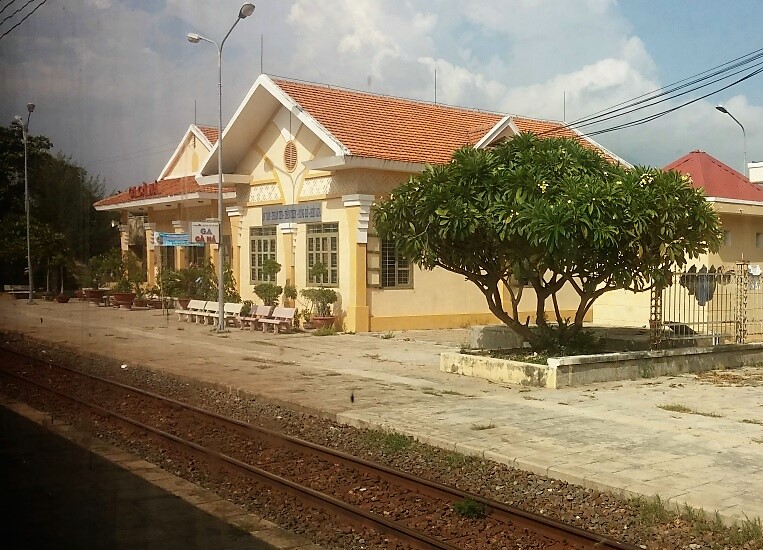 The train flies through many of the villages.  It struck me that many of the grade crossings appeared to have little if any public safety protections.

Vendors came through the coach several times offering food and drinks.  I tried a soupy chicken and rice dish.

The seat was comfortable enough that I was able to get an hour or two of sleep before pulling into the station at Ho Chi Minh City after dark. 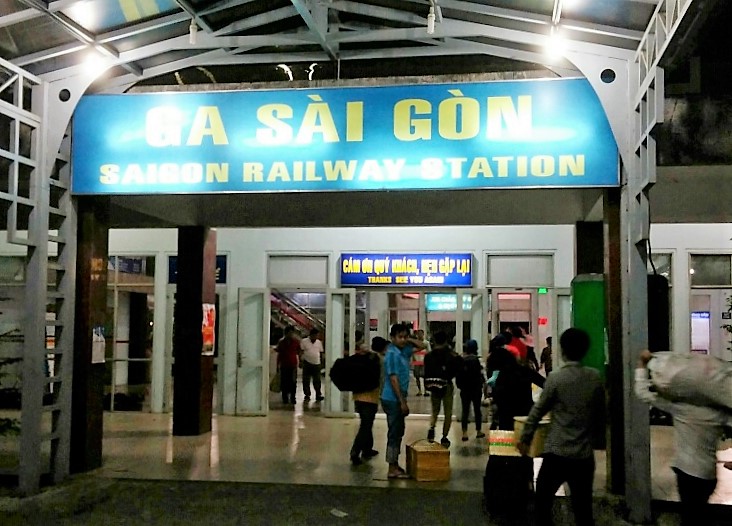 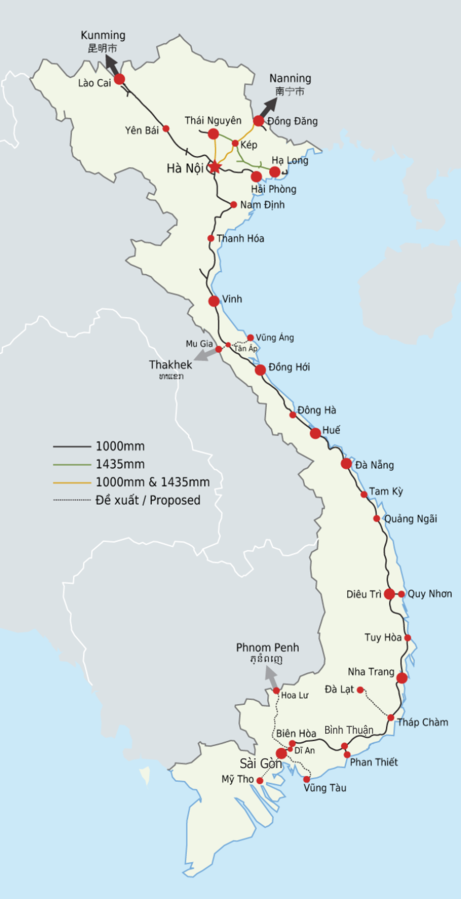 I was more adventurous in 2018 when I took a 40-hour train trip from Beijing, China to Lhasa, Tibet in a four-person sleeper car.

I greatly enjoyed the experience of an eight-hour train ride from Nha Trang to Ho Chi Minh City.  The trip provided a brief but up close view of some of  the Vietnam countryside and the way of life of typical Vietnamese citizens.  In this case, taking the train was definitely the way to go.