This post covers an unreviewed flight in 2018 on EVA Air from Cebu, Philippines to Taipei, Taiwan.  Taiwan-based EVA Air is one of the best airlines in the world.  I hope this post about a short/medium haul international flight on a narrow-body aircraft illustrates that point and soothes the pangs of travel withdrawal that I and maybe others are enduring. 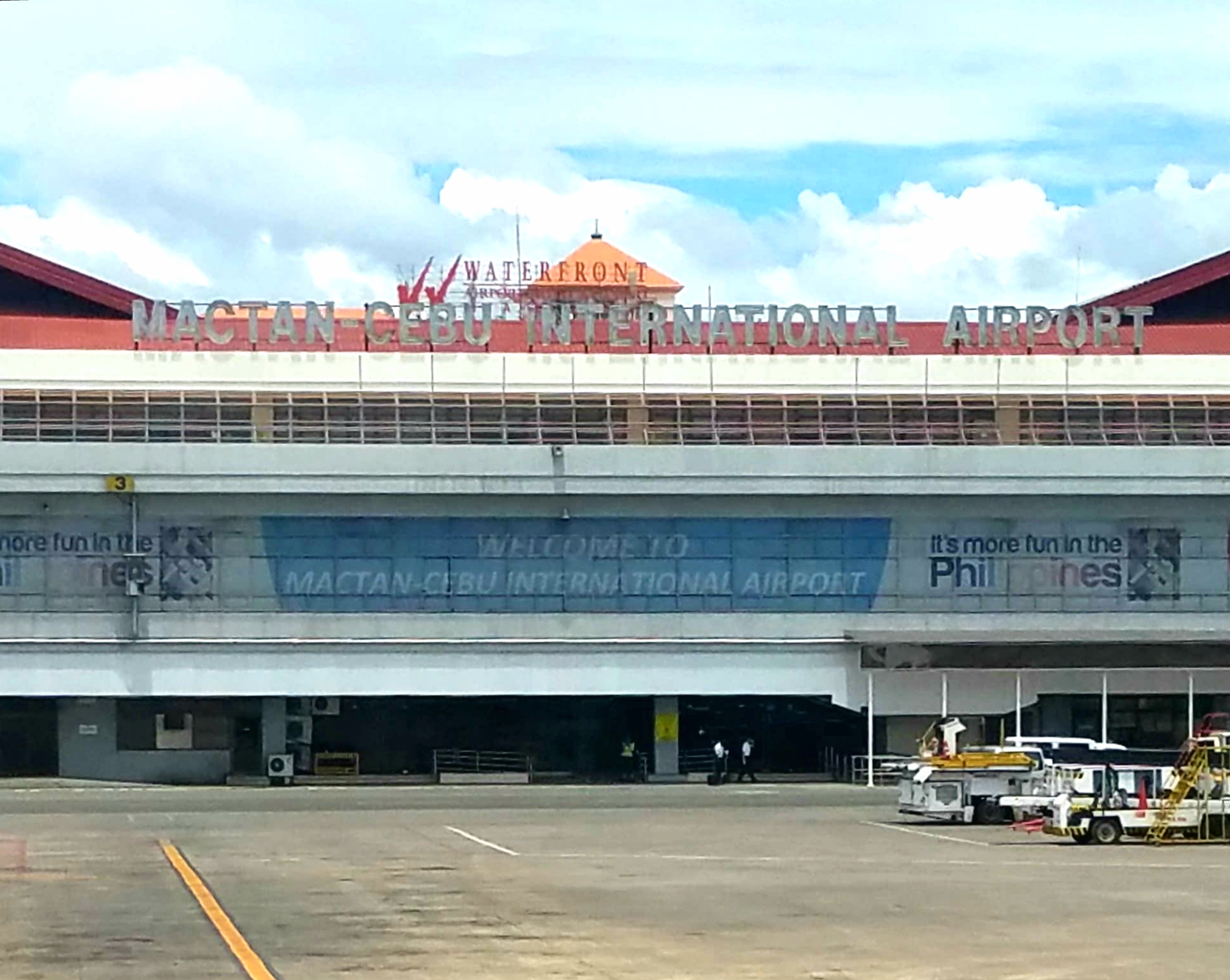 The flight departed from Cebu’s Mactan International Airport. Mactan is a small island that abuts the island of Cebu. (History buffs may recall that Mactan is where Ferdinand Magellan was killed on April 27, 1521 during his attempt to be the first to circle the globe. Magellan died while fighting enemies of a tribe he had just converted to Christianity. After Magellan’s death, his slave, Enrique, escaped. Enrique grew up on islands close to the Philippines. Assuming that Enrique made his escape to return home, an Asian slave was the first person to circumnavigate the Earth.)

As a business class passenger and Priority Pass member I enjoyed a complimentary light repast in the very comfortable Plaza Premium lounge before boarding. 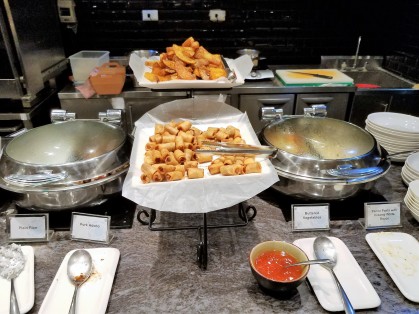 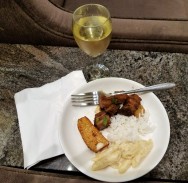 The A321-200 is the only single-aisle aircraft type EVA Air operates. There are eight seats in business class and 176 seats in economy. Business class seats are 21 inches wide and have 45 inches of space between rows. My seat was 2H, an aisle seat in the second row.

There is plenty of legroom although compartments for the entertainment system occupy a lot of space under the seats. 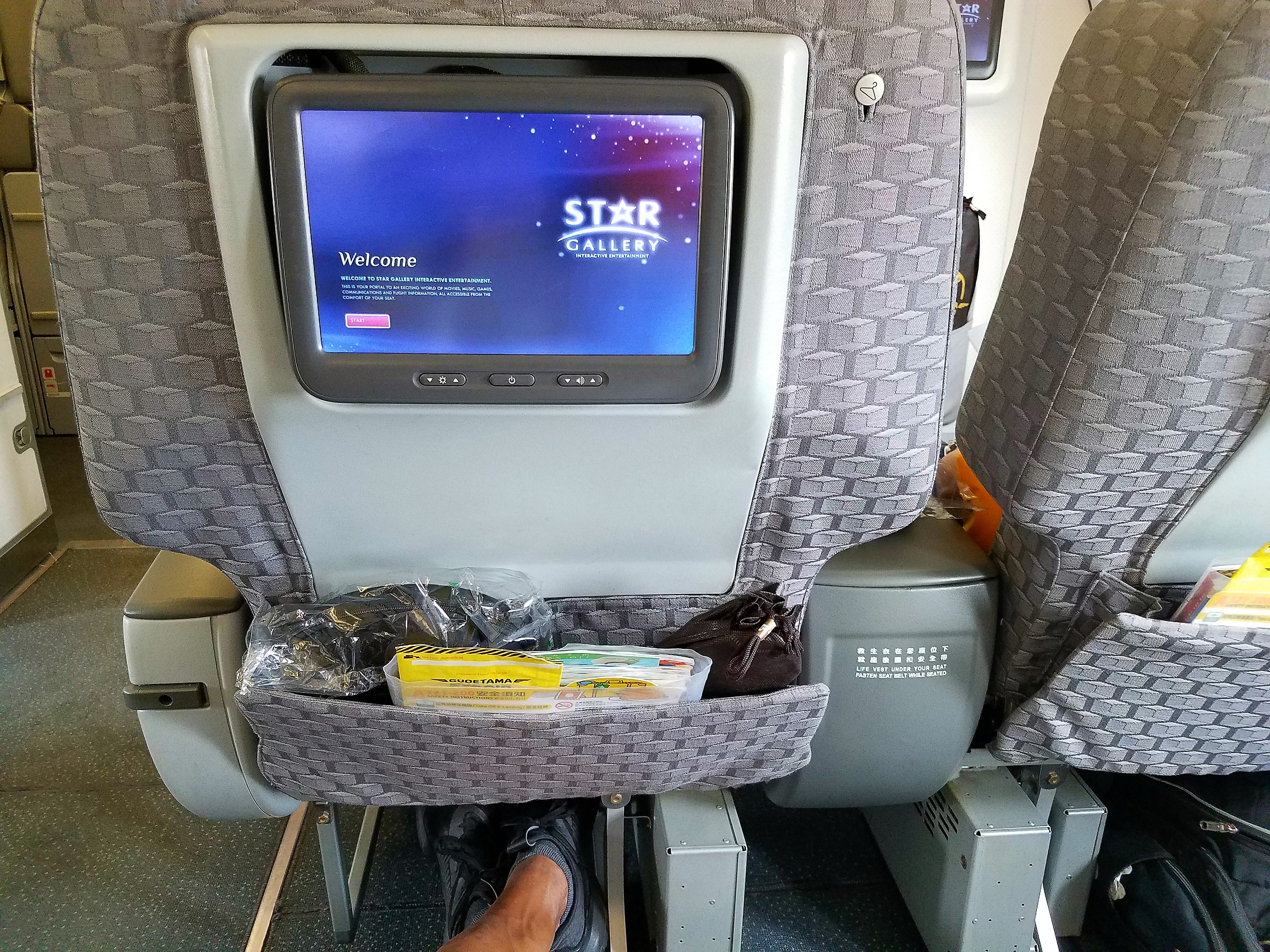 Seats have large adjustable headrests. The seat reclines about six inches and there is a leg and foot rest. Seat controls are within easy reach.

A/C power outlets are between the seats near the floor but still easy to access. 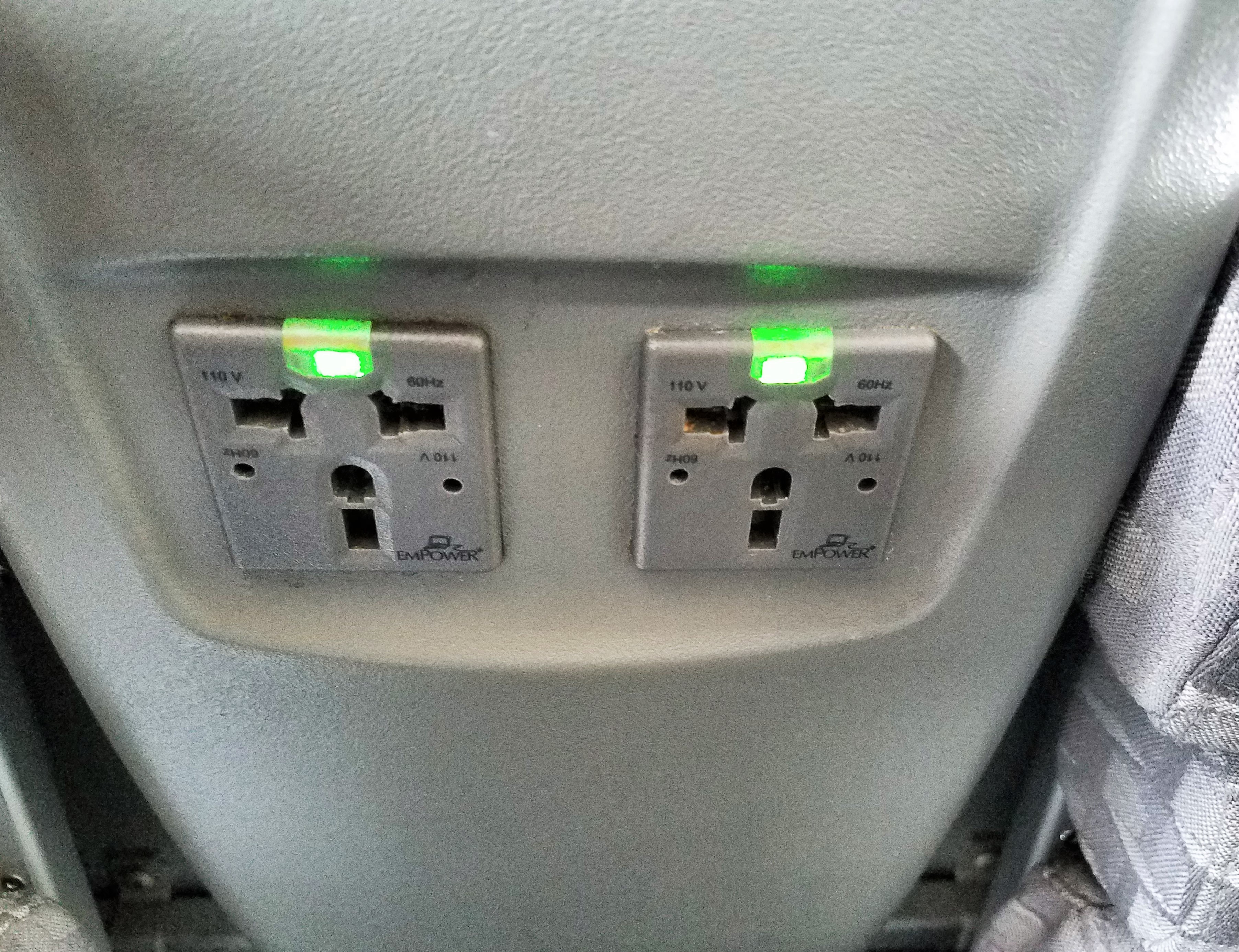 The remote control for the in-flight entertainment is mounted on the armrest between the seats.

A blanket, pillow and menus were on each business seat at boarding. Slippers and noise-cancelling headsets were in the seatback pocket. 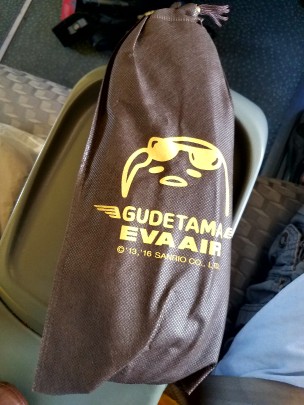 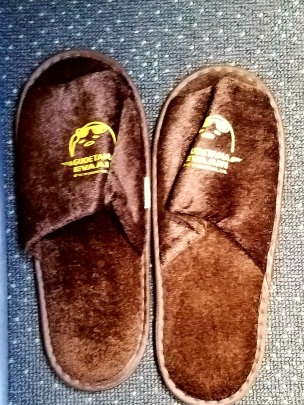 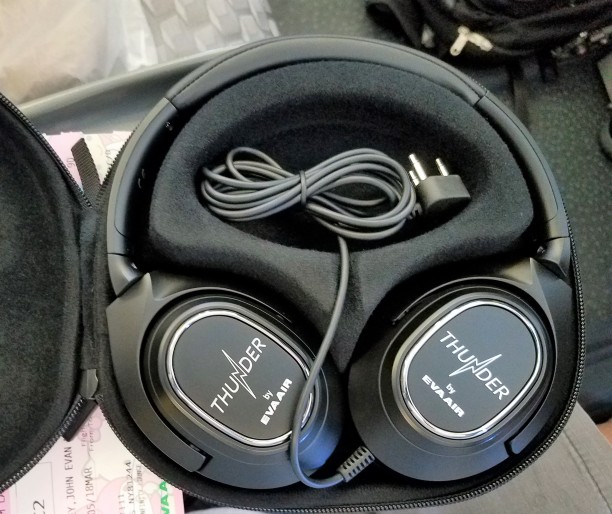 Right after boarding was complete, the head flight attendant introduced herself to each of the three passengers in business class and took orders for drinks and lunch. Pre-departure beverages consisted of choice of fruit juice or water (plain or carbonated) served with a cool, moist towelette.

Pushback from the gate was at 11:25 (15 minutes late). Takeoff off on Runway 04 at 11:35 was over the pristine waters of the Cebu Strait. About 70 miles down the coast in Oslob is where I swam with whale sharks. 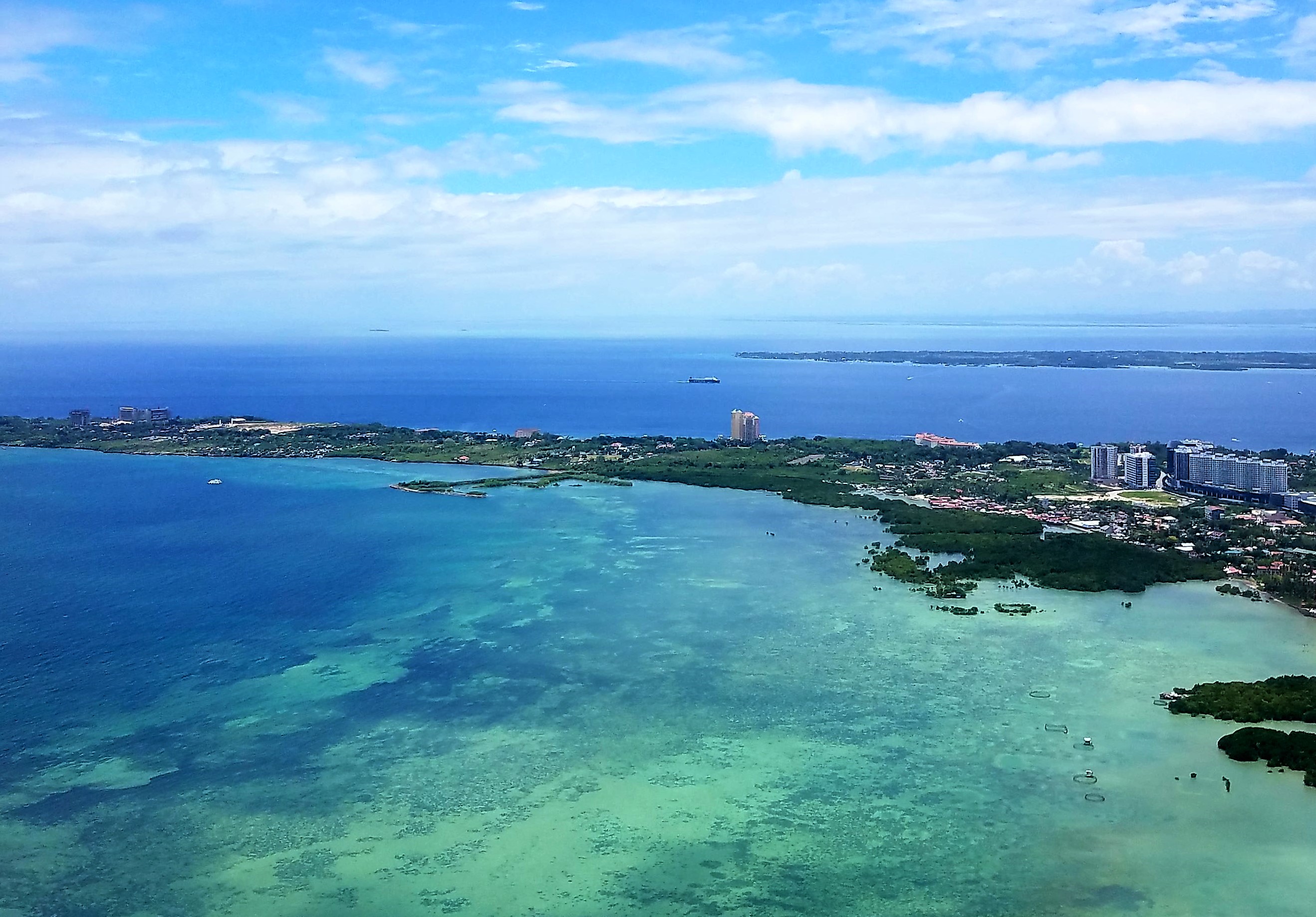 The flight distance is just over 1,000 miles.  We assumed a northwest heading to Taipei.

EVA Air’s seat and amenities are great, but where this airline distinguishes itself is the service on a narrowbody plane.

Lunch began at 12:00 with linen for the trayy table and drinks.

EVA Air offers a large selection of wine, champagne and premium spirits as well as soft drinks, tea and coffee. The wide selection of food and beverages is impressive especially considering that business class on this plane must often have less than four passengers. Here are the beverage menus in slideshow format. 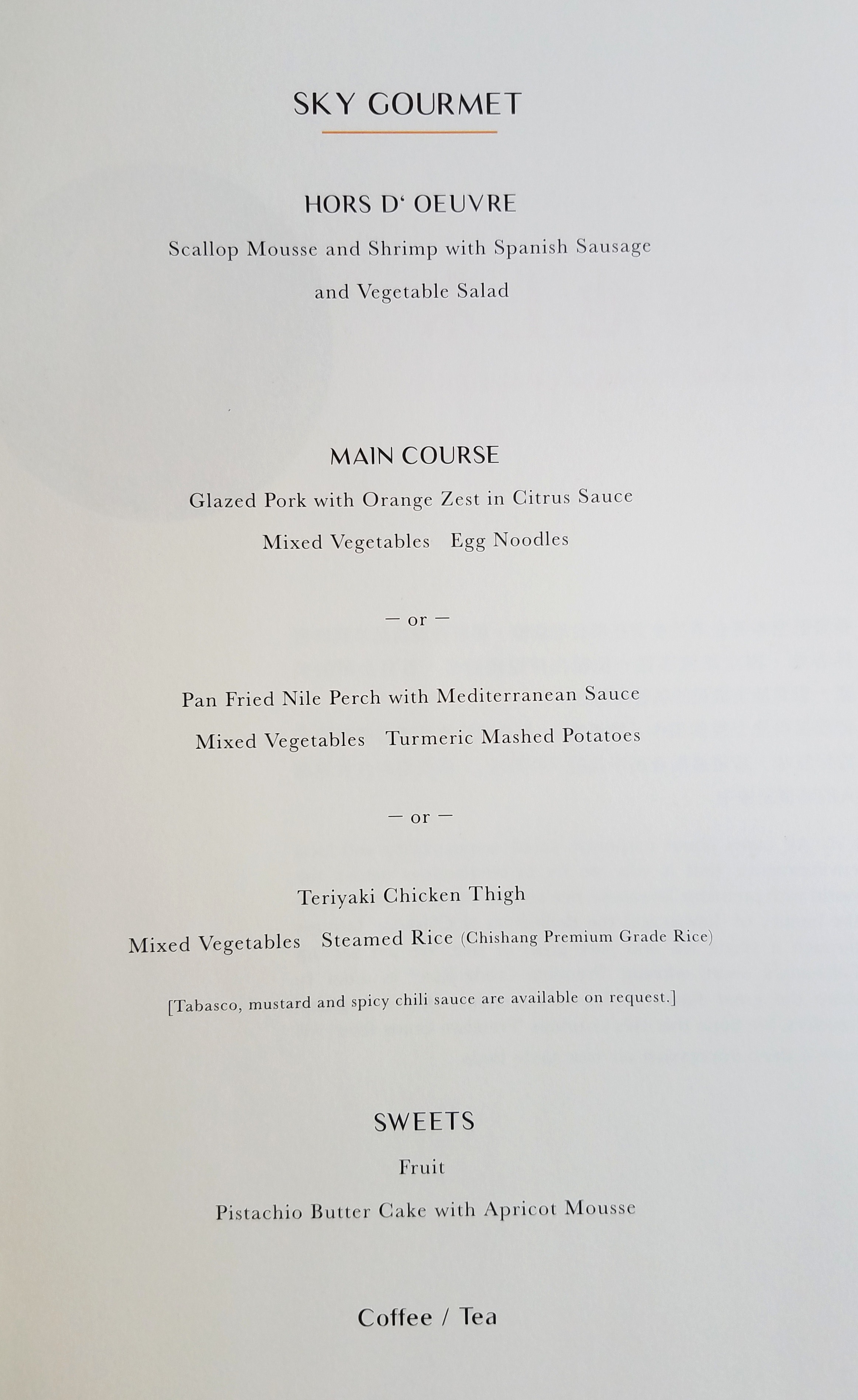 I selected Nile Perch with turmeric mashed potatoes and mixed vegetables. Beverages were scotch and a white wine. The main course was preceded by scallop mousse and shrimp with Spanish sausage. Dessert was fruit and pistachio butter cake with apricot mousse. 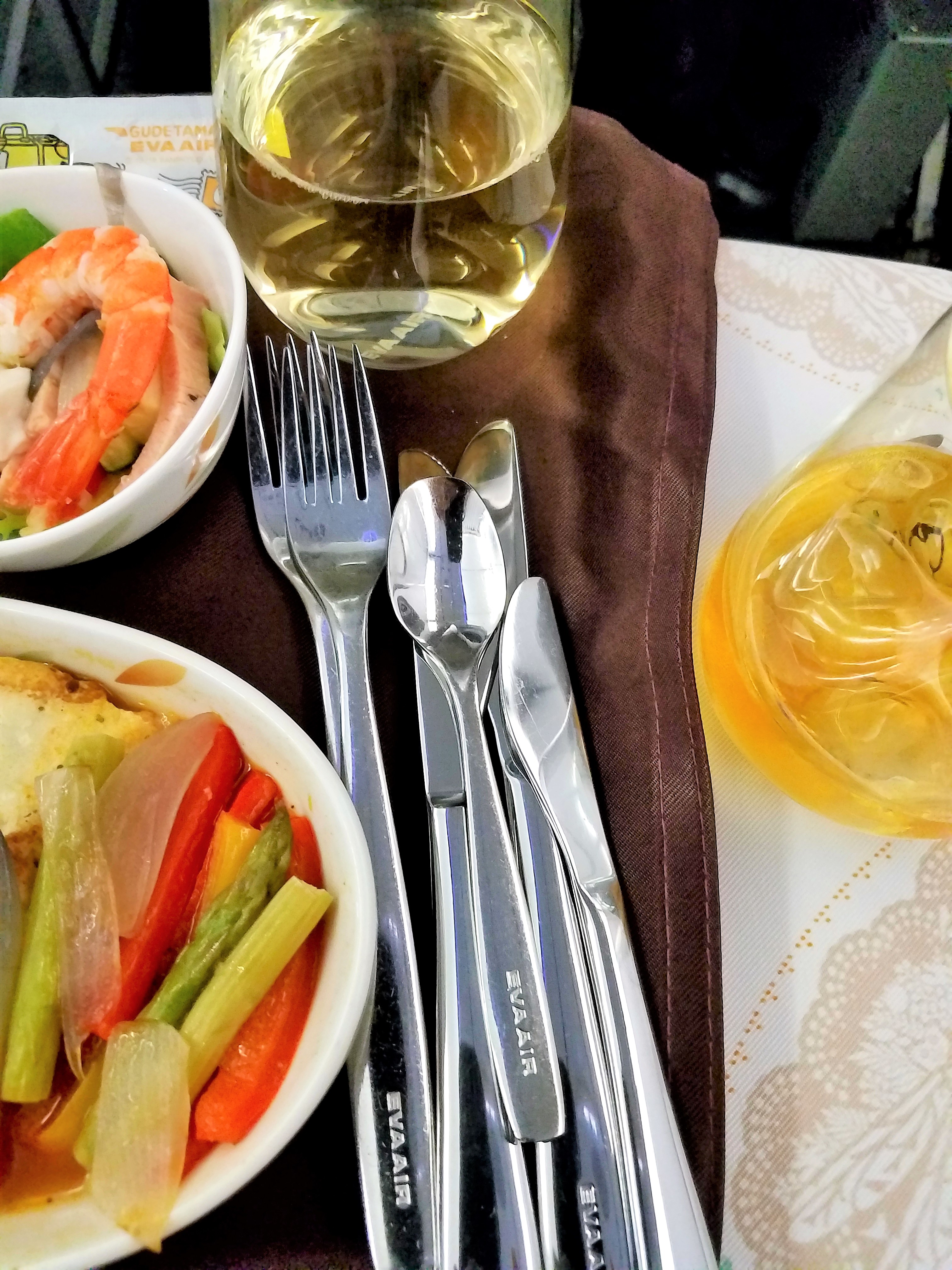 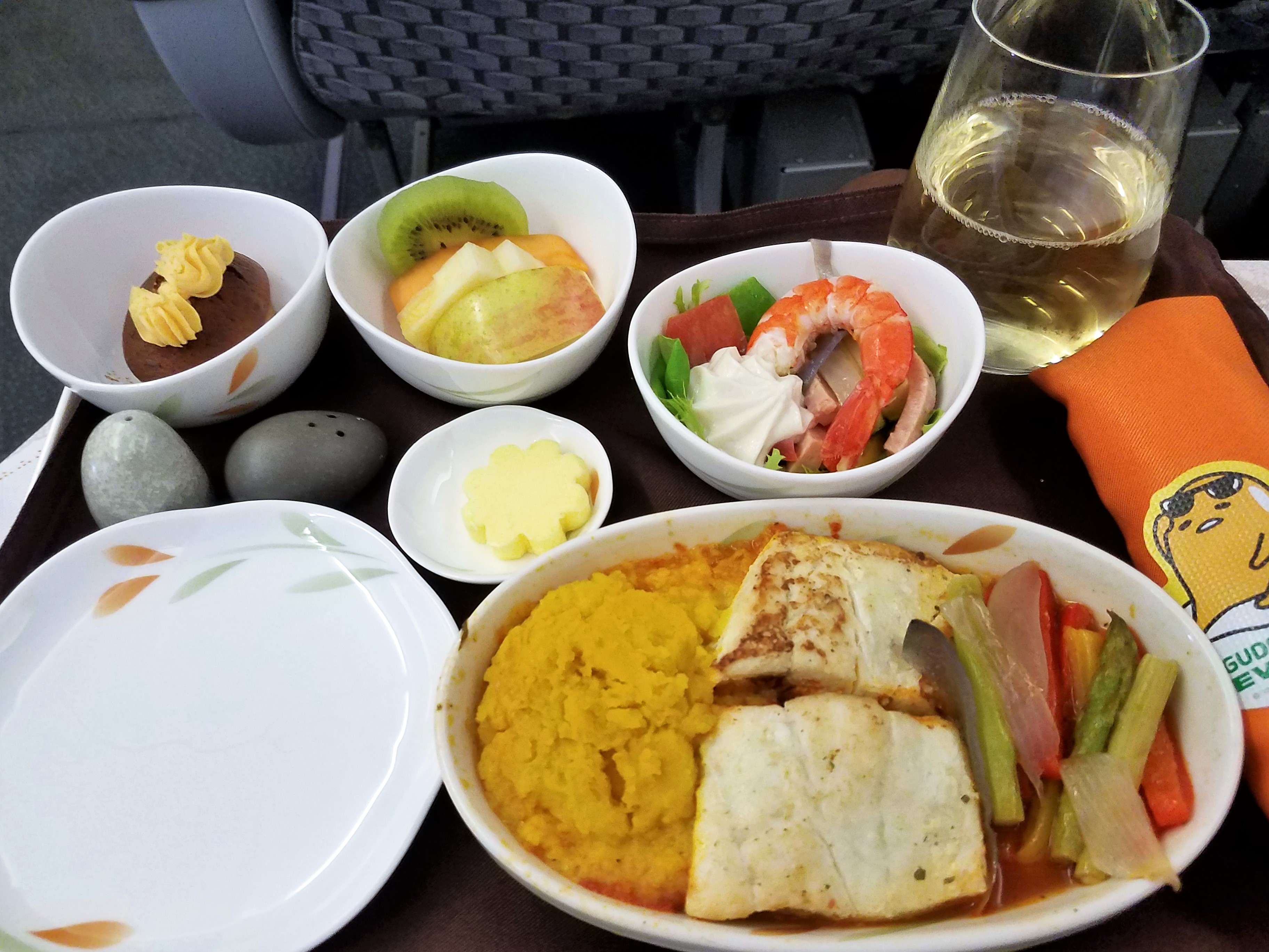 Everything was delicious, and the flight attendants served the meal perfectly. If we could only get meals like that on 1,000 mile flights in the U.S.

EVA Air’s IFE system is as impressive as the service. Movies from Hollywood were more current than movies that were available on the flights on American Airlines at the time.

I started watching Detroit but didn’t finish before landing.

EVA Air IFE has good flight following and a heads-up display from the flight deck. 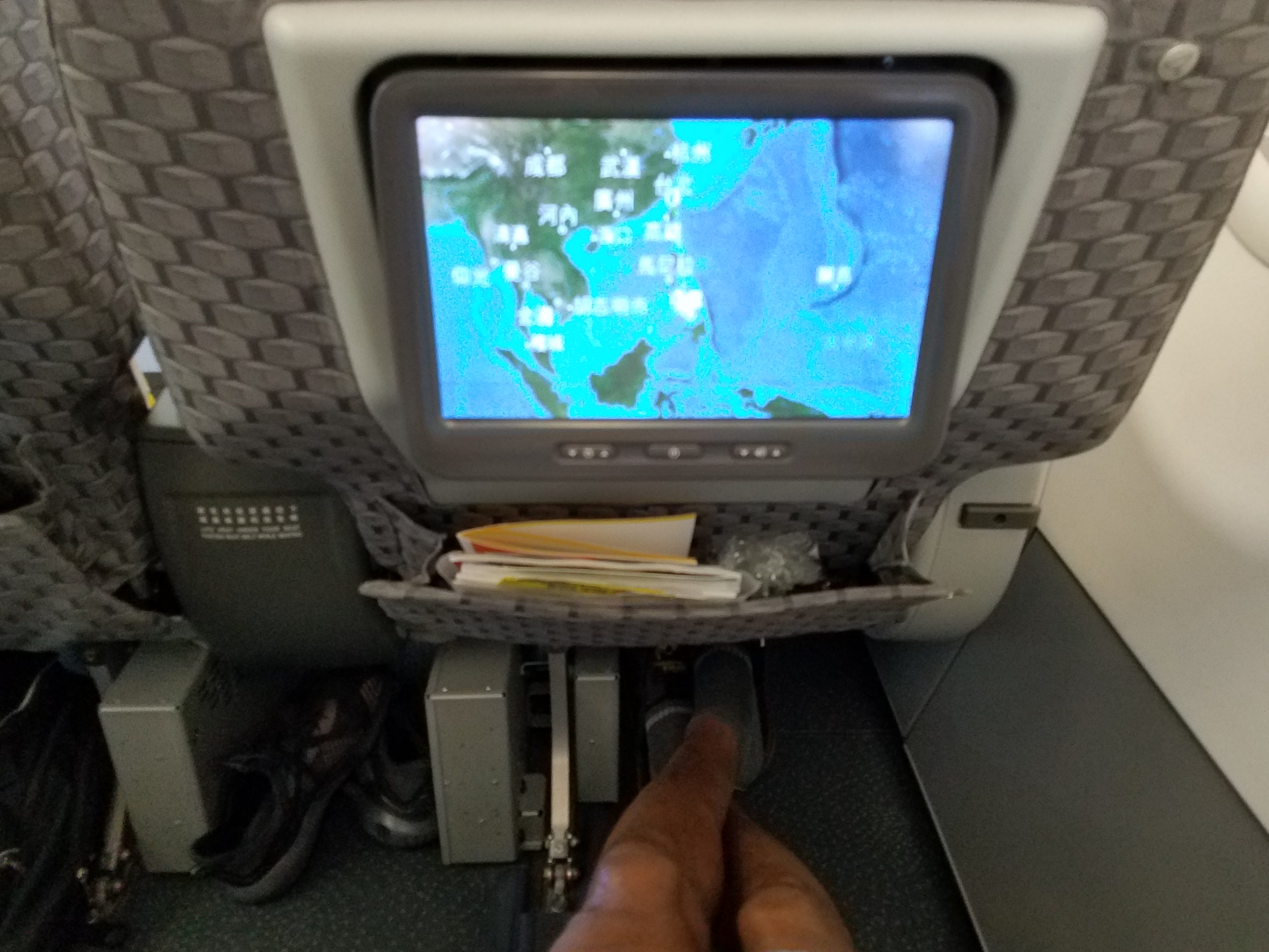 Business class has one lavatory near the flight deck.  It is a standard A321 bathroom, but EVA air adds lotion, facial mist and cologne since there is no amenity kit on short flights. 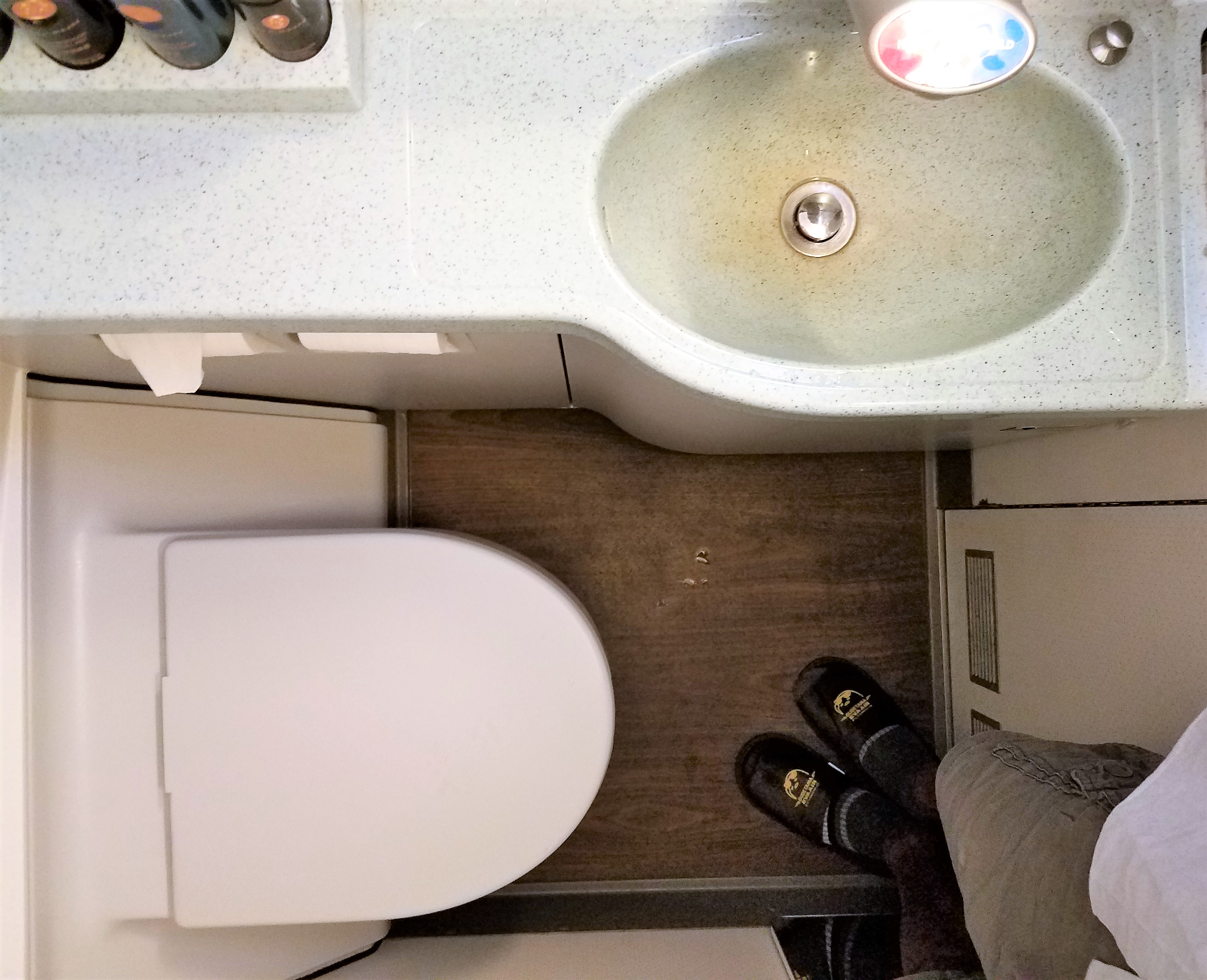 As  we approached TPE, I was able to check my connecting flight to Bangkok on the IFE system. 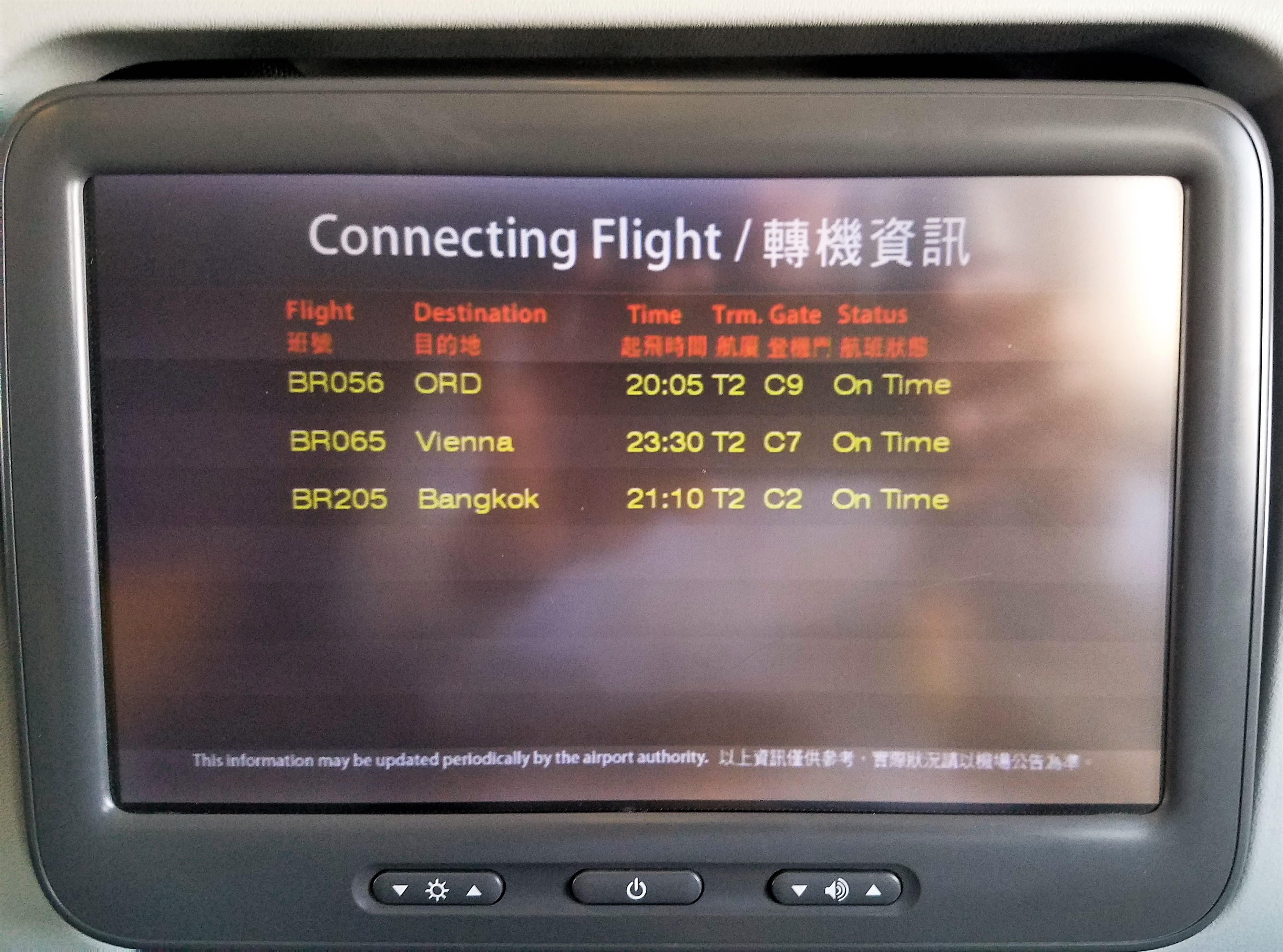 I had a few hours to kill.  No problem.  I would spend that time relaxing and working in one of EVA Air’s business class lounges at TPE.

On the way to the gate we passed a 747-8 flown by Taiwan-based China Airlines.  The 747-8 is the latest and last model of the 747.  There are still a few of these beauties in the fleets of several airlines.  I experienced a wonderful flight on a Korean Air 747-8 last year. 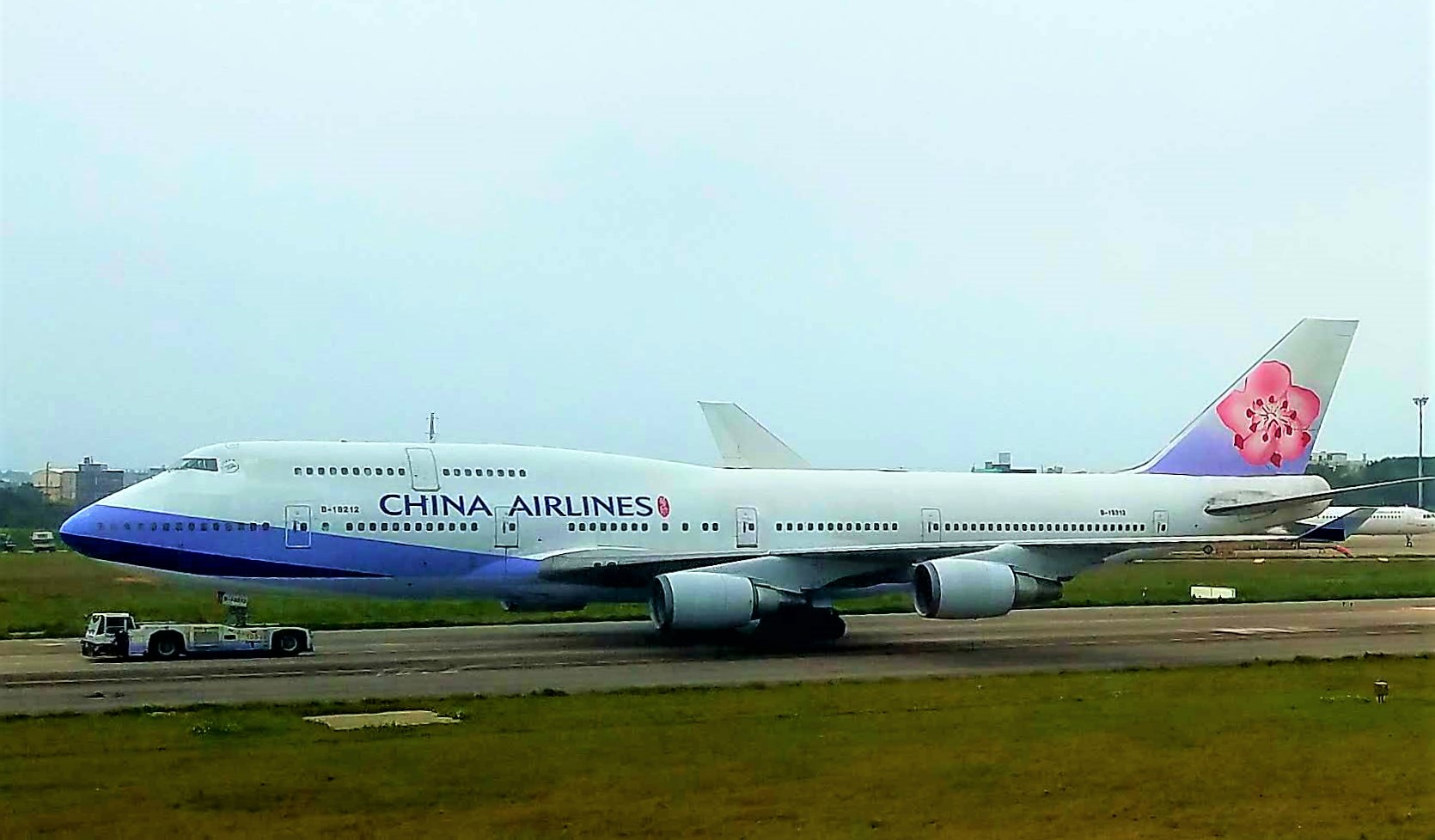 This was my first flight on EVA Air.  I’d heard good things about this airline primarily concerning long-haul international flights on widebody aircraft.  For various reasons, airlines don’t or can’t provide the same level of service  on narrowbody planes.  This experience in business class on EVA Air’s A321 short/medium haul flight was much better than what is provided on comparable flights on the U.S. Big 3 airlines and nearly matched the service on a widebody.  It confirmed EVA Air’s reputation as one of the leading airlines in the world.