Warsaw, Poland lies on the Vistula River, about 240 miles (386 km) southeast of Gdańsk on the Baltic. It is situated in the middle of the Warsaw Plain. The city extends roughly 18 miles from north to south and 16 miles from east to west. The population of the metropolitan area is about 3.1 million. Warsaw has been the capital of Poland since the 16th century.

Here are photos of several areas in Warsaw from my first visit in November 2011.

Old Town and the Barbican are the oldest parts of Warsaw.  The Barbican is a fortified outpost that guarded the city.  It was erected in 1540 and now sits between the Old and New Towns.

Old Town dates from Warsaw’s founding in the 13h century.  It remained the heart of the city until the 1800s.  In 1980, Old Town was designated as a UNESCO World Heritage site.

German forces completely destroyed Warsaw during their occupation in WWII.  All of these buildings were reconstructed in the post war period.

In July 1944, the Soviet Army had thrown back the Nazis and was preparing an assault on Warsaw. Knowing that Stalin wanted to replace the Germans and prevent an independent Poland, the Polish government-in-exile in London gave orders to the Polish underground to try to seize control of Warsaw before the Red Army arrived. On August 1, 1944, the Warsaw uprising began.  The battle against the Germans went on for 63 days before the fighters and civilians were forced to surrender.

In retaliation, Hitler ordered the entire city to be razed to the ground and any valuable items such as libraries, museums, and private collections taken to Germany or burned.  Monuments, government buildings and infrastructure were blown up.  About 85% of the city was destroyed. The remaining portions survived only because they were deemed essential for the continuing occupation.

When the Germans invaded Poland in September 1939, the more than 400,000 Jews who lived in Warsaw were confined to an area of the city that was little more than 1 square mile. In 1942, SS chief Himmler began sending them to concentration camps. By April 1943 the Jewish population had been reduced to about 55,000. That month several hundred Jewish resistance fighters, armed with a small cache of weapons, began a revolt against the Germans who far outnumbered them in manpower and weaponry.

The revolt lasted nearly a month. During that time, the Germans used tanks and heavy artillery to systematically raze the ghetto, block by block. An estimated 7,000 Jews perished during the Warsaw ghetto uprising. The surviving population was sent to extermination or labor camps.

All that remains is a wall at the perimeter of the ghetto.

The POLIN Museum of the History of Polish Jews sits on a portion of the area of the Jewish Ghetto. When I visited in 2011, the museum was under construction.

The POLIN museum opened in 2014. The exterior design is striking.

Lazienki Park and palace complex is the largest park in Warsaw. The name Łazienki means baths and is derived from the park’s centrepiece and best-known attraction, the Palace on the Island. 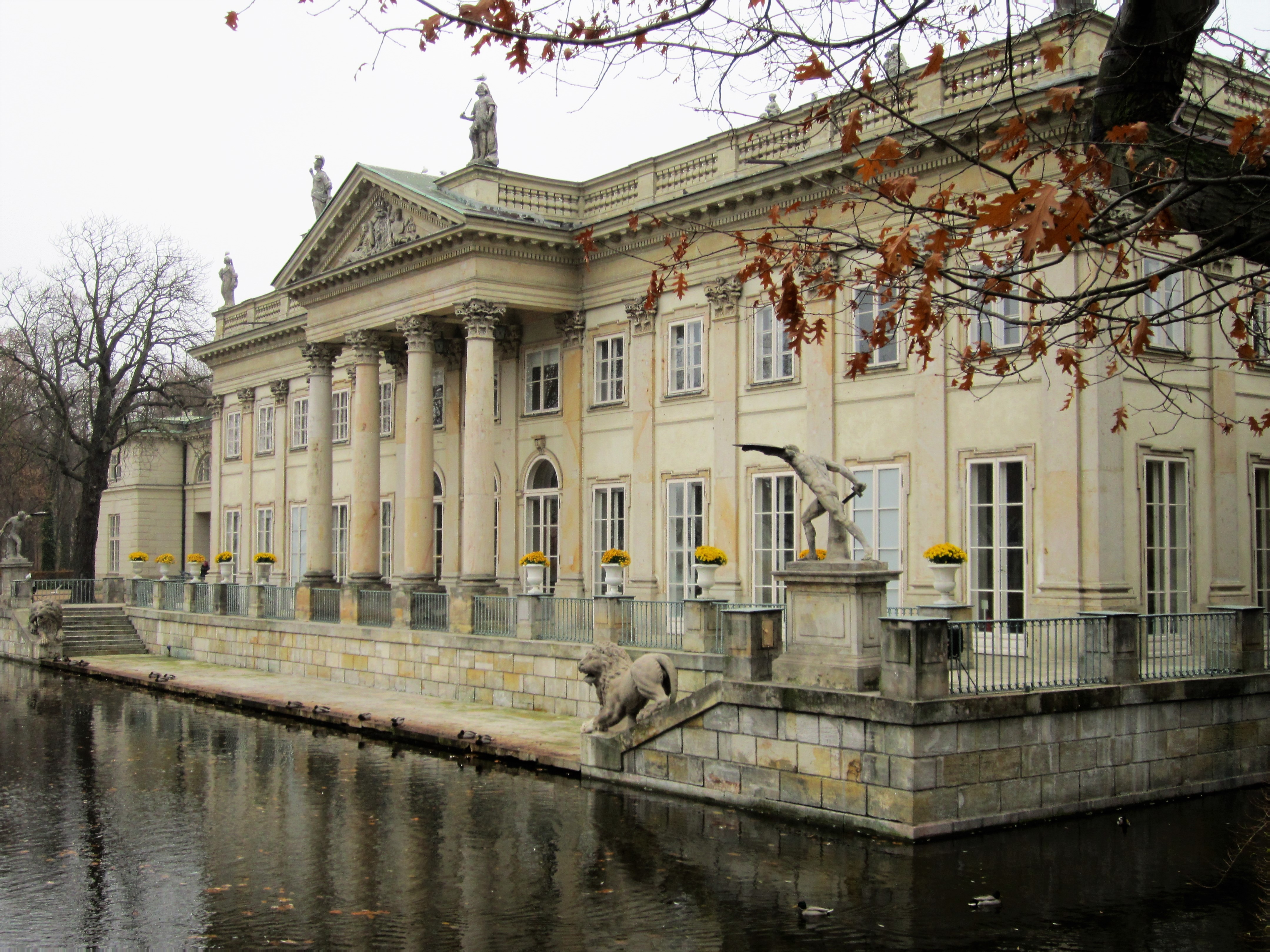 The palace was originally built in the 17th century as a private bathhouse for Stanisław Herakliusz Lubomirski, owner of the adjacent Ujazdowski Castle and much of the surrounding land. The bathhouse was bought by the last king of Poland, Stanisław August Poniatowski, in 1772 and converted into a private residence. 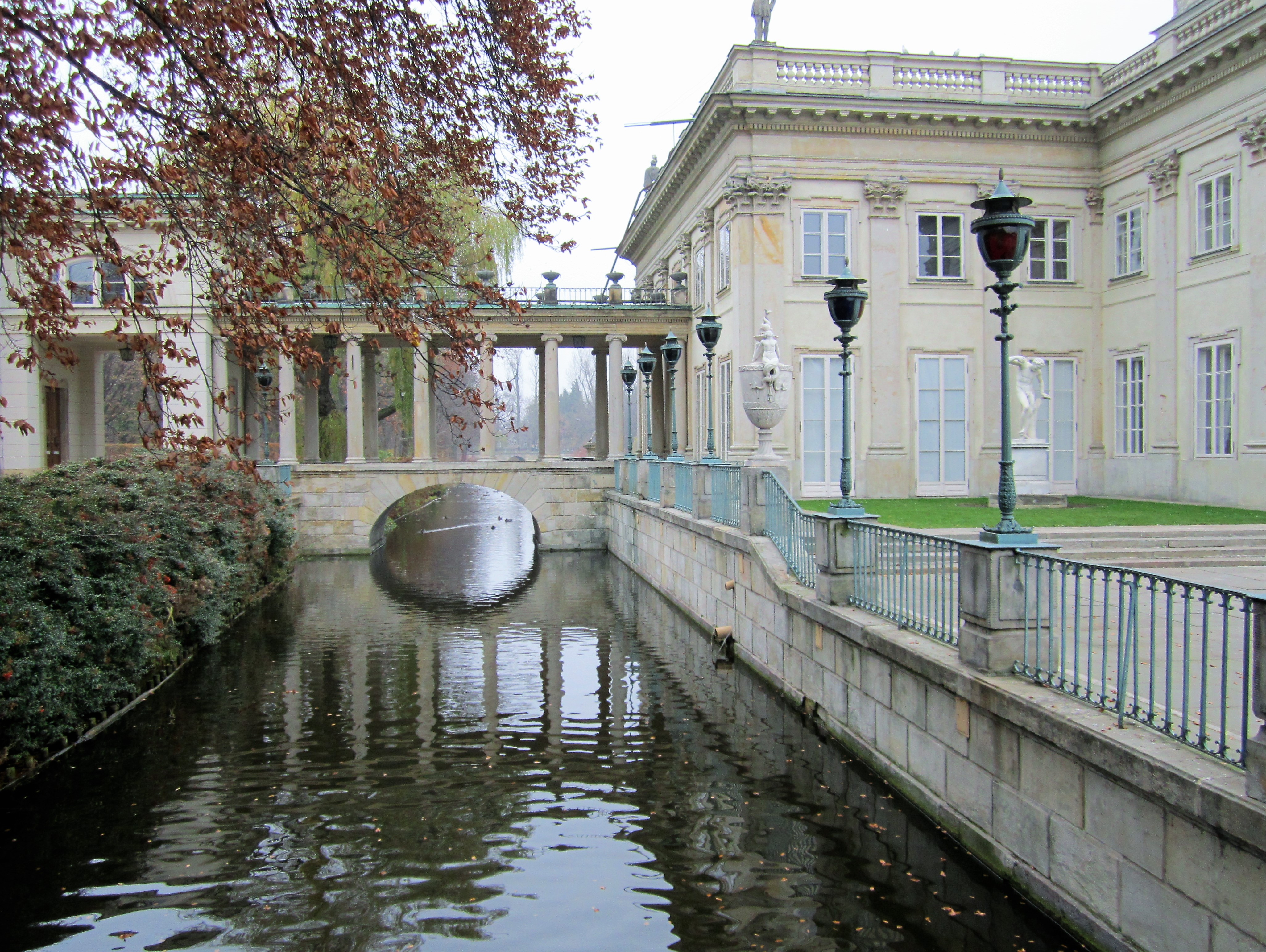 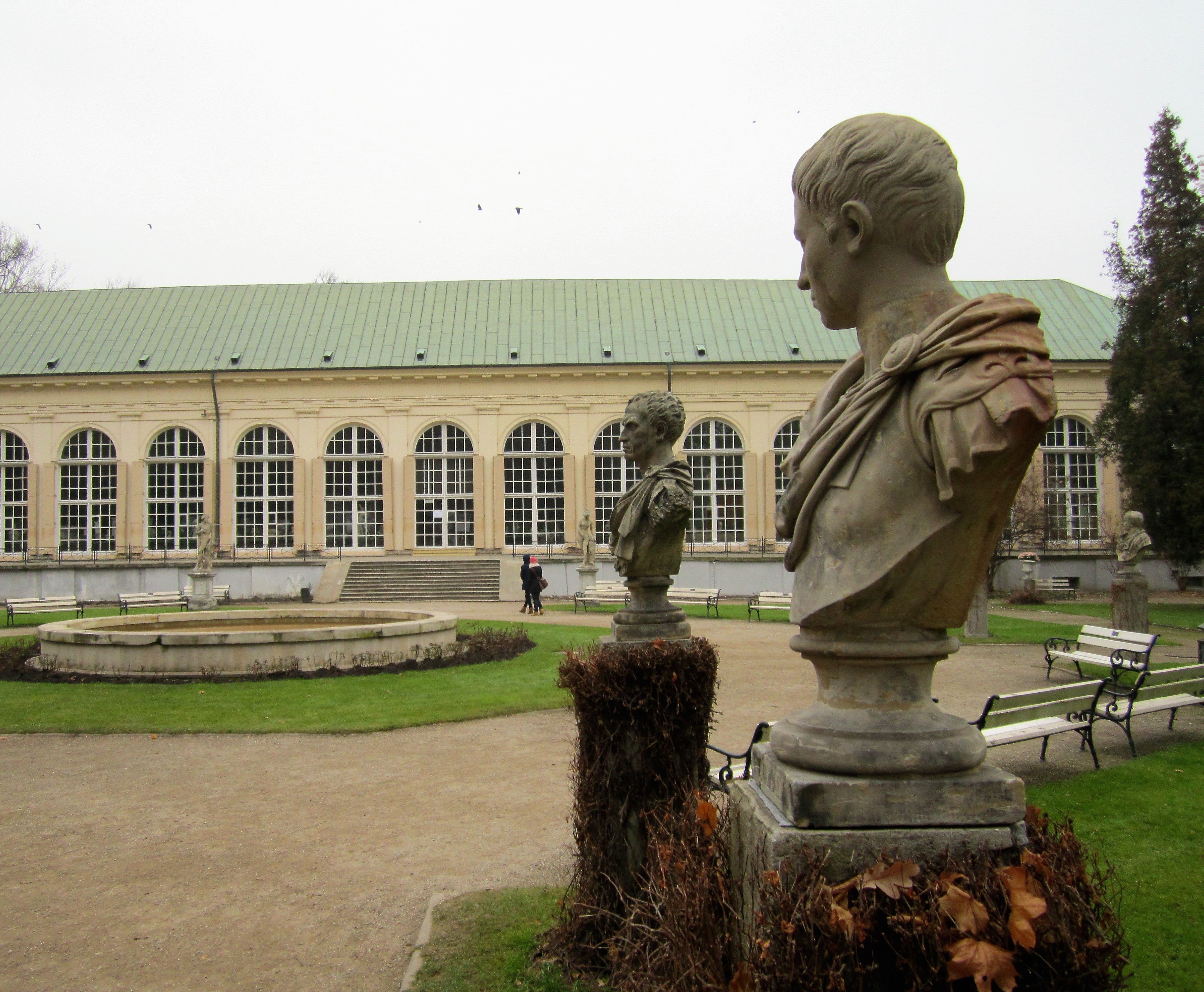 A most notable and, in my view, slightly strange feature is the monument to Fryderyk Chopin that was created in 1926.

Chopin was born in Poland and lived in Warsaw until the age of 20.

A Few Of The Sights On The Royal Route

The Royal Route is a series of connecting streets leading southward from the Old Town that features a number of historic landmarks.

The Presidential Palace is the official residence of the Polish president who is the official head of state. Originally constructed in 1643 as an aristocratic mansion, it has been remodelled several times over the course of its existence. The palace was completed in 1818. 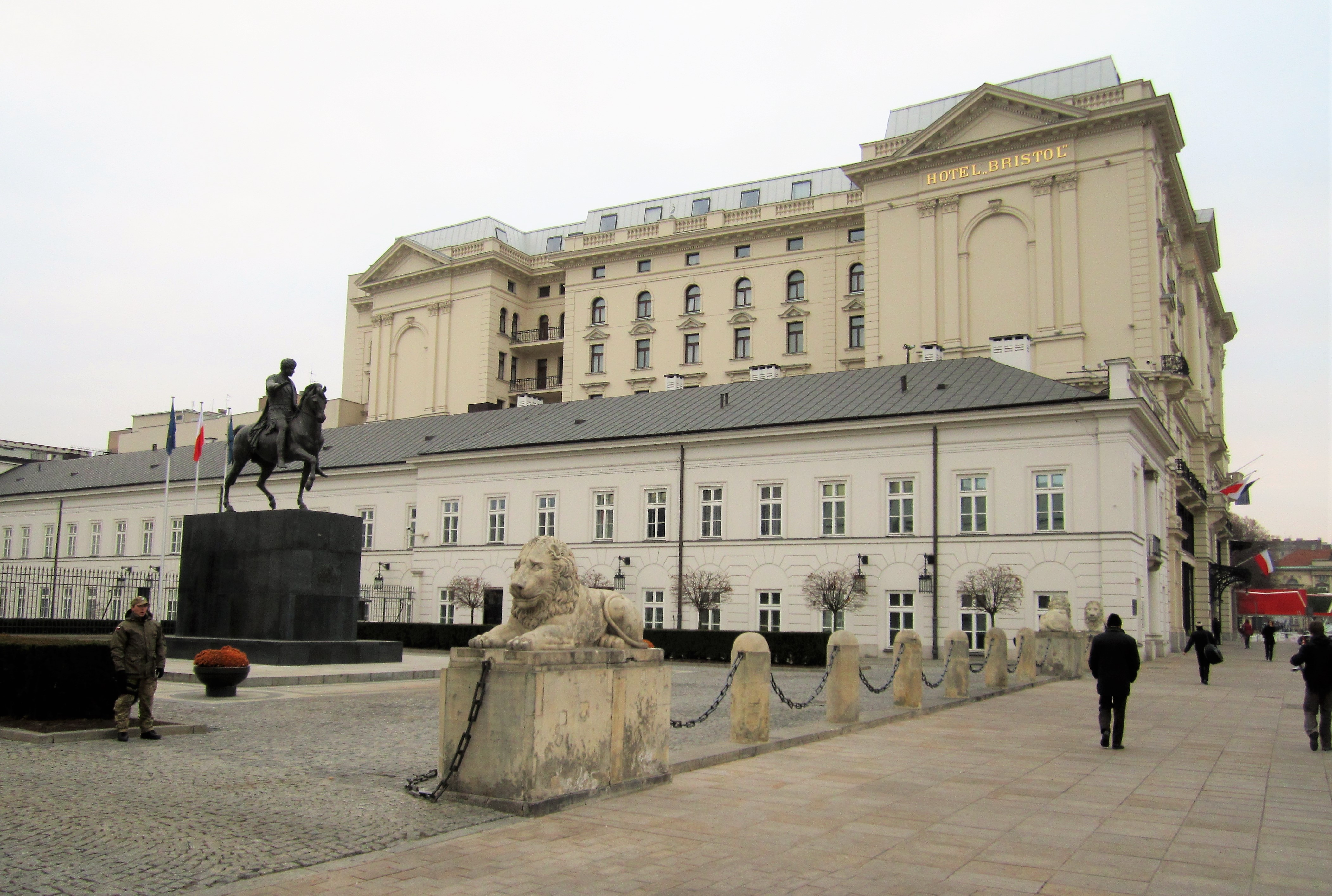 The Presidential Palace offers free tours that must be arranged in advance. It is located next to the Hotel Bristol where I stayed on this trip.

Hotel Bristol was constructed from 1899-1900. After Poland gained its independence in 1919, pianist Jan Paderewski became the Prime Minister and held the first session of his government in this hotel.

Hotels in Warsaw are inexpensive for a European capital but Hotel Bristol, at the time Starwood Luxury Collection hotel now part of Marriott, is one of the more costly ones. It is indeed a fabulous hotel. I think I probably used points or free-night certificates for my stay.

Because occupying German forces were using the Presidential Palace and Hotel Bristol for their senior officers and staff both buildings were spared from the city-wide devastation of the German hissy fit following the Warsaw Uprising in WWII.

Church of the Assumption of the Virgin Mary and of St. Joseph (the Carmelite Church) was finished in 1701. It was the site of Chopin’s first employment. He gave organ recitals here as a boy. 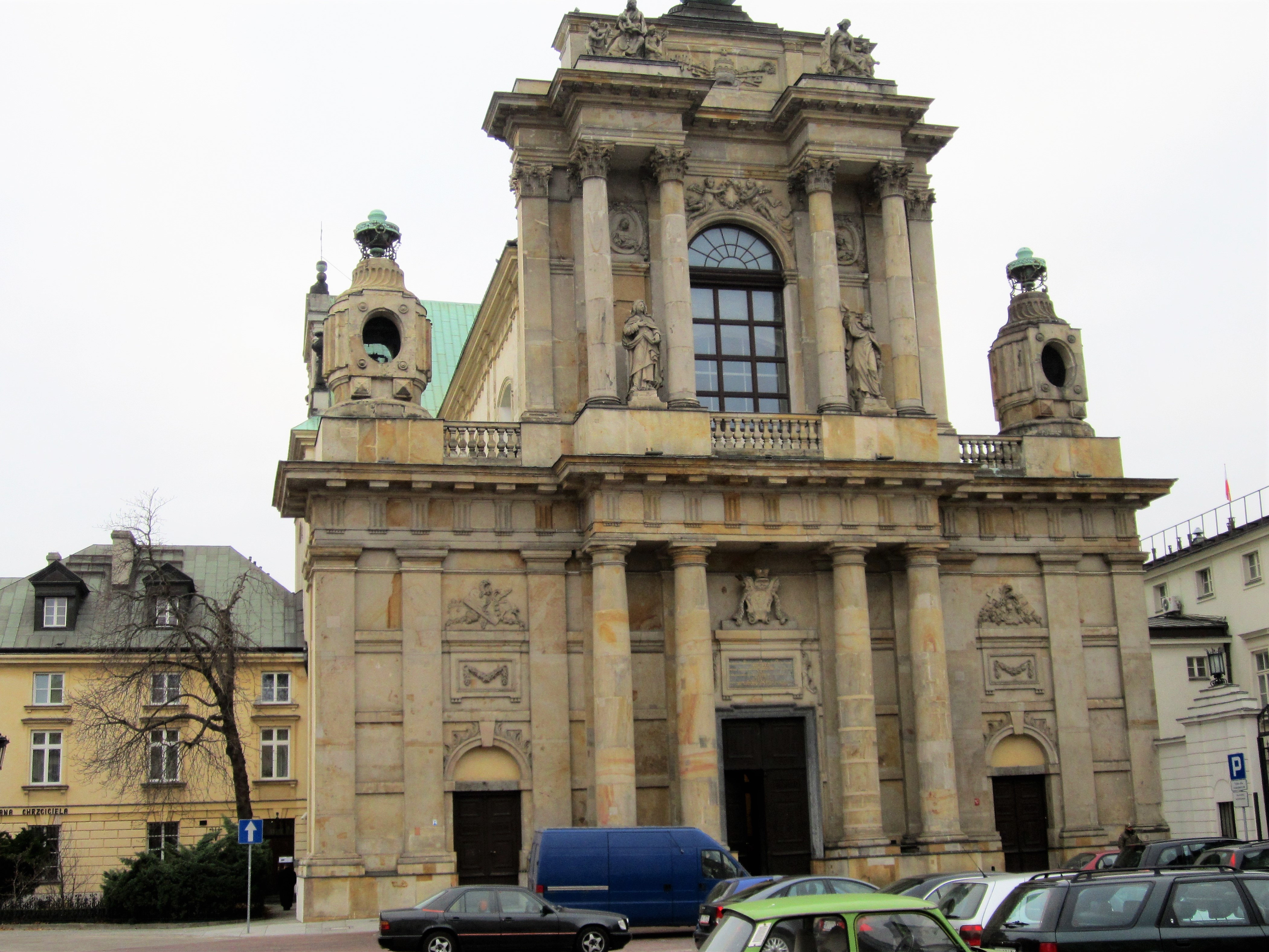 Church of Saint Joseph of the Visitationists (Visitationist Church) was completed in 1761. Like the Carmelite Church, Chopin played the organ here during services mostly for children.

A statue of Cardinal Stefan Wyszyński, primate of Poland from 1948 to 1981, has been erected in front of this church. 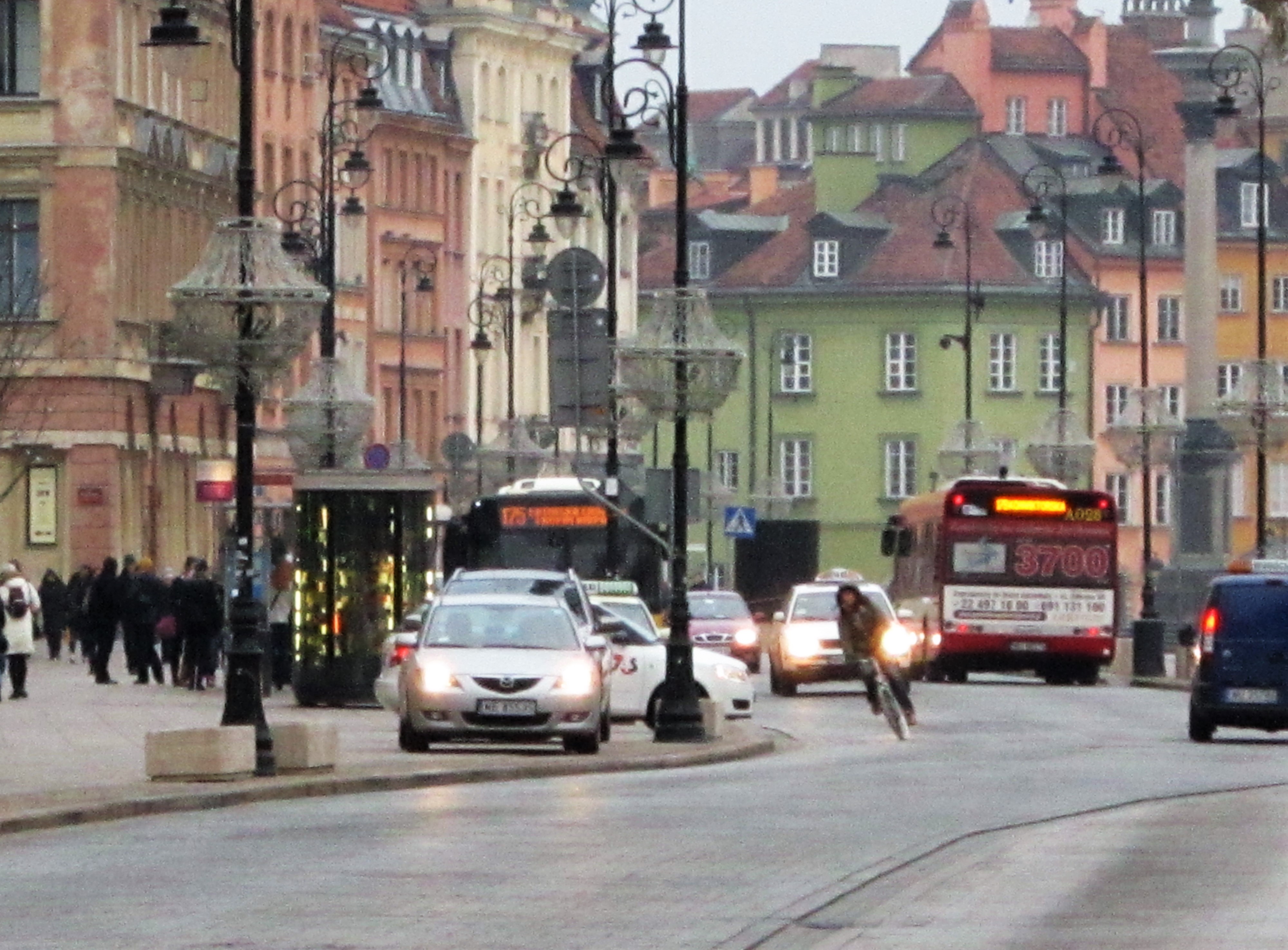 Last, is a photo of Herbert Hoover Street in Warsaw. I later learned that Hoover paid Warsaw several visits. This street was named to honor his work heading up the American Relief Administration (ARA).

The ARA was the WWI version of the Marshall Plan that helped Europe recover from WWII. Hoover was very instrumental in organizing efforts that led to feeding as many as 1.5 million Polish children daily massive shipments of clothing, shoes, and medical supplies. I guess Hoover had some accomplishments to be proud of.

I found Warsaw to be a lovely city by and large. People were friendly and there was little trouble communicating. Warsaw has done an incredible job of recovering from the senseless genocide and leveling of the city by the nazis in WWII. While not quite as beautiful as Krakow, Poland, I think Warsaw’s architecture and ambiance deserves a better reputation than what I had been led to believe. My only regret is that there was never any sun during this visit. But that’s kind of par for the course in many places in Europe in November.

Have you been to Warsaw? What did you think of the city?

28 thoughts on “A Look At Warsaw, Poland”