After passing through security and passport control at Bangkok’s Suvarnabhumi International Airport (BKK), this impressive and intriguing sculpture greets passengers as they enter the concourse. I always wonder what the sculpture represents but am usually too involved with other travel concerns to give it the attention it deserves.

For this Sculpture Saturday post I finally took time to investigate. This sculpture depicts a famous scene from Hindu literature, Samudra Manthan (the churning of the milk ocean). 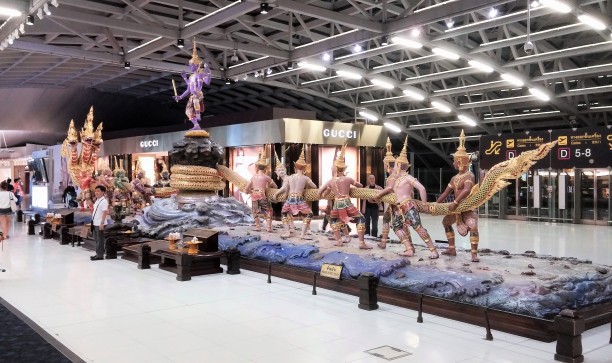 This sculpture depicts Samudra Manthan (the churning of the milk ocean).

In short, The Churning of the Ocean of Milk relates the story of the Asuras and Devas, Celestial Beings, who cooperated to churn the sea for thousands of years in order to extract the elixir of immortality, coveted by both groups.

The Devas and Asuras are engaged in a tug of war. Each team is holding onto one end of the king of serpent – Vasuki (or Naga). The center of the serpent is coiled around Mt. Mandara and at the base of this pivot would be Vishnu, incarnated as a huge turtle.

As the ocean churned, a deadly poison known as halahala emerged. Shiva drank this poison and his wife stopped it in his throat with her hands, causing the throat to turn blue. (explaining why Shiva is sometimes called Nīlakantha meaning Blue Throat). From the churning, numerous opulent things were also produced including Dhanvantari (Heavenly Physician) carrying the pot of Amrita – the heavenly nectar of immortality.

In the end, the cooperation between Devas and Asuras was shattered with Vishnu taking the form of Mohini — a beautiful and enchanting damsel who served to distract the Asuras while distributing the nectar to the Devas. The clever Devas having fulfilled their plan of acquiring all the Amrita banished the Asuras out of Heaven and into the underworld.

This story is celebrated in a major way every twelve years in the festival known as Kumbha Mela.

I hope you enjoyed the tale of Samudra Manthan. I’m glad I now know a bit about what the sculpture represents.