Getting vaccinated against Covid-19 disease is a requirement I insist on before I travel again. Its also just a good idea for staying healthy, period. Today, I was fortunate to receive the first dose of the Pfizer-BioNTech Covid-19 vaccine. The whole experience from getting the appointment to the jab in the arm was surprisingly easy, fast and, believe it or not, fun. After seeing many horror stories on TV and in print about the difficulty of getting a vaccine, I’m feeling a little bit guilty about it.

To match an earlier recommendation by the CDC, on January 14, my home state of North Carolina changed the eligibility criteria for vaccination to anyone over 65. I found out about the change on January 18 and created an account online with the county health department in an attempt to get an appointment to be vaccinated. That effort yielded no available dates. I called the county for more information and was told to check back as appointments might open up.

I called again on January 21 after once again checking the website. The agent confirmed no available appointments but said that in addition to the county, Atrium Health and another local health system were also vaccinating people who were patients in their systems. I called Atrium Health’s Covid vaccine number the same day.

I quickly got through to an agent. After a few qualifying questions about age and health status and confirming that I had been a patient with Atrium (a steroid shot for a rotator cuff issue last year did the trick) she said appointments were available. I asked for the first available date rather than the closest location. She set my appointment for the first dose on January 24 (three days after the call) and scheduled the second dose on February 14!

I received text messages confirming the date, time and location of both appointments. As they say in the Staples commercial “That was easy!”

I thought getting an appointment that fast was great. The process of being vaccinated was even better.

I was assigned to the Atrium Health vaccination location at Charlotte Motor Speedway (the NASCAR track) in Concord, NC. It is about a 30-minute drive from my house. As requested when I made the appointments, I arrived only a couple of minutes before the scheduled time at 11:30. Throughout the process there was never any wait, and I never got out of my car.

The first station was outside the track. There a representative verified my name, date of birth, and appointment but didn’t ask for ID. She gave me a packet of materials and said not to fill out the forms (?). The packet included a CDC Prevaccination Checklist, Pfizer-BioNTech factsheet, Covid-19 vaccination information and face mask from Atrium Health, and a CDC Covid-19 Vaccination Record Card.

This info is provided to satisfy informed consent requirements, if any.

That’s when the fun began. Vaccines were administered inside the garages where NASCAR stock cars are serviced. Getting there involved a taking a lap around the track.

Getting to the garage area required driving initially in the opposite direction that race cars go. Having grown up in Indianapolis, IN, I’m more a fan of Indy car (open-wheel racing like F1). One of my first jobs as a young teen was selling Cokes in the stands during the Indy 500 and qualifying. Still, I found it really cool to drive (slowly) on this famous track.

The route was down the backstretch, through turns 2 & 1 and onto the front straightaway.

The way then involved a winding route through the infield to the station where an attendant asked the questions on the Prevaccination Checklist and filled out the form.  There were several lines.  It only took a couple of minutes to complete this part of the process.

The route took me back to the backstretch.  I could have stayed on the apron, the flat part on the inside of the track, but wanted to see what the banking felt like and drove higher entering Turn 3.

The next stop was Pit Lane where each vehicle was issued 5 surgical face masks in addition to the cloth mask in the information packet.

Cars are then directed to turn off Pit Lane and enter the garage area.  Vaccines were being administered in five or six garages.

Again hardly any wait.  I pulled in, and an RN gave me the shot.  From arrival outside the track to when the shot was administered was a mere 11 minutes.

Before leaving the garage, each person receives a CDC Covid-19 Vaccination Record Card that identifies the type of vaccine, lot number, and the date given along with a separate card stating the time the shot was administered.

Cars then proceed to a waiting area for 15 minutes.  An attendant checks the card with the time the shot was given and advises to honk the horn if anyone experiences a reaction or feels ill. 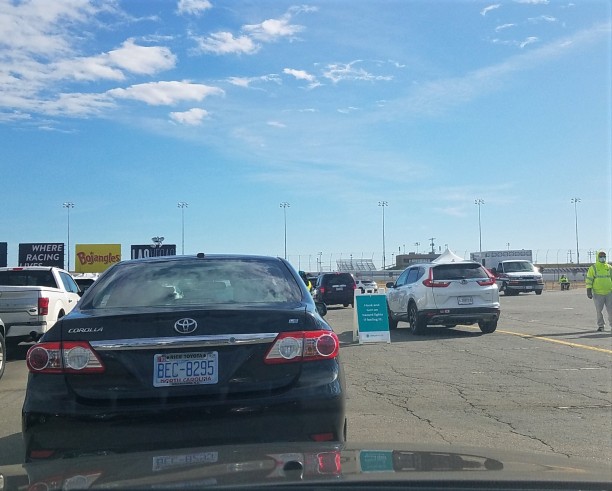 The process was not only fast (less than 30 minutes from arrival at the track to departing the waiting area) but every worker was extremely pleasant.  I saw no issues with any other vehicles.

The experience with the first shot makes me look forward to February 14 and the second dose. I was impressed with getting this vaccine so quickly and easily. Nationally, only about 6.5 people per 100 have gotten a first dose as of January 24 according to Bloomberg’s Covid-19 tracker. North Carolina is slightly below that mark overall.

Have you tried or plan to try to get a Covid vaccine? What is your experience? I hope more people get vaccinated soon so I won’t feel so guilty about getting one so easily.