Wat Mahathat was built during the 14th century in Ayuthaya, Thailand, the second capital of Siam (Thailand). In 1767, Burmese invaders destroyed the city and its magnificent temples. They vandalized many of the Buddha statues in Ayutthaya by lopping off the heads. The area remained abandoned and overgrown for nearly 200 years. 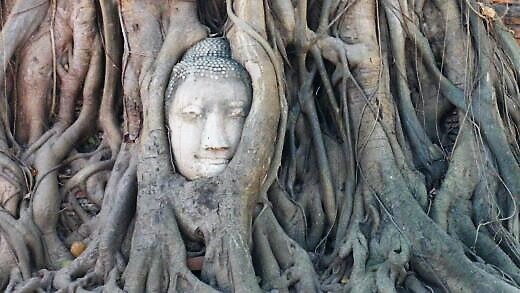 How the Buddha head became entwined in the roots of this banyan tree is one of history’s mysteries. Several theories have been proposed. The explanation I like is the miracle theory: a divine hand caused a tree to grow in a way that lifted the desecrated Buddha image from the ground. It certainly seems miraculous that the tree grew in the exact manner required so image faces forward and is perfectly aligned vertically.

None of the explanatory theories account for the fact that Banyan trees have aerial roots that grow downward. That would appear to make it difficult for growing roots to lift the head from the ground and adds further to the mystery of the Wat Mahathat Buddha head.

Today the stone Buddha head can be seen nestled in the tree roots not far from the entrance of Wat Mahathat.