In May, the distribution and administration of Covid-19 vaccines showed marked improvement.  With a notable exception (the U.S.), the rate of vaccinations increased around the globe.  The goal of world-wide herd immunity through vaccination is still a long way off and scientists are predicting that herd immunity will never be attained.

As of June 6, 2021, the Bloomberg Vaccine Tracker reports that just over two billion doses of Covid-19 vaccines have been administered in 176 countries. That is nearly double the number of doses that had been administered as of May 2. 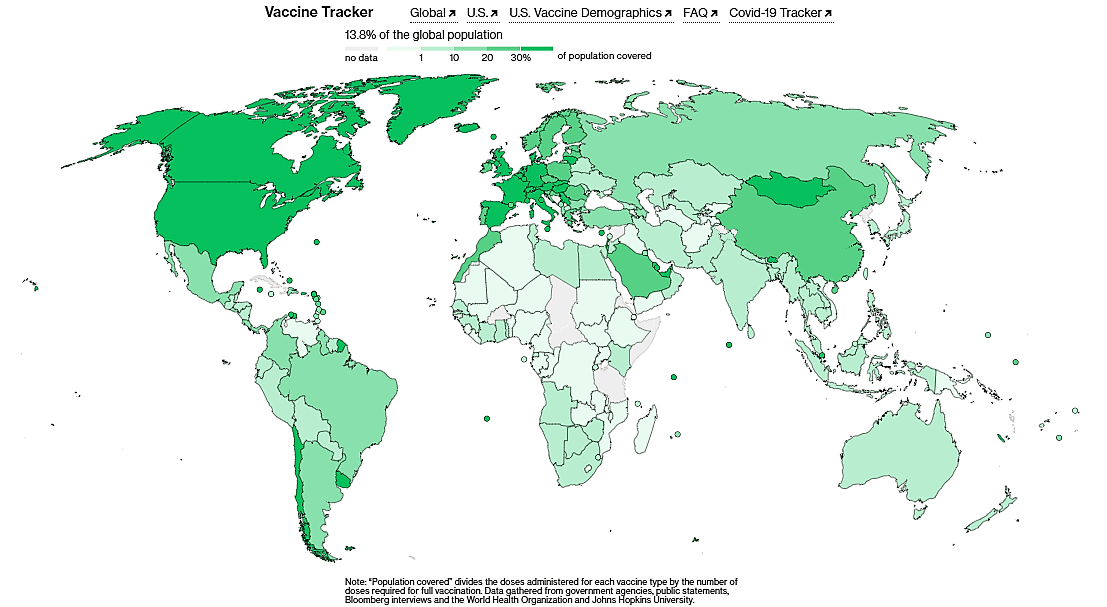 This Bloomberg chart lists countries in order of the total number of vaccines administered.  Use the drop down feature on the original site to see the statistics for every country that has administered vaccines.

In the United States, the rate of vaccine administration rose to 1.03 million per day as of June 6 after falling from just over 3 million per day in March. The total U.S. doses administered stood at 303 million. That is enough to cover 47% of the population.

Vaccination coverage varies widely by state and region. The northeast, upper Midwest and west coast (including Hawaii) lead in terms of percentage of population covered. The southern states of the former Confederacy are generally in the back of the pack and not looking like they will turn things around any time soon. Alabama, for example, has administered doses to cover just 32% of the population, and only 2,094 shots per day are going into arms in the state currently.

The world has done amazingly well to develop effective vaccines in record time, and the the rate of production and administration of vaccines is accelerating. But we are losing the battle for herd immunity. Experts think that 70% to 75% of the population must be vaccinated or otherwise immune through past exposure in order to reach herd immunity where the lack of available hosts blocks the spread of the virus.

At the current pace of 38 million a day, it would take another year to achieve a high level of global immunity. The vaccination rate is steadily increasing, and new vaccine supplies from additional manufacturers are coming to market. In the U.S., President Biden’s goal of having at least one dose to 70% of Americans by July 4 is slipping. In the U.S., the latest vaccination rate is 1,026,482 doses per day. At that pace, it will take another 6 months to cover 75% of the population.

According to an article in Nature published on May 3, there is growing consensus among scientists that herd immunity will never be achieved. The reasons include: (1) vaccines may not preclude transmission, (2) uneven distribution among and within countries and pockets of vaccine hesitancy create the opportunity for the virus to remain active, (3) the longer it takes to stem transmission of the virus, the more likely it is that variants develop that are more transmissible and more resistant to vaccines, (4) immunity through vaccine or infection may have limited duration, and (5) as more people are vaccinated, vaccinated and unvaccinated people will increase their interactions, and that changes the herd-immunity equation, which relies in part on how many people are being exposed to the virus.

To overcome vaccine hesitancy, some states and businesses are offering incentives and some employers require that employees be vaccinated. The State of Ohio lets vaccinated people enter a lottery to win one million dollar prizes or four-year scholarships covering all expenses at state universities. Vaccine rates in Ohio have jumped by 33% since the incentives were announced.

After a year of restrictions on travel, dining, movies and travel people are more than ready to ditch the Covid-19 routine. In the U.S. many states and local jurisdictions have reopened and eliminated mask and social distancing requirements. The Centers for Disease Control and Prevention has given vaccinated people greater freedom to travel.

Many consider the pandemic to be over. It’s not, of course. Even in areas with high rates of protection the virus is like a smoldering forest fire ready to reignite when conditions are right.

Have you changed your behavior because you are vaccinated or because many others are? The change in CDC guidance for vaccinated individuals means I’m traveling a bit again having taken two airline trips in the last two months.