When the Centers for Disease Control finally greenlighted U.S. domestic travel for vaccinated travelers at the begining of April, I started paying attention to some of the fare sales that have been going on. After having been fully vaccinated for more than two months, I was very anxious to travel again.

I found a trip to Denver, Co departing at the end of April for $126. I arrived in Denver in the late afternoon and the return flight left just after midnight. I never left the airport in Denver. It was essentially a flight to nowhere just to see what air travel was worth it under Covid-19 conditions.

Reassured by that flight, I booked tickets for my son and I to Anchorage Alaska through a sale on American Airlines. The rotund trip cost was $350 for each economy class ticket. To a travel-starved blogger that looked like a great deal. The flights to Anchorage were almost long enough to simulate international travel. And the flight from DFW to CLT would be on a widebody aircraft which is unusual for a domestic flight. 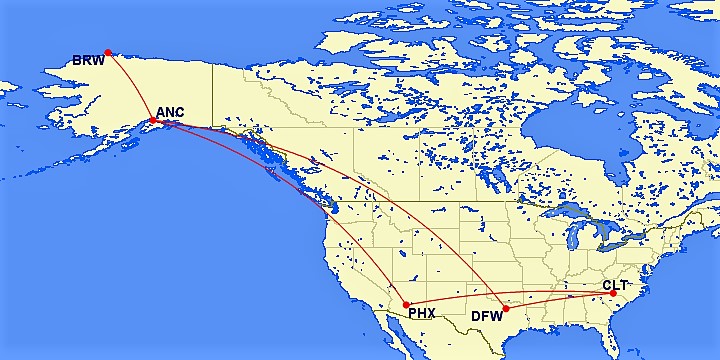 The total distance in air miles for the six domestic flights between Charlotte and Utqiaġvik, AK (BRW) was 9,753 statute miles (15,695 km).

We drove to the airport and ended up parking in a long term lot in the rain because the daily garage was temporarily closed due to construction nearby. We took the shuttle bus to the terminal and stopped briefly at the American Express Centurion Lounge before going to the gate. This lounge opened in 2020 just before the pandemic hit. I reviewed it here and here.

It was a long walk to from the Centurion Lounge to the departure gate, Gate A8.  The walk is aided by several moving walkways and remodeling on the A Concourse that replaced carpeting, over which spinner type carry-ons hate to be pushed, with hard surface flooring.  In this case, it didn’t matter to me because the one-year layoff disrupted my travel habits and I packed the suitcase with the broken extendable handle.  I had to carry the bag.  That made the walk seem even longer. Remember when bags didn’t have wheels and people used to carry their luggage?  The wheel was a great invention for cavepeople and travelers in the jet age alike.

I used two American airlines systemwide upgrades (SWU) to move our seats economy to first class. I had eight systemwide upgrades that were slated to expire in July 2021. SWUs provide the most value when used on international flights to go from economy to business or business to first class if space is available. I made an exception in this case and used two SWUs on the domestic outbound flights to ensure an upgrade for Alex who has no status with American and to use two of them before the July 2021 expiration date even though it seemed likely American would extend the expiration date in light of continued travel restrictions.

As another exception from standard practice, we decided to accept the gate agent’s offer and check our bags at the gate. Probably 98% of the time I never check a bag at check in or at the gate. Gate checking my bag with the broken handle made sense here to avoid lugging it around the airport when we connected in Phoenix.

Boarding was delayed but was eventually completed at 13:00, one minute after the scheduled departure time.  Passengers were very orderly.  Several wore gaiter masks.  Flight attendants gave them standard surgical masks at the boarding door.  There were no complaints or arguments.

Thanks to SWUs our upgrades cleared before the five-day upgrade window for Executive Platinum complimentary upgrades opened.  I chose Seats 1A and 1B.  Those seats are directly behind the bulkhead in first.  They were the only available side-by-side seats in first class.

The advantages of sitting behind a solid bulkhead are no one can recline into your space and there is plenty of room for your knees. The disadvantage of these seats is a lack of legroom. 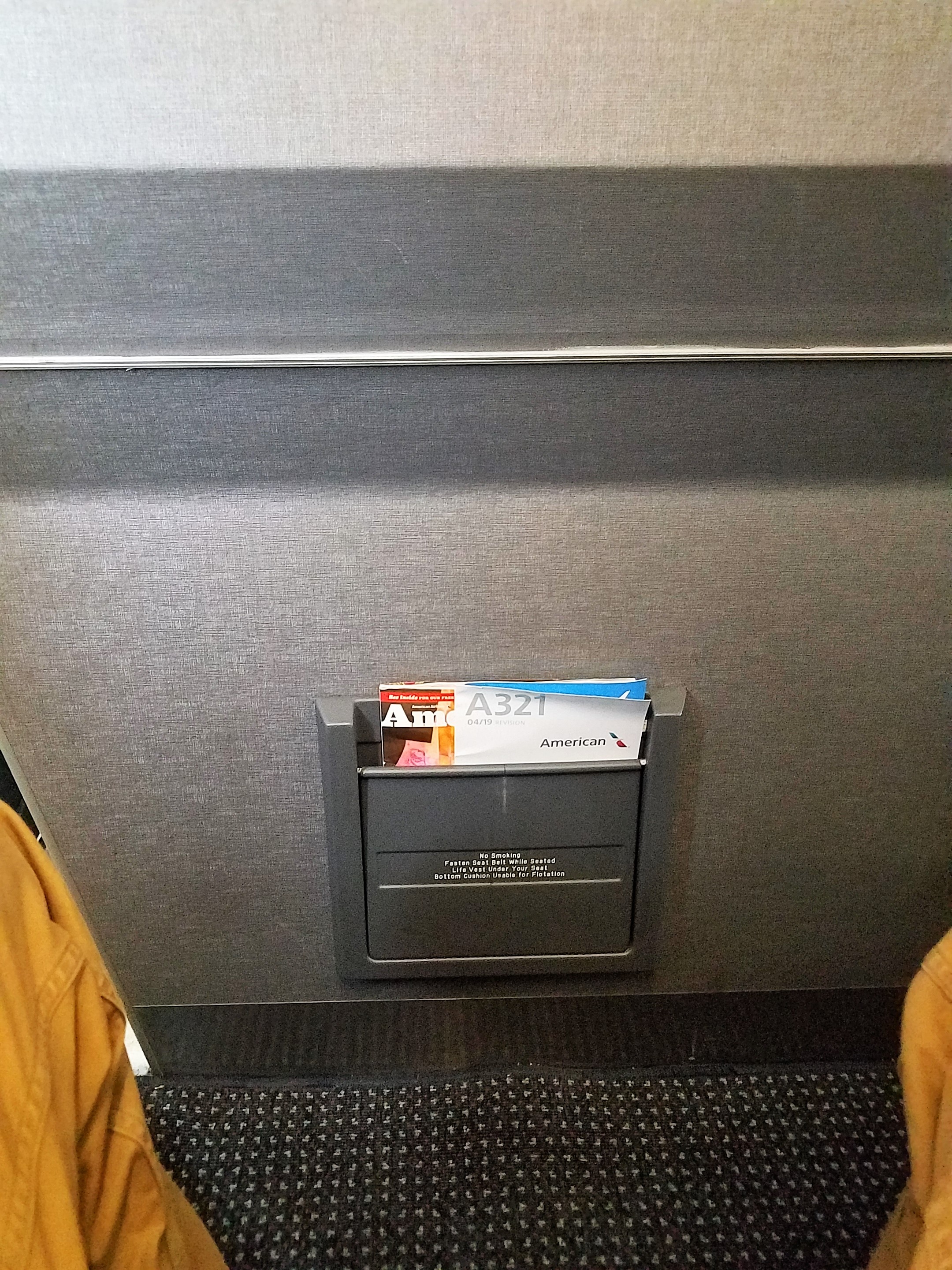 On American A321s, the bulkhead bends a few feet from the floor which affords a couple of extra, much-appreciated inches of room for feet and legs.

As expected, there was no predeparture service. The pilots announced our predicted flight time of four hours and 11 minutes just before taking off on Runway 36C (Three Six Center) at 13:25. The weather was lousy with rain, low clouds and fog.

After leveling at the initial cruise altitude, the flight attendant in first class began what passes as first-class service these days.

I bought a Mobile Klean UV-C light sanitizer to kill SARS-CoV-2 on surfaces people touch during travel but ended up not traveling until after being vaccinated.  Compared to other options, I found that UVC sanitizers work best on things like remote controls, keyboards and electronic devices.  Ordinary sanitary wipes are better on flat surfaces like tray tables.

I wore an N95 mask for much of the flight, but switched to a regular surgery mask for eating and drinking.  The N95 straps that go around your head rather than your ears was a hassle to remove every time I wanted a bite or sip.

American Airlines alcohol beverages have been available in first class throughout the pandemic.  Such beverages  are prohibited in coach domestically.  The attendant on this flight was very thoughtful in his service.  He served a double without asking and opened the Woodford Reserve bottles before placing them on the tray table.

Most people (me for instance) usually have a couple of drinks on a long flight, and serving doubles takes care of passenger needs while also reducing the number of interactions between crew and passengers.  Sometimes opening Woodford Reserve bottles can be a pain.  Hint:  Before twisting pinch the cap until you hear a snap when the metal band on the cap breaks.

We each enjoyed our choices.  The cheese platter on Alaska Airlines was much better I’d learn later.

American A321s (actually USAir A321s acquired through the 2013 merger) have no power.  The USAir management that decided A321s need no power took over at American after the merger and decided to remove seatback video from all domestic narrow-bodied aircraft and replace it with streaming video passengers can watch on their own devices. The flight was pretty boring since I don’t like watching video on my phone or laptop and am not buying a tablet to watch video on airplanes.

The only entertainment was the view as the clouds finally cleared up west of the Mississippi River.

We landed on PHX Runway 26 and parked at Gate A19 at 14:38 local time five minutes later than scheduled.  The flight time was four hours and 24 minutes gate to gate.

After a year, it felt good to be back in the air and actually going somewhere again. Covid-19 has certainly reduced the level of service on board and in the lounge. The cutbacks in domestic first class are tolerable. We had a couple of flights coming up where we could see what it was like flying in coach.

The next post in the series based on our Alaska trip will over the American Express Centurion Lounge in PHX and will include a bonus lounge review as well.

Many are starting to fly and travel again domestically in the U.S. Have you done any travelling under pandemic conditions?