Premium Class is Alaska Airlines’ tradename for its coach seats with extra legroom at the front of the economy cabin. We had purchased roundtrip tickets in economy class between Anchorage and Utqiaġvik (formerly Barrow). I upgraded the outbound trip to first class for $40 each. For the return, I relied on the benefits of American Airlines’ recently renewed partnership with Alaska Airlines for an upgrade to Premium Class.

Other posts from our Alaska trip in May 2021.

Three Days And Zero Nights In Utqiaġvik, Alaska May 2021

Best Things To Do In Talkeetna, Alaska

American and Alaska Airlines recently restored and enhanced their partnership that had been headed for a breakup at American’s insistence. That all changed in the last year.

In 2020, American and Alaska unveiled a new working relationship with reciprocal benefits for members of their frequent flyer programs, and in March 2021 Alaska joined American and 12 other airlines as a member of the oneworld airline alliance.

In this case, the partnership allowed me to select seats in Alaska’s Premium Class just after booking my ticket for a regular economy class ticket. Alaska charges a varying amount for these seats above the cost of a regular coach ticket.  American elites have access to Premium Class seats free of charge in accordance with the chart above.

When flying on Alaska, Executive Platinum and Platinum Pro members of American’s AAdvantage program can upgrade a travelling companion without using the upgrade certificates that would be required if the flight was operated by American.  In that respect, flying Alaska, is even better than being on American.

Alaska Airlines is a medium sized airline that operates principally to serve destination along the Pacific coast of North America, Alaska, Hawaii and Mexico. See the post on the Alaska Airline flight to Utqiaġvik for additional general information about this airline.

A Boeing 737-700 was the equipment on this flight. Alaska uses 737-700s for short-haul flights. Here are the basic aircraft specs from the airline’s website. 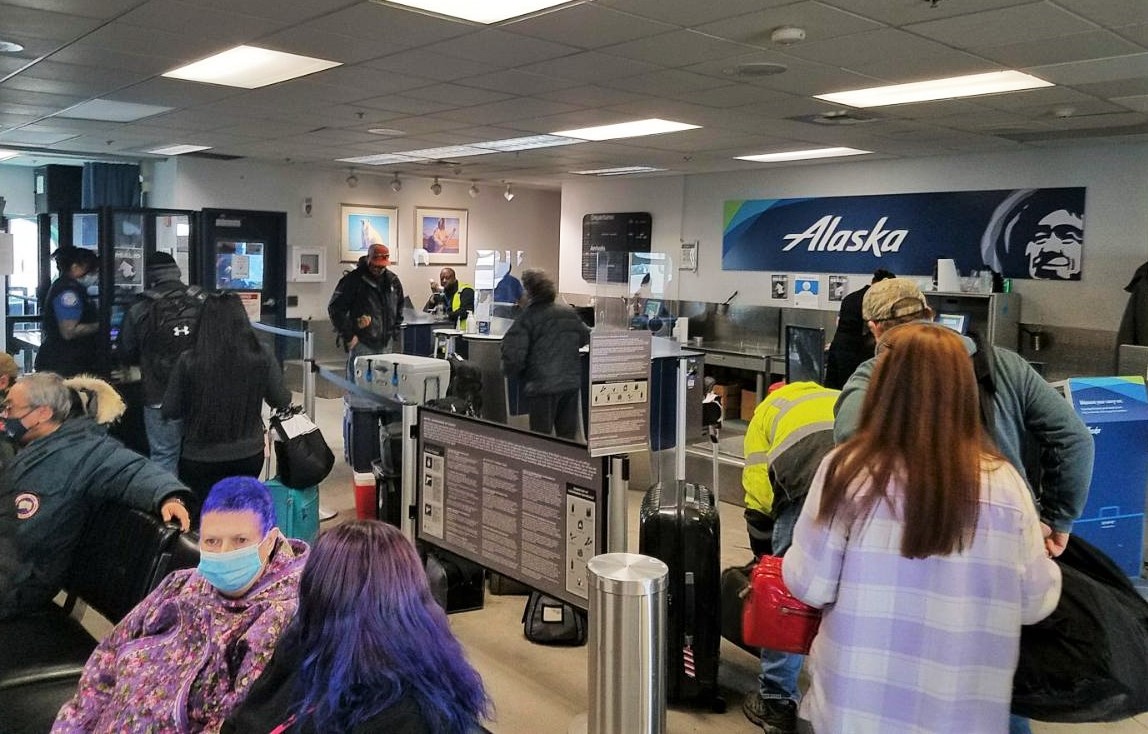 Getting to the airport required only a two-minute walk from the King Eider Inn. The Alaska Airlines terminal is tiny. The good thing about tiny airports is they are easy to navigate. One bad thing in this instance was the gate area was so small that TSA security screening could not begin until the aircraft was ready to board. That caused the boarding process to take considerably longer than normal. Boarding began 30 minutes before the scheduled 12:52 departure time but was not complete until 13:05.

One of the TSA agents was on our flight from Anchorage. He said that TSA assigns people to this station for a three-month rotation and that working for TSA in Utqiaġvik comes with a substantial pay increase while up there. That makes sense because Utqiaġvik has a certain appeal but being 320 miles north of the Arctic Circle and having no road connection to the outside world, it is incredibly isolated.

Boarding was handled with airstairs through the 737’s forward port boarding door.

Premium Class on this aircraft featured comfortable seating that was in excellent condition.  With 35 inches of pitch, these seats have more legroom that first class seats on some Delta Air Lines planes.

Comfort was enhanced by the fact that in May 2021, Alaska was still blocking middle seats in coach.  It was the last U.S. airline to abandon that practice.  Alex and I had a row of three seats to ourselves. 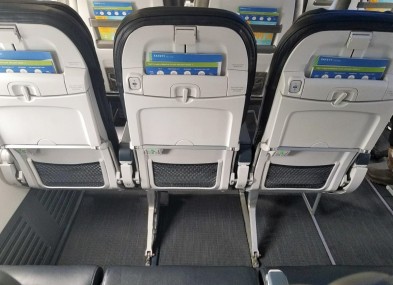 A couple of nice features of these economy seats is the excellent secure cup holder and the tablet holder which can be used for viewing streaming inflight entertainment.

In addition to streaming content to passenger devices, Portable Media Players – digEPlayers – are available on some flights. These media players are available for a fee and may be reserved online. Rentals are free of charge for First Class and Premium Class passengers. We did not request them on this flight. I used an older model years ago. Those personal players are very handy to use instead of a phone, tablet or laptop.

Every Premium class seat has a dedicated usb and a/c power outlet. The availability of power really comes in handy on longer flights especially if using one’s device to watch entertainment or surf the web.

Even though there was no precipitation falling, a deicing solution was applied to the aircraft while we were on the ramp. That is a safety procedure I never object to even if it appears unnecessary. Ice on an airplane can add a lot of weight and disrupt the airflow over the wings which could result in the aircraft being unable to generate sufficient lift to remain airborne.

The flight departed for Anchorage at 13:41 nearly an hour late. Nevertheless, it is impressive that despite the challenges of operating a number of flights from small airports and in areas with notoriously bad weather at times, Alaska is able to maintain some of the best stats in the USA for on-time performance.

The expected flying time was one hour and 43 minutes. The flight attendants began service 15 minutes after takeoff while we were still climbing to the assigned Flight Level 390 (39,000 ft) cruise altitude.

Here’s what you can expect for food and beverage service on Alaska airlines in first class, premium class or economy for flights of various distances. As far as beverages, the only difference is economy passengers must pay $7.50 for alcohol that is free for first class and premium class. 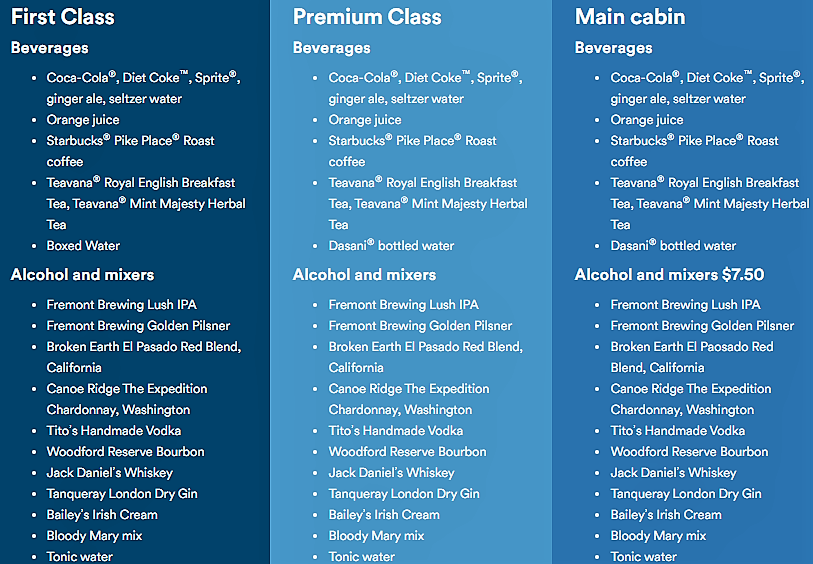 Food options are summarized in this table. The columns from left to right correspond to first class, premium class, and economy class. 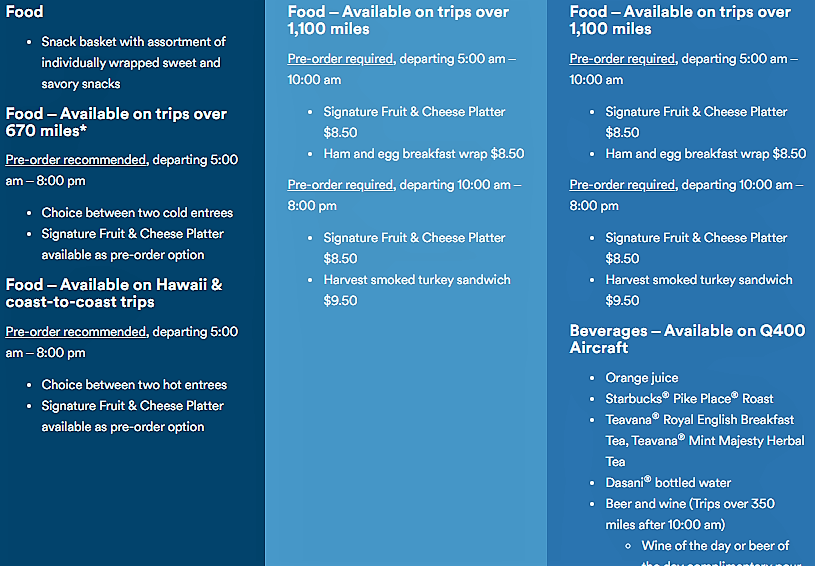 I had the fruit and cheese platter and there was no charge. According to the chart, in premium class cheese platters should cost $8.50 and not be available on flight of less than 1,100 miles (1,770 km).

The flight attendants later offered a snack and drink refills. 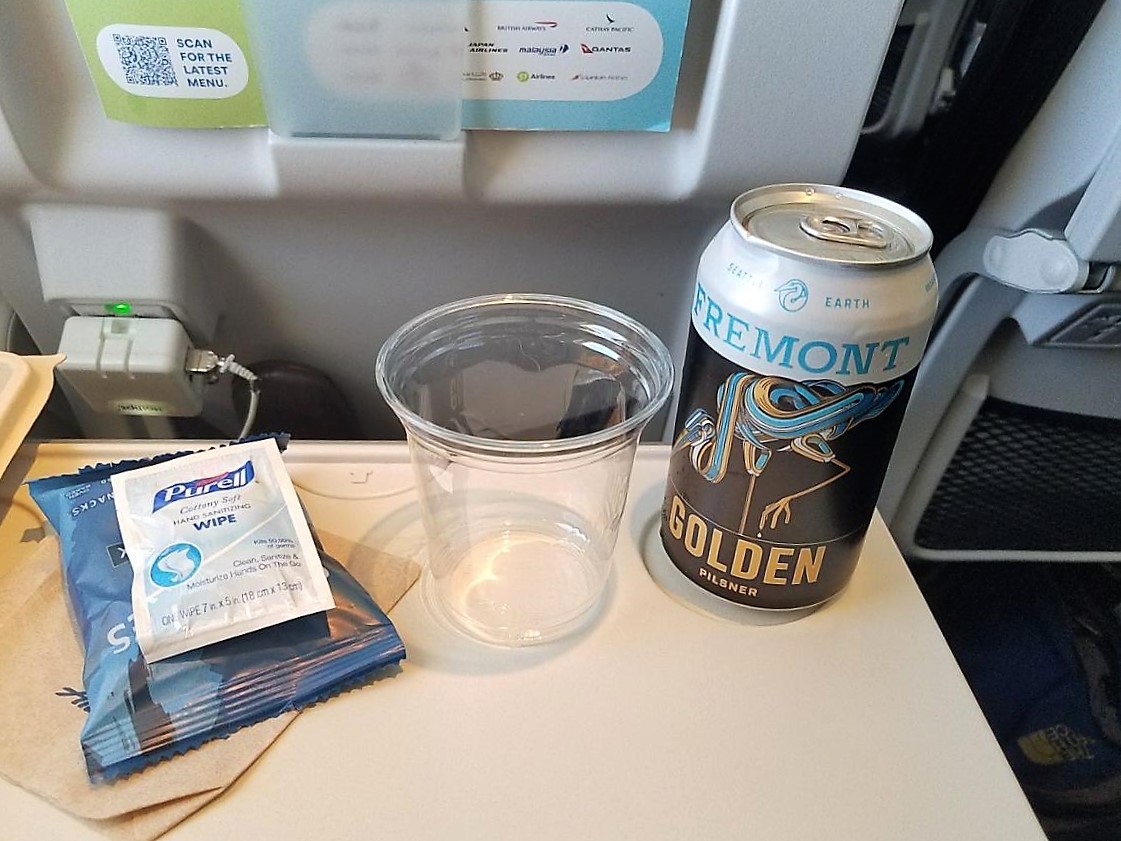 The flight was only about 25% full. So it was easier than normal for the flight attendants to deliver Alaska’s friendly and efficient service that ranks at the top of U.S. carriers along with Delta.

Tiny lavatories in economy are the latest airborne torture chambers in the name of being able to shoehorn in more seats. Anyone over six feet (189 cm) tall or with a waist in excess of 30 inches (76 cm) will some difficulty using these facilities.

The landing approach began an hour and 20 minutes after takeoff.

We parked at Gate C2 at 15:02.  Keeping track of the arrival time at the gate is worth it on Alaska Airlines because if luggage is not delivered within 20 minutes of deplaning, you are entitled to a modest credit for future travel or a few thousand frequent flyer miles.

It was reassuring to see that this airport aIso believes in the benefits of disinfecting surfaces with ultraviolet light. 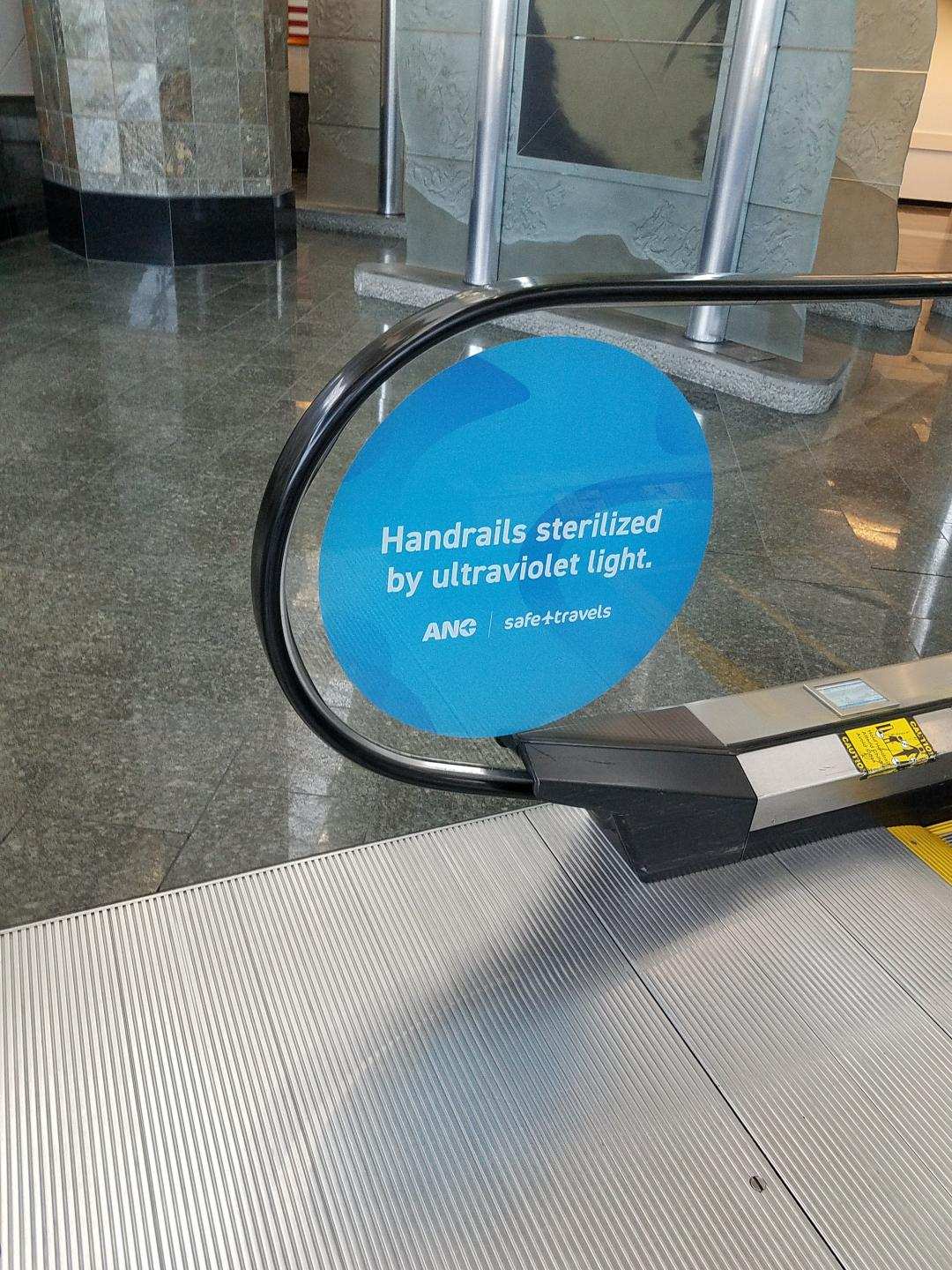 I very much enjoyed this short flight. The extra legroom of premium class was much appreciated as was having a blocked middle seat. Even though Alaska Airlines is not blocking middle seats now, free drinks, 35 inches of pitch, and clean, modern seats with secure cup holders, tablet holders and multiple power outlets make its extra legroom economy section the best of any U.S. airlines. The benefits conferred on American Airlines frequent flyers from Alaska Airlines membership in the oneworld alliance and expanded partnership with American Airlines and being able to earn credits toward retaining American Airlines status while flying Alaska mean I will choose Alaska for air travel whenever possible.