Some of the photos on the flightseeing flights in the Alaska Range produced curved, distorted images of the propellers. The planes used, de Haviland Canada DHC-3 Otters, have four-blade props with straight blades.

You probably noticed that some photos turned out like this.  I was surprised and puzzled. 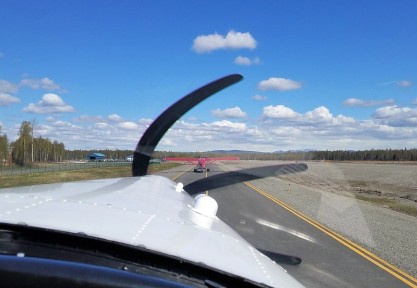 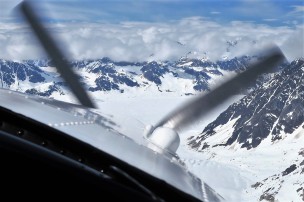 I learned the cell phone camera uses a  metal–oxide–semiconductor (CMOS) sensor in the lens. CMOS is commonly called a rolling shutter. It takes a picture by reading in an image progressively in horizontal slices instead of all at once.

Normally, the effect of this rolling shutter is unnoticeable. I hadn’t seen it in the four years that I’ve had the cell phone. Only when taking a picture of something that’s moving as fast as a propeller, that lag time becomes noticeable and shows up as weird distortion.

To avoid the effect, use a camera with a more expensive charge-couple device (CCD) sensor in the lens. Or use a high shutter speed with a CMOS sensor. The Cannon G9X also has a CMOS sensor but the fast shutter speed avoided the distortion.

I wish I could say the distortion was a clever trick.